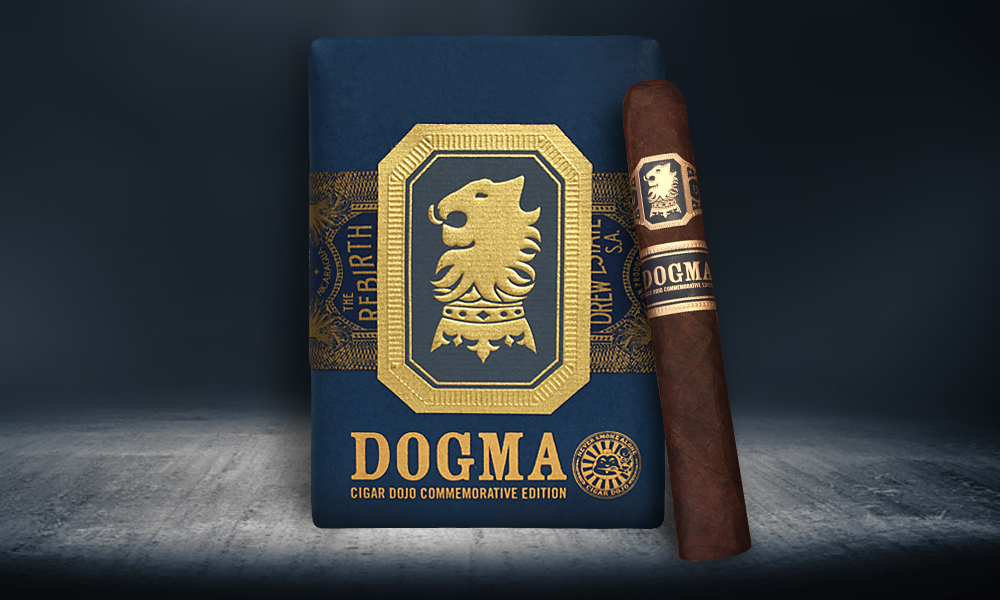 At the 2019 IPCPR Trade Show, Drew Estate will unveil the Undercrown Dogma to Drew Diplomat retailers. As a part of the release, it will include a new packaging design featuring blue-colors soft bundles and corresponding sales trays.

The Dogma was first released in 2014 as a small batch limited production sold initially through Smoke Inn. It’s a  6 x 56 Box Pressed Gran Toro that features a San Andres Mexican wrapper, Connecticut Stalk Cut Habano binder, and a combination of Nicaraguan and Brazilian Mata Fina filler. Dogma is based off the Undercrown Corona ¡Viva!, a slightly tweaked version of the original Undercrown line.

In a press release President and Founder Jonathan Drew notes, “It was definitely cool to bring back the Dojo Dogma last year at IPCPR. I received a bunch of texts and dm’s from all sorts of dudes that I’ve met throughout the years, all really amped up to see it back. We screwed up though last year because the soft packs did not have a sales tray so the marketing guys fixed it real nice, plus yo… the blue pack is super dope.”

Eric Guttormson owner of Cigar Dojo added, “To this day the DOGMA has been our most popular collaborative cigar release and for good reason. It has just the right size and shape combined with a killer blend that keeps folks coming back for more.”

While the cigar itself will be unveiled at the 2019 IPCPR Trade Show, the official launch will take place August 24th, at the Rocky Mountain Cigar Festival in Broomfield, Colorado followed by a national rollout in September.