For many years AJ Fernandez produced cigars for the Diesel brand for Cigars International and its distribution arm Meier & Dutch, owned by General Cigar’s parent company Scandinavian Tobacco Group. In 2017, the Diesel brand was moved into General Cigar’s portfolio as a brick and mortar line. Justin Andrews took over as the brand manager and has spearheaded the growth of this brand. After moving the Diesel Grind in, the first Diesel Whiskey Row was released last year. This was followed by the limited edition Diesel Hair of the Dog, and now Diesel Whiskey Row Sherry Cask.

Without further ado, let’s break down the Diesel Whiskey Row Sherry Cask Robusto and see what this cigar brings to the table.

As mentioned it is the Brazilian Arapiraca wrapper that is the “secret sauce” to the Diesel Whiskey Row Sherry Cask. This binder is combined with a Nicaraguan Habano filler. The cigar is finished with a Connecticut Broadleaf wrapper. The cigar is produced at Tabacalera AJ Fernandez in Estelí, Nicaragua.

The Diesel Whiskey Row Sherry Cask is offered in three sizes – each presented in 20-count boxes. 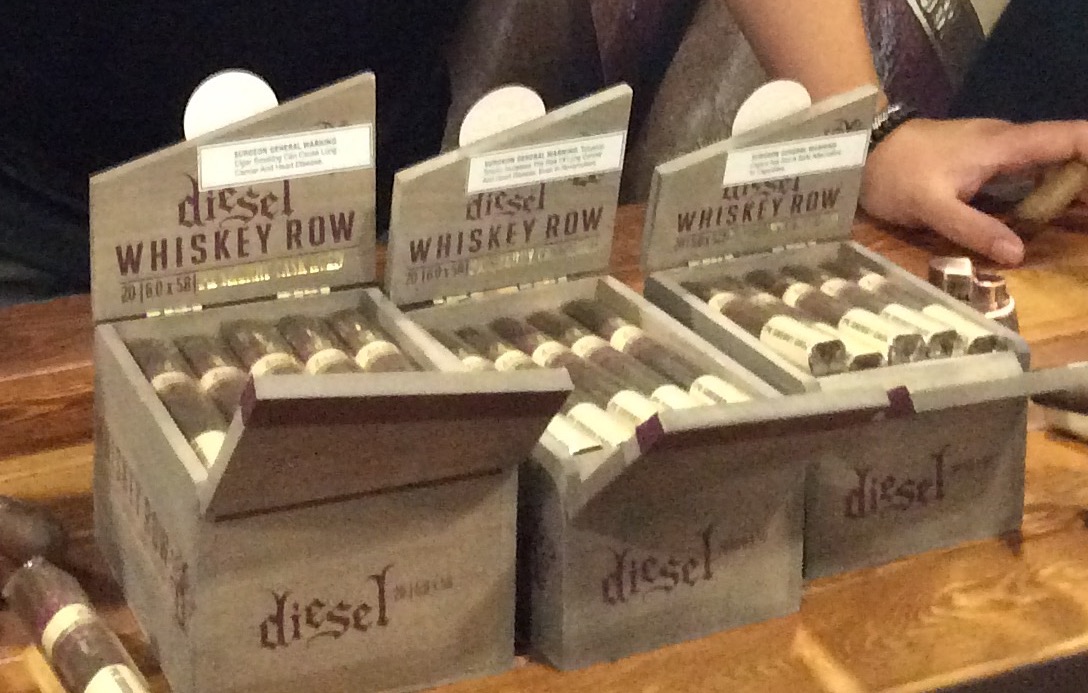 The Connecticut Broadleaf wrapper of the Diesel Sherry Cask Robusto had a milk chocolate color to it. There was some oil on the surface. The dark color of the wrapper did a nice job at hiding the wrapper seams. While there were some veins, this was still a relatively smooth wrapper surface for a Broadleaf wrapper. 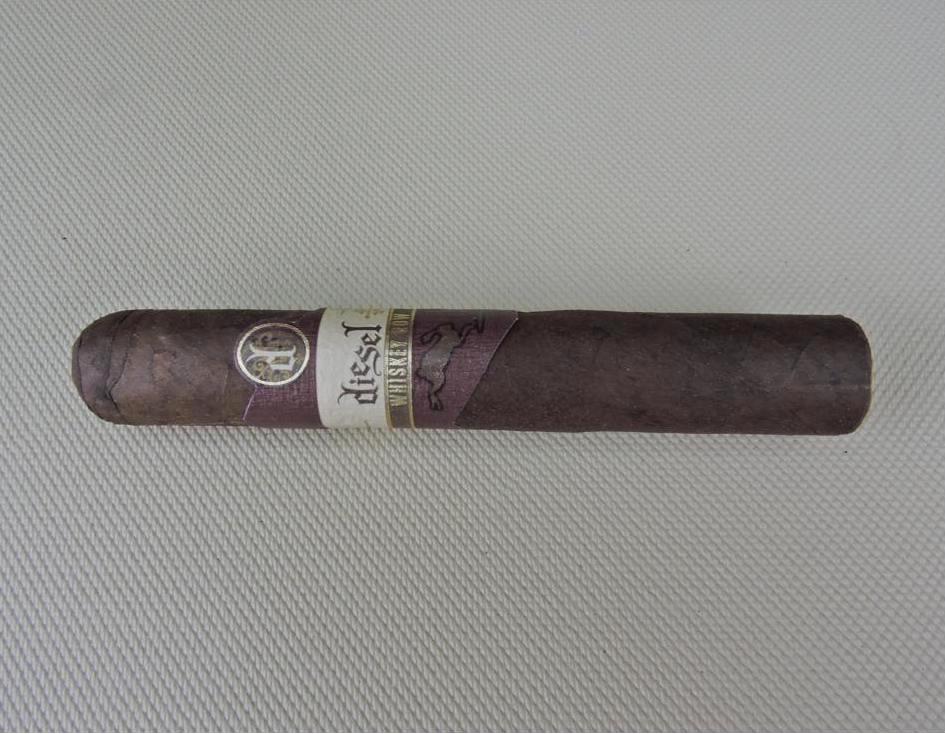 There are two bands on the Diesel Whiskey Row. I was a big fan of the original Whiskey Row band design and I like the Sherry Cask band even better. The primary band has an irregular shape with a Burgundy, beige-brown, and gold color scheme. The top and bottom of the band have a thick Burgundy trim. The upper part of the band features a small brown circular field with gold trim. On the center of the band is a classic styled “D” in beige font. A beige-colored stripe sits second from the top with the “diesel” logo text in brown font. Third from the top is a brown stripe with gold trim. On that stripe is the text “WHISKEY ROW” in gold font. Finally on the lower Burgundy stripe is a silhouette of a rabbit.

A secondary band covers the circumference around the footer. This is a large band with a beige-colored background. On that band is the “Rabbit Hole” logo text surrounded by the text “DIESEL WHISKEY ROW BARREL AGED” arranged in a circular gold font. To the left of the band is the text “RABBIT HOLE” in a large gold stencil font with the text “PK SHERRY CASK” in a dark font arranged in landscape mode.

A straight cut was used to remove the cap of the Diesel Whiskey Row Sherry Cask Robusto. Once the cap was removed, it was time to proceed with the pre-light draw. The dry draw delivered notes of wine sweetness, earth, chocolate, and slight spice. I thought the power of suggestion was overcoming me, but Andrews told me that the sherry influence on the binder was much more prominent than the original Whiskey Row.  I considered this to be an excellent pre-light draw. At this point, it was time to light up the Diesel Whiskey Row Sherry Cask Robusto and see what this cigar would bring to the table.

The Diesel Whiskey Row Sherry Cask Robusto started out with more notes of chocolate, wine-sweetness, earth, and white pepper notes. Early on the chocolate notes became primary. The wine sweetness was a close secondary note with the earth and pepper notes more distant. Meanwhile, there was a combination of red and white pepper on the retro-hale.

By the last third of the Diesel Whiskey Row Sherry Cask Robusto, the earth and pepper notes remained in the forefront. The earth notes maintained a slight edge throughout this stage of the smoke. Meanwhile, the chocolate and wine-sweetness diminished further, but did not dissipate. This is the way the Diesel Whiskey Row Sherry Cask Robusto came to a close. The resulting nub was firm to the touch and cool in temperature.

Burn-wise, the Diesel Whiskey Row Sherry Cask Robusto scored very nicely. This is a cigar that maintained a straight burn path and had a straight burn line without any excessive touch-ups. The resulting ash was firm with a salt and pepper color. The burn rate and the burn temperature were both ideal. 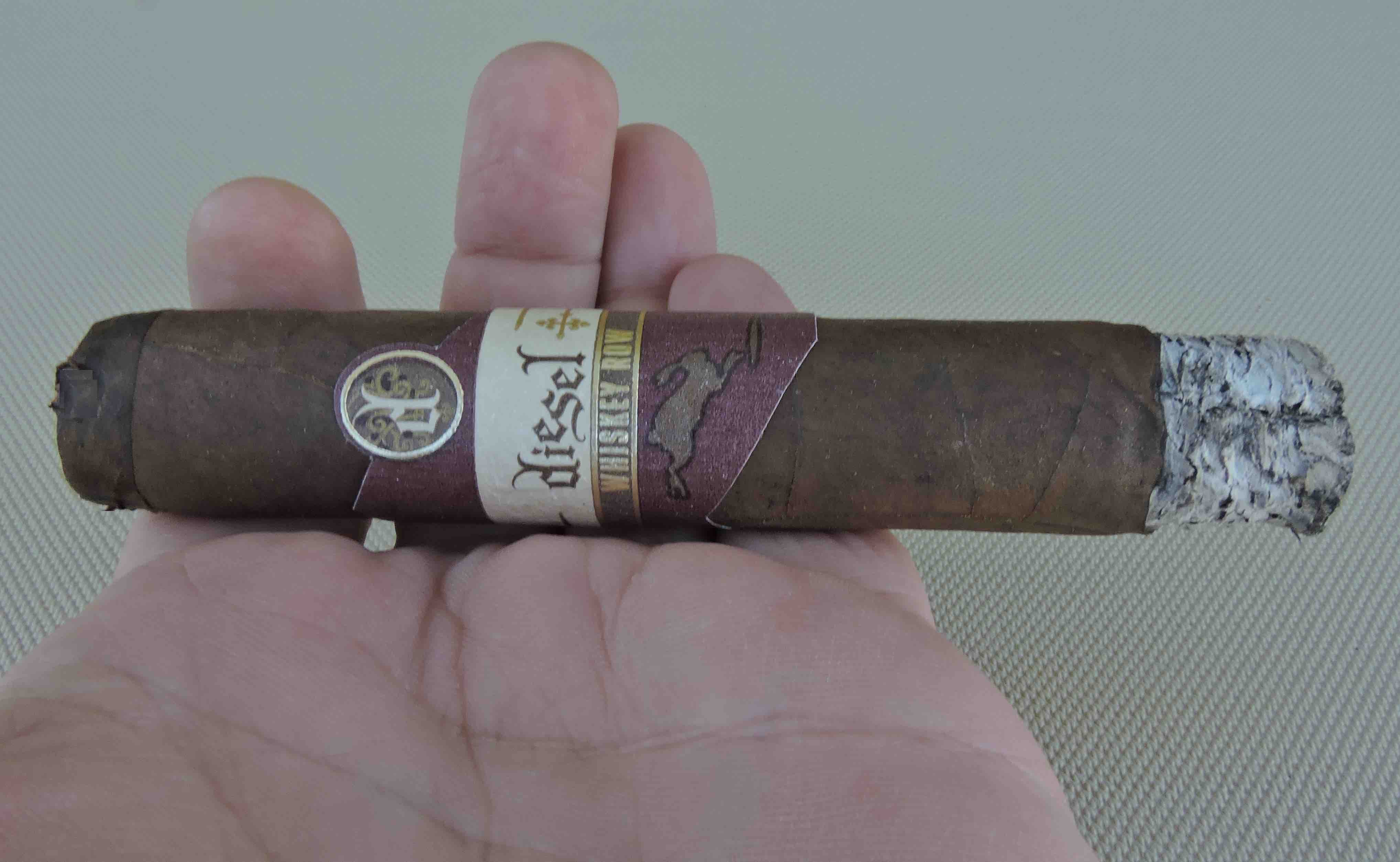 The Diesel Whiskey Row Sherry Cask Robusto also scored nicely on the draw. This cigar had a pleasant touch of resistance. At the same time, this was a low maintenance cigar to derive flavor from.

I classified the Diesel Whiskey Row Sherry Cask Robusto as a classic medium cigar. This is a cigar that was both medium in strength and medium in body. There wasn’t much in the way of variance in the intensity levels of both the strength and body. At the same time, both attributes balanced each other nicely with neither attribute overshadowing the other.

One thing that stands out is the influence the tobacco aged in the sherry barrels has on this blend. Because it is the binder component that undergoes aging in the sherry barrel, there is no doubt the binder plays a key role in this cigar. In the end, I found this to be an excellent complement to some of the more traditional flavors produced from this Connecticut Broadleaf blend. This is a cigar I could recommend to an experienced cigar enthusiast or even a novice looking for something in the medium/medium plus range in strength and body. As for myself, this is a cigar I would smoke again – and it’s one that certainly is worthy of purchasing multiples for your humidor.