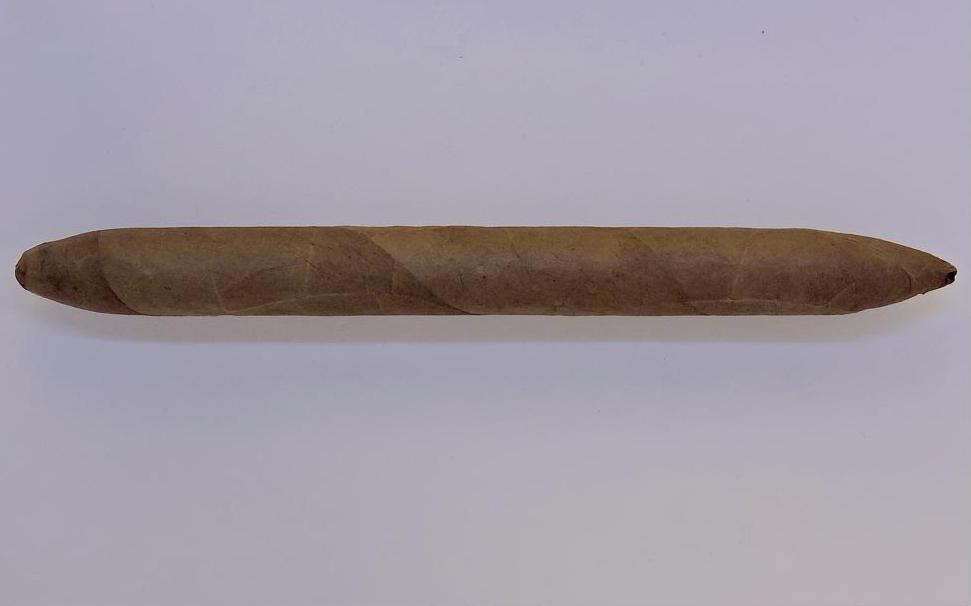 Back in 2006, Davidoff celebrated what would have been the 100th birthday of company founder Zino Davidoff. To commemorate the occasion, there were three special cigars released: Diademas Finas (6 3/4 x 50), Robusto (5 x 50), and Diademas 100 (9 1/8 x 55). As we have seen in the past couple of years with Davidoff, what’s new is actually what’s old. With a rich history of limited offerings and the challenge of releasing new products due to U.S. Food and Drug Administration regulations, Davidoff has been reaching back into its past and re-releasing many previous cigars. Last year, the Diademas Finas was re-released as a signature release for Davidoff’s 50th anniversary. Earlier this year, a the Diademas 100 made a return in the form of a limited release under the Davidoff Vault Series. Today we take a look at the re-release of the Diademas 100.

The Davidoff Vault Series is more or less an agile, limited edition small batch series that allows Davidoff to release discontinued, private, “lost”, or re-released limited edition cigars. Under this series, Davidoff has sold allocations in this series directly to consumers (through its online store) or through select appointed merchants. At press time, the following releases have been incorporated in the Vault Series:

One side note, while we normally use two cigars for an assessment, a single cigar was used for the assessment of the Davidoff Diademas 100.

Without further ado, let’s break down the Davidoff Diademas 100 and see what this cigar brings to the table.

The blend to the original Davidoff Diademas 100 was never officially disclosed, however for the re-release, Davidoff has opted to do so. It’s unknown whether the blends are identical or not.

The Diademas 100 is a massive 9 1/8 x 55 perfecto-shaped cigar. For the re-release, Davidoff has opted to release each individual coffins.  Davidoff has made the coffins available in simple ten-count cardboard boxes. 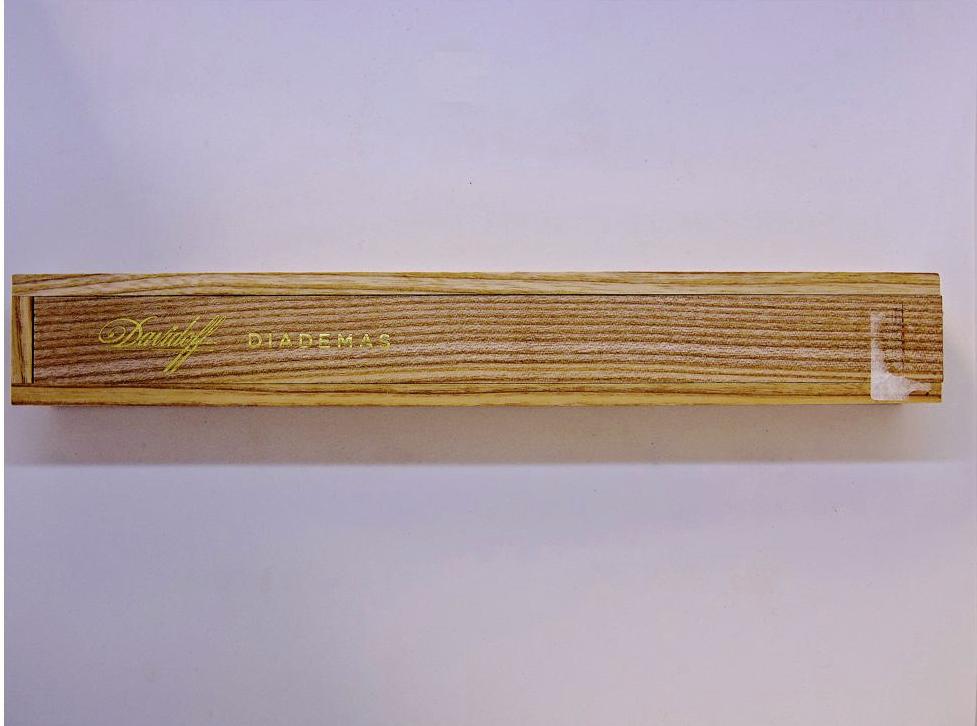 Coffin packaging of the Davidoff Diademas 100

The Ecuadorian Habano wrapper of the Davidoff Diademas 100 had almost a caramel color to it. There wasn’t much in the way of oil on the surface of this wrapper. There are some visible veins and some visible wrapper seams, but on such a large cigar this is to be somewhat expected and in the end, this was still a relatively smooth wrapper.

The diadema shape had a gentle taper with a slightly rounded tip. There was a sharper taper near the footer. The footer itself is open.

A straight cut was used to cut the tip of the Davidoff Diademas 100. A cut was made into the 36 to 38 ring gauge in order to get some of the effect of the tapering of the cigar. From that point, it was on to the pre-light draw stage. The dry draw delivered notes of generic wood, cedar, natural tobacco, and a floral component. For me, this wasn’t the most satisfying pre-light draw. Since the pre-light draw is not incorporated into the scoring, there is no loss of points here. At this point, it was time to light up the Davidoff Diademas 100 and see what the smoking experience would deliver.

Once I reached the shoulder of the cigar, the natural tobacco remained primary but lost some of the sweetness. There was an increase in the hay notes. In addition, some earth and black pepper notes emerged on the tongue. The earth notes increased in intensity and by the end of the first third, the earth and hay joined the natural tobacco in the forefront.

As the Davidoff Diademas 100 moved into the second third, the earth and hay notes took over as the primary note. The natural tobacco diminished into a secondary note. By this point, there was a slight bitter component to the natural tobacco. The pepper notes remained in the background and there was also the emergence of some cedar.

By the last third, the pepper notes increased in intensity. The earth and hay remained in the forefront, but the pepper never quite made it out of being a secondary note. There were still notes of natural tobacco and cedar that rounded out the flavor profile. This is the way the Davidoff Diademas 100 came to a close. The resulting nub was slightly soft to the touch and cool in temperature.

The burn to the Davidoff Diademas 100 performed quite well. The cigar maintained a relatively straight burn line and straight burn path from start to finish. The resulting ash remained on the full side and had a salt and pepper complexion to it. The burn temperature remained ideal. As for the burn rate, the cigar-smoking time of the Davidoff Diademas 100 was 2 hours and 51 minutes – slightly faster than I would expect a cigar measuring 9 x 55. 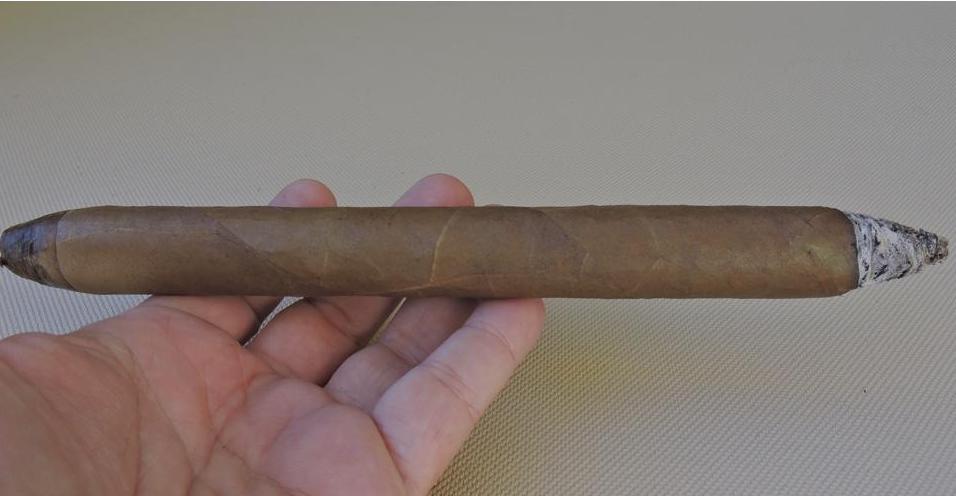 Burn of the Davidoff Diademas 100

One reason for the quicker smoking time is that this cigar did have a draw skewed toward the open side. Given this is a large cigar, I can understand making this cigar a little looser when it came to draw. Still, I did find the draw slightly more open than I prefer.

In terms of strength, I found the Davidoff Diademas 100 to be a constant medium from start to finish – with little in the way of variance. As for the body, the Diademas 100 started out medium to full. Once the cigar burned past the nozzle, the body settled to medium. By the last third, there was an uptick in the depth of the flavors and the Diademas 100 once again moved back into medium to full territory.

On a side note, if you are going to sell ten-count boxes in coffins for $750.00, I think the box presentation needs to be a little more special than just a generic box. In the end, that’s Monday Morning Quarterbacking and this didn’t have an impact on this cigar’s performance in terms of score.

This is a cigar I could certainly recommend to any cigar enthusiast. At $75.00, it’s a financial commitment, but its a cigar you certainly would want to try. As for myself, I can see myself buying another one of these before they disappear from the shelves.