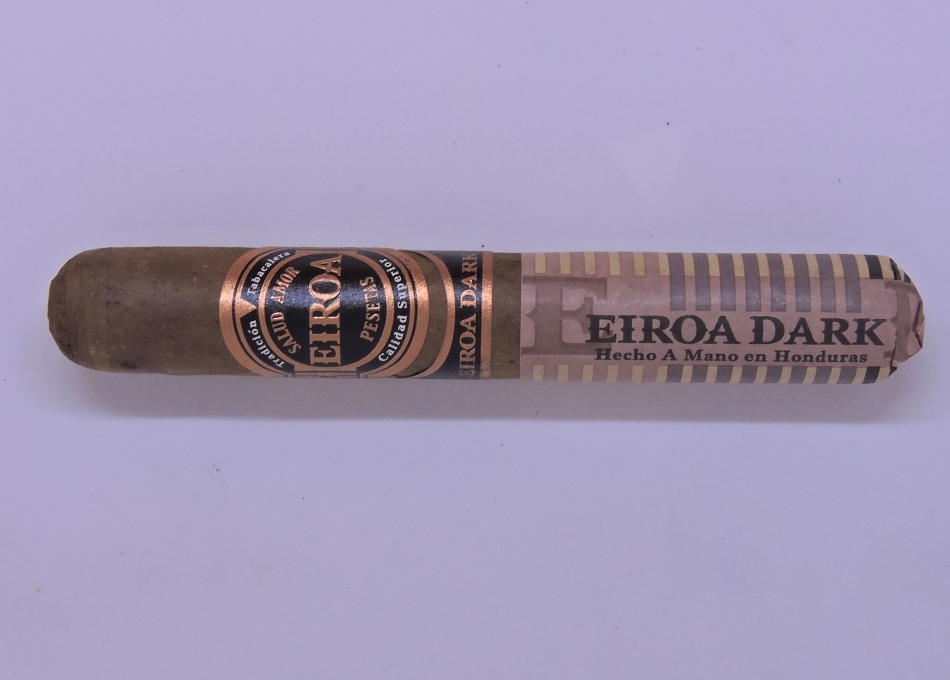 Earlier this year, Christian Eiroa and C.L.E. Cigar Company announced a pair of cigars to be released under its Eiroa brand. These cigars were the Eiroa Jamastran and the Eiroa Dark. Both cigars were Honduran puros featuring authentic corojo leaf grown from the Eiroa family’s farm. Both cigars are positioned as having high priming wrappers, but the difference is (as the name indicates), the Eiroa Dark uses a very specific darker shade of corojo that the company says is available in limited quantities. Today, we take a closer look at the Eiroa Dark in the 50 x 5 (Robusto size).

The Eiroa brand was launched in 2013 – one year after Christian Eiroa returned to the cigar business with the launch of C.L.E. Cigar Company. At the time, Christian Eiroa created the brand to pay homage to his family which has had over a century of experience in the cigar industry. Since the release of the first Eiroa branded cigar in 2013, the brand has grown to six regular production lines and has also become most premium brand in the C.L.E. Cigar Company portfolio.

Without further ado, let’s break down the Eiroa Dark 50 x 5 and see what this cigar brings to the table.

As mentioned, the Eiroa Dark consists of 100% Authentic Corojo tobaccos grown by the Eiroa family on their farms in the Jamastran Valley of Honduras. As mentioned, the cigar features a darker-hued wrapper. Authentic Corojo originates from the original Cuban seeds. It is a leaf that is susceptible to disease and as a result, it started to vanish from the market. Today many growers have opted to use a hybridized seed that is more resistant to disease. Using a series of innovations to mitigate risk of disease, the Eiroas have been able to resurrect the Authentic Corojo leaf. It is a tobacco that is a staple for Christian Eiroa’s C.L.E. Cigar Company brands as well as Christian’s brother and father’s J.R.E. Tobacco Company brands.

The Eiroa Dark is available in three sizes. Each is presented in 20-count boxes. 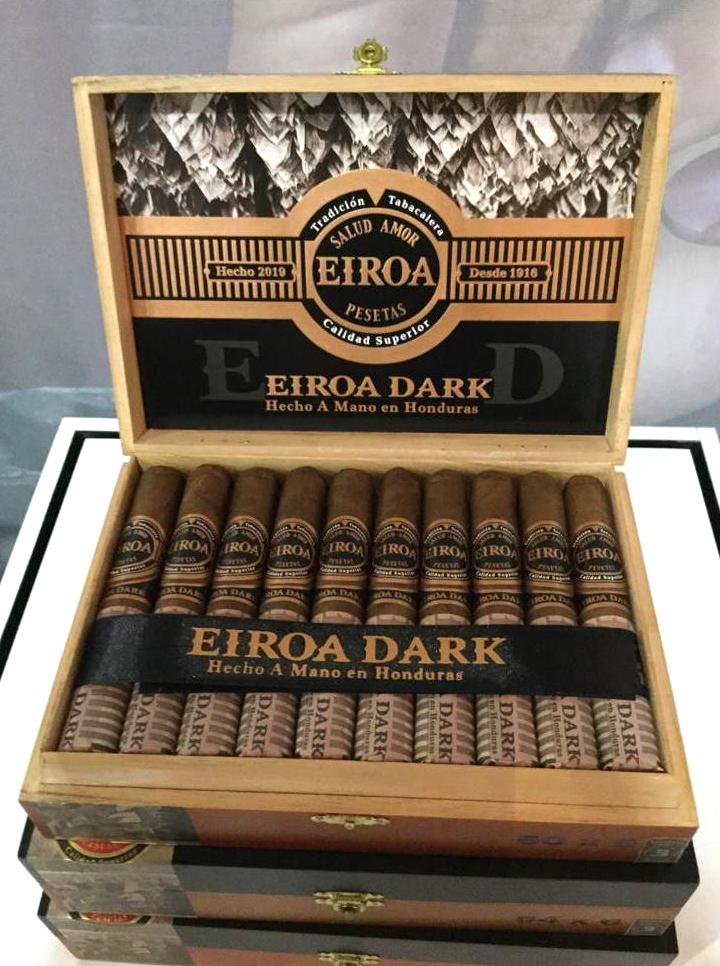 Packaging of the Eiroa Dark by C.L.E. Cigar Company

The wrapper of the Eiroa Dark 50 x 5 isn’t a super dark oscuro, but relatively speaking it is still darker than most of the non-maduro wrappers found in the Eiroa brand. This wrapper has more of a medium brown color without a reddish hue. Upon closer examination, there was some darker mottling on the surface of the wrapper. There wasn’t much in the way of oil on the wrapper. While there were some thin visible veins and visible wrapper seams, this was still a wrapper on the smoother side. 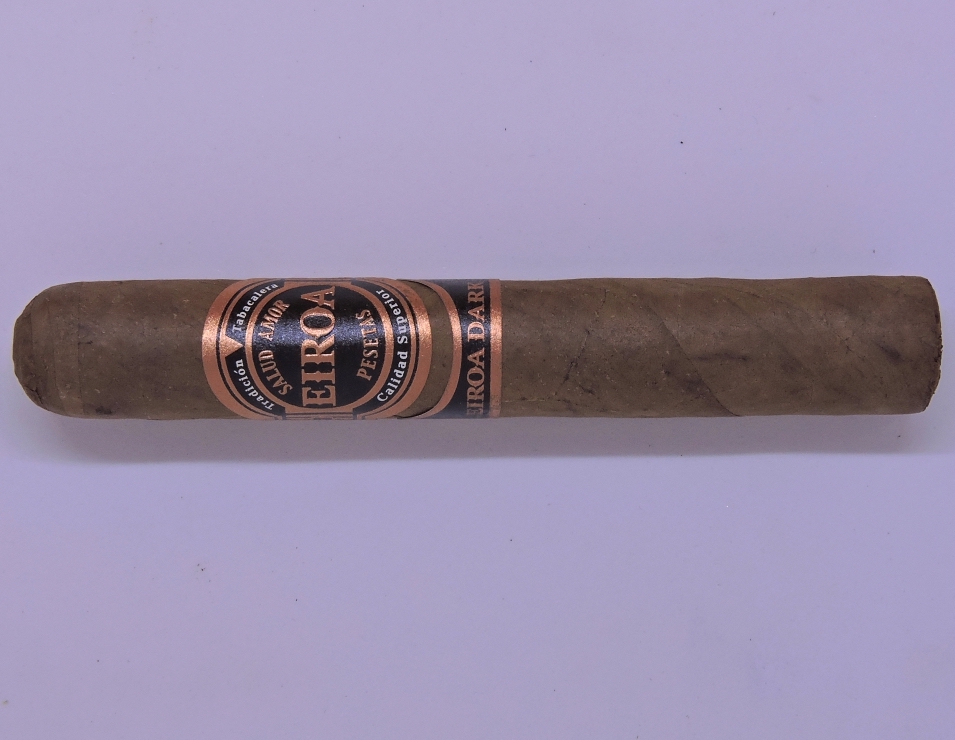 The Eiroa Dark features two bands. The primary band is a variation of the original EIROA band with a black and copper scheme. The upper part of the band has a black circle with copper trim at the center of the band. On the center of that circle is the text “EIROA” in large copper font. Surrounding the “EIROA” name are the words “SALUD”, “AMOR”, and “PESATAS” in a smaller copper font. Sitting on that background above the circle is the text “Tradicion, Tabacalera” in white font. Below it is the text “Calidad Superior.” The left and right side of the band has copper and black vertical striping. On each of the stripe patterns is a black rectangular nameplate design with the text “DESDE 1916” etched on copper.

There is a secondary band resting just below the primary band. The secondary band has a circular wedge on the upper portion that is almost meant to interlock with the primary band. This band has a black background on the center with the text “EIROA DARK” in copper font. There is copper and black vertical striping on the left and right side of this band.

C.L.E. Cigar Company brands are known for the use of tissue paper in lieu of cellophane to protect the cigar (Christian Eiroa has stated he is not a fan of cellophane). The Eiroa Dark features a tissue paper sleeving covering the lower half of the cigar. On the tissue paper is some thick striping that is more gray toward the top and more black toward the bottom. There is a large “E” in gray arranged in landscape mode toward the upper part of the sleeve. The text “EIROA DARK Hecho a Mano En Honduras” appears in black front arranged in landscape mode toward the center of the sleeve.

After removing the sleeve of the Eiroa Dark 50 x 5, a straight cut was used to remove the cap and commence the cigar experience. The dry draw yielded a mix of natural tobacco, earth, and baker’s spice. Overall, this was a satisfactory pre-light draw experience. At this point it was time to light up the Eiroa Dark 50 x 5 and await what the smoking experience would have in store.

As the Eiroa Dark 50 x 5 moved through the second third, the natural tobacco and baker’s spice alternated in intensity as to which note had the edge. At times the grapefruit citrus quality of the natural tobacco varied as well. The pepper, nut, and earth remained in the background, however as the cigar moved into the latter part of the second third, there was an increase in the pepper notes.

The last third still saw the combination of baker’s spice along with the natural tobacco and grapefruit citrus sweetness vary at different degrees. The pepper notes closed into the forefront, but never quite made it there. At this point, there still were some earth notes, but the nut flavors dissipated. This is the way the Eiroa Dark 50 x 5 came to a close. The resulting nub was firm to the touch and cool in temperature.

While there was a slight amount of curvature on the burn line, the Eiroa Dark 50 x 5 had no problems maintaining a straight burn path. The resulting ash was firm with a near-white color to it. The burn rate and burn temperature both maintained ideal levels. 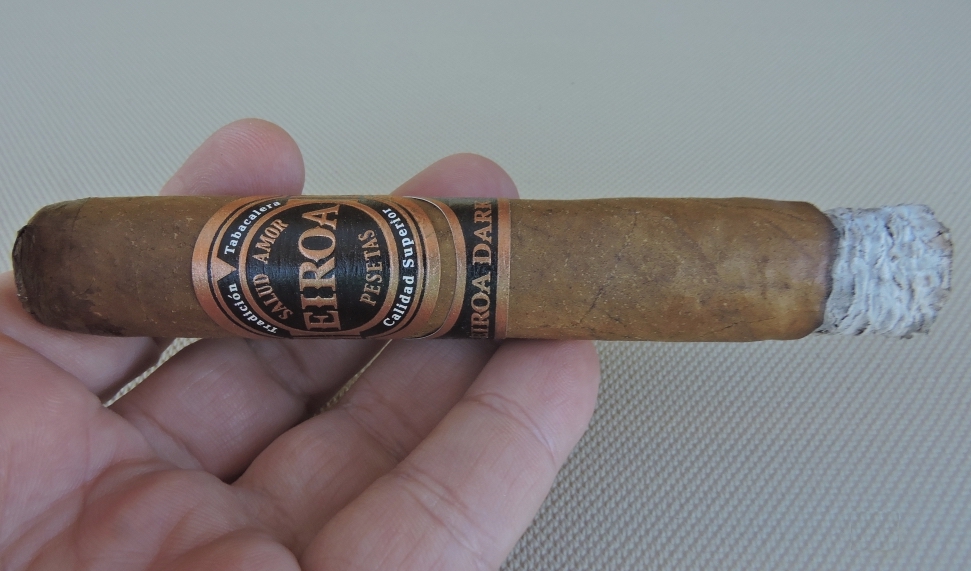 The draw of the Eiroa Dark 50 x 5 performed at an excellent level. This was a draw that had a touch of resistance – something that I have said many times is a positive when it comes to a draw. At the same time, this was a low maintenance cigar to derive flavor from.

In terms of strength versus body with the Eiroa Dark 50 x 5, the body maintained the edge from start to finish.

The Eiroa brand has quietly become one of the better more-premium lines in all of the cigar industry. The Eiroa Dark is another winner under this brand. The cigar delivers a well-balanced flavor profile. In particular, the baker’s spice note is one that is going to stand out. While most of the cigar experience was in the medium to full strength, full-bodied range, I did not find this to be a cigar that was overpowering on the palate. It’s a cigar I’d recommend to an experienced cigar enthusiast, but I certainly wouldn’t discourage a novice from picking up this cigar. As for myself, this is a cigar I’d buy and smoke again. In fact, even at a near $13.00 price point, it is worth going all the way for a box purchase.