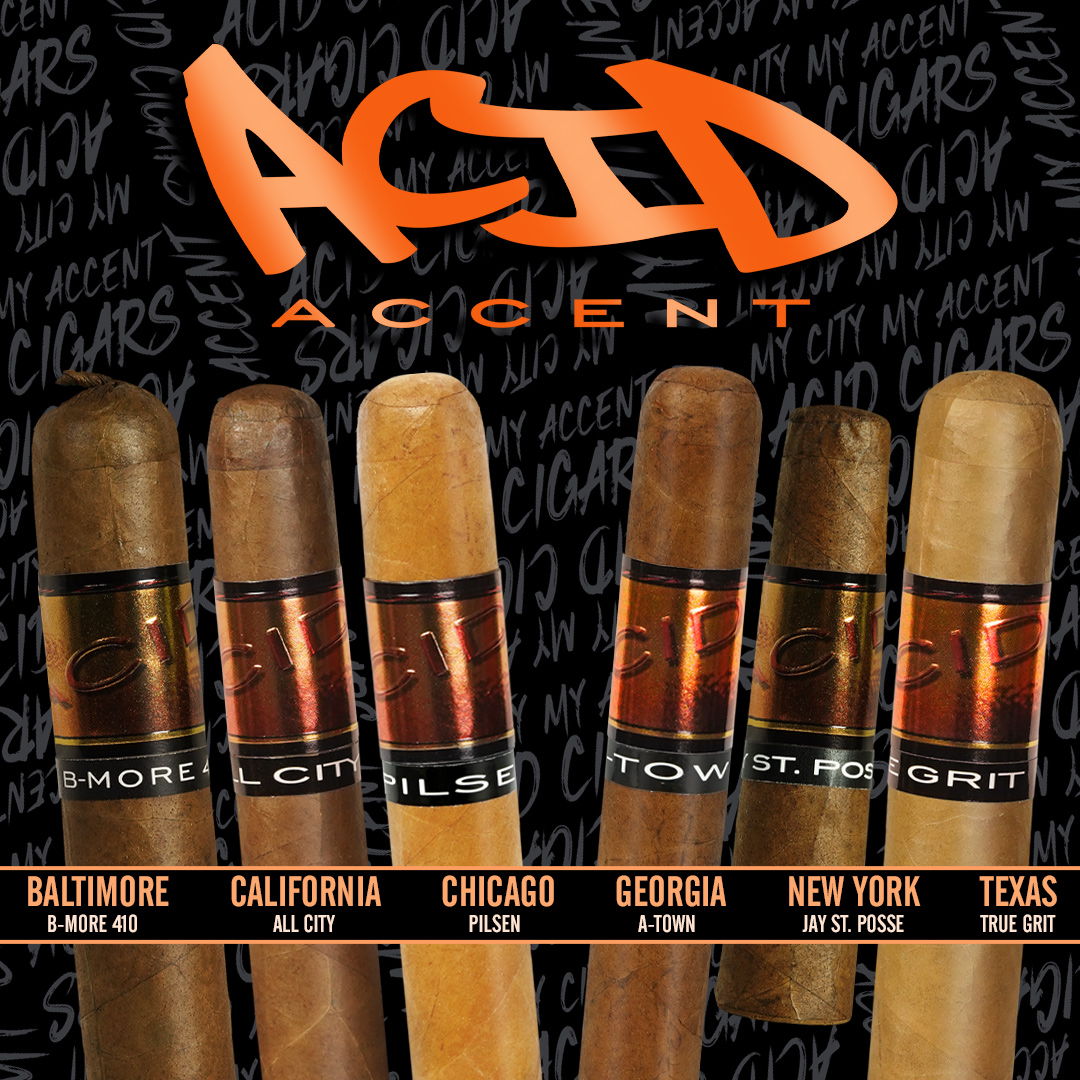 Drew Estate has announced it is adding four regional exclusives to its ACID Accent line. ACID Accent is a program that provides Drew Diplomat retailers with an exclusive cigar available to a specific geography. The news regions being added to the ACID Accent lines include California, Chicago, Georgia, and Texas.

ACID Accent made its debut at the 2019 IPCPR Trade Show with the release of Jay St. Posse for the New York City area and B-More 420 for Maryland.

California receives the All-City, a 5 1/2 x 52 Robusto featuring an Indonesian wrapper and what the company describes as a unique ACID Infusion. The term All City is a term used in graffiti to show that your art can be seen everywhere. In this case All-City will be available to the whole city of California. 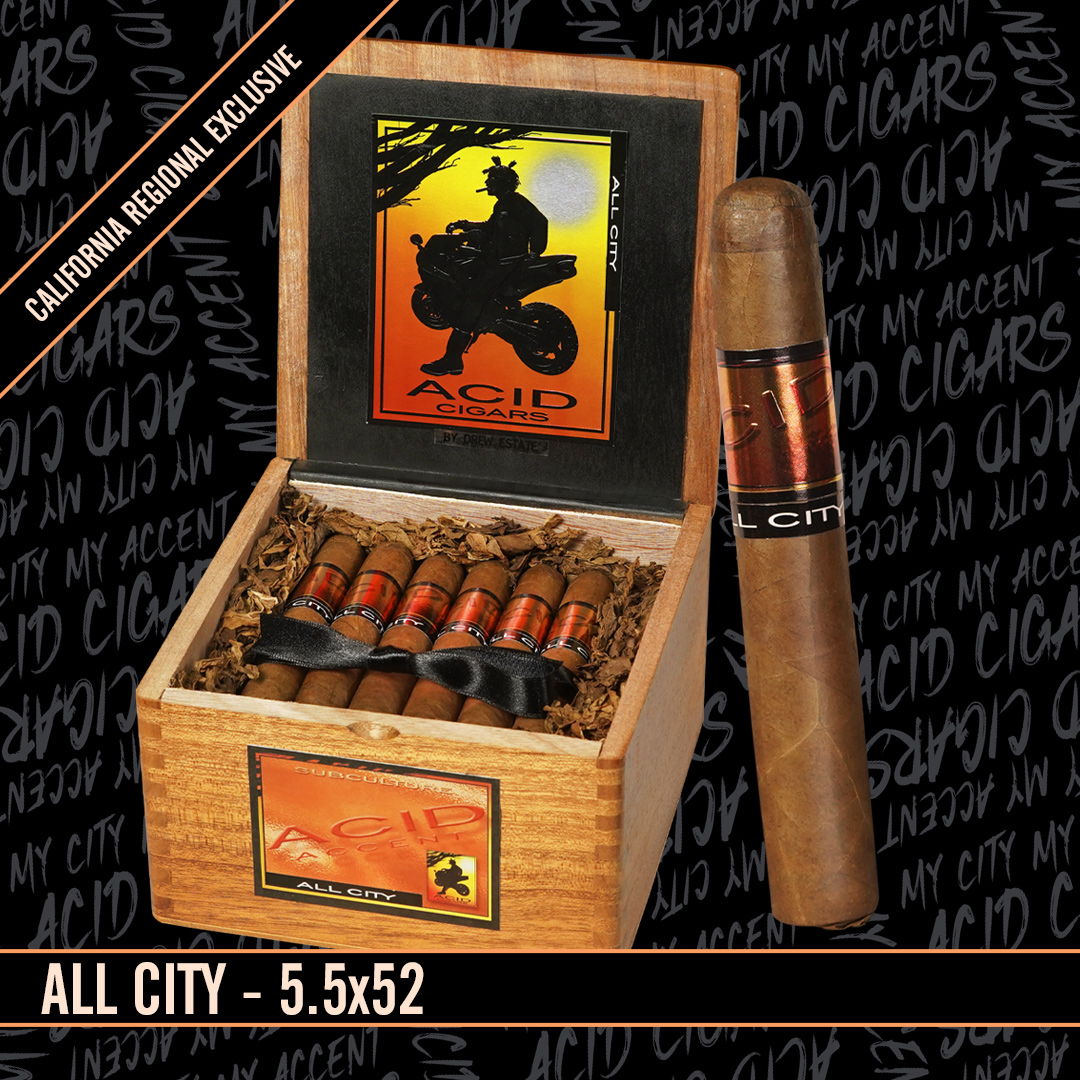 Chicago receives Pilsen. This cigar is a 5 13/16 x 54 Toro featuring an infusion with an Ecuadorian Connecticut Shade wrapper. Pilsen is named after Chicago’s lower west side art district. 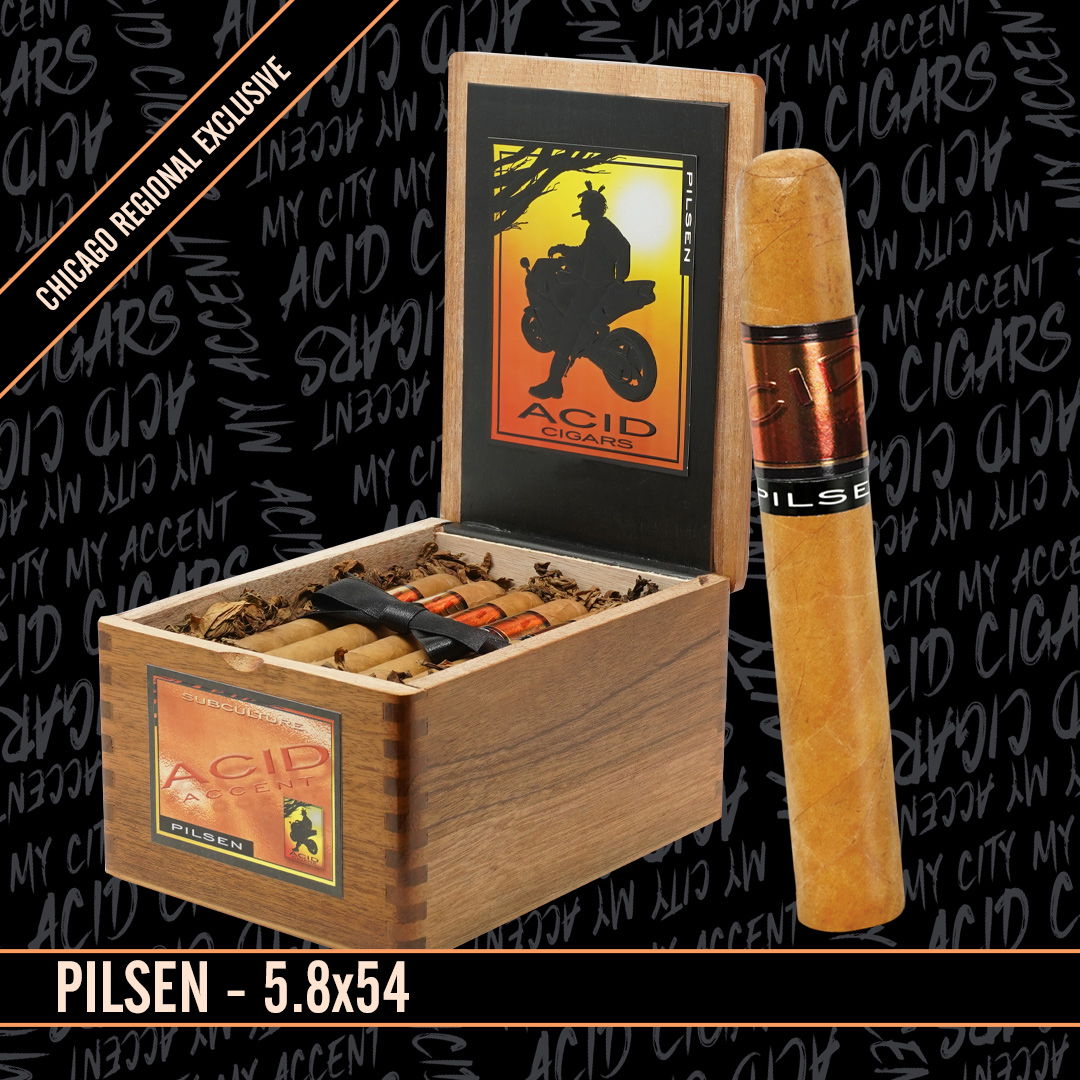 For Georgia, the A-Town is being introduced. This cigar also features an Indonesian wrapper and is available in a 6 x 50 Toro. 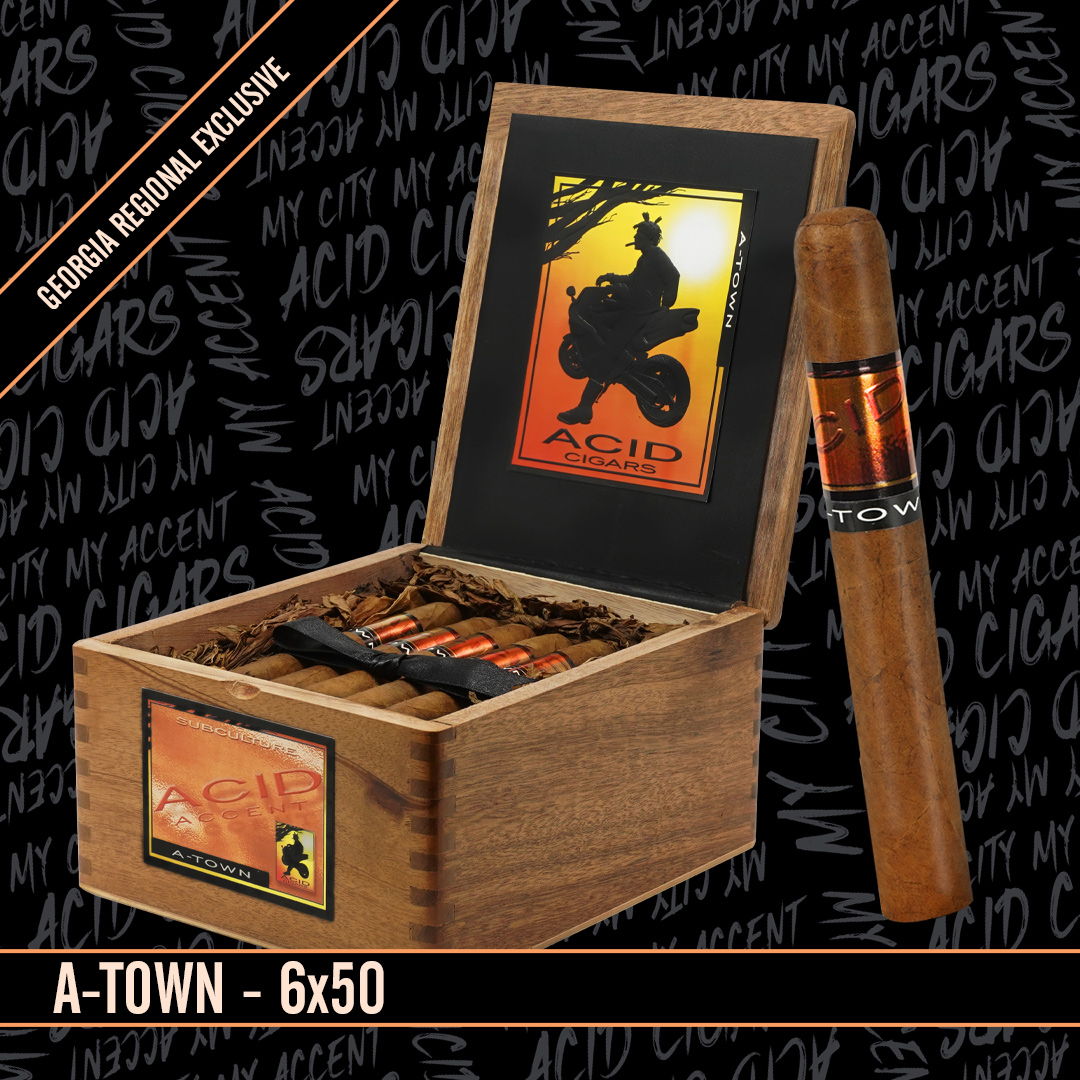 Finally, Texas receives the True Grit, a 6 x 60 Gordito featuring an Ecuadorian Connecticut wrapper and what the company calls a BOLD infusion. 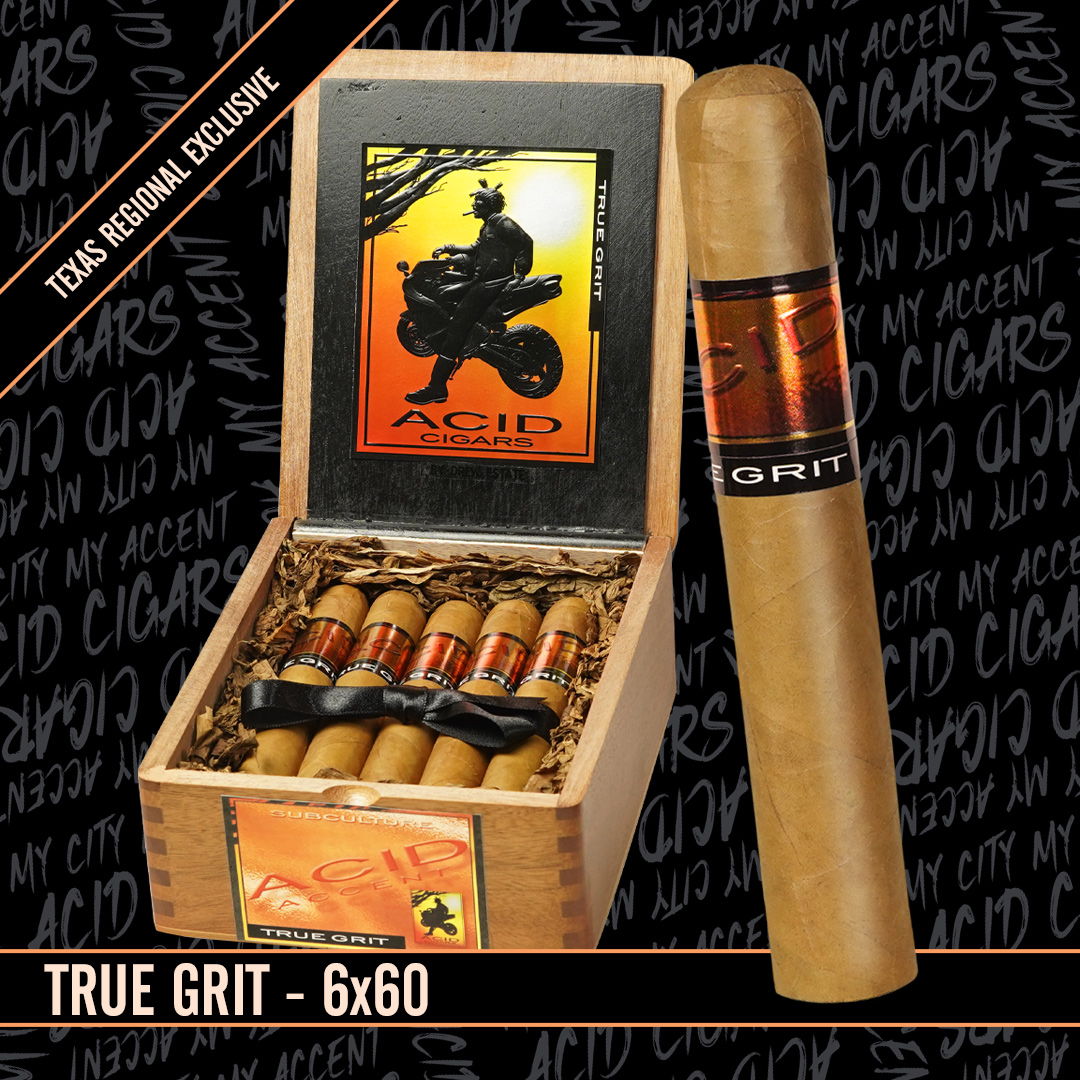 In a press release announcing the new ACID Accents additions, Jonathan Drew Founder and President of Drew Estate commented, “Now with regional exclusives that highlight dynamic local markets, ACID’s global scale is brought front and center to your street corner, your hood, your bario, your geitoniά (that’s Greek for Ike and our other Greek peoples out there) and all sorts of spots, uptown to down, BK to MD and beyond meat.”

A summary of the ACID Accents releases includes: