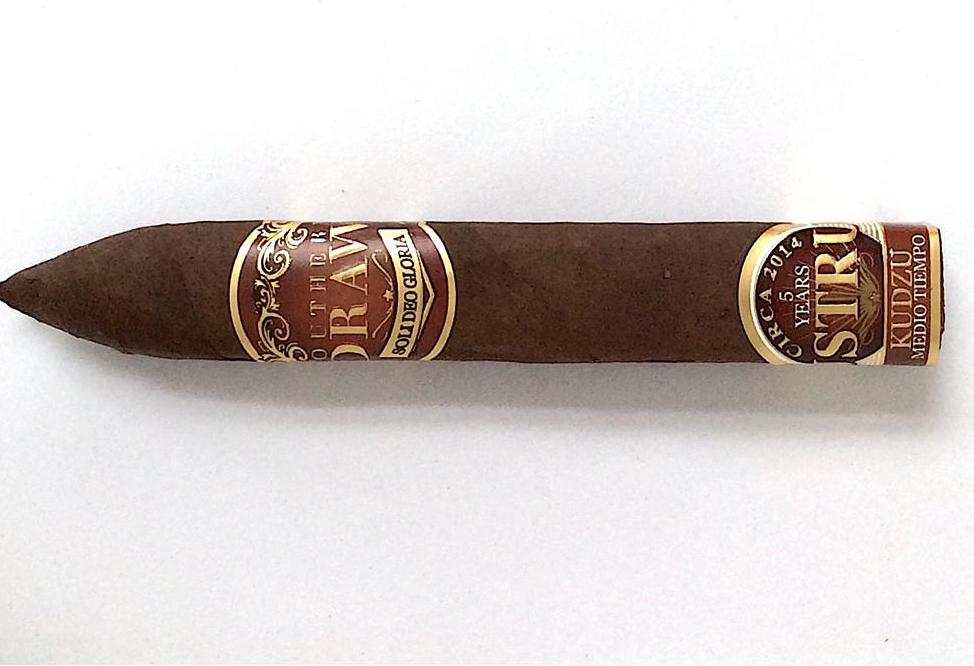 One thing that was quite interesting is the strategy Southern Draw Cigars employed in 2019. While there were several new releases, the company didn’t release any entirely new brands. Instead, there were new blends to enhance the brands in its portfolio. The brands to release special extensions included: Rose of Sharon (Desert Rose), Jacobs Ladder (Brimstone), Cedrus (three new sizes), 300 Hands (Connecticut), Ignite (Connecticut No. 1, Habano No.3, Corojo No. 4,), and of course the Kudzu Lustrum.

Lustrum is the name that comes from the times of Ancient Rome and it means five-year period. Lustrum will also be an ongoing series of small batch releases of future one-time releases that Southern Draw will bring out on each fifth-year anniversary milestone. Kudzu is named for a flower. Southern Draw has named several of its lines for flowers.

Without further ado, let’s break down the Southern Draw Kudzu Lustrum and see what this cigar brings to the table.

The Belicoso Fino was packaged in ten-count paper mazos (bundles) featuring hand-drawn art depicting the family’s prior military service and history. A total of 2,500 mazos of the Belicoso Fino were produced. JR Cigar and Casa de Montecristo received 220 20-count units of the Toro. 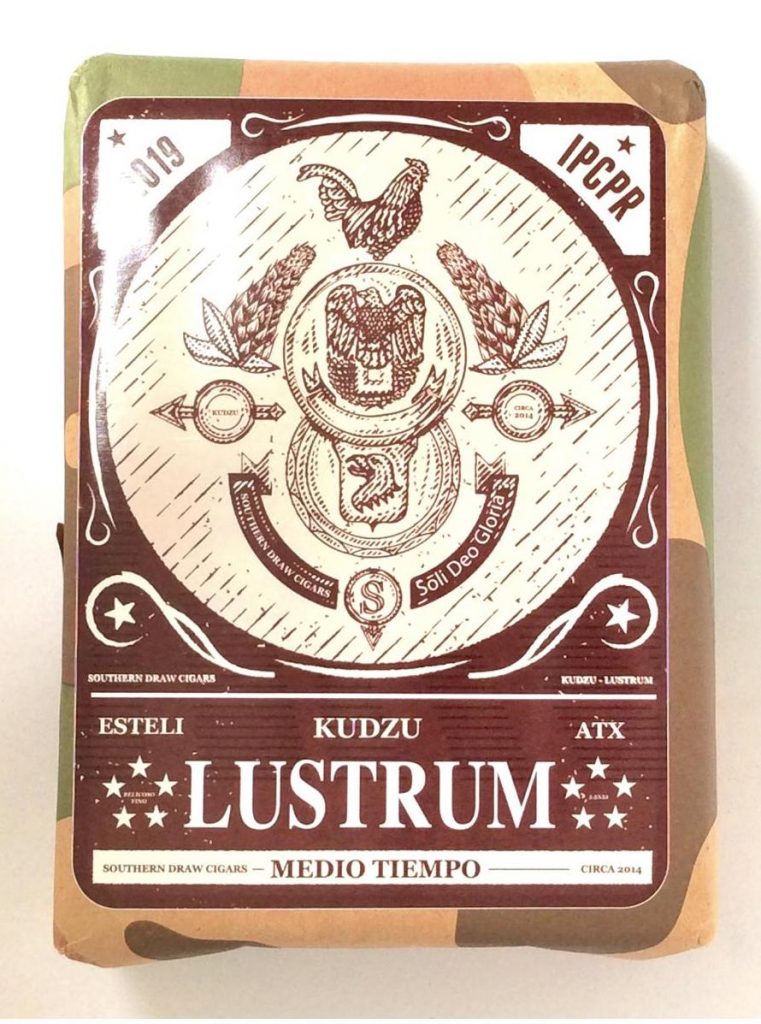 The Medio Tiempo Habano wrapper of the Kudzu Lustrum had rich medium-roast coffee bean color to it. The wrapper itself had a silky complexion to it. Upon closer examination, there was some very subtle mottling on the surface. There were some thin visible wrapper seams. This was a wrapper that didn’t have much in the way of veins. The box-press itself was a sharp square-press. The taper of the belicoso was on the steeper side.

The secondary band of the Kudzu Lustrum is around the footer. It is a cigar that has a brown circular design with gold embellishments surrounded by gold pinstripes on an off-white background. On the design is the text “CIRCA 2014” in gold font and the text “5 YEARS” in white font. Draped across the circle and pinstripe is the text “LUSTRUM” in a large gold font. The lower part of the band has a brown stripe with the text “KUDZU” in gold font and “MEDIO TIEMPO” in a smaller white font. There is thick gold trim on the upper and lower edges of the band. The upper and lower portion has a thinner pinstripe.

A straight cut was used to remove the tip of the Kudzu Lustrum Belicoso Fino. A little less than half of the tip was removed to still allow for the tapering effect of the Belicoso Fino to be enjoyed. From this point, it was time to commence the pre-light draw. The cold draw delivered a mix of coffee, cedar, and natural tobacco. I found the pre-light draw of this cigar to be excellent. At this point, it was time to remove the footer band, light up the Kudzu Lustrum and see what this cigar would deliver in the smoking phase.

The second third saw the coffee notes join the natural tobacco in the forefront. There was an ongoing decrease in the tangy component that was present in the first third. Meanwhile, the notes of the red pepper, cedar, and classic wood were still present in the background. It was during this phase when the creaminess subsided.

By the last third of the cigar, the coffee and natural tobacco remained grounded in the forefront. There still were touches of tanginess. The red pepper and cedar notes increased in intensity, but didn’t quite make their way into the forefront. There also were touches of wood in the background. This is the way the Southern Draw Kudzu Lustrum Belicoso Fino came to a close. The resulting nub was firm to the touch and cool in temperature.

One thing that I was concerned about is how this cigar would burn with such as high priming wrapper. Those concerns would prove to be unwarranted.

Overall the burn of the Southern Draw Kudzu Lustrum Belocoso Fino maintained a relatively straight path. The burn line had some slight waviness, but at no point was this a burn that was in danger of coming off track. The resulting ash was silver-gray with some darker streaks in it. This was an ash skewed toward the firmer side. The burn temperature was ideal.  The burn rate was slightly faster than I prefer with the Kudzu Lustrum Belicoso Fino averaging 46.5 minutes per smoke. 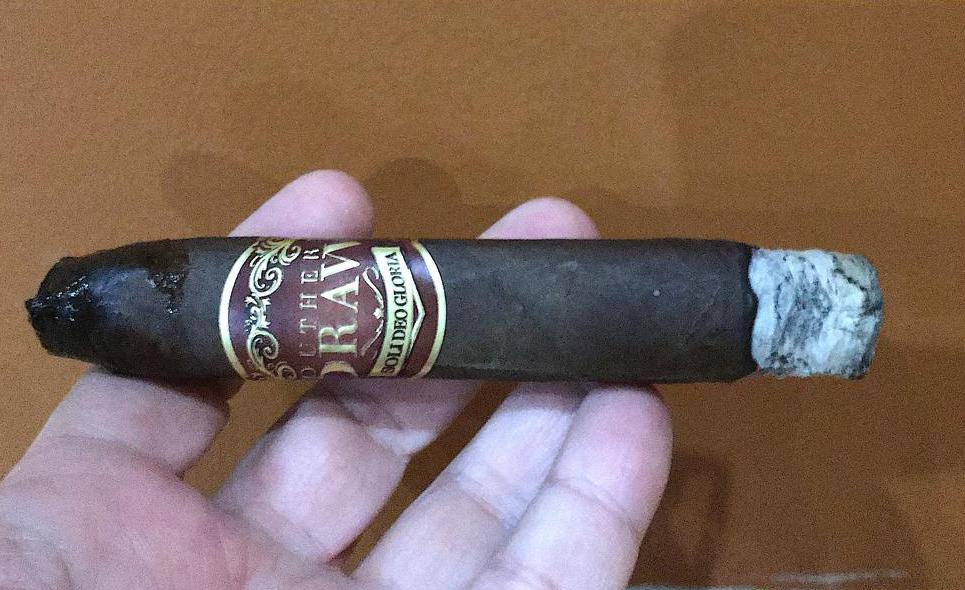 While this wasn’t a bad daw, it wasn’t what I expected from a Southern Draw Cigar. I found the Kudzu Lustrum Belicoso Fino to have more of an open draw that I prefer. This also lead to an increase in smoke production, and a faster smoking rate. Personally I usually prefer a little more resistance on my draw.

Overall the Lustrum was an enjoyable cigar. The softer, creamier profile worked well with the flavors delivered – and this cigar still had a nice amount of bold-ness. This is a cigar I would still recommend to a more seasoned cigar enthusiast, but certainly wouldn’t discourage a novice from trying. As for myself, it’s a cigar I’d smoke again – and buy multiples to keep in my humidor.