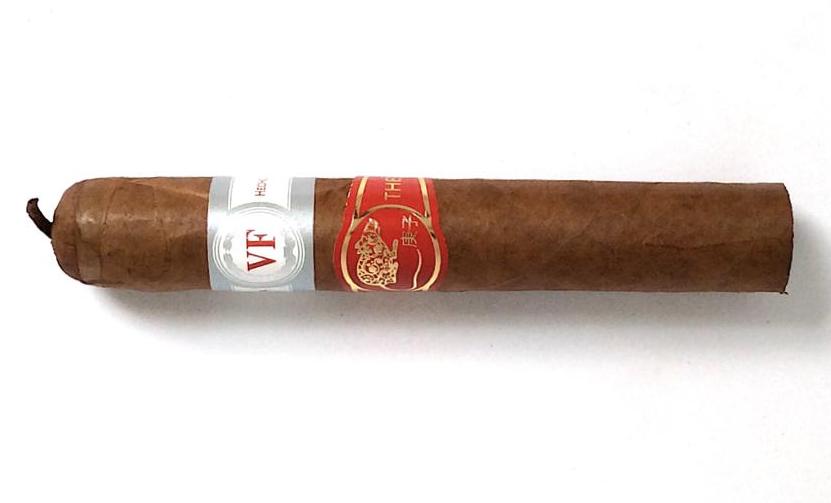 VegaFina Year of the Rat

VegaFina is a brand that is under Imperial Tobacco’s Tabacalera S.L.U. group. While the VegaFina Year of the Rat is a release that is sold in the European market, it is not totally an unknown brand to U.S. consumers. Over the years there have been several VegaFina releases in the U.S. sold by Altadis U.S.A. While VegaFina might not be as well known as Montecristo or Romeo y Julieta in the U.S., it is a brand that has maintained popularity in the European market – particularly Spain.

Without further ado, let’s break down the VegaFina Year of the Rat and see what this cigar brings to the table. 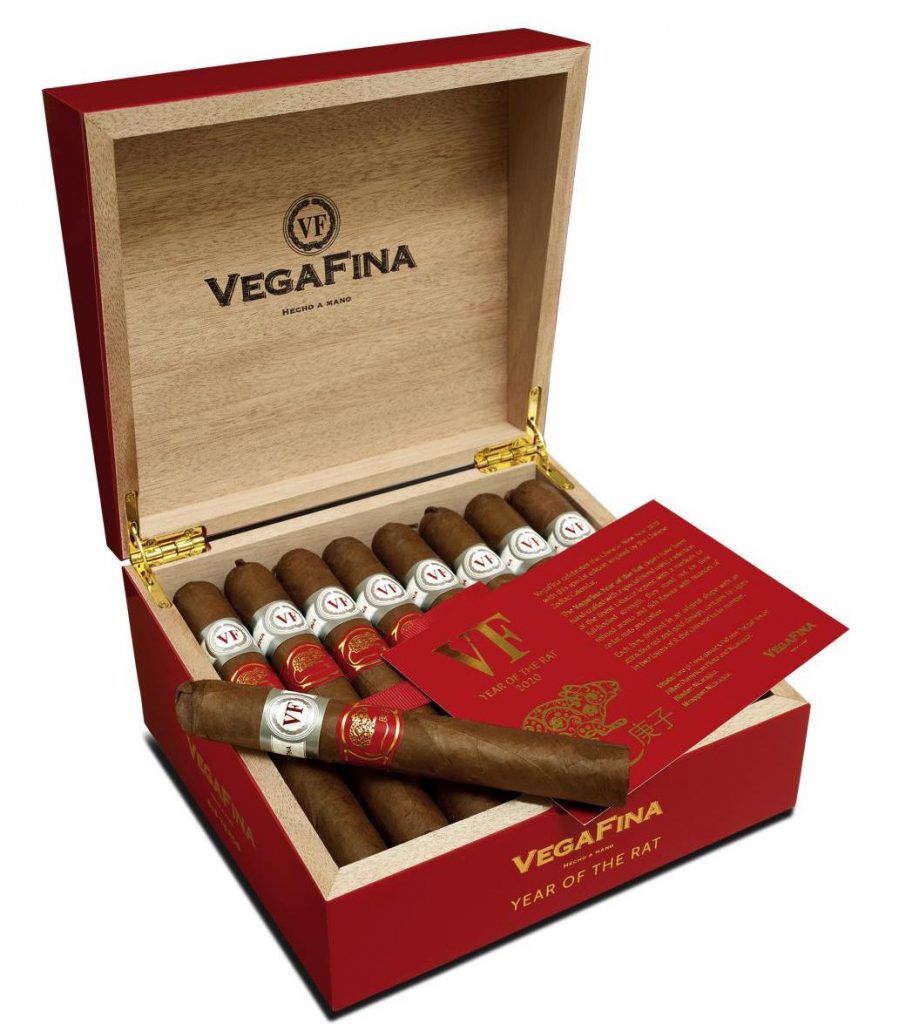 Packaging of the VegaFina Year of the Rat (Photo Credit: Tabacalera S.L.U.)

The Habana 2000 wrapper of the VegaFina Year of the Rat has a strong Colorado-red tint. There is a coat of oil on the bumpy surface of the wrapper. There were some thin veins and thin wrapper seams. The cap is finished with a pig-tail representing the tail of a rat.

There are two bands on the VegaFina Year of the Rat The primary band has a white background with silver trim. On the center of the band is a red “VF” surrounded by a silver wreath which in turn is surrounded by a series of silver concentric circles. The left side of the band has the text “VEGAFINA” in red font while the right side has the text “HECHO A MANO” in red font.

There is a secondary band that is red with gold font. On the center of the band is an image of a rat. To the left of the image is the text “YEAR OF” and to the right is the text “THE RAT.”

As opposed to pulling off the pig-tail of the VegaFina Year of the Rat, a straight cut was used to remove the cap in its entirety with the pig-tail. From that point, it was on to the pre-light draw. The cold draw was quite simple – notes of cedar and earth. While it wasn’t the most exciting pre-light draw, the pre-light draw is not scored on Cigar Coop so there was no loss of points here. At this point, it was time to light up the VegaFina Year of the Rat and see what the smoking experience would have in store.

The VegaFina Year of the Rat started out with notes of natural tobacco, cedar, and leather. The natural tobacco notes moved into the forefront early on and were joined by some fruit sweetness. The cedar and leather settled in the background. At this point, the retro-hale was subtle with a layer of cedar and black pepper.

Moving into the second third, the fruit sweetness began to slowly diminish and by the midway point, it was now a background note. The natural tobacco remained grounded in the forefront. Meanwhile, some black pepper emerged on the tongue and slowly started to increase. The cedar remained in the background and also by the midway point, the leather notes had dissipated.

By the last third, the natural tobacco remained the primary note. The one big change was that the black pepper noes were more prominent in the background, but they still were not near approaching becoming a primary note. There were some notes of cedar and fruit that remained. This is the way the VegaFina Year of the Rat finished off. The resulting nub was cool in temperature and slightly soft to the touch.

While there was some occasional jaggedness on the burn line, the VegaFina Year of the Rat had no problem maintaining a straight burn path. The resulting ash was on the firm side with a silvery-gray color to it. Meanwhile, the cigar maintained an ideal burn rate and ideal burn temperature. 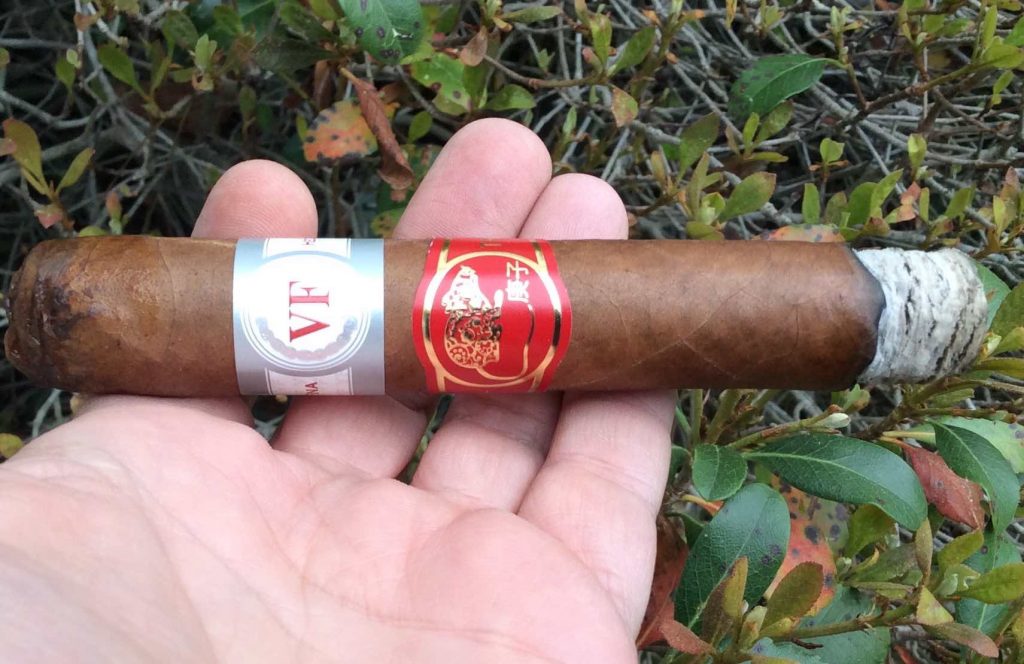 Burn of the VegaFina Year of the Rat

The draw to the VegaFina Year of the Rat performed quite well. It had the touch of resistance that I normally look for on a draw.  At the same time, there was no problems deriving the flavors from this cigar.

The VegaFina brand is known for its lighter and milder cigars. In the case of the VegaFina Year of the Rat, that is exactly what was delivered on this smoking experience. I had heard some reports of this being more of a medium cigar, but I don’t agree with those assessments.

It’s a cigar that delivered mild strength for the first two thirds before boosting into mild to medium territory by the last third. As for the flavors, they were mild to medium-bodied from start to finish. While the intensity level of the body increased, the cigar fell a little short of reaching the medium range of the spectrum.

In terms of the strength versus body of the VegaFina Year of the Rat, I gave a slight edge to the body.

One thing that I have said about the VegaFina brand is that it delivers excellent cigars at a very competitive price point. The VegaFina Year of the Rat is a cigar that reaches the threshold of excellence on Cigar Coop (scoring a 90). I didn’t find this to necessarily be the most complex flavor profile, but the flavors delivered were spot-on. The dialed-back profile worked much better with the flavors delivered as opposed to if this cigar was on the fuller side. Priced under nine U.S. Dollars it’s a great value for any cigar enthusiast – and a cigar I’d recommend to anyone. As for myself, this is a cigar I would reach for again – and its one that garners box worthy consideration.