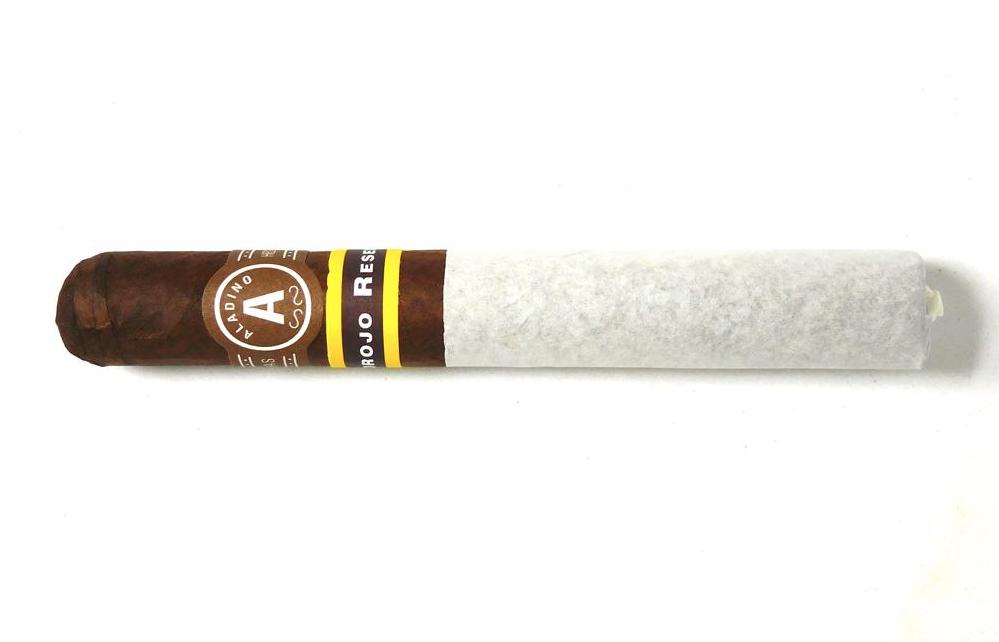 JRE Tobacco Company is owned and operated by the father and son team of Julio R. Eiroa and Justo M. Eiroa. The Aladino name can be traced back to the 1970s. There was a historic movie theater in Danlí, Honduras known as El Cine Aladino. This theater was operated by Christian and Justo Eiroa’s grandfather. Today, Christian owns the Aladino factory, which is in the theater’s former location. Aladino is also the name that Julio Eiroa chose to name one of his brands. When Aladino was released, this was a brand positioned as delivering a classic, “old-fashioned” cigar experience reminiscent of those during the “Golden Age” between 1947 and 1961. Aladino has since grown to be the workhorse brand of JRE Tobacco Company portfolio. In addition to the original Aladino and Aladino Corojo Reserva lines, Aladino now has an Aladino Maduro and Aladino Connecticut offering along with new 2020 releases with the Aladino Cameroon and Aladino Habano lines.

Without further ado, let’s take a closer look at the Aladino Corojo Reserva No. 4 and see what this cigar brings to the table.

As mentioned, the Aladino Corojo Reserva Toro consists of 100% Authentic Corojo tobaccos grown on the JRE Tobacco farm in the Jamastran Valley of Honduras. Authentic Corojo originates from the original Cuban seeds. It is a leaf that is susceptible to disease and as a result, it started to vanish from the market. Today many growers have opted to use a hybridized seed that is more resistant to disease. Using a series of innovations to mitigate risk of disease, the Eiroas have been able to resurrect the Authentic Corojo leaf. Production for the Aladino Corojo Reserva occurs at the company’s Las Lomas factory located adjacent to the JRE Tobacco farm.

As mentioned the Aladino Corojo Reserva has now been released in three sizes. Each of the three sizes is presented in 20-count boxes.

The Authentic Corojo wrapper of the Aladino Corojo Reserva No. 4 had a medium/medium to dark brown color to it with a touch of Colorado red. Upon closer examination, some darker mottling could be seen on the surface. This was a wrapper that had a very light coat of oil on the surface. There are some visible veins making for a slightly bumpy surface. There were also some minimally visible wrapper seams. 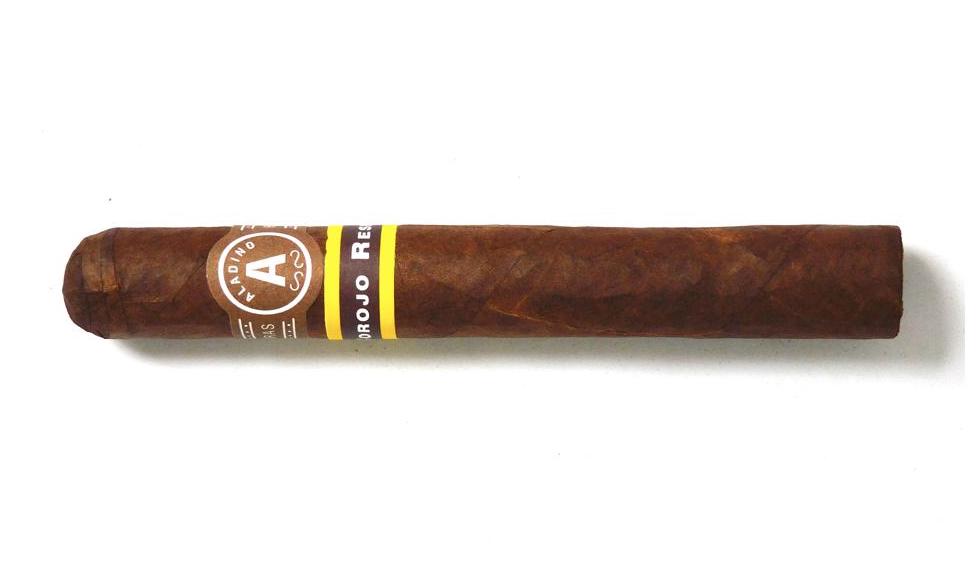 Like the other two sizes of the Aladino Corojo Reserva, the No. 4 has a tissue sleeve covering 3/5 of the cigar from the footer up.

The Aladino Corojo Reserva features two bands. The primary band is brown with white font.  The front and center of the band features a brown circular field with white trim. On that field is a large white “A” with the text “ALADINO” arranged in a curved fashion above it. To the left of the circle is the text “HONDURAS” while to right is the text “HECHO A MANO” – both in white font.

After removing the tissue sleeve on the Aladino Corojo Reserva No. 4, a straight cut was used to remove the cap of the cigar. Once the cap was removed, it was on to the pre-light draw stage. The cold draw delivered a mix of earth, natural tobacco, and chocolate. This was a satisfactory pre-light draw. At this point, it was time to light up the Aladino Corojo Reserva No. 4 and see what the smoking experience would have in store.

The second third of the Aladino Corojo Reserva No. 4 saw the coffee bean notes join the lemon zest in the forefront. The red pepper remained a close secondary note. The chocolate notes and natural tobacco that were more dominant early on settled in the background and were joined by some woody notes.

The final third saw the red pepper join the lemon zest and coffee bean notes. The coffee bean settled in the background with the natural tobacco and coffee notes. This is the way the Aladino Corojo Reserva No. 4 came to a close. The resulting nub was firm to the touch and cool in temperature.

The burn of the Aladino Corojo Reserva No. 4 did require some touch-ups to maintain a straight burn line and straight burn path. The touch-ups required were slightly above the norm of what I would expect. As for the resulting ash, it was skewed toward the firmer side. This was an ash that was silver gray with some darker streaks mixed in. The burn rate and burn temperature were both ideal. 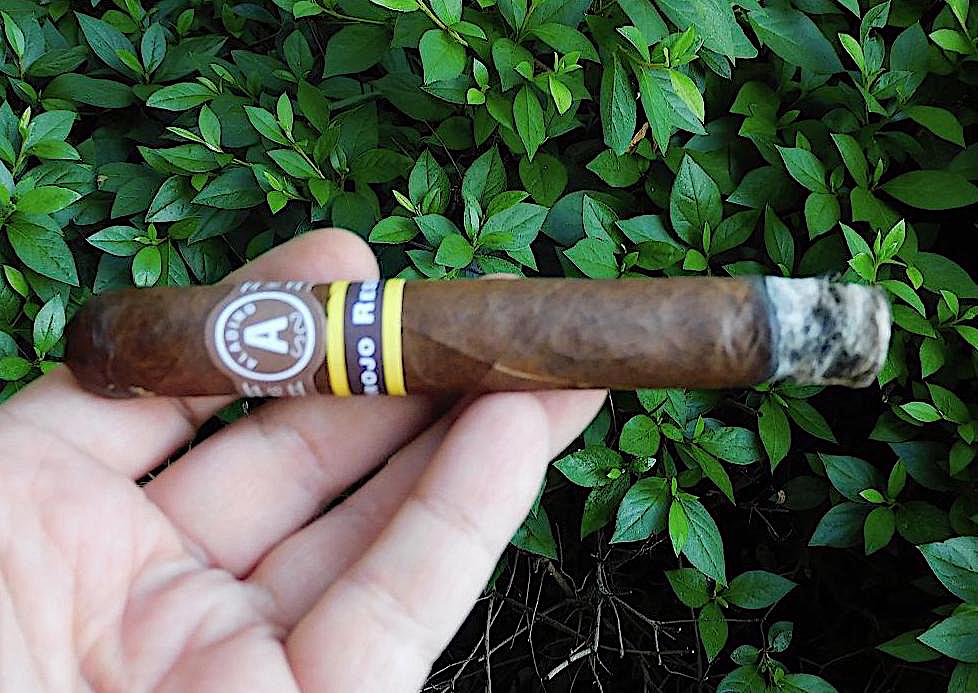 Burn of the Aladino Corojo Reserva No. 4

The Aladino Corojo Reserva No. 4 had an ideal draw. This was a draw that had that ever slight amount of resistance which made for an ideal smoking experience. The smoke production was not overpowering, but more than satisfactory.

Strength-wise, the No. 4 size keeps in the wheelhouse of the rest of the Aladino Corojo Reserva line. This is a cigar that starts out classic “3/4” (medium to full) strength and remains in that range for the duration of the smoke. There was a nominal increase in strength, but the cigar fell short of moving into full strength territory.

Body-wise, the flavors started out a little mellower than I expected from the Corojo Reserva line – more in the medium-bodied range. The flavors did increase in intensity and by the second half, the No. 4 moved into medium to full-bodied territory. When it came to strength versus body, the strength had the edge throughout the smoking experience.

The Aladino Corojo Reserva No. 4 is an enjoyable cigar. It’s going to excel in the category that is most important – flavor. It exceeds the threshold for “standard of excellence” on Cigar Coop with pulling a merit score of 91. The problem is – it is in a line that offers two of the best cigars we have seen in recent memory – the Toro and of course, the 2018 Cigar of the Year Robusto size. That being said, something has to rank #3 among those three cigars and the No. 4 is that cigar. However don’t consider this a consolation prize. The No. 4 is still an excellent and satisfying smoke – and it’s a nice option for someone looking for a bold corona-sized cigar. This is a cigar I would recommend to a more seasoned cigar enthusiast. As for myself, this is a cigar I would smoke again – and keep multiples in my humidor.