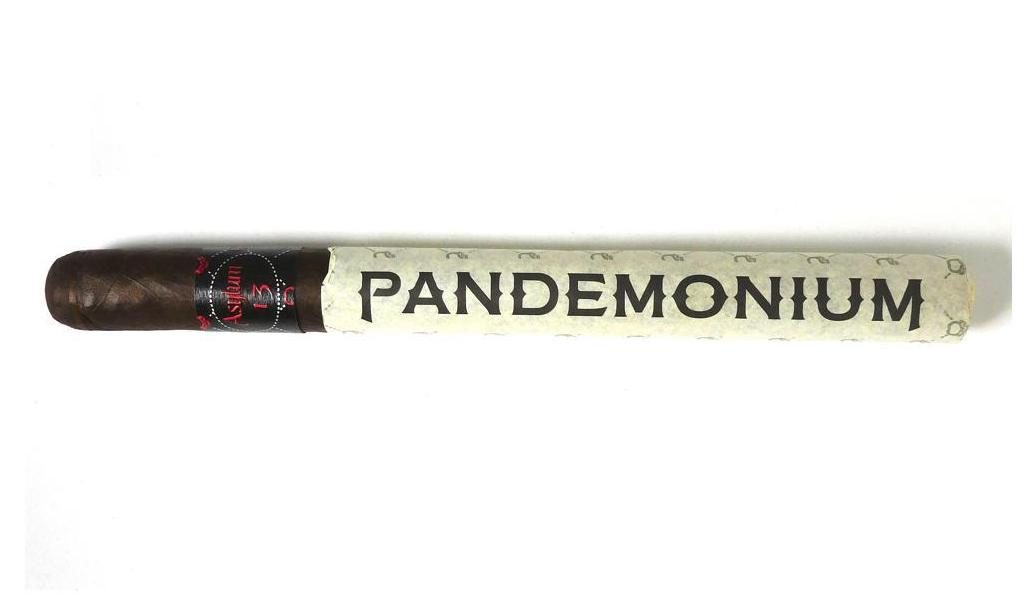 Recently, Cigar Coop published its The Decade List – The Impact Lines list. This was a list of cigar lines of some of the most impactful lines in the cigar industry. The line that came in at number two was the Asylum 13 line. The reason why this line placed so high was because of the impact it had on the large ring gauge market. While Asylum Cigars certainly didn’t invent the big ring gauge, the brand had an enormous amount of success due to its big ring gauge cigars. In some ways, its a little unfair because the company has had other projects which have also been successful. Over the years, Asylum has found many ways to innovate, and it has also played a role in the company’s success. One such example was the release of the Asylum Pandemonium in 2019. While there were some vitolas in the Asylum Pandemonium that had large ring gauges, that wasn’t the the most noticeable thing. Pandemonium is a line where all of the vitolas launched were long cigars – each measuring 8 1/2 niche in length. Today we turn our attention to one of the smaller ring gauge releases in the Asylum Pandemonium line – the 52 x 8 1/2.

Asylum Cigars is one of the company’s under the C.L.E. Cigar Company umbrella. It is co-owned by Tom Lazuka and Christian Eiroa. There is some heritage to the Asylum Pandemonium. If you go back to the former company that Eiroa owned, Camacho Cigars, you will see that 8 inch plus cigars were also a part of the portfolio. It makes some sense that at some point, a vitola like this would find its way under a release in the C.L.E portfolio. It also makes sense that the home for such a long cigar would be under the Asylum name.

Without further ado, let’s break down the Asylum Pandemonium 52 x 8 1/2 and see what this cigar brings to the table.

Asylum Cigars divides its production between Nicaragua and Honduras. The Asylum Pandemonium is a line produced in Nicaragua. The cigar itself features 100% Nicaraguan tobacco.

The Asylum Pandemonium is offered in three sizes. As mentioned, each of the three sizes is 8 1/2 inches in length. In addition to the 52 ring gauge size we are discussing today, there are also 60 and 70 ring gauge offerings.

The cigars ship in 60-count trays with compartments to hold each of the three sizes. 20-count bundles can be ordered to refill the trays. 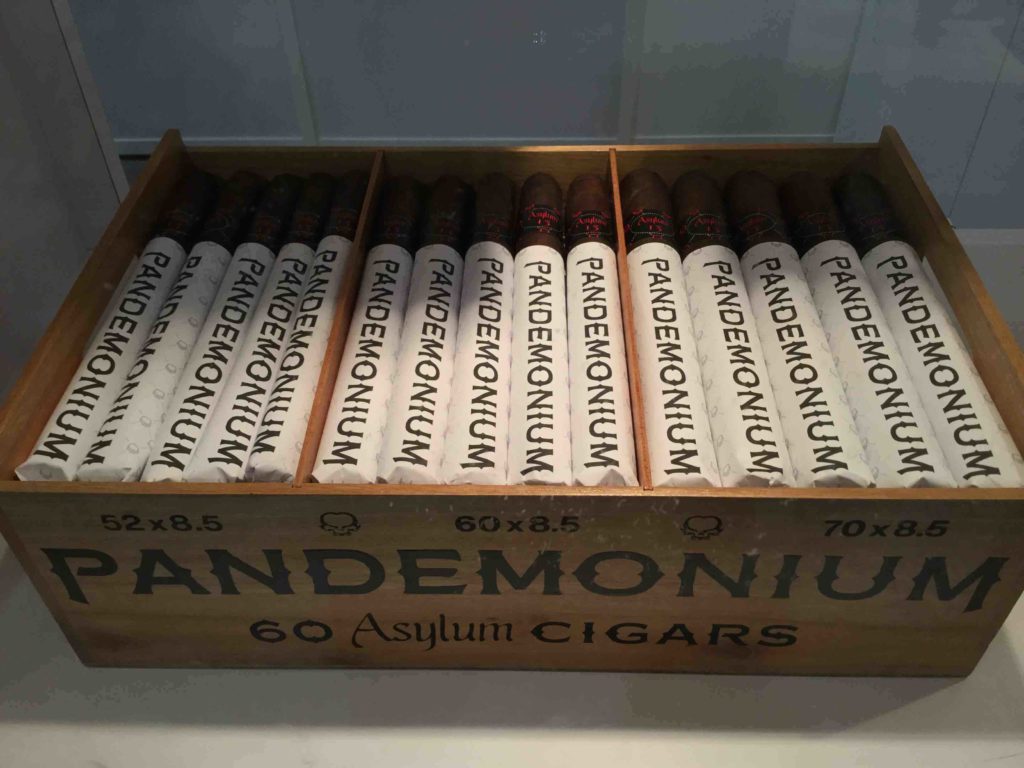 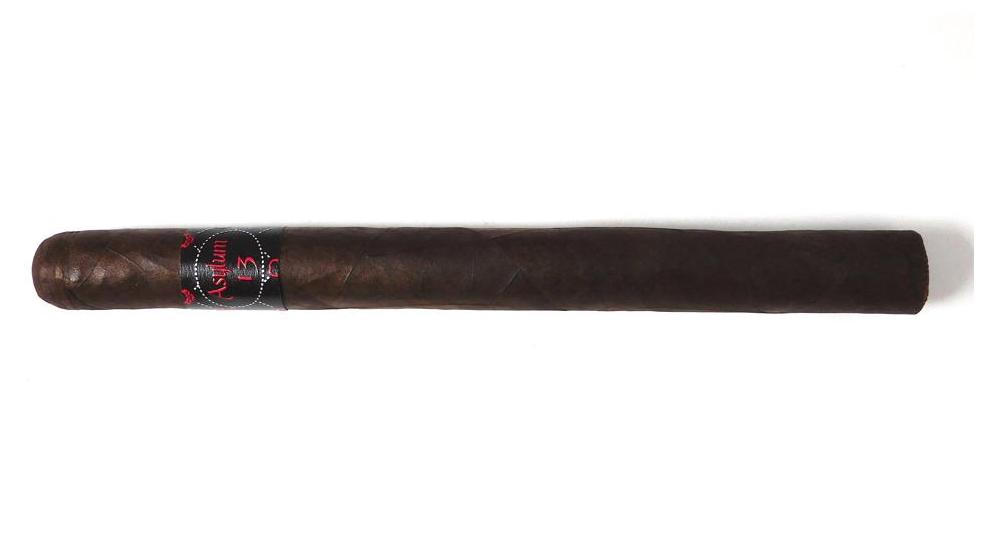 Each cigar has a white tissue sleeve. On the sleeve is the text “PANDEMONIUM” in gray font along with the chain-link and skull pattern in a slightly lighter gray. One reason for this is Asylum Cigars co-owner Christian Eiroa has been on the record for his dislike of cellophane.

After removing the tissue sleeve of the Asylum Pandemonium 52 x 8 1/2, a straight cut was used to remove the cap. Once the cap was removed, it was on to the pre-light draw. The cold draw delivered notes of cocoa, dusty earth, and a slight citrus component. Overall, these flavors worked nicely on the pre-light draw and yielded an excellent experience. From that point, it was time to light up the Asylum Pandemonium 52 x 8 1/2 and see what the smoking phase would have in store.

Early in the second third, the cocoa notes quickly morphed into a coffee bean flavor. At times there was a slight bitter component, but this balanced out nicely with the sweetness from the citrus and the spice from the pepper. As the cigar moved into the second third, cedar notes soon emerged. Both the cedar and pepper slowly increased in intensity.

By the start of the final third of the Asylum Pandemonium 52 x 8 1/2, the pepper and cedar joined the coffee bean in the forefront and eventually pushed the coffee bean into the background with the citrus and earth. This is the way the Asylum Pandemonium 52 x 8 1/2 came to a close. The resulting nub was slightly soft to the touch and cool in temperature.

The burn to the Asylum Pandemonium 52 x 8 1/2 performed extremely well and had no problem maintaining a straight burn path or a straight burn line. There were some touch-ups along the way, but they were not many. The resulting ash had a salt and pepper color. This was a firm ash that was produced from the cigar. The burn rate and burn temperature were I deal. The samples smoked took an average of 2 hours 13 minutes to smoke.

The draw to the Asylum Pandemonium 52 x 8 1/2 performed very well from start to finish. There was a touch of resistance throughout the cigar experience. The fact that it held up throughout the smoking experience – including the early parts where there was a long path to draw from was a big positive.

The Asylum Pandemonium was positioned as the strongest and boldest release in the Asylum portfolio, but the samples I smoked didn’t demonstrate this. The 52 x 8 1/2 was a cigar that started out medium in strength and body. While there was an increase in the intensity levels of both attributes, the cigar remained in the medium range of the spectrum until the end. One note that is important to make is that the cigars smoked for this assessment had about six months of age on them, so it’s quite possible these cigars did mellow with age.

In terms of strength versus body, both attributes balanced each other nicely throughout the smoking experience with neither attribute overshadowing the other.

Whether the Asylum Pandemonium 52 x 8 1/2 mellowed or not is a question I did not have an answer to with this cigar. What I can say is I liked how the flavors meshed with the medium profile that was delivered for this cigar. It wasn’t overly complex, but it was still a cigar that held my interest from start to finish. Many times a longer cigar could run out of gas. While the cigar did finish with a little more spice than I prefer, it certainly did not run out of gas flavorwise.  As for myself, while an 8 1/2 inch cigar is going to take a commitment to smoke, it’s a commitment I’d be willing to make again with this cigar. It’s certainly one I would recommend to any cigar enthusiast to buy one and smoke. It’s also one where some age won’t detract from the cigar experience.