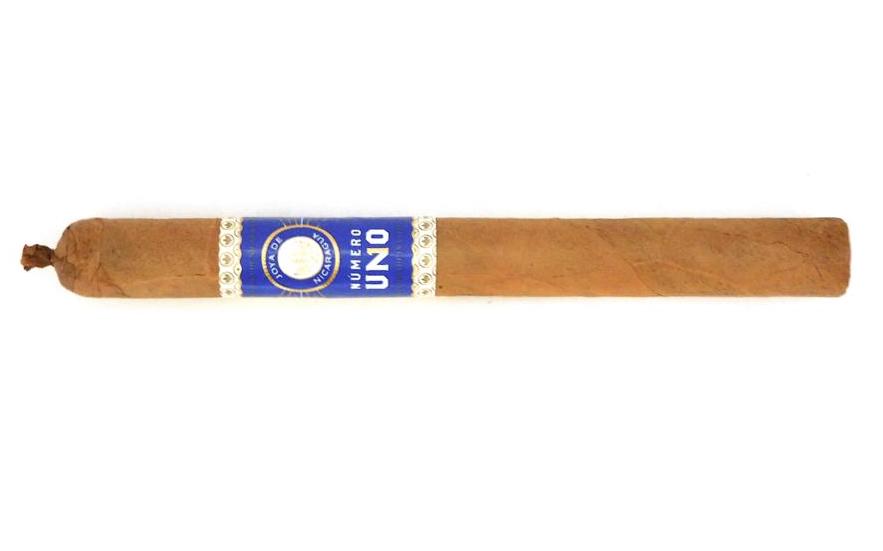 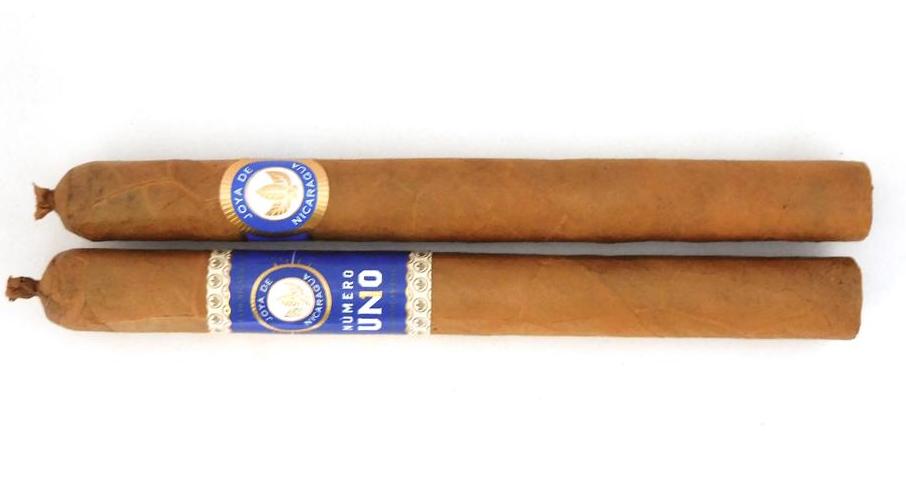 When Numero Uno was launched, it was in a single size – the L’Ambassadeur Lonsdale offering. Recently, Joya de Nicaragua announced a second size, a Churchill offering called Le Premier. There also is a third size that didn’t have much media fanfare in the form of a Corona size called L’Attache. This size went as a shop exclusive to UpDown Cigars in Chicago.

The Numero Uno L’Ambassadeur is presented in 25-count boxes. 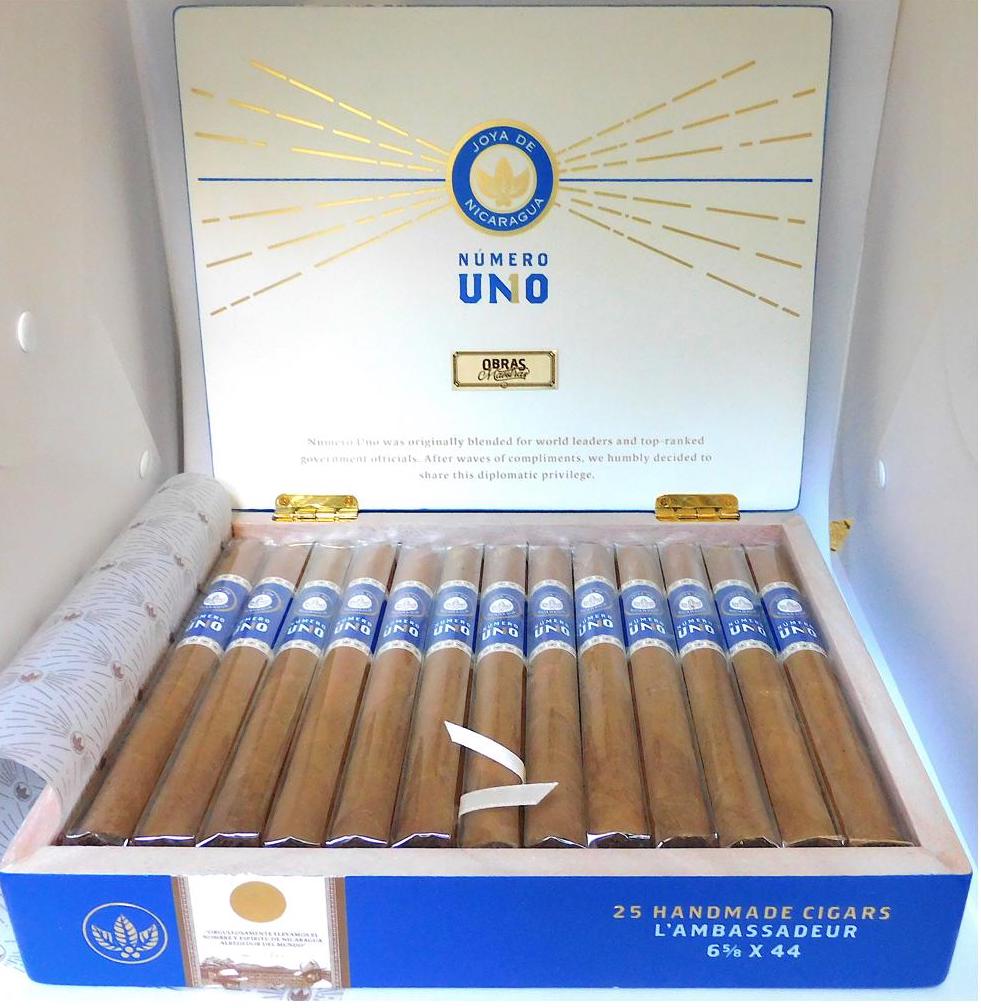 The Ecuadorian Connecticut wrapper of the Numero Uno L’Ambassadeur had a very elegant look highlighted by butterscotch color. This was a wrapper that had a light sheen of oil. This was a smooth wrapper that did have some thin visible veins and thin wrapper seams. The cap was finished with a fan-tail. 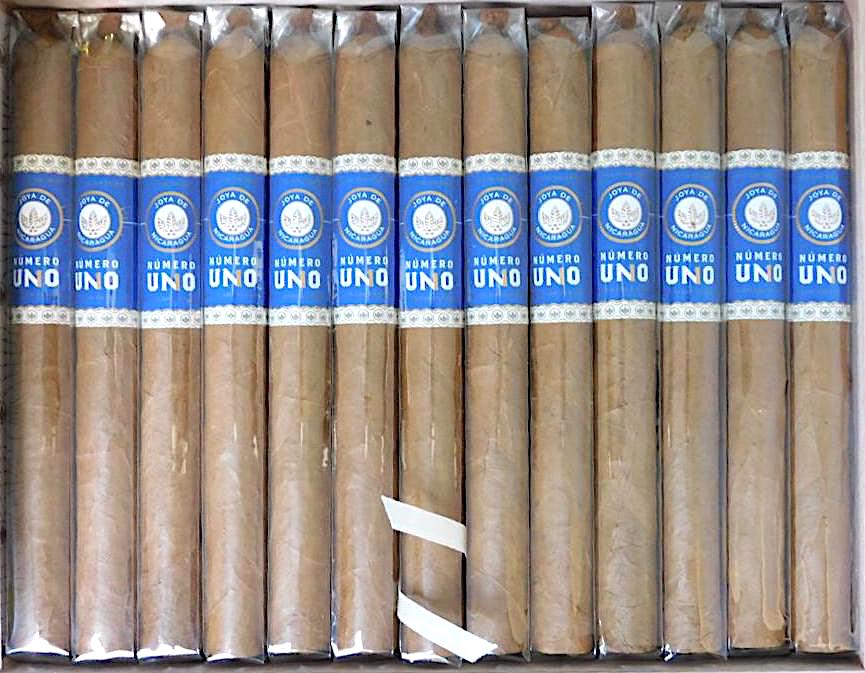 The band to the Numero Uno is mostly blue in color with antique white trim on the top and bottom that has a stream of gold Joya de Nicaragua leaf logos. On the center of the band is a gold leaf sitting on a white circular field. The circular field has a blue ring around it with gold trim. On the ring is the text “JOYA DE NICARAGUA” in white font arranged in a curved fashion. Surrounding the ring is a gold and blue sunburst effect. Above the logo is the text “FABRICA JOYA DE NICARAGUA S.A.” in thin gold font. Below the logo is the text “NUMERO” in white font and “UNO” in a larger white one. On the right portion of the “N” of “UNO” is a gold “1” sitting on it. The lower portion of the band has the text “HANDMADE IN ESTELI” in thin gold font. The far right of the band has a gold foil effect. On the foil is a nameplate design with white trim. On the nameplate design is the text “OBRAS” in blue print font and “Maestros” in blue cursive font.

As opposed to pulling the fan-tail off of the Numero Uno L’Ambassadeur, a straight cut was used to remove both the cap and tail simultaneously. Once the cap was detached from the cigar, it was on to the pre-light draw phase. The cold draw delivered a mix of floral, cream, and cedar. At times the floral and cedar were a little overwhelming, so this wasn’t the most exciting pre-light draw. Since the pre-light draw is not factored into our numeric score or value rating, there was no loss of points here. At this point, it was time to light up the Joya de Nicaragua Numero Uno L’Ambassadeur and see what this cigar would bring to the table.

The Joya de Nicaragua Numero Uno L’Ambassaduer started out with notes of cream, cedar, lemon-citrus, and nut. There was no dominant note early on, but eventually the citrus notes moved into the forefront. Meanwhile, the other notes settled into the background. Concurrently the retro-hale produced an additional layer of cedar with black pepper mixed in.

Throughout the second third, the earth and cedar notes alternated in intensity. The black pepper increased at a slow rate during this phase. By the final third the cedar notes took control. There still were notes of lemon-citrous, black pepper, and nut. The creamy notes had completely dissipated by this point. As the Numero Uno L’Ambassaduer came to a close, the resulting nub was slightly soft to the touch and cool in temperature.

When it came to the burn, the Numero Uno L’Ambassaduer scored very well. This was a cigar that had no problem maintaining a straight burn path and straight burn line. The resulting ash had a light gray color. This was a firm ash that came off the cigar in clean chunks. The burn rate and burn temperature we’re ideal. 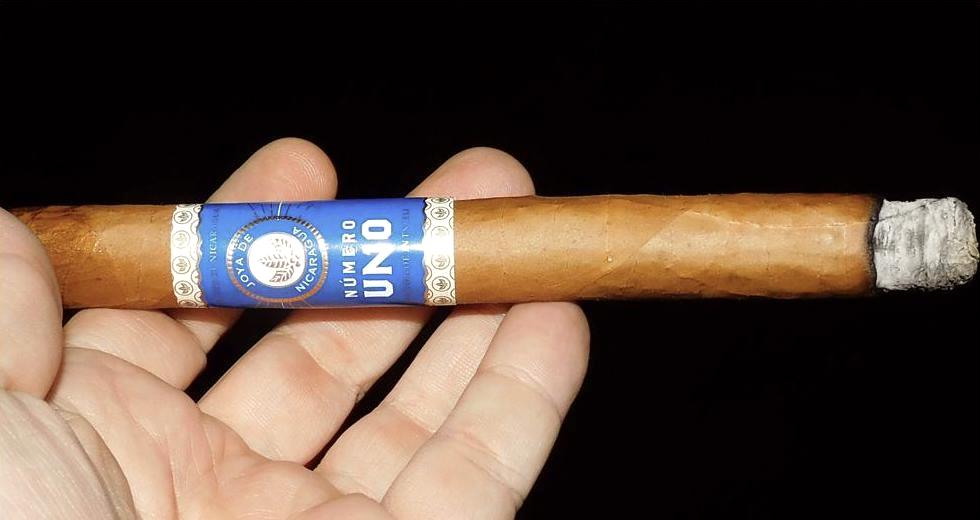 The Joya de Nicaragua Numero Uno L’Ambassaduer started out mild to medium in strength. The strength increased by a nominal amount during the first half and by the midway point, the strength had progressed to medium where the increase leveled off. As for the body, it started out as medium. It too increased in strength, but it never got out of the medium range.

In terms of strength versus body, the body maintained an edge with the gap closing between both attributes in the second half.

Overall the Joya de Nicaragua Numero Uno L’Ambassaduer is probably the best Connecticut Shade offering I have had from Joya de Nicaragua to date. In terms of the flavor profile, I found the first half to perform better than the second half. The second half still delivered above average flavor, but it was still hard to compete with what the Numero Uno L’Ambassaduer delivered in the first half. The cigar experience is enhanced by a nice amount of complexity and great construction. This is a cigar I would recommend to any cigar enthusiast. As for myself, this is a cigar I would smoke again – and buy multiples to keep in the humidor.