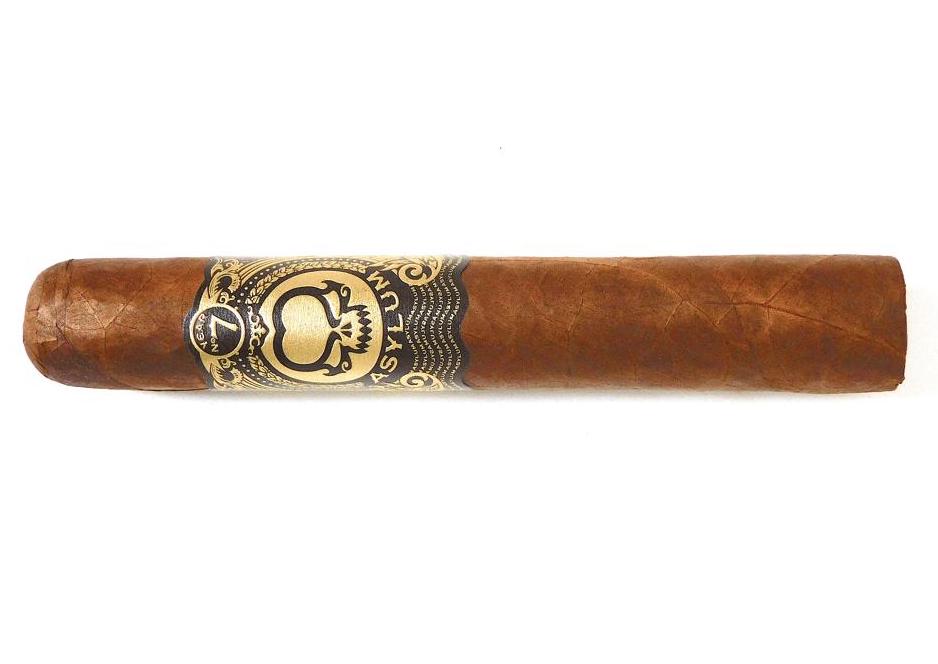 In 2012, Christian Eiroa returned to the cigar business after a brief hiatus. Back in 2008 the Eiroa family had sold Camacho Cigars to Davidoff, but Christian would stay on with Davidoff for a few more years. It was in July of 2012 that Christian would form CLE Cigar Company. CLE would be an umbrella for several brands, some directly run by Christian himself, and others where he would partner with industry people to help them develop a brand. One of those partnerships would be with Tom Lazuka, who Christian worked with at Camacho and now was also serving as CLE’s national sales manager. That brand would be Asylum Cigars, and it would eventually soar and become one of the workhorse brands of the CLE portfolio. Fast forward to 2019, and Asylum Cigars would still be strong and celebrate seven years in the cigar business. As a result, Asylum created a special ultra-premium offering to commemorate the milestone – appropriately called the Asylum Seven. Today we take a look at the Asylum Seven in the 70 x 7 size – a size Asylum helped popularize since the company launched.

Lazuka and Christian will tell you they didn’t invent the big ring gauge cigars, but they certainly helped popularize the “Super Gordo” size over the years. Asylum has pushed the envelope with its 70 and 80 ring gauge offerings. One thing they discovered was there was not an ultra-premium 60+ ring gauge cigar on the market. The goal of Asylum Seven was to deliver a big ring gauge offering to that segment of the market. Thus the 70 x 7 size, along with the popular (smaller ring) 11/18 figurado would be the two sizes selected for the Asylum Seven line.

Without further ado, let’s break down the Asylum Seven and see what this cigar brings to the table.

As mentioned the Asylum Seven comes in two sizes – the 70 x 7 and the 11/18. Each is packaged in individual coffins. The coffins are packaged in 20-count boxes. Production was limited to 1,000 boxes. 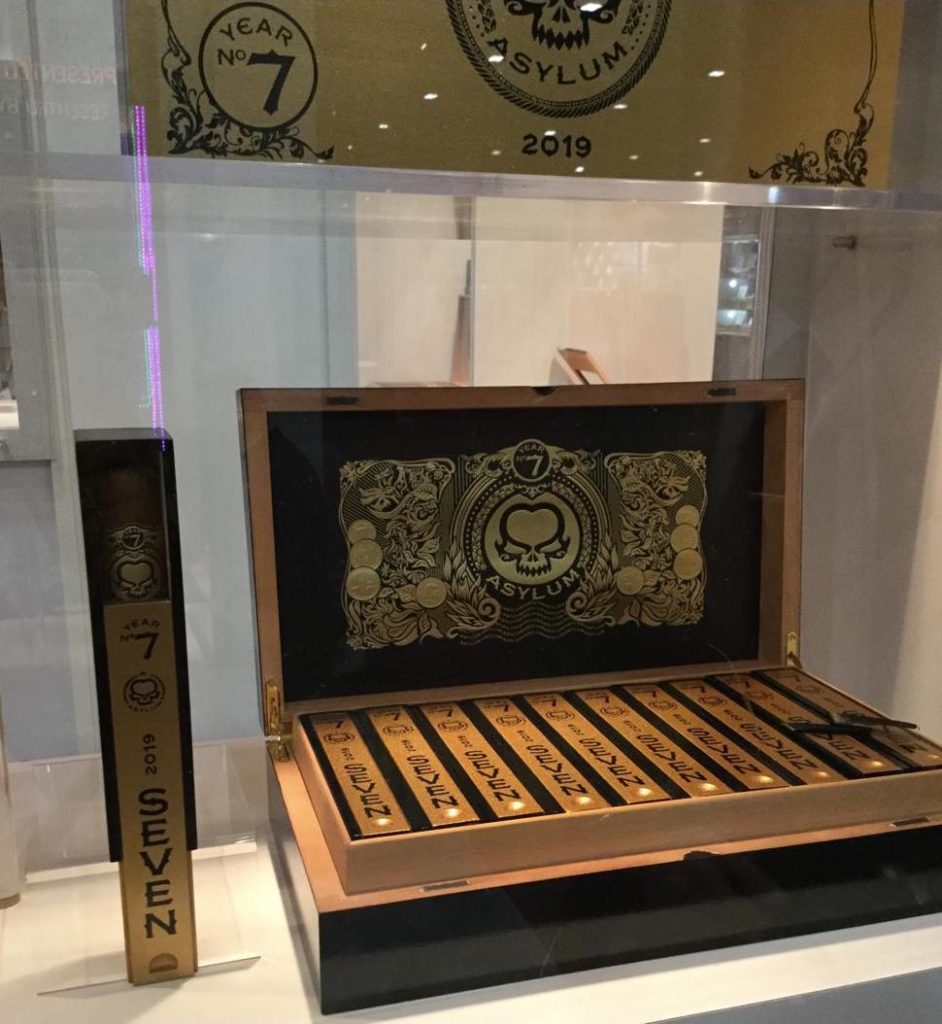 The Nicaraguan wrapper of the Asylum Seven 70 x 7 had a dark cinnamon color to it. Upon closer examination, some subtle mottling can be seen on the surface. The wrapper itself had a light sheen of oil on it. There were some visible veins and visible wrapper seams, but overall the wrapper still had an elegant look to it.

I’ve said this many times, the best way to cut a 70 ring gauge cigar is with a straight cut. I’ve also said it is very important to use a cutter that can handle a 70 ring gauge. That is exactly what I did with the Asylum Seven 70 x 7. Once the cap was removed, it on to the pre-light draw. The cold draw was simple as it yielded a mix of cedar and natural tobacco, but it was still very much enough to satisfy. At this point, it was time to light up the Asylum Seven 70 x 7 and see what the smoking experience would have in store.

The Asylum Seven 70 x 7 started out with notes of earth, cedar, natural tobacco, and plum sweetness. Early on the natural tobacco notes emerged as the primary note with the earth, cedar, and plum notes becoming secondary. Early on there was a light cedar note on the retro-hale. As the cigar moved deeper into the first third, the plum sweetness could also be detected on the retro-hale.

As the Asylum Seven 70 x 7 entered the second third, the earth notes moved into the forefront with the natural tobacco and briefly the two shared being the primary flavors. As the cigar progressed toward the midway point, a chocolate note emerged and took over as the primary note. The earth and natural tobacco remained close secondary notes. There was a decrease in the plum notes as they moved into the more distant background. Meanwhile, notes of cinnamon emerged in the background in the earlier part of the second third, while notes of black pepper emerged on the tongue later in the second third.

By the last third, the natural tobacco notes regained their position as a primary note. There was an increase in the cedar notes and they made their way to become primary notes. Meanwhile, the chocolate, earth, plum, cinnamon, and pepper remained in the background. This is the way the Asylum Seven 70 x 7 came to a close. The resulting nub was soft to the touch and cool in temperature.

The burn line of the Asylum Seven 70 x 7 did get jagged from time to time. This was remedied with some touch-ups along the way and this helped keep the Asylum Seven 70 x 7 on a straight track. The resulting ash had several shades of gray on it. This wasn’t an overly firm ash and there was some flaking along the way. The burn rate and burn temperature were ideal. This cigar needs a little over a three-hour commitment to smoke. 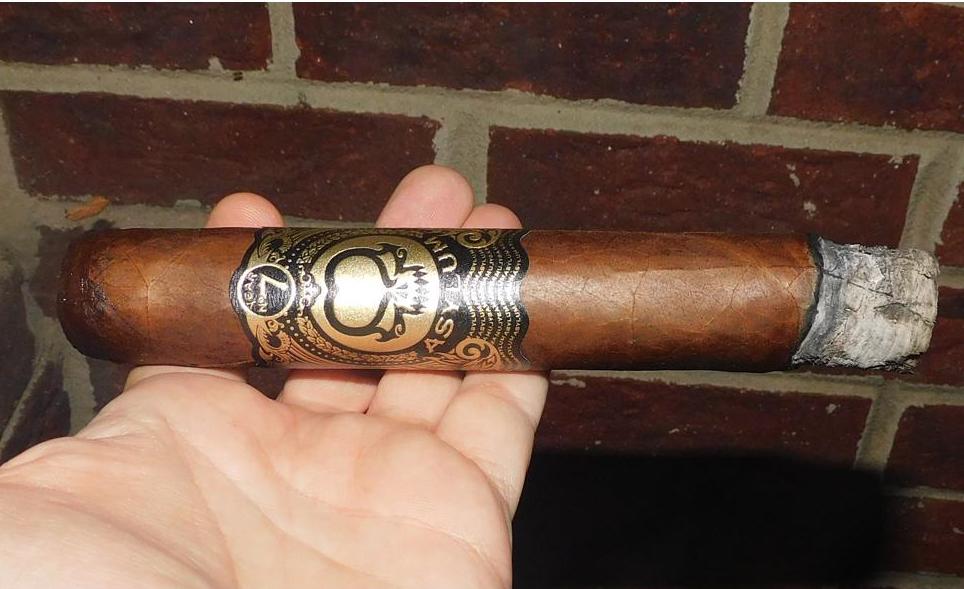 The rise of the Super Gordos over the past ten years has certainly drawn its share of criticism. Despite that, Asylum Cigars has had commercial success with some very good Super Gordos. With the Asylum Seven 70 x 7, Asylum Cigars delivers its best release to date. In fact, I think the 70 ring gauge smokes better than the 11/18. On top of that, this might be one of the all-time great 70 ring gauge releases. This is a cigar loaded with flavor and delivers a nice amount of complexity. This is a cigar I’d easily recommend to any cigar enthusiast – including someone who might normally not enjoy a big ring gauge. As for myself, while this is a pricey cigar, I would easily smoke this again – and pick up multiples to store in my humidor.