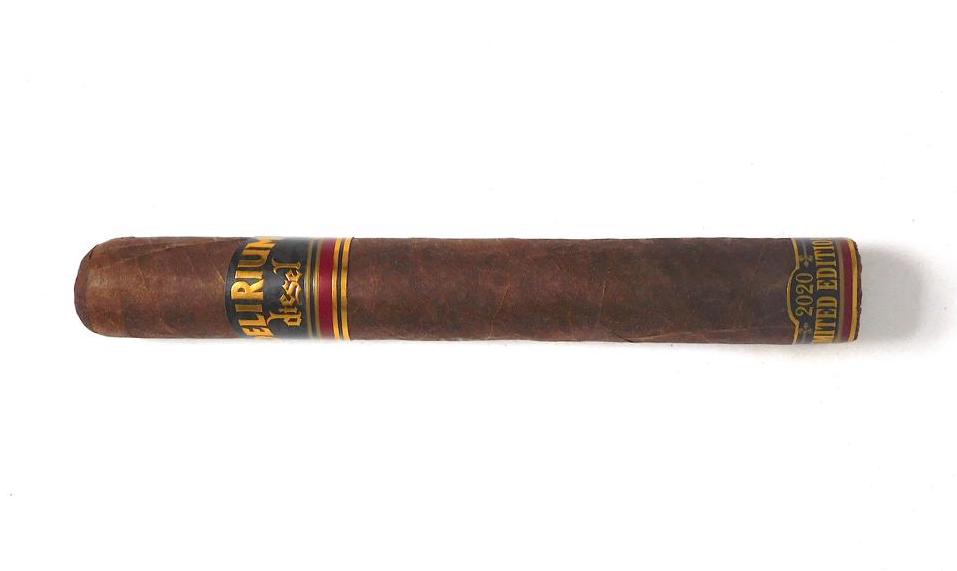 In the past few years, the story of the transformation of the Diesel brand has simply been remarkable. A little over three years ago, Diesel has a highly popular catalog brand offering in the Meier & Dutch portfolio when the decision was made to move the brand into his sister company, General Cigar Company and put a brick and mortar focus on it. Led by the success of the regular Diesel Whiskey Row and Diesel Whiskey Row Sherry Cask lines, that transformation has been successful. Complimenting the regular production lines are two limited edition lines – 2019’s Diesel Hair of the Dog and 2020’s Diesel Delirium. Today we take a closer look at the Diesel Delirium.

One common denominator with the Diesel brand is that it has been one that has come out of AJ Fernandez’s factory in Nicaragua – and Diesel Delirium is no exception. Since Diesel moved into the General Cigar portfolio, it has been under the watch of General Cigar Senior Brand Manager Justin Andrews. As for Diesel Delirium, it actually was a line that traces back to 2014. It’s worth noting that the 2020 version is quite different and it features a revamped blend. The brand has positioned Diesel Delirium as a powerhouse cigar.

Without further ado, let’s break down the Diesel Delirium and see what this cigar brings to the table.

The blend features an Ecuadorian Sumatra wrapper, Connecticut Broadleaf wrapper and Nicaraguan tobaccos for the filler. Included in the filler are lager primings and tobacco from the island of Ometepe located in Lake Nicaragua. 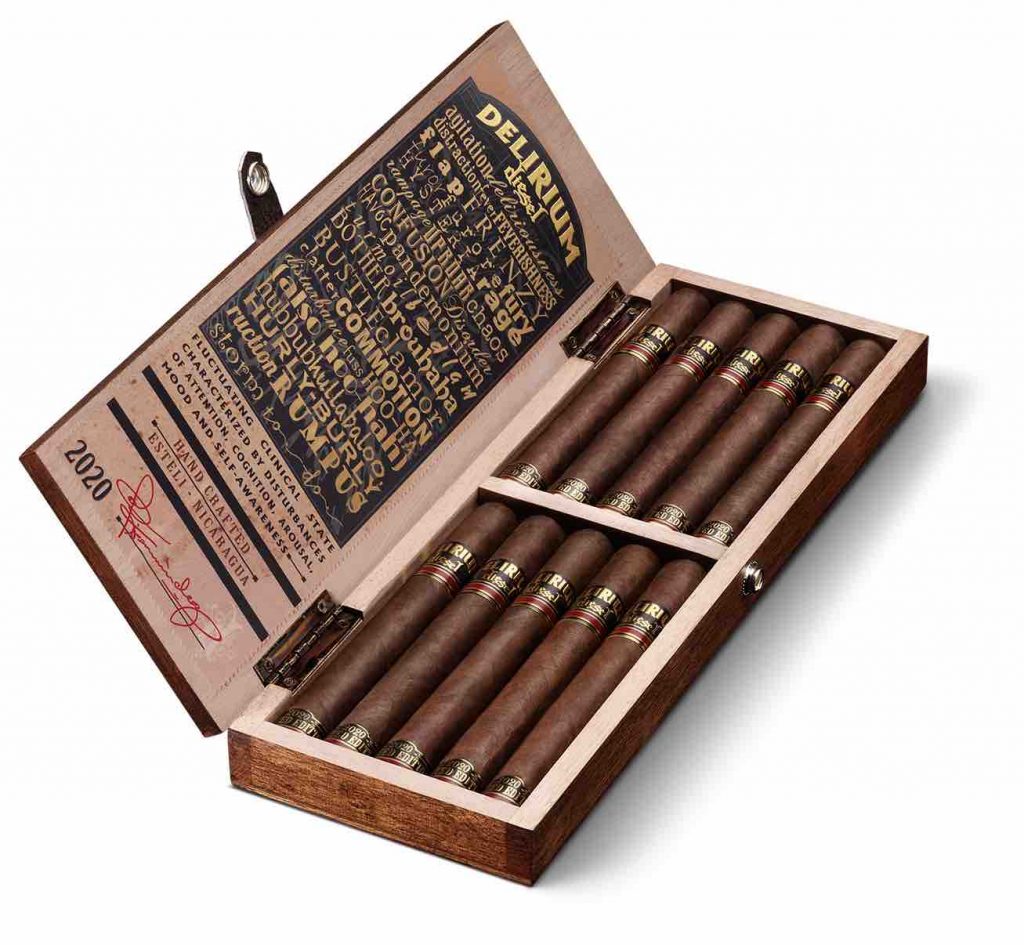 The Ecuadorian Sumatra wrapper of the Diesel Delirium is on the dark side. It has a chocolate brown color with a slight amount of mottling on it. There wasn’t much in the way of oil on the surface of the wrapper. At the same time, there was a slight enough of toothiness to it. There were some visible veins and visible wrapper seams.

There are two bands on the Diesel Delirium. The primary band has a thick stripe with a textured gray color. The lower part of the band has gold, gray, and maroon striping. On the center of the top of the band has the text “DELIRIUM” in large gold font. Below that text is the text “diesel” in a classic English-style font.

The secondary band is on the footer of the band. It has a gray background with gold and maroon trim. The center portion of the band has the text “2020” in gold font with the text “LIMITED EDITION” below it.

The Diesel Delirium started out with notes of earth, mineral, chocolate, and black pepper. There was no dominant note early on, but by the midway point of the first third, the chocolate notes surfaced in the forefront. There was an inherent sweetness to the chocolate notes. Meanwhile, the retro-hale delivered a strong dose of black and red pepper.

By the last third, the pepper and cedar joined the earth in the forefront. There still were notes of mineral in the background but the chocolate notes had dissipated. This is the way the Diesel Delirium came to a close. The resulting nub was slightly soft to the touch and cool in temperature.

Overall the burn of the Diesel Delirium performed stellarly. This is a cigar that maintained a straight burn path and straight burn line – not requiring an excessive amount of touch-ups. The resulting ash was tight and firm with light gray color. The burn rate and burn temperature were both ideal. 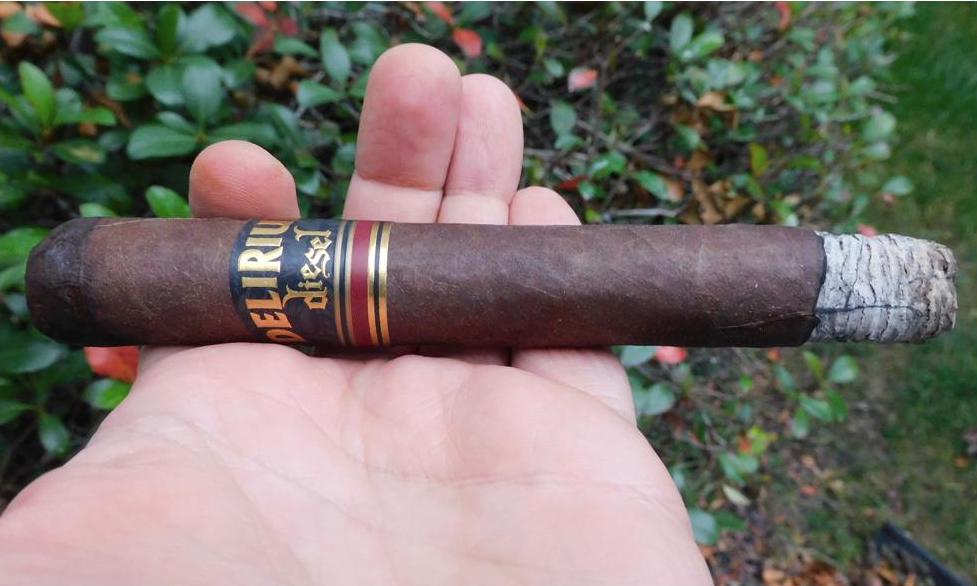 Burn of the of the Diesel Delirium

The draw to the Diesel Delirium also performed quite well. There was a touch of resistance putting this into the sweet-spot in my book. At the same time, this was a low maintenance cigar to derive flavor from.

The Diesel Delirium started out with medium to full strength and medium to full-body. Both attributes increased in intensity in a linear manner. By the midway point, both the strength and body were in full territory. During the second half, this was as bold a cigar as I had from the General Cigar portfolio.

At the same time, the strength and body balanced each other nicely with neither attribute overshadowing the other.

The Diesel Delirium delivers a powerhouse of a smoke – particularly in the second half. While it’s a cigar that delivers a punch, it is not one that sacrifices flavor. The flavors are well balanced. The problem is when I look at the flavors produced on this cigar versus other Diesel cigars, they are good – but not at the level of the other Diesel releases I have had over the past two years. Still, this is a cigar that fills a void in the Diesel portfolio – namely a stronger, bolder smoke. As a result, this is a cigar I would recommend to a more seasoned cigar enthusiast. As for myself, this is a cigar I would still purchase and smoke again.