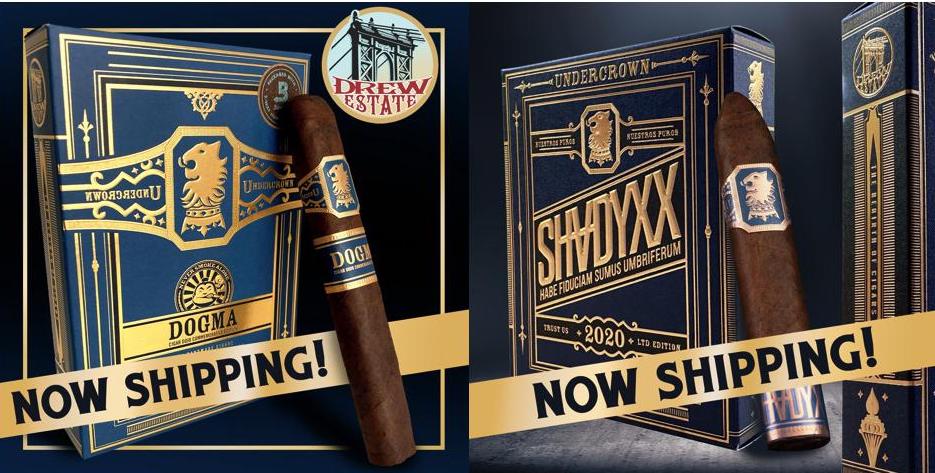 The Dogma was first released in 2014 as a small batch limited production sold initially through Smoke Inn. It’s a  6 x 56 Box Pressed Gran Toro that is based off the Undercrown Corona ¡Viva!, a slightly tweaked version of the original Undercrown line. This cigar was brought back as an annual limited edition in 2018 and 2020 is the third consecutive year that the Undercrown Dojo Dogma Maduro has been released. It’s also the second consecutive year Dogma is receiving a packaging change. This year the Undercrown Dogma Maduro will be available in ten-count petacas priced at $107.87.

Also making a return for the second straight year is the Undercrown ShadyXX. The origins of the ShadyXX actually trace back to 2014 when Drew Estate and Shady Records collaborated for the Undercrown ShadyXV to commemorate Shady Records’ 15th anniversary. The cigar was originally released as a Detroit, Michigan regional exclusive and was a 5 x 50 box-pressed belicoso based on the Undercrown Corona ¡Viva! blend. In 2019 for the 20th anniversary of Shady Records, Drew Estate brought this cigar back – branded as the ShadyXX. This cigar was released nationwide for Drew Diplomat retailers in 2019. The ShadyXX featured the same blend and size with updated packaging. Now the ShadyXX returns for another limited production run for 2020. The cigar is packaged in ten-count petacas which have had their design modified to reflect the 2020 release. Pricing is set at $104.00 per petaca.

In a press release Jonathan Drew, president and founder of Drew Estate, adds, “Both Eminem and Drew Estate were quintessential underdogs. Everyone laughed at the two of us, claiming that we didn’t have a chance, that we didn’t fit the mold, and that we didn’t belong. Well … of course the story reads on and ya’ll know how it ends up … both underdogs rise above to break the mold and become legends. The Shady Series celebrates the Drew Estate torcedors in Nicaragua for their contribution to the world of cigars … determination, raw talent, and natural bad-ass-ness … as they birthed the prince of a cigar brand that we call Undercrown. Oh, and in regard to the Dojo Dogma … well that shit’s just straight fire … Nuff said !!”

For more details, see our Summer of 20 coverage: