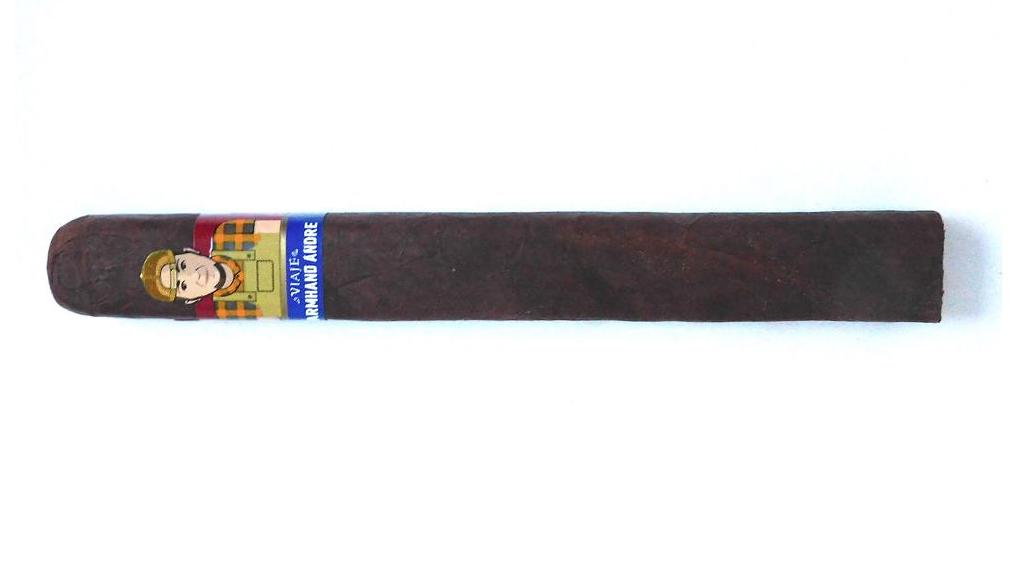 Seasonal/holiday releases are not a new concept for the cigar industry, but when it comes to Thanksgiving, Viaje Cigars is the company that blazed the trail. Viaje’s Thanksgiving releases trace back to 2011 when it released its first Viaje Stuffed Turkey Cigar. The concept for a Thanksgiving cigar was originally suggested by the Stogie Review team during an interview with founder Andre Farkas earlier that year. The Stuffed Turkey was released in 2011 as a White Label Project (WLP), but a couple of years later, the Stuffed Turkey was in two flavors – White Meat and Dark Meat and it now had its own packaging. Since then, the Thanksgiving releases have grown to seven releases. Today we take a look at the sixth installment of the series – the Viaje Farmhand Andre.

(*) Indicates the cigar was not released in the weeks leading up to Thanksgiving, but another time of the year.

We turn our attention to Farmhand Andre, a cigar that was first released in 2019. It features the likeness of Andre Farkas on the band.

There is virtually no information released about the blend or origin of the Viaje Farmhand Andre.

Viaje Farmhand Andre is a 7 x 52 box-pressed vitola (the same dimensions as Farmer Bill Hatchet). The cigar is packaged in ten-count bundles. As with most Viaje releases, this was a single small batch release with quantities not disclosed. 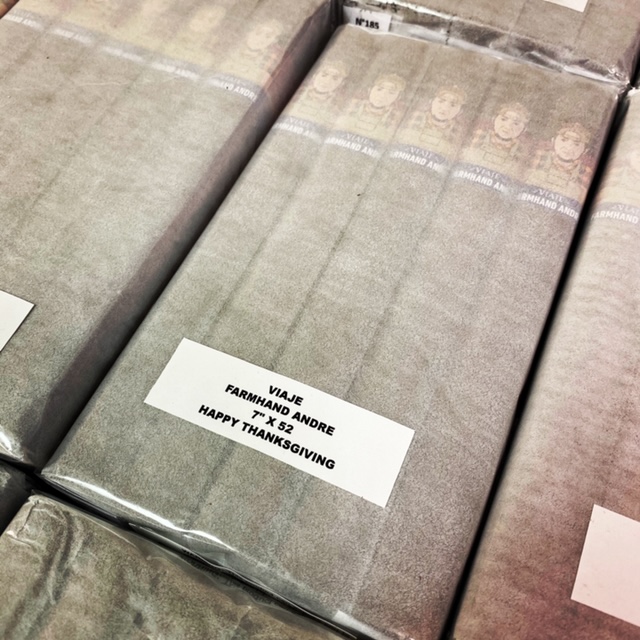 The wrapper of the Farmhand Andre has an espresso bean color with some mottling on the surface. There wasn’t much in the way of oil on it. There are some visible veins and there are very few visible wrapper seams. This is a thinner rectangular shaped box-press. The box-press is on the sharper side.

The band has a similar design to the new bands for the Viaje Farmer Bill Hatchet – and of course the “Farmhand Andre” character instead of Farmer Bill Hatchet.  The upper portion (approximately 2/3) of the band has a dark red background and the lower portion of the band has a purple background.  A gold stripe separates the two backgrounds. The “Farmhand Andre” character sits on the upper portion.  He is also dressed in a plaid shirt with beige overalls.  The character is also wearing a beige cap and holds a pitchfork with his left hand.  To the left and right of “Farmer Bill” are gold-trimmed forks and knives. The lower (purple) portion of the band has the “VIAJE” logo text in white font. Below that is the text “FARMHAND ANDRE” in larger white font. To the left and right of the text are gold-trimmed cooked turkeys.

A straight cut was used to remove the cap of the Viaje Farmhand Andre. Once the cap was removed it was on to the pre-light draw phase. The cold draw was a mix of mocha and cedar. The mocha was a fusion of chocolate and coffee notes. This was a straight-forward pre-light draw, but one that was satisfactory. At this point it was time to light up the Viaje Farmhand Andre and move on to the smoking phase.

The Viaje Farmhand Andre started off with more notes of mocha and cedar as well as some notes of earth and black pepper. Early on the earth notes moved to the forefront. The mocha, cedar, and pepper notes settled in the background. These background notes were joined by some notes of citrus. During the first third, the mocha notes dissipated and were replaced by a slight metallic note. Meanwhile, the retro-hale delivered extra layers of black pepper and cedar.

During the second third of Viaje Farmhand Andre the earth notes remained grounded in the forefront. There was a slow gradual increase of the black pepper notes in the background. Concurrently, the citrus, cedar, and metallic notes were also present in the background.

By the final third, the earth notes were still present in the forefront. The black pepper was the most prominent of the secondary flavors, but there still were citrus, cedar, and metallic notes. This is the way the cigar experience to Farmhand Andre came to a close. The resulting nub was soft to the touch and cool in temperature.

The Viaje Farmhand Andre started out with a straight burn path and straight burn line. As the cigar experience progressed the cigar did require more in the way of touch-ups to maintain the straight path and straight line. The resulting ash wasn’t overly firm, but not loose either. The ash had some minor flaking as well. This was an ash that had a silver-gray color to it. Meanwhile, the burn rate and burn temperature were both ideal. 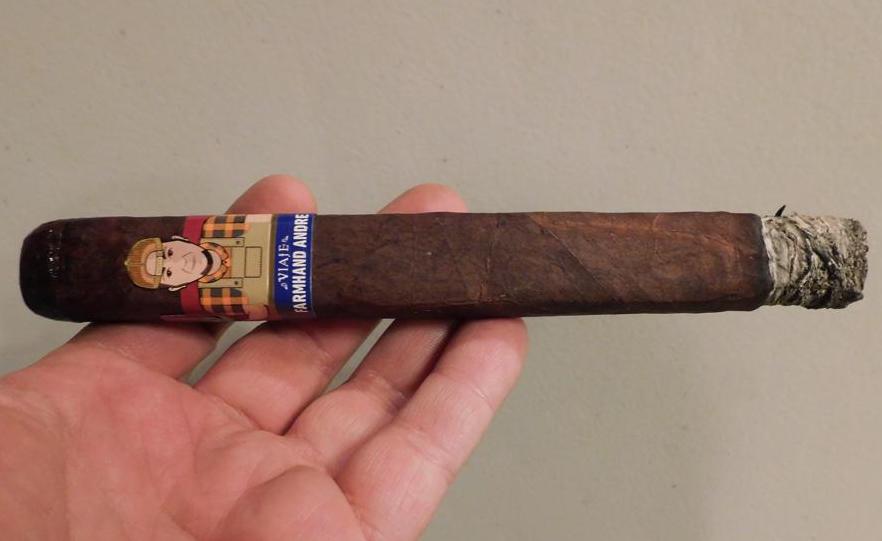 Normally I like a little resistance on a draw, and many times with box-press cigars I find the draw to be looser than I prefer. In the case of the Viaje Farmhand Andre, I found there were points when the draw was tighter than I prefer. The cigar wasn’t plugged, but I would have preferred more openness in this case.

The Viaje Farmhand Andre delivered a medium strength, medium-bodied smoke from start to finish. Throughout the smoking experience there was little variance in the intensity levels of the strength and body. In terms of strength versus body, there was a slight edge to the strength, but it was not at the sacrifice of the flavor of the cigar.

The early part of the smoking experience of the Viaje Farmhand Andre was quite promising, but once the mocha notes dissipated, the cigar got relatively flat and boring. Given there was still some six inches of cigar to go, I was hoping at some point things would get more interesting. This simply did not happen. In the end, there have been better Viaje Thanksgiving releases (i.e. Stuffed Turkey Dark Meat and the original Farmer Bill Hatchet). The Farmhand Andre is probably hard to find, but I’d recommend trying a sample first if you can before committing to it.