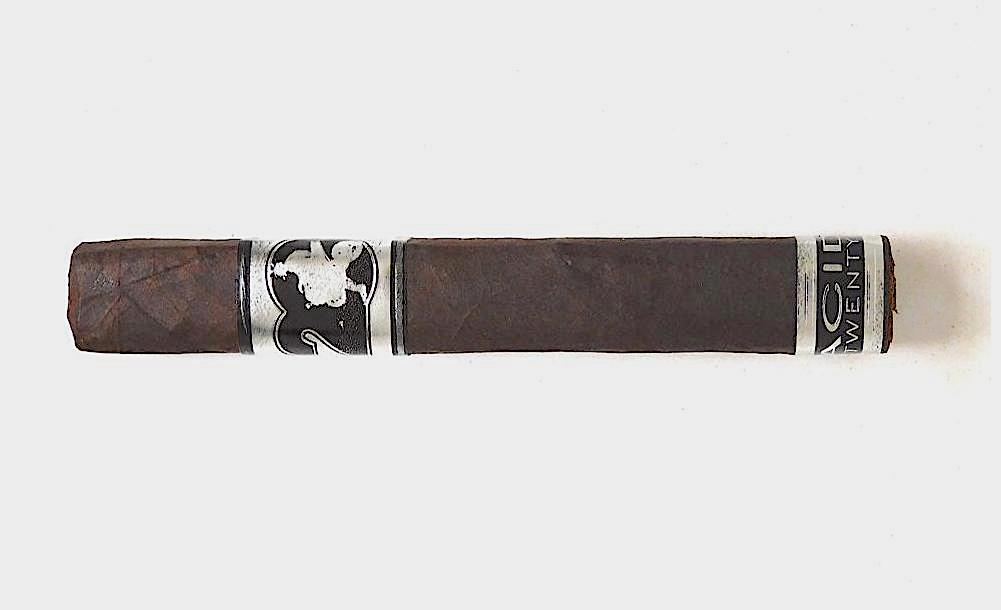 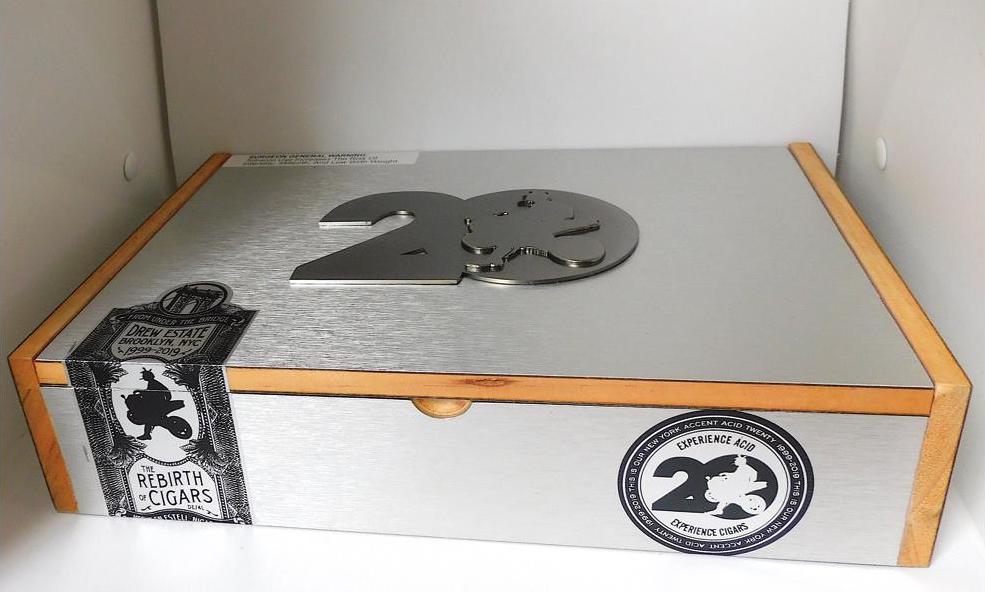 Closed box of the ACID 20 Robusto

At the time ACID 20 was launched, Drew Estate President Jonathan Drew explained the vision for the ACID 20:

“20 Years is a tremendous milestone to reach for any brand, but in this special moment we didn’t want to rest on our past successes. We challenged the entire company to produce an ACID cigar that could rival Kuba Kuba, and I am proud to report they have delivered excellence… From the chromed-out packaging, to the burst of taste and aroma once lit ACID 20 defines the next twenty years of the ACID legacy.”

At press time, there are two sizes of the ACID 20 offered using a San Andres wrapper. Last year, Drew Estate released a second release called the ACID 20 Bronxilla. The Bronxilla uses a Ecuadorian Connecticut Shade wrapper and it is distributed exclusively by Alliance Cigar.

Without further ado, let’s break down the ACID 20 Robusto and see what this cigar brings to the table.

In addition to the Mexican San Andres wrapper, the ACID 20 features an Indonesian binder and all Nicaraguan fillers Production is handled out of Drew Estate’s La Gran Fabrica facility in Estelí, Nicaragua.

When ACID 20 launched in 2019, it was originally launched in one size – a 5 x 50 Robusto. The following year a 6 x 50 Toro was added along with a Tubo offering for the Robusto. The Robusto size is box-pressed while the Toro size is a parejo. 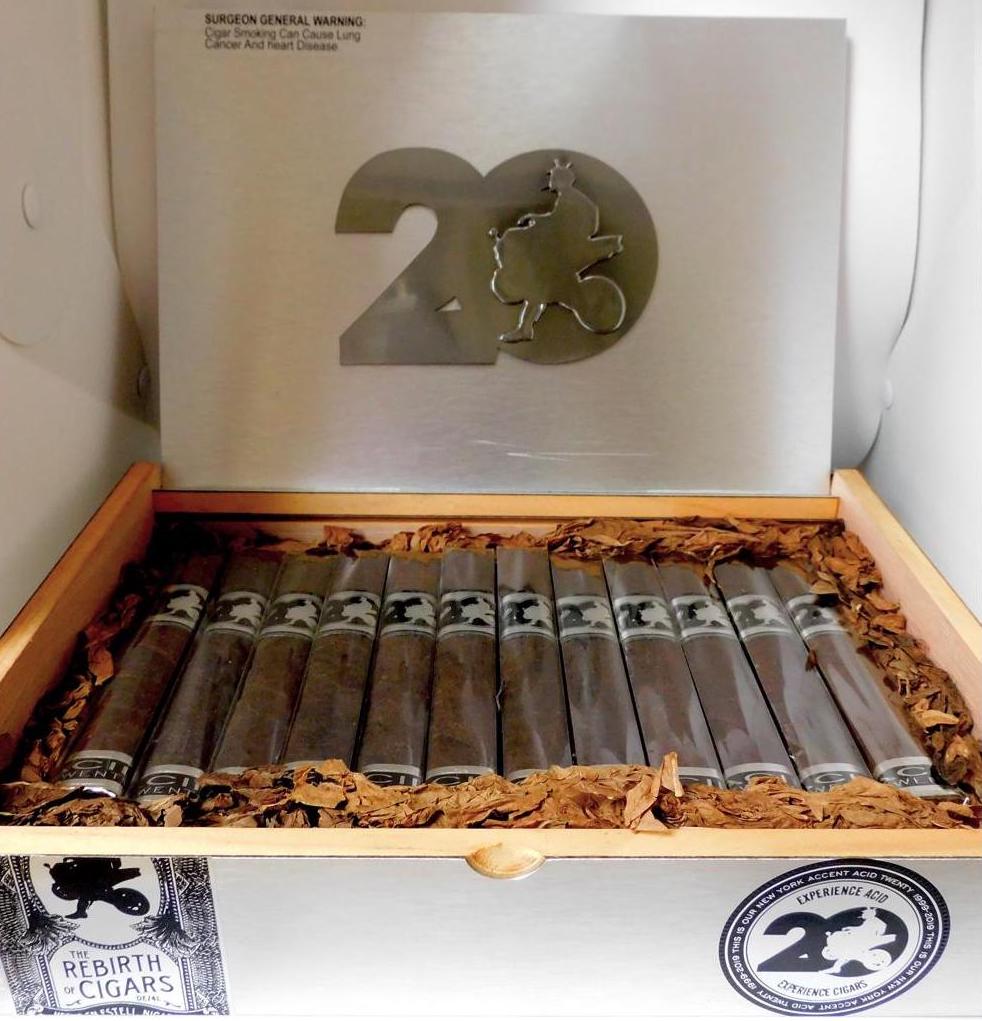 Open box of the ACID 20 Robusto

The San Andres wrapper of the ACID 20 Robusto had a dark espresso color to it. This was a wrapper that didn’t have much in the way of oils on it. It was smooth with a somewhat silky complexion to it. There were some thin veins and thin wrapper seams. The box press was a square press skewed more toward the firmer side. The cigar itself had a very flat cap. 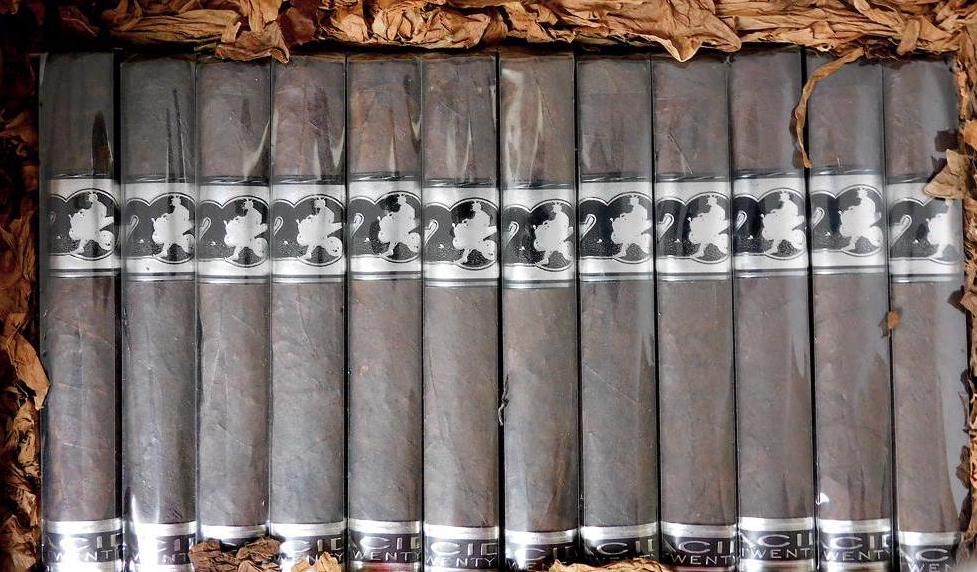 There are two bands on the ACID 20 Robusto. The primary band is silver and black. On the band is a large black 20 with a silver silhouette of the ACID logo. The band is finished with black trim on it.

The secondary band is black in color with two thick silver stripes. On that band is the text “ACID TWENTY” in silver font.

A straight cut was used to remove the cap of the ACID 20 Robusto. This is a cap you might want to use a razor blade to use as opposed to a cutter as it requires a delicate and very thin incision. Once the cap was removed it was on to the pre-light draw. This is a cigar that has a sweetened cap and you still are going to get a lot of residual sweetness on the pre-light draw. This sweetness had an artificial sweetener taste. While there were notes of licorice and coffee, the sweetness was still too overpowering for me. Since the pre-light experience is not factored into the score or rating there was no loss of points here. At this point, it was time to remove the footer band of the ACID 20 Robusto, light up the cigar, and proceed right into the smoking phase.

The ACID 20 Robusto kicked off with notes of mocha, earth, licorice, and the residual sweetness from the sweetened cap. The mocha notes reflected a fusion of chocolate and coffee notes. It was the mocha notes that took center stage as the primary note with the earth, licorice, and cap sweetness settling into the background. Some white pepper notes emerged on the tongue during the first half. The white pepper was already the main note on the retro-hale.

During the second third of the ACID 20 Robusto the mocha notes morphed into more of a classic coffee note. The chocolate component slowly dissipated. Meanwhile the coffee notes were rounded out by earth, licorice,and white pepper. The residual sweetness from the cap also slowly diminished, but didn’t completely vanish. Concurrently, there was a slight increase of white pepper on the tongue.

The last third of the cigar didn’t see much change. The coffee notes remained primary. There still were notes of earth, licorice, white pepper, and some remaining residual cap sweetness remaining. While there was more pepper in this stage of the cigar than at any other point the pepper was not overpowering. As the ACID 20 Robusto came to a close, the resulting nub was soft to the touch and cool in temperature.

The burn of the ACID 20 Robusto scored very nicely. This is a cigar that maintained a straight burn path and had a relatively straight burn line. At the same time, this was a burn that didn’t require frequent touch-ups. The cigar produced a light charcoal ash that was skewed toward the firmer side. The burn rate and burn temperature were both ideal. 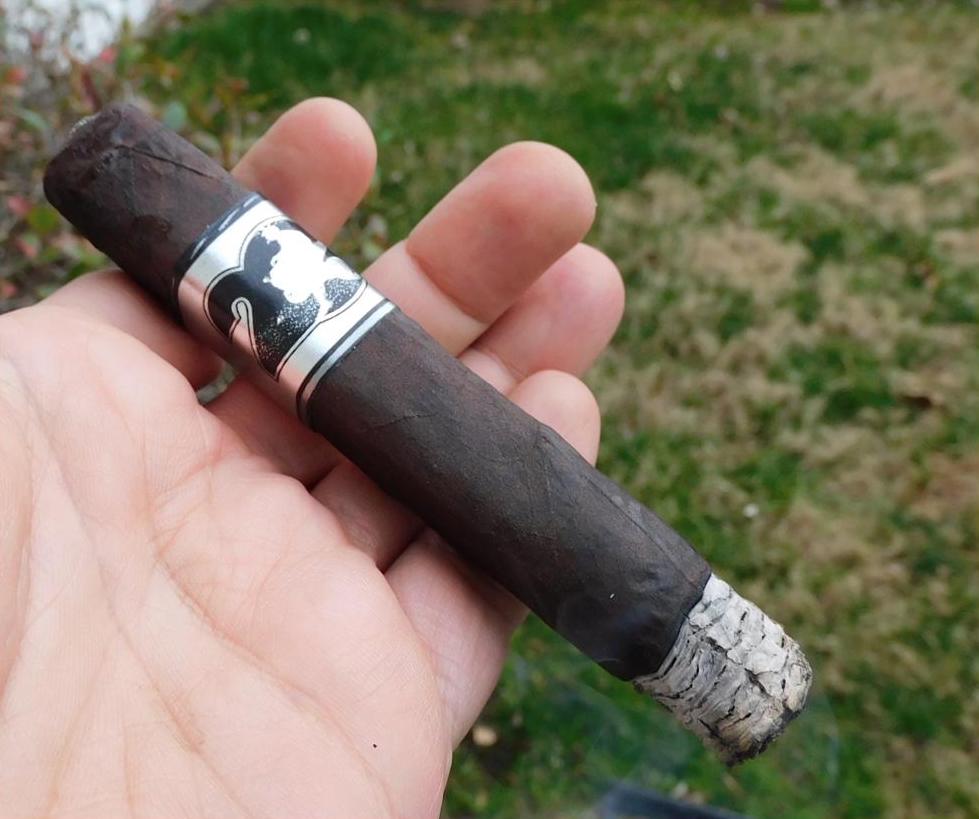 Burn of the ACID 20 Robusto

The draw to the ACID 20 Robusto was open. It wasn’t loose, but it was more open that I prefer. It didn’t have any adverse effects other than I just prefer a little more resistance on a draw. At the same time, the ACID 20 Robusto is a cigar that produced abundant layers of smoke.

The ACID 20 Robusto is not going to be a powerhouse cigar in terms of strength and body. Strengthwise, this is a cigar that started mild to medium in strength. By the second half, the strength level crossed into medium territory where it remained. The body pretty much was also in the medium range. Overall when it came to strength versus body, the body maintained an edge throughout the smoking experience.

Cigar Coop does not do a lot of infused cigar reviews, we haven’t avoided infused reviews, but  it’s not our focus. That being said, the ACID 20 is an important release, so it is one we are reviewing. I’ve seen a couple of cigar sites say they use a different methodology with infused cigars than with traditional cigars. On Cigar Coop an infused cigar is scored the same way as a traditional one. Typically infused cigars don’t score well in the areas of complexity and balance.  With the ACID 20 Robusto, while the cigar didn’t get high marks on complexity and balance, it didn’t score badly here. I felt the ACID 20 was hampered by the residual sweetness from the cap. In the end, it did impact the flavors from the tobacco. At the same time, it didn’t impact as bad as some other infused cigars that use a sweetened cap.

In the end, I still found the ACID 20 Robusto to be an good cigar. It’s one of the better infused cigars I’ve had. I’d recommend it to anyone who is open to and/or enjoys infused cigars. As for myself, I can see this cigar as one I could smoke and enjoy again.