Agile Cigar Reviews are cigar assessments where we use a lightweight, shorter format. These will never take the place of our comprehensive reviews. They are only used on blends we have previously assessed. This might be a blend we are re-scoring or giving a score for the first time. It might be a blend we are looking at in a different size. Today we look at the ACID 20 Toro by Drew Estate. This is a cigar line we previously assessed in the Robusto size back in March 2020. 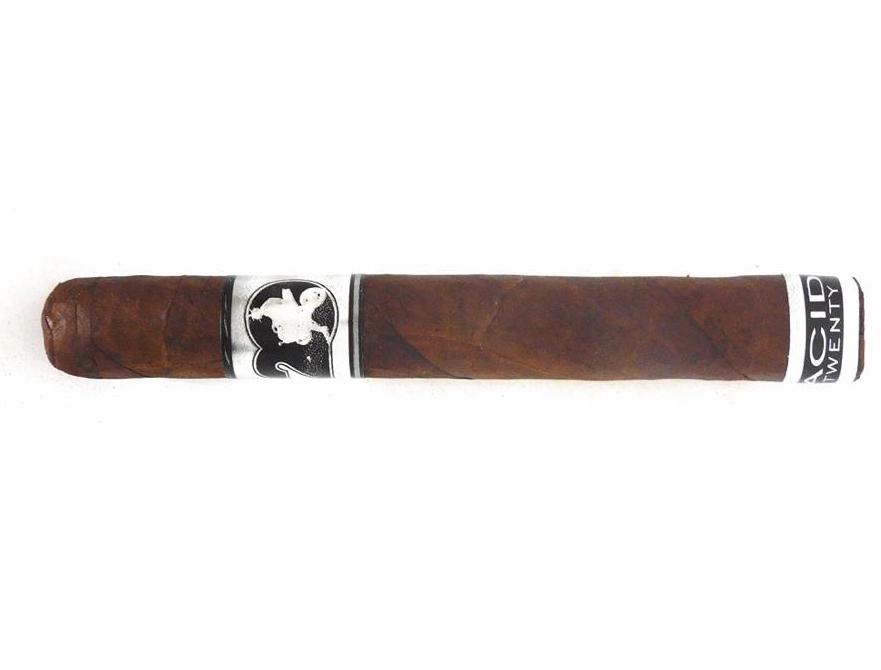 There have been a lot of milestones at Drew Estate over the past few years. 2021 is seeing the company celebrate its 25th anniversary. There have been ten-year anniversaries for brands such as Liga Privada (2018) and Undercrown (2011). Perhaps the most important milestone was in 2019 when the ACID brand celebrated its 20th anniversary. ACID was important because it became a game-changer in terms of infused cigars. It also laid the foundation for Drew Estate as a premium cigar and tobacco company. To celebrate the 20-year milestone, Drew Estate would launch two cigars: the limited edition ACID Kuba Arte, and a new ongoing line appropriately titled the ACID 20. ACID 20 was originally released in a Robusto, but in 2020 a second size was added in the form of a 6 x 50 Toro. Today we take a closer look at the ACID 20 Toro.

The ACID 20 utilizes a Mexican San Andres wrapper over an Indonesian binder and filler tobaccos from Nicaragua. As for the infusion, it’s something that Drew Estate has kept proprietary – much like the rest of the ACID line. Like the Robusto size that preceded it, the ACID 20 Toro is box-pressed, although the Toro size seems to have a softer styled box press than the Robusto.

The ACID 20 Toro kicked off with notes of mocha, earth, licorice, and the residual sweetness from the sweetened cap. In this case, the mocha was a fusion between chocolate and coffee notes. With the residual sweetness from the cap, this took on a very sweet profile. The first third saw a combination of the mocha and licorice notes in the forefront. During the early phases, some white pepper emerged. By the second third, the chocolate notes started to dissipate, resulting in the mocha morphing into a straight coffee note. The white pepper slowly increased. By the last third, the white pepper closed in on the licorice notes in the forefront. There was still enough sweetness from the licorice and remaining residual sweetness where these notes were very much in control. The notes of coffee and earth rounded out the flavor profile during this phase of the smoke.

The ACID 20 delivered a mild to medium cigar in terms of strength, but flavors that were medium in body. There was a subtle increase in the intensity of both attributes, but in the end, this was a cigar that remained mild to medium in strength and medium in body. Burn-wise, the ACID 20 did need frequent touch-ups to keep the burn path and burn line strength As for the draw, it was somewhat on the open side.

There were a lot of parallels between the ACID 20 Toro and ACID 20 Robusto in terms of flavors and overall experience. I’d give a slight edge to the Robusto in this case and that came down to the fact that the Robusto performed better in terms of burn. As I mentioned when I reviewed the Robusto, unlike some other review sites we score infused cigars the same way as traditional ones. Typically on Cigar Coop, infused cigars score lower in terms of complexity and balance. Like the Robusto, the ACID 20 Toro didn’t get high marks on complexity and balance – but at the same time, it didn’t score badly here. The ACID 20 Toro strengthens the ACID 20 line as a whole. It’s a cigar I would recommend to a cigar enthusiast who likes infused cigars. As for myself, it’s a cigar I would smoke and buy again.