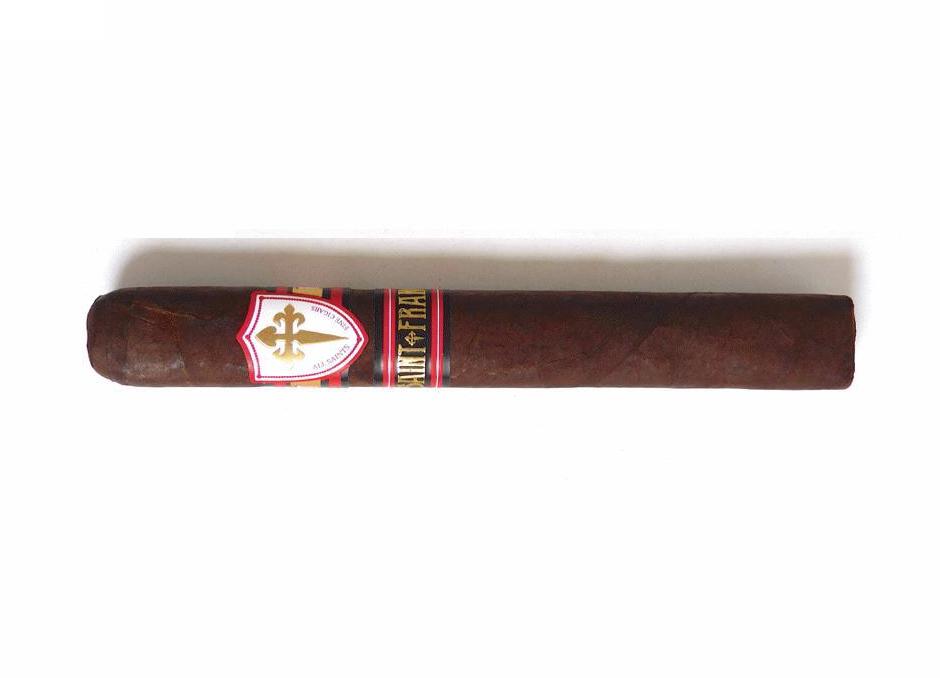 St. Francis is the second regular production brand to come out of Micky Pegg‘s All Saints Fine Cigars. At Tobacco Plus Expo (TPE) 2021, the St. Francis Oscuro line would be announced and then a couple of months later, a second blend, the St. Francis Colorado would be announced. For the production of all of his lines, Pegg is working with the TAVICUSA factory – the factory in Estelí, Nicaragua owned by Rocky Patel. The company name is All Saints Fine Cigars, but St. Francis is the first line to actually have a saint’s name as the brand (the previous lines are Dedicación and the limited edition Solamente). Today we take a closer look at the St. Francis Oscuro in the Toro size. 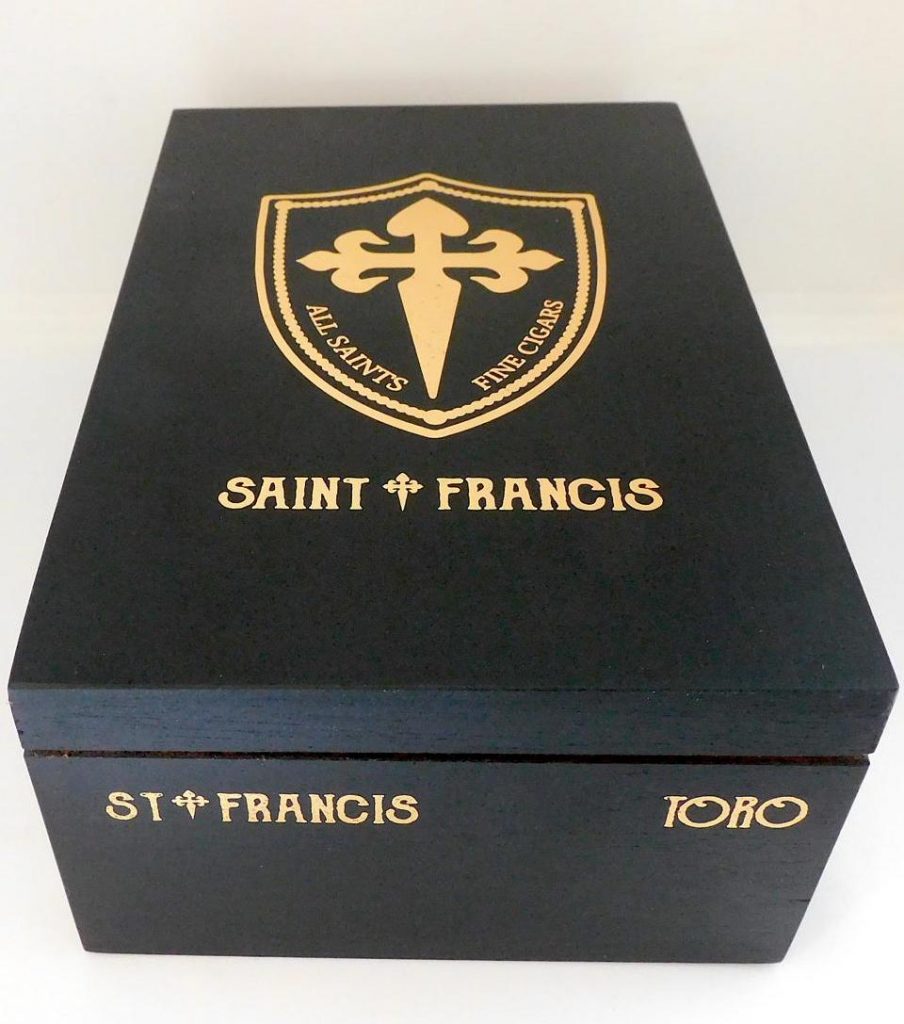 Closed box of the All Saints St. Francis Oscuro Toro

It was late in 2019 when we heard that industry veteran Micky Pegg was returning to the cigar industry. Pegg was best known for being the Vice President of Sales at CAO Cigars, and prior to that, his time with Davidoff, Felipe Gregorio Cigars, and Georgetown Tobacco. Shortly after CAO was absorbed into General Cigar Company, Pegg would take a hiatus from the cigar industry. Much like many who leave the cigar industry, they are eventually drawn back in. Pegg soon decided to come back to the industry and launch a company. That company would be All Saints Cigars.

For the most part, the recipe of the St. Francis Oscuro is one that we have seen on many cigars out of TAVICUSA. The cigar is highlighted by an Oscuro wrapper that is actually a dark Ecuadorian Habano leaf (Oscuro translates to dark). The remainder of the blend is highlighted by all-Nicaraguan fillers.

St. Francis is offered in four sizes. Three of the cigars are in a box-pressed format. There is one size dubbed “Huge” which is actually a rounded parejo. Each of the four sizes is presented in 20-count boxes. 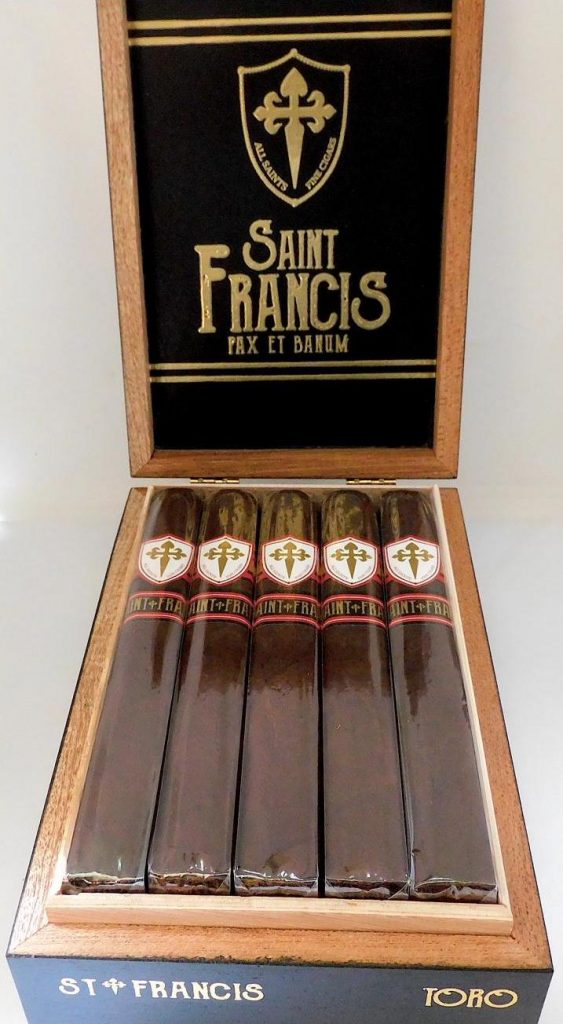 Open box of the All Saints St. Francis Oscuro Toro

The Ecuadorian Habano Oscuro wrapper of the St. Francis Oscuro Toro had a classic chocolate bar look to it. There was a slight amount of oil on the surface of the wrapper. The wrapper had some visible seams and some thin visible veins, but overall had a smooth appearance to it. This is a sharper cornered box press compared to the Cuban Soft Press style. 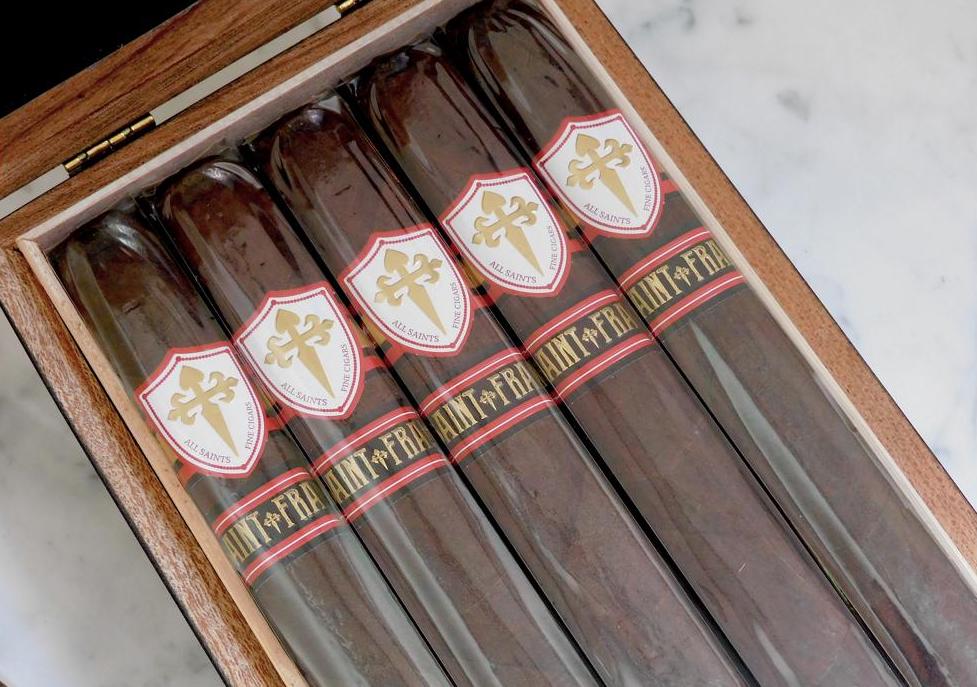 Close up of the All Saints St. Francis Oscuro Toro

There are two bands on the All Saints St. Francis. The primary band has a white shield with red trim on it. On the center of the shield is a gold cross of St. James, who happens to be the patron Saint of Nicaragua. Just under the cross is the text “ALL SAINTS CIGARS” in red font.  To the left and right there is a horizontal gold stripe with a red stripe just above and below it – all on white background. On the left gold stripe is the text “PAX  ET” in white font with red trim. On the right gold stripe is the text “BONUM” – also in white font with red trim. “Pax et Bonum” is Latin for “Peace and Goodness”) and was the traditional welcome and parting phrase used by St. Francis of Assisi each time he came in contact with someone.

The second band is white with black with red, white, and black striping near the top and bottom. On the center of the band is the text “SAINT FRANCIS” in gold font with a St. James cross in between the words.  The “T” in “SOLAMENTE” is actually replaced with the cross of St. James.

Right out of the gate there were notes of coffee, black pepper, citrus, baker’s spice, cedar, and chocolate. While the pre-light draw definitely had the coffee and chocolate notes more fused, once this cigar was lit, these notes were separate and distinct. Early on the coffee notes moved into the forefront. The other notes settled in the background. While the pepper wasn’t prominent on the tongue, it was much more detectable on the retro-hale.

The second third of the St. Francis Oscuro Toro saw the coffee notes remain grounded. The black pepper, citrus, baker’s spice, and chocolate remained in the background. During this phase, there was an increase in both the pepper and the cedar notes.

The last third continued to see the coffee notes dominant. The pepper and cedar were much more prominent, but both notes were still very much secondary. The baker’s spice and citrus were more distant and the chocolate notes dissipated. This is the way the St. Francis Oscuro Toro came to a close. The resulting nub was soft to the touch and cool in temperature.

The burn to the St. Francis Oscuro Toro started out well, but as the cigar progressed, it became more problematic. The burn line was jagged at times and required more frequent touch-ups to prevent the cigar from meandering off a straight burn path. This wasn’t the firmest ash in the world and had some minor flaking. The ash itself had a silver-gray color. As for the burn rate and burn temperature, both maintained ideal levels. 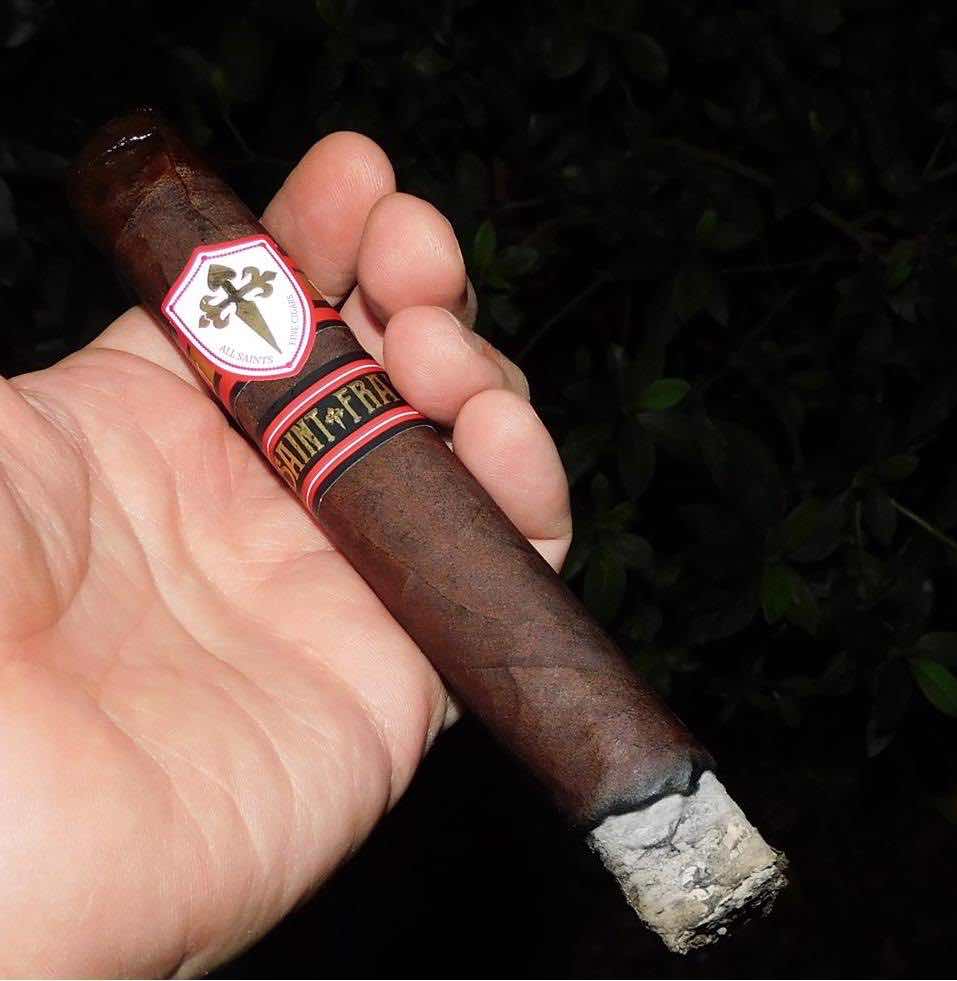 Burn of the All Saints St. Francis Oscuro Toro

For the most part, the St. Francis Oscuro Toro delivered a medium-strength, medium-bodied cigar from start to finish. There wasn’t much variance in the intensity levels. At the same time, both the strength and body balanced each other nicely and neither attribute overshadowed the other.

If you are looking for a cigar with classic black coffee flavors that comes from the natural tobacco leaves (ie. no flavoring or infusion), the All Saints St. Francis Oscuro Toro is the cigar for you. It’s going to be dominated by this coffee flavor from pre-light to nub. Also, there are enough complementary flavors to keep this cigar interesting from start to finish. This cigar could have scored better with the burn, but there were enough pluses to outweigh any minuses here. Micky Pegg and All Saints Cigars have a winner here, and it’s another excellent cigar that has come out of TAVICUSA the past couple of years. It’s a cigar that I would recommend to any cigar enthusiast. It’s a cigar I would smoke again and buy multiples of. At 90 points, it reaches the threshold for the Cigar Coop Standard of Excellence.