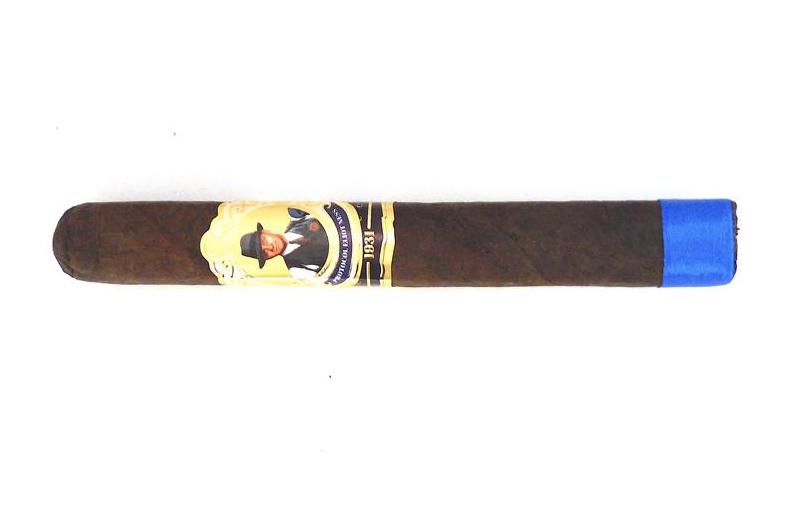 In 2019 Protocol Cigars would release a two-blend cigar release known as Protocol Sir Robert Peel. Protocol Sir Robert Peel would mark a major change in terms of a cigar being released as the line was intended to be a more premium offering in the portfolio. This would be reflected in both the blends and the corresponding packaging. Sir Robert Peel kept to the company’s theme of law enforcement in that Robert Peel is considered to be the father of the modern-day police force. It was in 1829 when Peel established the London Metropolitan Police Force.  The cigar proved to be a successful release for Protocol Cigars. As a result, the company decided to do additional releases with a similar theme under the moniker the “Lawman Series.”  The second release would also be a two-blend series in the form of a natural and maduro known as the Protocol Eliot Ness. Today we take a look at the Protocol Eliot Ness Maduro.

Eliot Ness pays homage to the American Prohibition agent, famous for his efforts to bring down Al Capone. It was originally planned for a late 2020 release, however, due to the supply chain delays as a result of the COVID-19 pandemic, it was released in early 2021. Most recently a third installment, the Protocol Bass Reeves, was launched at the PCA Trade Show. Reeves was one of the first African-American U.S. Marshalls. 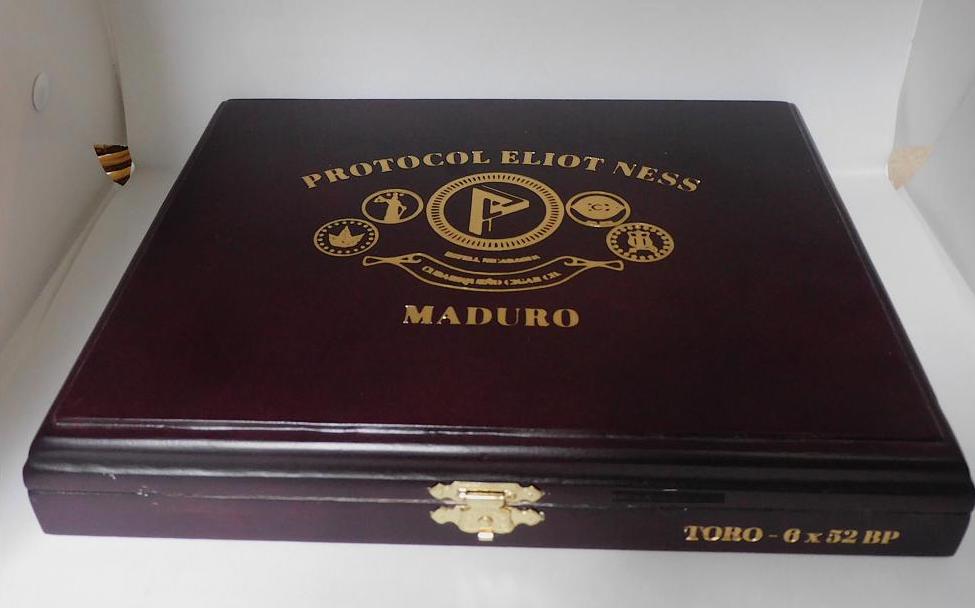 Below is a list of the three Lawman Series installments to date. All of the installments are available in both Natural and Maduro blends. All keep to the more premium packaging theme introduced with Sir Robert Peel.

Without further ado, let’s break down the Protocol Eliot Ness Maduro and see what this cigar brings to the table.

There are a couple of firsts for Protocol Cigars when it comes to the Protocol Eliot Ness Maduro. First up, the Eliot Ness Maduro (along with the Natural) is the first Protocol Cigar to be produced out of AJ Fernandez’s San Lotano factory in Ocotal. San Lotano is a factory that Espinosa Cigars uses in addition to its own La Zona factory. Over the years, Protocol has built a strong relationship with Espinosa and La Zona, so working with this factory isn’t a total surprise.

Both the Protocol Eliot Ness Maduro and Natural offerings were launched in one size – a 6 x 52 Box Pressed Toro. Each is packaged in elegant ten-count boxes. 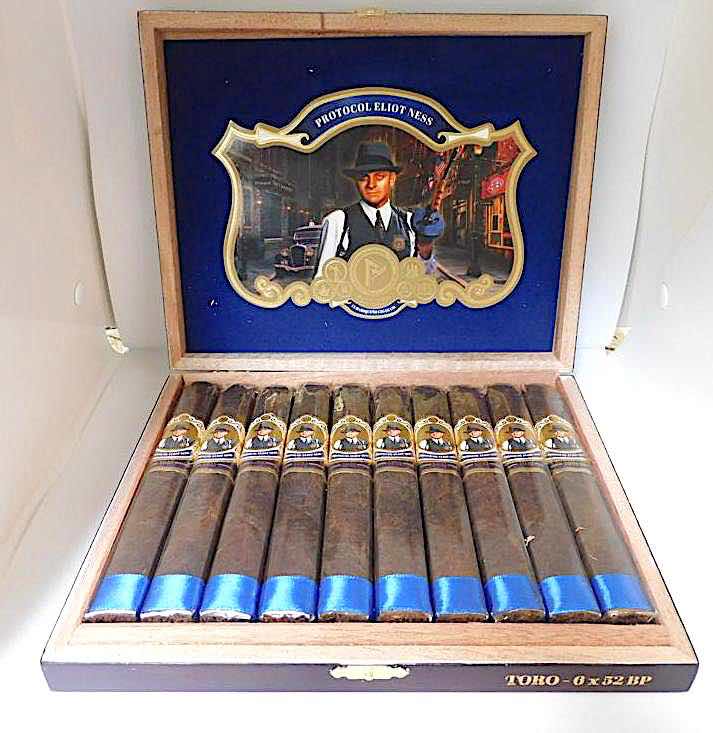 The Nicaraguan Broadleaf wrapper of the Protocol Eliot Ness Maduro has a cocoa bar look to it. There wasn’t much in the way of oil and there was a slight amount of mottling on the surface. The surface of the cigar was relatively smooth. Any visible wrapper seams and veins were on the thin side. The cigar itself had a square press to it. 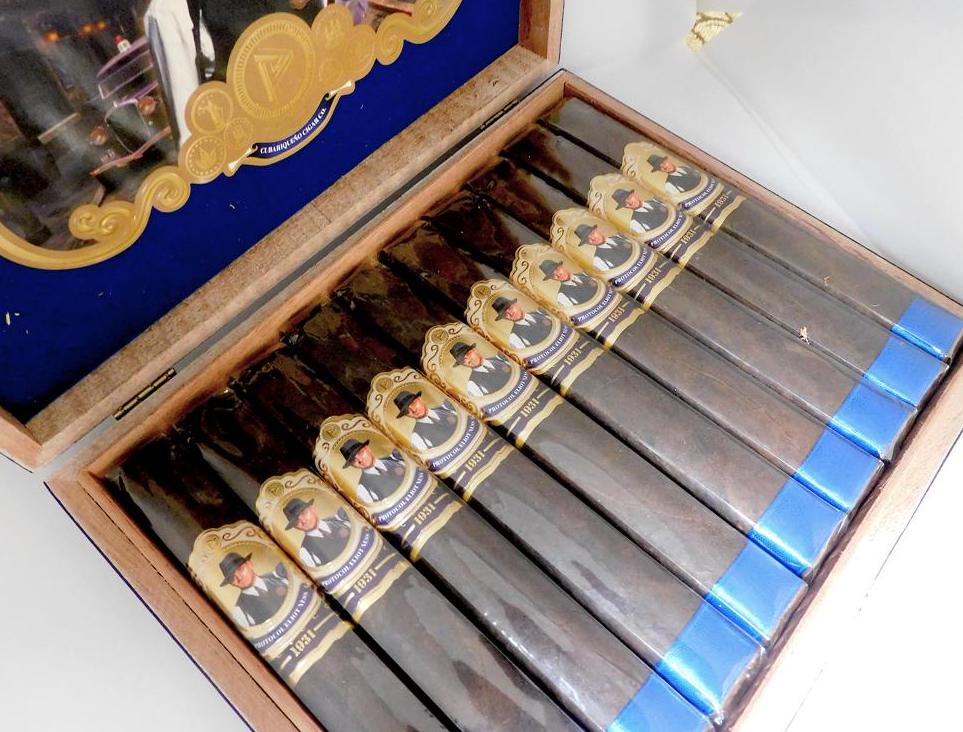 Close up of the Protocol Eliot Ness Maduro

There are two bands on the Eliot Ness Maduro. The primary band has a gold, indigo, and white color scheme. On the center of the band is a portrait of Eliot Ness on a gold background. Above the picture is a gold Protocol “P” on a gold circular field. Just under the picture is an indigo ribbon-like design with the text “PROTOCOL ELIOT NESS” in white font. Surrounding the portrait is a shield and a series of gold medallions. There are images on each of the gold medallions that have significance to Protocol Cigars and law enforcement in general. Co-owner Juan Cancel has referred to these as “Easter eggs.” To the left of the portrait is the text “ESTELI NICARAGUA” in white font on a maroon background while to the right is the text “LAWMAN SERIES – also in white font on an indigo background.

The primary band rests over a  secondary band. This band is indigo in color with some gold-colored “C”s arranged in a wallpaper-like fashion. The lower part of the band has the text “1931” (the year Eliot Ness had Al Capone indicted) in gold font surrounded by a gold pinstripe. The lower part of the band has a gold trim with a slightly irregular edge. A blue ribbon surrounds the footer of the cigar.

The Protocol Eliot Ness kicked off with more notes of coffee, dried fruit, and some earth. The fruit and coffee notes moved into the forefront early on. The earth notes settled into the background. As the cigar progressed through the first third, the coffee notes took a slight edge. Around this time some white pepper notes surfaced in the background. On the retro-hale, there were additional layers of wood, fruit sweetness, and a subtle white pepper note.

The second third of the Protocol Eliot Ness Maduro continued to see the coffee notes hold an edge in the forefront. There was a decrease in the fruit sweetness and an increase in the white pepper component. The earth notes pretty much remained grounded in the background.

During the final third, the spice notes approached the forefront, but didn’t quite become a primary note. The earth and dried fruit still played a complementary role in the background. This is the way the Protocol Eliot Ness Maduro came to a conclusion. The resulting nub was soft to the touch and cool in temperature.

Burn-wise, the Protocol Eliot Ness Maduro scored very well. While there was a slight amount of curvature on the burn line from time to time, the cigar maintained a straight burn path and didn’t require frequent touch-ups. The resulting ash was firm and light gray in color. The burn rate and burn temperature were both ideal. 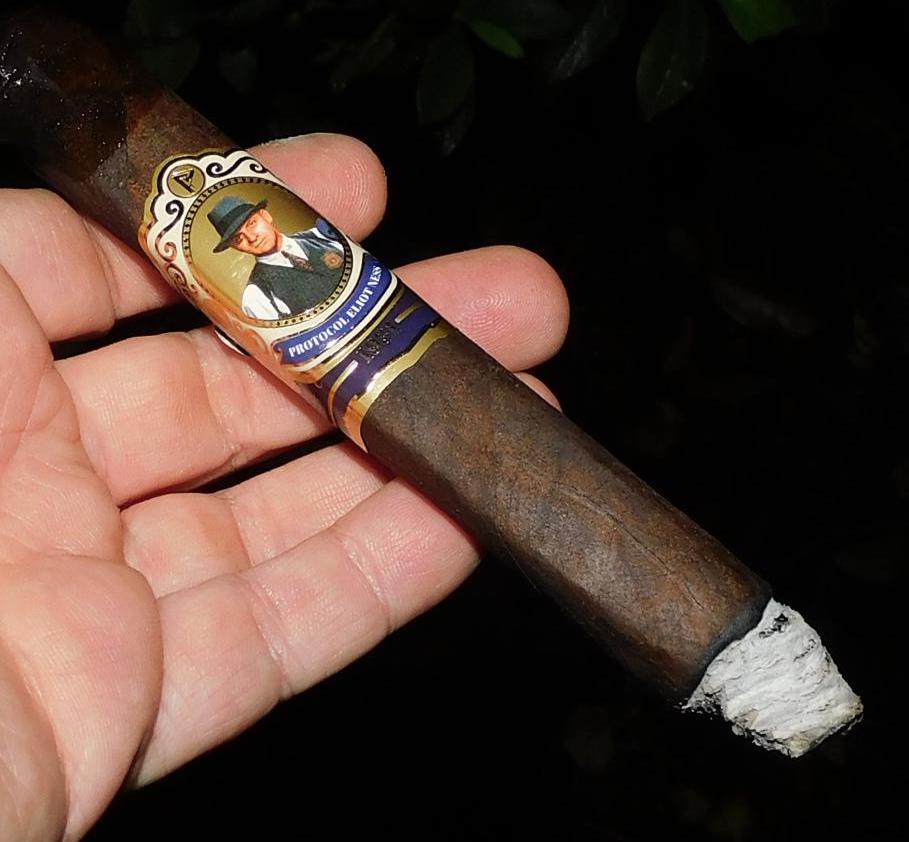 As for the draw of the Protocol Eliot Ness Maduro, it was open – and a little more open than I prefer. It wasn’t a bad draw by any means. Normally I like a little more resistance on the draw. The openness is something I find common on many box-pressed cigars.

The Protocol Eliot Ness Maduro is one of those cigars when you look at the wrapper and think it’s going to be a bold cigar. This is not the case, but that wasn’t surprising to me given there was no ligero in the filler. Strength-wise, this is a cigar that started in the mild to medium range before progressing to medium in the second half. Body-wise, the cigar was a solid medium from start to finish – with only a nominal increase in intensity along the way.

In terms of strength versus body, the body holds an easy edge from start to finish.

While I think it’s fair to say the Protocol Eliot Ness Maduro has a fairly linear and predictable flavor profile, I also think it’s fair to say that the flavors produced by this cigar are excellent. I liked the fact that Protocol Cigars delivered a more dialed-back maduro, and I think it’s a plus in terms of offering something different to their end consumers. While this isn’t something factored into the score, it must be noted that the packaging is beautiful and really complements the Nicaraguan Broadleaf wrapper nicely.

Speaking of Nicaraguan Broadleaf wrapper, it’s been a little hit or miss with me.  I think the use of this wrapper is still in its infancy and we will see better in terms of crops and fermentation in the future. At the same time, I think the team at Protocol along with blender Hector Alfonso did very well here. It’s still a cigar I would recommend to any cigar enthusiast, and it’s certainly one I would buy and smoke again.