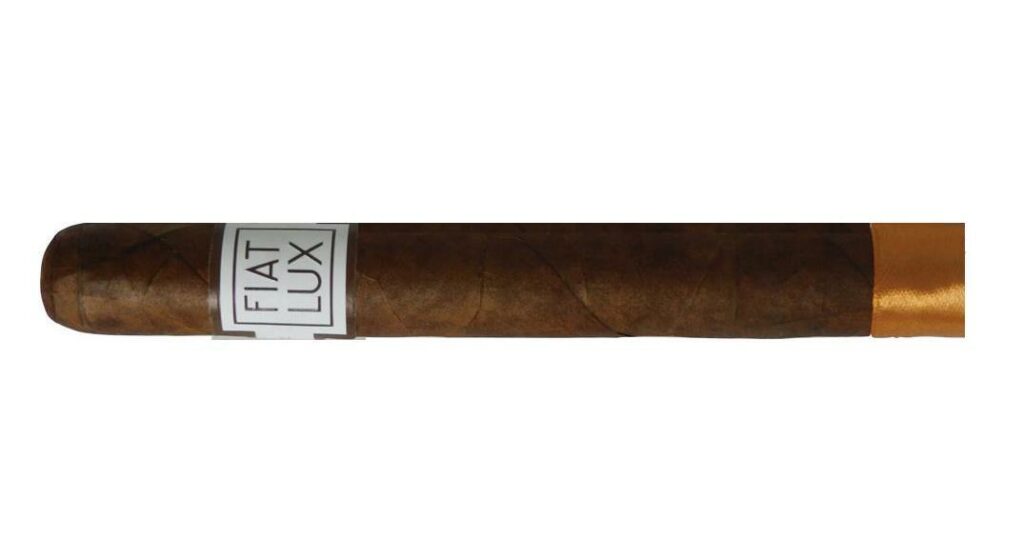 At the 2021 Premium Cigar Association (PCA) Trade Show, ACE Prime launched a new offering under its Luciano brand known as the Fiat Lux by Luciano. The Luciano brand is named for Luciano Meirelles, the owner and face of ACE Prime. Fiat Lux is a Latin expression for “let there be light” from the intellectual movement of the Enlightenment, and there is a story and concept behind the line. Today we take a closer look at the Fiat Lux in the Insight (Corona Gorda) size.

Fiat Lux, a latin expression well-known and often used during the intellectual movement of the Enlightenment, represents the search for knowledge and for meaning. It also happens to be the namesake for the new cigar in the Luciano line, by Ace Prime. Fiat Lux itself is a blend that generates deliberation. The construction of the cigar provokes an inevitable exploration of flavors as it ignites the taste buds for the sake of discovery. Enlightenment is a natural, mindful consequence of its physical attributes.

When you first light a great cigar, a space of expectation is created, where the opportunity for discovery presents itself. You taste a great blend, and you will be enlightened, both by delving into the complexity of flavors and with the possibility of introspection. It was with this sensorial and mindful journey in mind that the idea of Fiat Lux emerged, as a new blend that procures to express the birth of knowledge, to embody the consequence of its meaning: Let there be light. 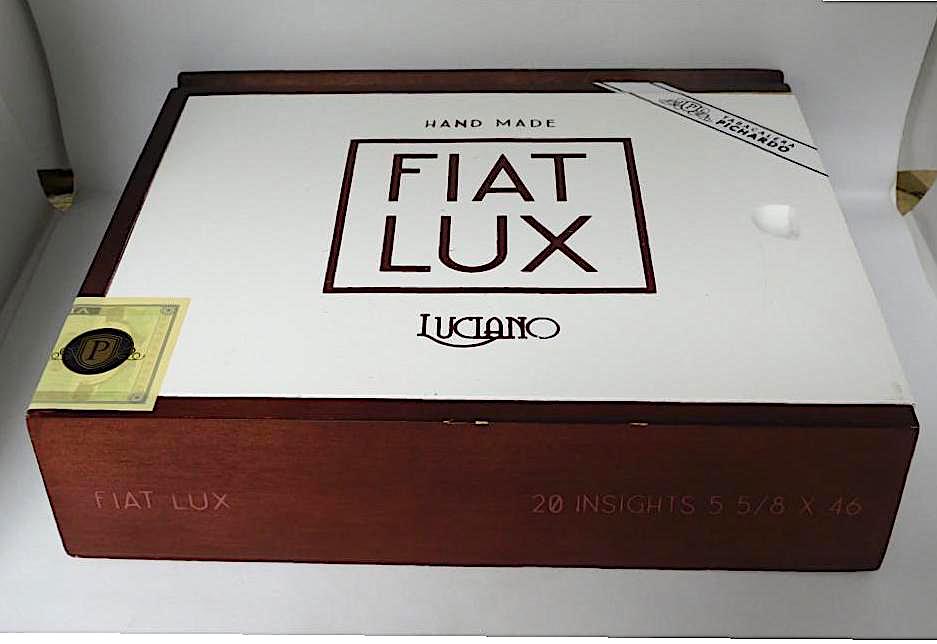 Closed box of the Fiat Lux by Luciano Insight

ACE Prime is a part of a strategic partnership with Crowned Heads. As part of that partnership, Crowned Heads is handling distribution. At the same time Tabacalera Pichardo, the factory that Meirelles co-owns, is being used to produce several Crowned Heads lines, one of which is Fiat Lux. In a way, Fiat Lux is a line that truly reflects why these two companies have excellent synergy. Crowned Heads has been long known for having a story or theme behind its cigars, and this reinforces that ACE Prime can do the same thing – thus showing one way these companies are a strong fit.

Without further ado, let’s break down the Fiat Lux by Luciano Insight and see what this cigar brings to the table.

Fiat Lux by Luciano consists of a high priming Ecuadorian Sumatra wrapper. Sumatra is a wrapper that has been seen across the Luciano, Pichardo, and MxS brands and across the ACE Prime portfolio. The remainder of the Fiat Lux blend consists of all Nicaraguan tobaccos. As mentioned, production is handled out of the Tabacalera Pichardo factory. 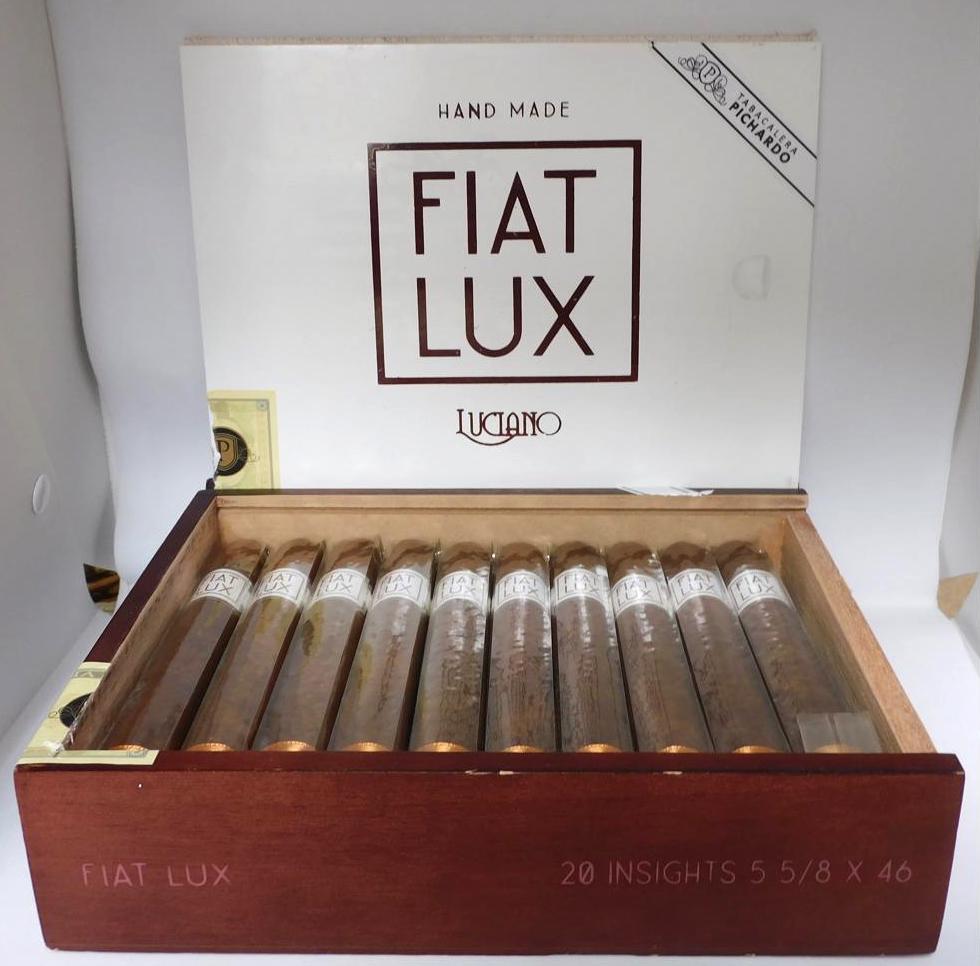 Open box of the Fiat Lux by Luciano Insight

The Ecuadorian Sumatra wrapper of the Fiat Lux by Luciano Insight had a medium brown color with a light sheen of oil on it. This was a relatively smooth wrapper. There were some visible veins on the surface. In addition, there were some thin visible wrapper seams. 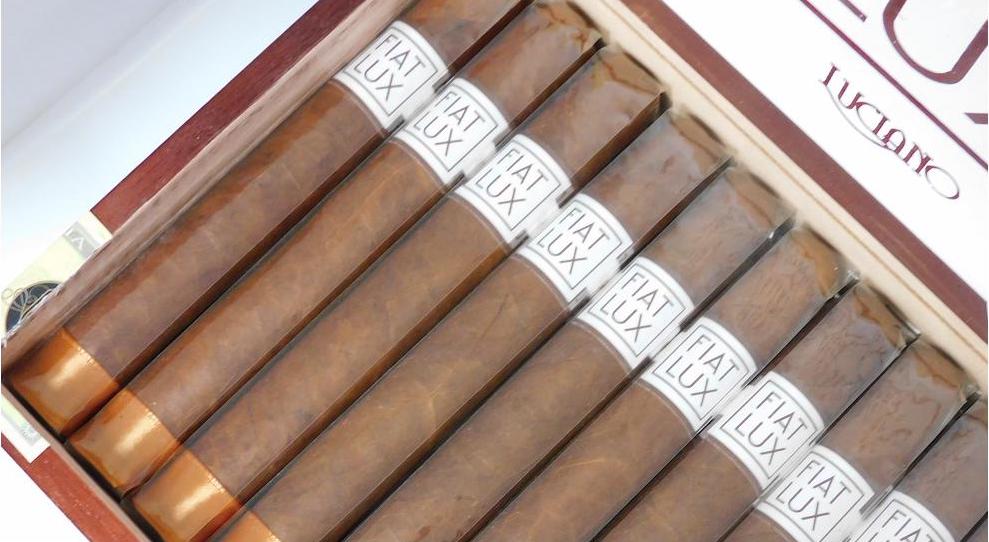 Close Up of the Fiat Lux by Luciano Insight

A straight cut was used to remove the cap of the Fiat Lux by Luciano Insight. Once the cap was removed it was on to the pre-light draw. The cold draw delivered notes of natural tobacco, wood, and a slight amount of pepper that tingled the tongue. This was a straightforward and satisfying pre-light draw experience. At this point, it was time to remove the ribbon of the Fiat Lux by Luciano Insight and see what the smoking phase would have in store.

During the second third of the Fiat Lux by Luciano Insight, the natural tobacco notes remained primary, but started to shed some of the sweetness and savoriness from the first third. The earth and black pepper notes increased in intensity. By the second third, the earth notes joined the natural tobacco in the forefront.  While the pepper, cedar, and baker’s spice were secondary notes, they were not distant yet not overpowering.

There wasn’t much change in the final third. The earth and natural tobacco remained primary, but the sweetness and savoriness from the natural tobacco were not much of a factor. Meanwhile, the pepper, cedar, and baker’s spice remained at the same level as the final third. This is the way the Fiat Lux by Luciano Insight came to a close. The resulting nub was slightly soft to the touch and cool in temperature.

The construction of the Fiat Lux by Luciano Insight was excellent and this was reflected in the burn. The burn maintained a straight burn path requiring minimal touch-ups. There was a slight bit of jaggedness, but this didn’t really warrant anything in the form of additional touch-ups. The resulting ash was near silver in color. This was tight and firm. Then rate and burn temperature were ideal. 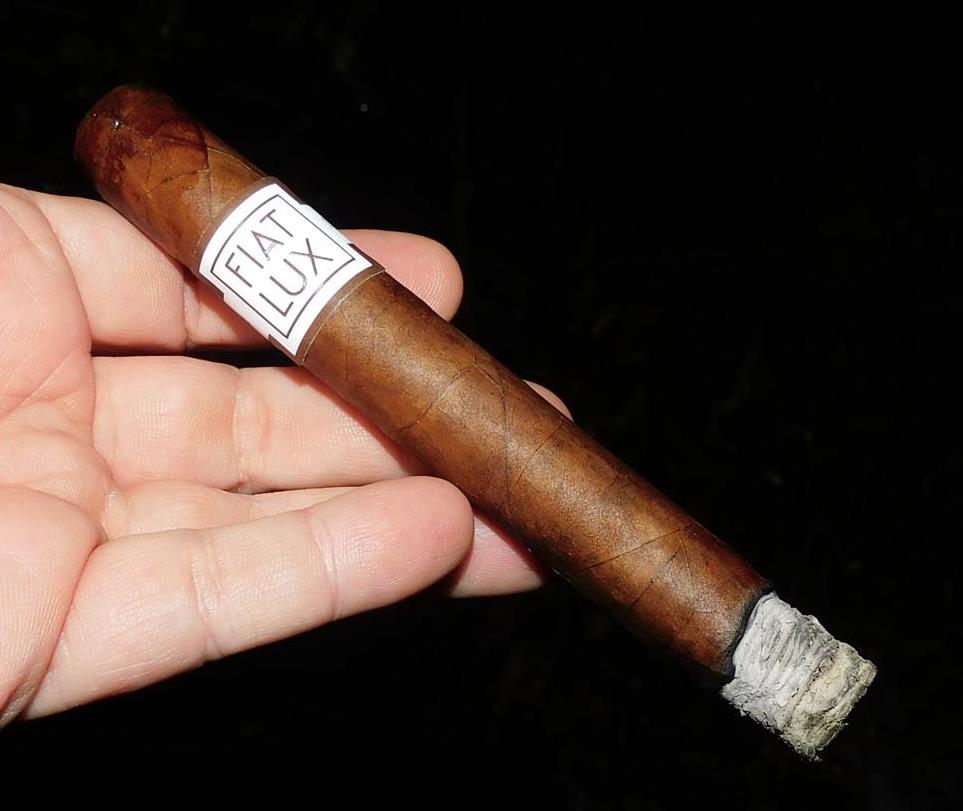 Burn of the ACE Prime Fiat Lux by Luciano Insight

The draw to the Fiat Lux by Luciano Insight performed stellarly. This was an ash that had a sight amount of resistance – making for an ideal draw. At the same time, this was a low-maintenance cigar to derive flavor from.

The Fiat Lux by Luciano Insight started out as medium strength, medium-bodied cigar – and essentially maintained that level from start to finish. Along the way, there wasn’t much change in the intensity levels of both attributes. In terms of strength versus body, the body maintained a slight edge over the strength throughout the smoking experience.

Sometimes when I hear there’s a high-priming wrapper, I get a little nervous. I worry that the cigar won’t burn well and it will deliver too much strength and/or overpower with spice. This was not the case with the Fiat Lux by Luciano Insight. This delivered a well-balanced smoking experience from start to finish. On top of it, I loved how clean a finish this cigar delivered. This is a cigar that responded very well to short-term aging (about four months), and I’m curious how it will respond with further aging. At $8.75, the price point is attractive and the cigar pays off in dividends. This is a cigar I could recommend to any cigar enthusiast. As for myself, it’s a cigar I would smoke again and buy multiples for the humidor. Coming in at 90 points, this cigar earns a Cigar Coop Standard of Excellence designation.