Agile Cigar Reviews are cigar assessments where we use a lightweight, shorter format. These will never take the place of our comprehensive reviews. They are only primarily used on blends we have previously assessed. This might be a blend we are re-scoring or in some cases giving a score for the first time. It might be a blend we are looking at in a different size. Today we look at the Undercrown 10 Robusto by Drew Estate This is a cigar blend previously assessed back in October 2021 in the Toro size. 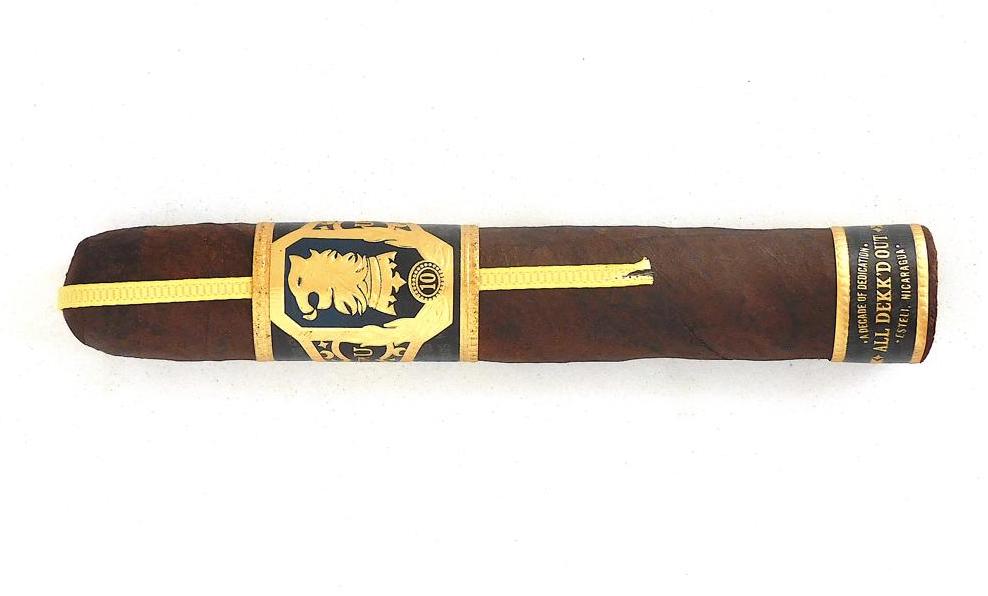 The Undecrown 10 is a brand that would celebrate ten years of Undercrown for Drew Estate. Undercrown 10 made its debut in 2021 – about a decade after Drew Estate introduced the first Undercrown cigar. Today we take a look at the Robusto-sized offering from the Undercrown 10 line.

For Drew Estate, this was an important step to its evolution in the traditional premium handmade cigars space. A few years earlier, in 2008, Drew Estate made a significant move into that space with Liga Privada, but the blend was always intended to be somewhat of a limited production offering. This is where Undercrown came in. Drew Estate needed an offering that was not as constrained as Liga Privada. In any factory, it is common for rollers to smoke the cigar they are making. With Drew Estate’s popular Liga Privada, because there was high demand with limited tobacco, it was not possible for the rollers to smoke that cigar. Therefore, the rollers came up with a variation of the Liga Privada blend which would be dubbed Undercrown (now Undercrown Maduro). This basically involved using alternate primings from the same tobaccos that were acquired and used in the Liga Privada blend. The Undercrown Maduro was later released to the market. Eventually, it developed into a full brand that expanded over the past decade with Undercrown Shade and Undercrown Sun Grown. Undercrown would also go on to become their impact brand of the decade.

Like the original Undercrown Maduro, the Undercrown 10 utilizes a Mexican San Andres wrapper. According to Drew Estate, the Undercrown 10’s Mexican wrapper Is from a higher priming. The binder is a Connecticut Broadleaf and the fillers are all Nicaraguan. The Robusto format is a classic 5 x 50 size.

The Undercrown 10 Robusto kicked off with notes of coffee, cocoa, baker’s spice, red licorice, red pepper, and cream. Early on the coffee and cocoa notes took over as the primary noes, and later in the first third, the coffee notes took over as the sole primary note. The cocoa settled with the other notes present. There was a gradual increase in the red pepper notes on the tongue and retro-hale, that would slowly shift to more of a black pepper varietal. The second third saw the cocoa, cream, and licorice notes diminish significantly – opening the door for the pepper to inch toward the forefront. The final third saw the coffee remain primary – closely followed by the pepper, cocoa, and baker’s spice notes. The cigar finished up with a cool, soft nub.

The flavors of the Undercrown 10 Robusto were medium-bodied and countered by medium strength. In the final third, both the strength and body increased in intensity to medium to full. Both the strength and body balanced each other nicely. The Undercrown 10 Robusto had an excellent draw. As for the burn, it did require some touch-ups to maintain a straight burn path and straight burn line.

Last year, the Undercrown 10 Toro landed a spot on the Cigar Coop Countdown. While flavor-wise, the Robusto was in the wheelhouse of Toro, the flavors seemed slightly richer. Like the Toro, the Robusto lands a 91-point score. A slight increase in score for flavor was offset by a burn that while still very good, did require a little more TLC. In the end, the 91 points is enough to exceed the threshold for the Cigar Coop Standard of Excellence. The Undercrown 10 Robusto is a size I’d recommend to any cigar enthusiast. As for myself, it’s one I would smoke again and it’s one that garners box-worthy consideration.