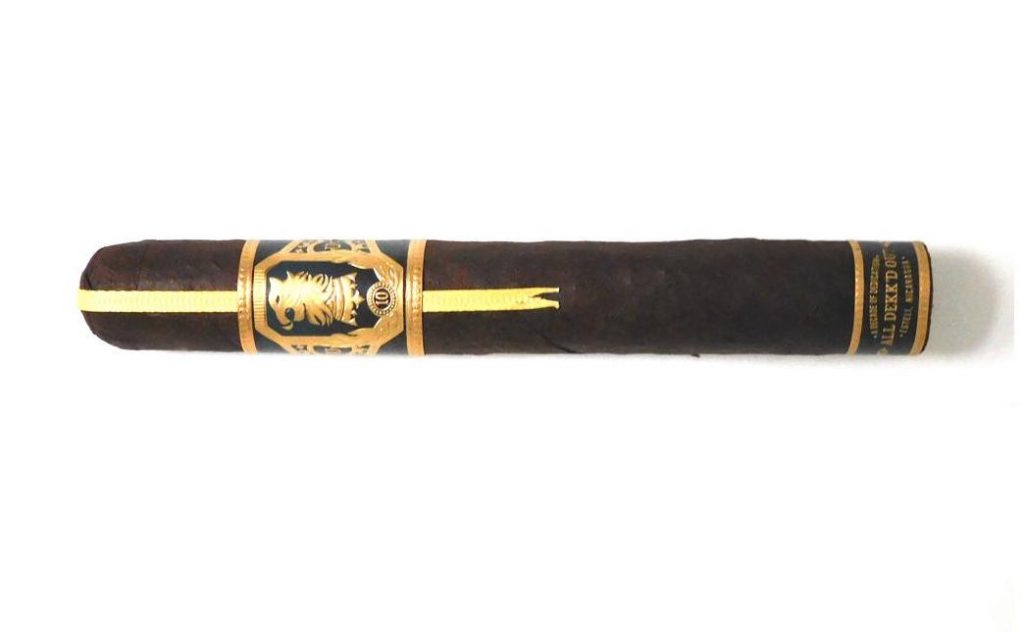 Undercrown is a brand that has been important to Drew Estate’s evolution of moving into the premium handmade cigar space. In 2008, Drew Estate made a significant move into that space with Liga Privada, but the blend was always intended to be somewhat of a limited production offering. This is where Undercrown came in. Drew Estate needed an offering that was not as constrained as Liga Privada. It turns out a scenario within Drew Estate actually would help solve this problem.

In any factory, it is common for rollers to smoke the cigar they are making. With Drew Estate’s popular Liga Privada, because there was high demand with limited tobacco, it was not possible for the rollers to smoke that cigar. Therefore, the rollers came up with a variation of the Liga Privada blend which would be dubbed Undercrown (now Undercrown Maduro). This basically involved using alternate primings from the same tobaccos that were acquired and used in the Liga Privada blend. Undercrown expanded over the past decade with Undercrown Shade and Undercrown Sun Grown – keeping to the mantra of keeping the factory workers engaged with the development of the project with Master Blender Willy Herrera.

The importance of the success of Undercrown should not be minimized. The original Undercrown Maduro topped the Cigar Coop Decade Impact Brand list (2010-19) for that reason.

Undercrown 10 is positioned to be the most premium offering in the Undercrown brand to date – from the tobaccos incorporated to the unique packaging of the cigars. Without further ado, let’s break down the Undercrown 10 Toro and see what this cigar brings to the table.

Undercrown 10 had a soft launch as an unbanded “Mystery Cigar” included in a Freestyle Live Limited Edition Event Kit that was made available to consumers prior to the Freestyle Live Broadcast. On the broadcast, it was revealed that the Mystery Cigar was the new Undercrown 10. Viewers were curious about what the wrapper of this cigar was made from. It turned out that Drew Estate went to a San Andres leaf.

While the Undercrown Maduro also uses a San Andres wrapper, the San Andres wrapper for the Undercrown 10 is a higher grade and priming. The remainder of the blend incorporates “the very finest Broadleaf binder from the Connecticut River Valley, and a tripa blend of select and rare Nicaraguan tobaccos.” Production is handled at La Gran Fabrica Drew Estate in Estelí, Nicaragua. 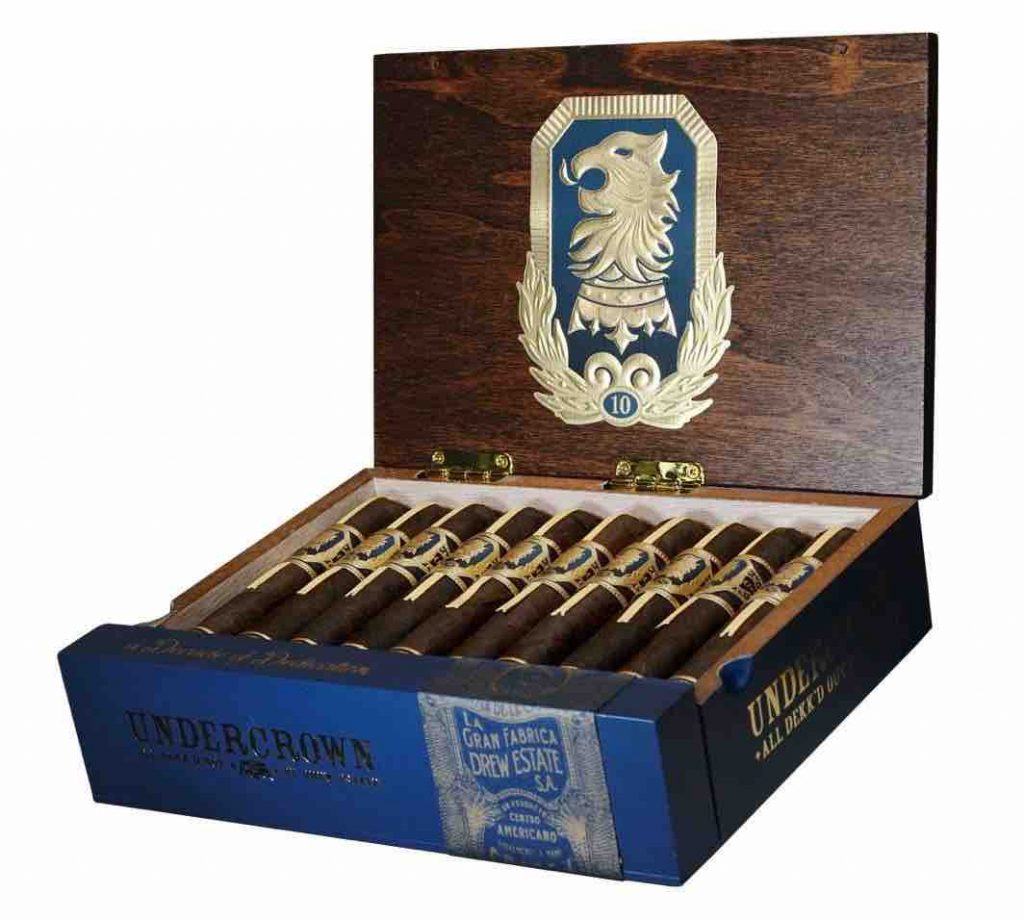 The second offering will be an event-only cigar known as the  Undercrown 10 Tuani Belicoso (6 x 52). This will be exclusively available in a special two-count presentation coffin/box at Drew Estate events hosted by Factory Spokesman Pedro Gomez.

The Mexican San Andres wrapper of the Undercrown 10 Toro has an elegance to it while maintaining some of the ruggedness the San Andres leaf is associated with. It’s a dark espresso-bean colored wrapper. There is a light sheen of oil on the band. The wrapper has some thin visible veins and some visible wrapper seams.

There are three bands on the Undercrown 10. The first is a double-layered band on the upper portion of the cigar. This features a variation of the traditional Undercrown Maduro band. The primary band is the same seen on the Undercrown Maduro line. This band features a blue background and gold font. The center of the band features a gold Liga Privada-style lion on a gold upside-down crown. To the left is a mirror reflection of the text Undercrown. To the right is the text “Undercrown.” To the far right, fastening the back of the band is the Drew Estate logo in gold font on a blue background. The lower part of the band features a gold “10” on a blue circular field surrounded with gold trim. The remainder of this band has more regal looking gold embellishments. The back of the band has the text “gracias” in gray font. 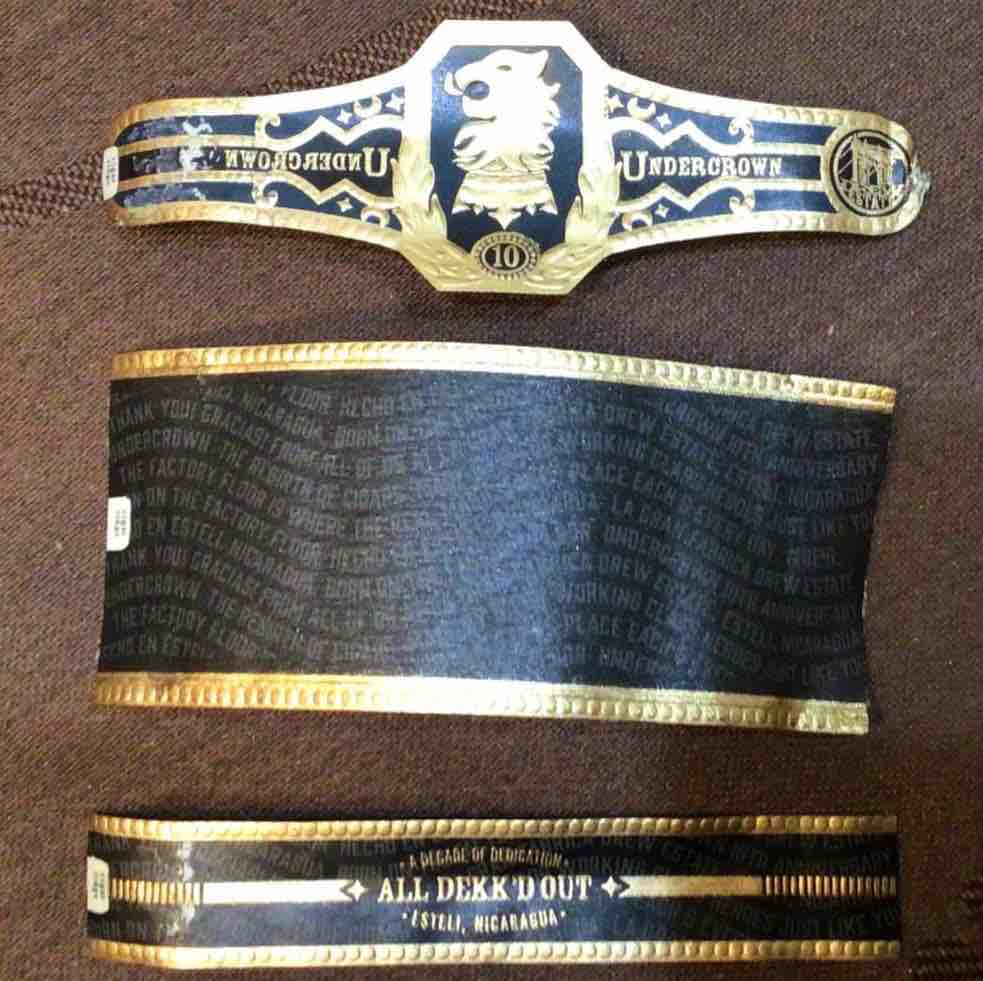 Bands of the Undercrown 10

The second band is what the Undercrown 10 band described above sits on top of. It is a dark colored band with elegant gold trim. There is a lot of text in a light gray wavy font that describes the roots of the Undercrown brand. The back of the band has the following text:

THANK YOU FOR SHARING OUR STORY Created by our torcedores who had to reduce their consumption of Liga Privadas, they came together and created a blend for their own daily enjoyment.  By selecting several vintages and priming, it was no mere replacement and quickly became their favorite smoke.  Our people, the common folk of Nicaragua, are the true living fabric and heart of our factory in Esteli, “La Gran Fabrica Drew Estate.”  The production floor, where they demonstrate their craft, is the crossroads between art & passion – and where the real magic takes place every single day. Thank you for making Undercrown your favorite cigar in the world for the past 10 years, it means the world to us .. a Decade of Dedication. 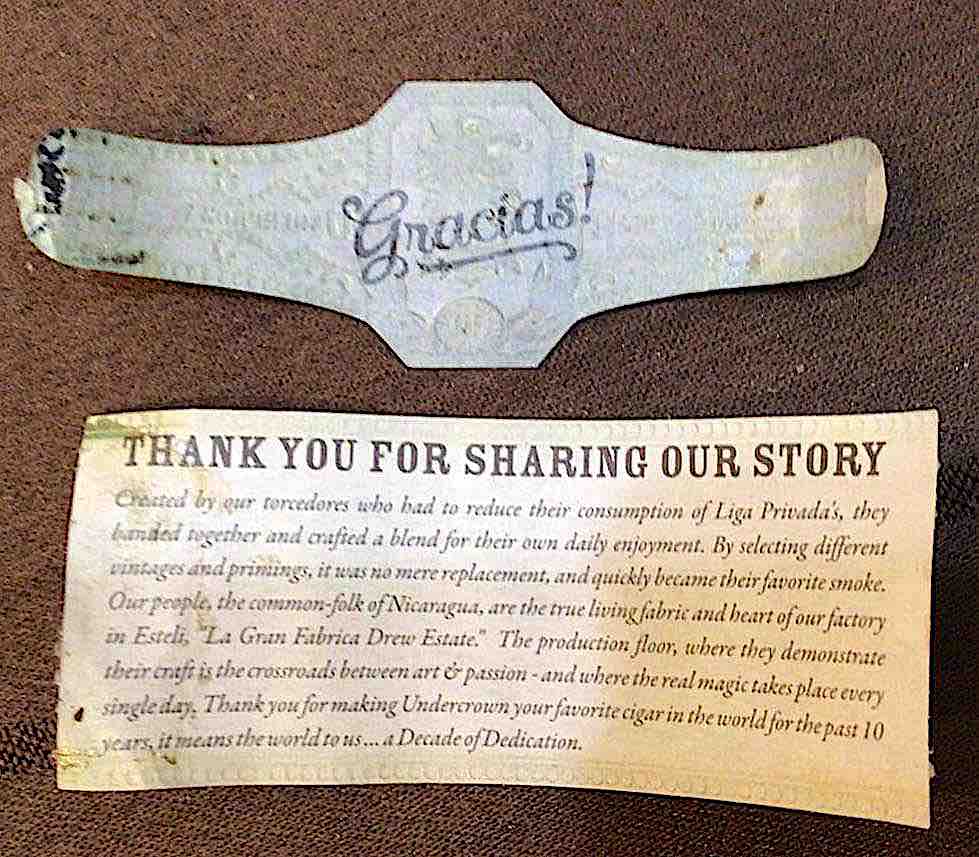 Back of the Undercrown 10 bands

The third band rests on the footer. It matches the Undercrown 10 band. It says “ALL DEKK’D OUT” (a slogan for Undercrown 10) in gold font. There are also gold embellishments and gold trim.

Perhaps the most unique packaging feature is a simple thin gold ribbon that is draped over the cap of the cigar and rests under the front and back of the band. It enhances the slogan “All Dekked Out” for the packaging. 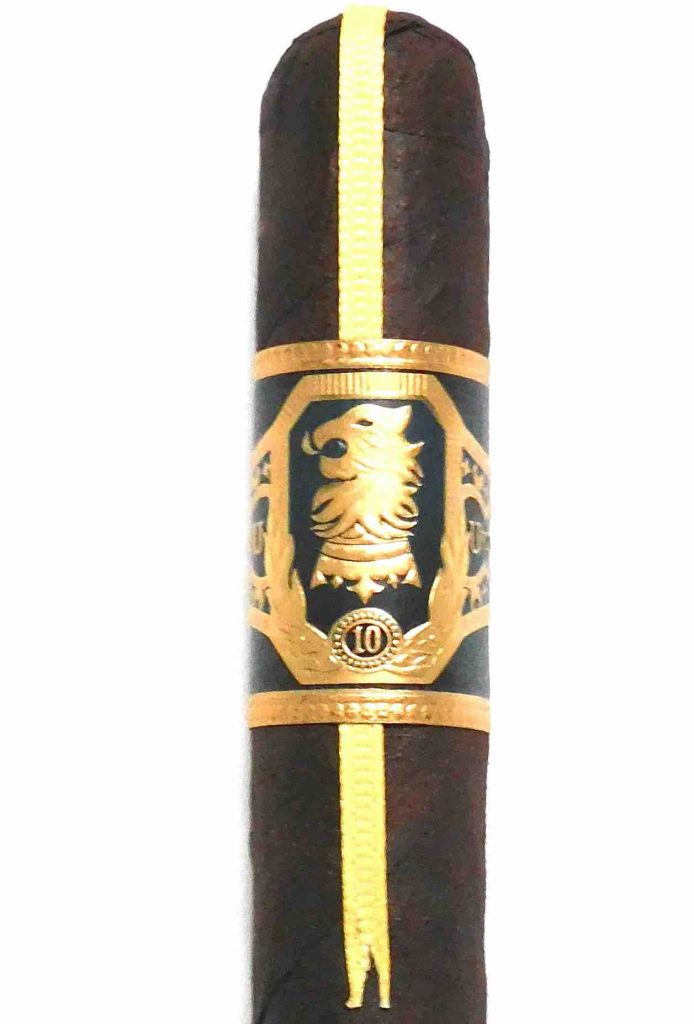 View of the Undercrown 10 Ribbon

Prior to starting the pre-light draw experience of the Undercrown 10 Toro, the ribbon draping the cap was removed with ease. From that point, I moved to placing a straight cut to remove the cap and commencing the pre-light draw. The cold draw delivered a mix of black coffee and cocoa powder with a slight hint of spice. This was simple, but enjoyable pre-light draw experience. At this point, it was time to remove the footer band, toast up the Undercrown 10 Toro and move on to the smoking phase.

The Undercrown 10 Toro started off with notes of cocoa powder and black coffee. This was quickly joined by notes of licorice, red pepper, and baker’s spice. The cocoa and coffee notes moved to the forefront. Sometimes these notes fuse into what I term “mocha”, but these were separate and distinct. There was an underlying creamy texture to these notes. The licorice, baker’s spice, and red pepper rounded out the flavor profile from the background. On the retro-hale was an additional layer of licorice and red pepper.

By the second third of the Undercrown 10 Toro, the black coffee notes took over as the primary note. There was a definite richness to these coffee notes. The red pepper and baker’s spice increased in intensity during this stage. The cocoa and licorice notes remained secondary and the creaminess subsided and dissipated. The retro-hale shifted to more of a black pepper note.

By the final third, the coffee notes remained primary, but now the baker’s spice and red pepper were also present in the forefront. There still were notes of cocoa and licorice present. This was the way the smoking experience of the Undercrown 10 Toro came to a close. The resulting nub was slightly soft to the touch and cool in temperature.

The Undercrown 10 Toro was a well-constructed cigar and this reflected in the scores of the burn and draw. The burn maintained a straight burn path and straight burn line requiring minimal touchups. The resulting ash was on the firm side with a light gray color. The burn rate and burn temperature were both ideal. 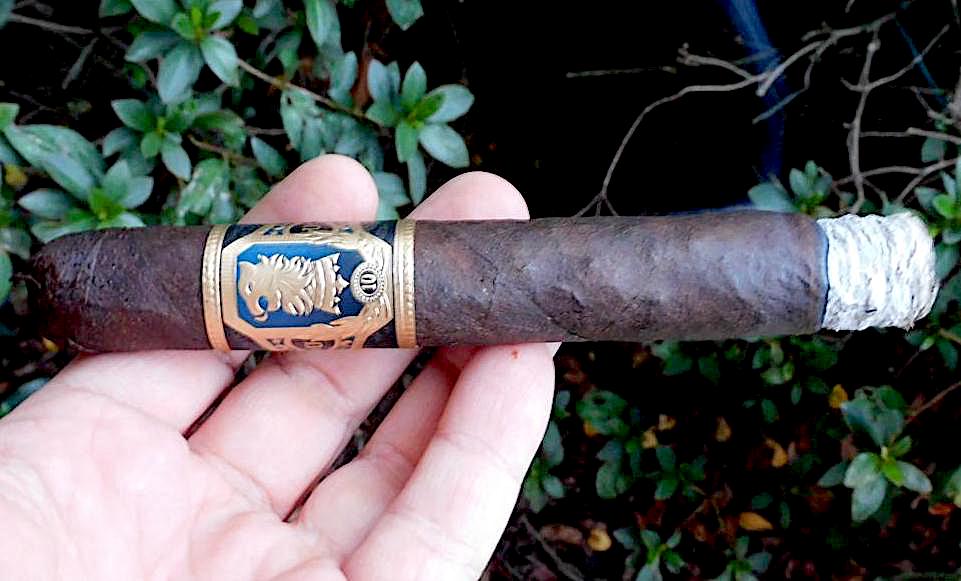 Burn of the Undercrown 10 Toro

The Undercrown 10 started out as a medium strength, medium-bodied smoke. Along the way, there was an increase in the intensity levels . By the final third, both attributes were in medium to full territory. Throughout the smoking experience, the body maintained a slight edge over the strength.

While packaging doesn’t account for the final score, I think Drew Estate did an amazing job at making these cigars “All Dekk’d Out.” The simple yellow ribbon on the cap was a really nice touch. As for the cigar, this was an impressive offering. It’s a cigar that has gotten better over time. The cigar was positioned as having a “Mexican Hot Chocolate” feel to it. While I didn’t quite get Mexican Hot Chocolate, the notes of coffee, cocoa, and spice were still quite present. The final third was definitely spicier and a notch down from the first two-thirds. Finally, this cigar is a different animal than the Undercrown Maduro. It’s richer and spicier. In the end, I would recommend this to a more experienced cigar enthusiast, but this could be a cigar to try for the novice looking for something “medium plus” and with some spice. As for myself, this is a cigar I would smoke again and it’s one that garners box-worthy consideration. At 91 points, this cigar exceeds the threshold of the Cigar Coop Standard of Excellence.