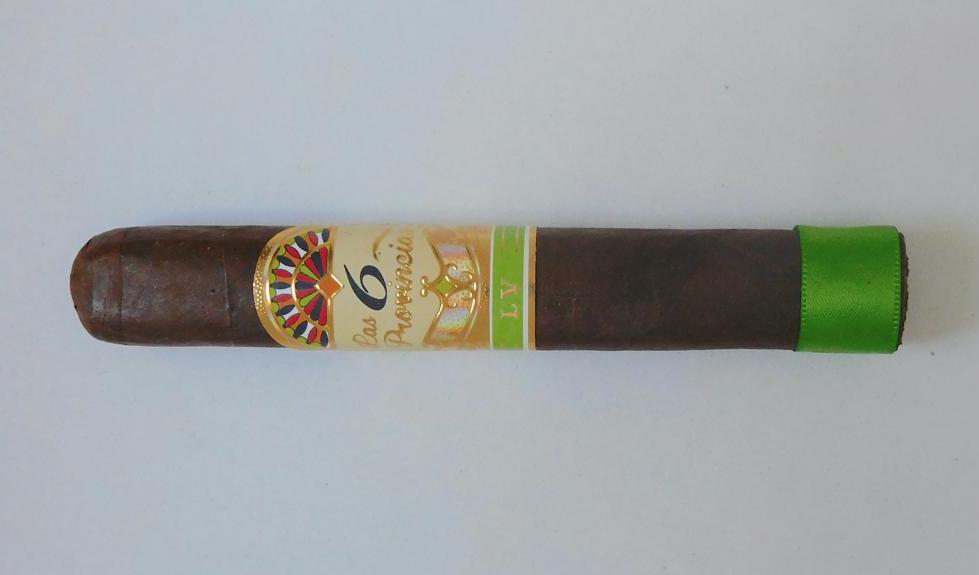 To date, we have seen three installments of the limited edition Las 6 Provincias series:

One thing that is a signature of the Las 6 Provincias series is the packaging and artwork. The LV release is no exception. The packaging features a ten-count curio display featuring original artwork from local Cuban artist Eden Gutierrez depicting scenes from Las Villas before the Communist Revolution. 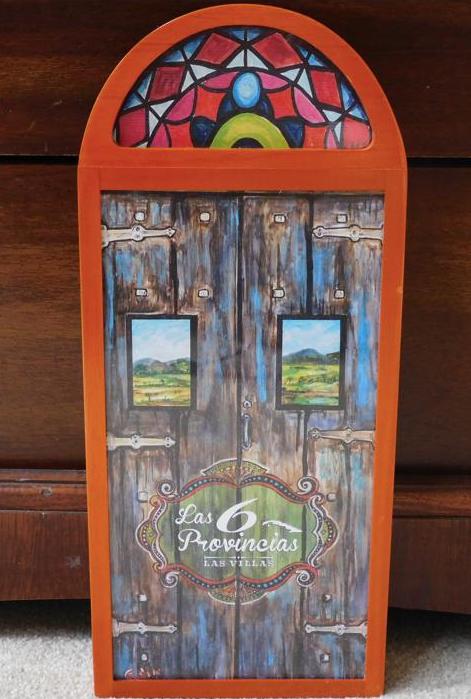 One thing that is different about the LV release compared to the previous two Las 6 Provincias releases is that each cigar is packaged in a coffin. The coffin packaging is something we really haven’t seen from Espinosa cigars. 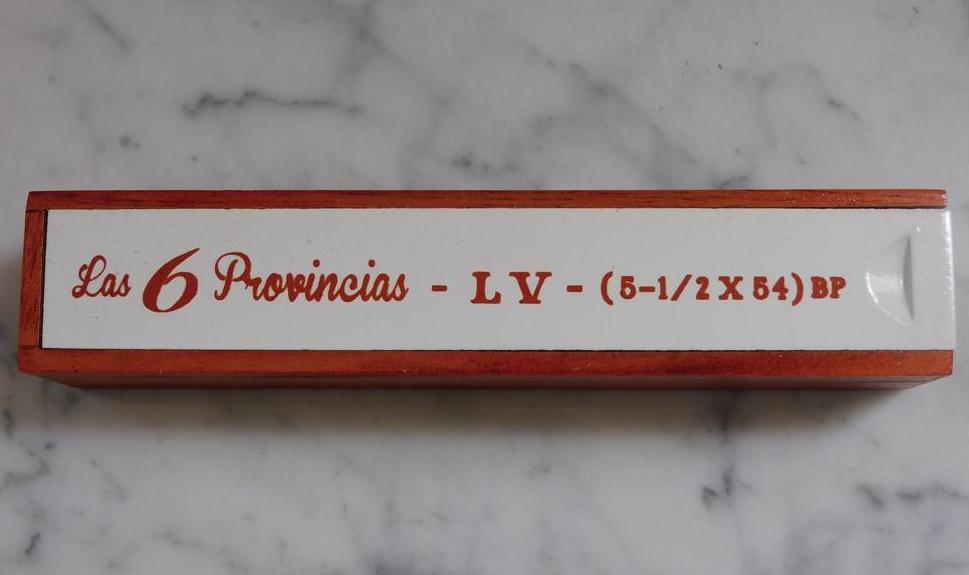 Without further ado, let’s break down the Las 6 Provincias LV and see what this cigar brings to the table.

The Las 6 Provincias LV is available in one size – a 5 1/2 x 54 Box Pressed Robusto Extra. As mentioned above, the cigars are packaged in ten-count curios with each cigar packaged in a coffin. Production numbers were not disclosed. 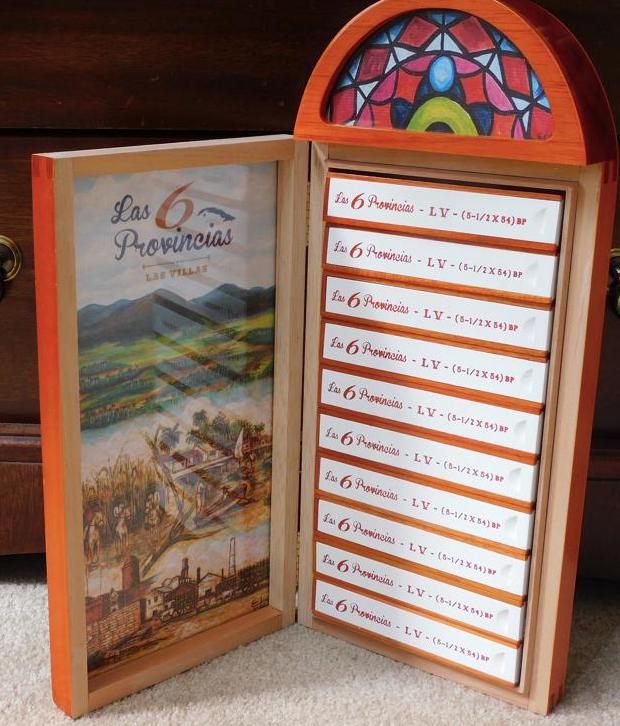 The Nicaraguan wrapper of the Las 6 Provincias LV had a darker shade of brown coloring. There was a light coating of oil on the wrapper. The surface of the wrapper had some thin visible veins and thin visible wrapper seams. The box-press was a soft Cuban-press style. 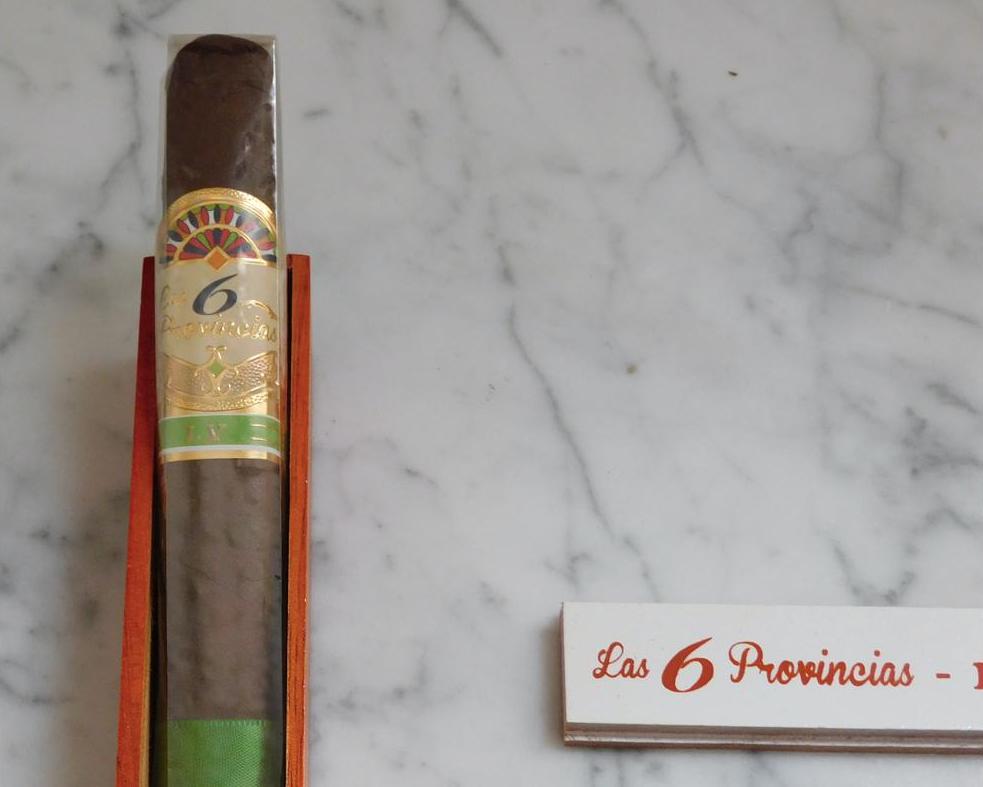 There are two bands on the Las 6 Provincias LV. It is similar to the band of the previous installments but the big difference is the added green color. The primary band has a pale yellow background with the text “Las 6 Provincias” on the front. The “6” is in blue while the remainder of the text is gold. Above the text are two concentric sunrise-like designs that are mostly red, blue, orange, green, and gold. There are green and gold adornments to the left and right. The left side of the band has the text “ESPINOSA” in small white font on a blue background. The right side of the band has the text “CIGARS” which is also in white font on a blue background. The far right contains a dark blue and white Espinosa La Zona circular logo.

Resting partially under the primary band is a secondary band. It mostly has a gold holographic foil background. The lower part of the band contains a thick green stripe surrounded by white pinstripes. On that band is the text “LV” in gold font. To the left and right of the text are two parallel horizontal gold pinstripes.

Finally, there is a green-colored ribbon surrounding the bottom of the cigar near the footer.

A straight cut was used to remove the cap of the Las 6 Provincias LV. Once the cap was removed, it was on to the pre-light draw experience. The cold draw delivered a simple combination of cocoa powder and cedar. Overall this was a satisfactory pre-light draw experience. At this point, it was time to remove the footer band of the Las 6 Provincias LV, toast up the cigar and move on to the smoking phase.

The Las 6 Provincias LV opened up with notes of cocoa, cherry and slight amounts of black pepper, earth, and metallic notes. Early on the cocoa notes moved into the forefront with the cherry, pepper, earth, and metallic notes settling in the background. The cherry was the most prominent of the secondary notes. There also was a slight savory component present in the background.

The second third of the Las 6 Provincias LV saw the earth notes increase in intensity and join the cocoa in the forefront. There also was a slight increase in the pepper notes while some of the cherry sweetness diminished slightly while the savory notes dissipated.

By the final third, the earth and cocoa notes remained grounded in the forefront. The earth notes seemed to have a slight edge here. The pepper and cherry notes were the most prominent secondary notes, and there were still touches of the metallic notes in the background. This is the way the Las 6 Provincias LV came to a close. The resulting nub was cool in temperature and slightly soft to the touch.

The burn of the Las 6 Provincias had a straight burn path and straight burn line, but it did require frequent touch-ups to keep it on track. The touch-ups that were made did do the trick. The resulting ash was firm with a salt and pepper color to it. As for the burn rate and burn temperature, both were ideal. 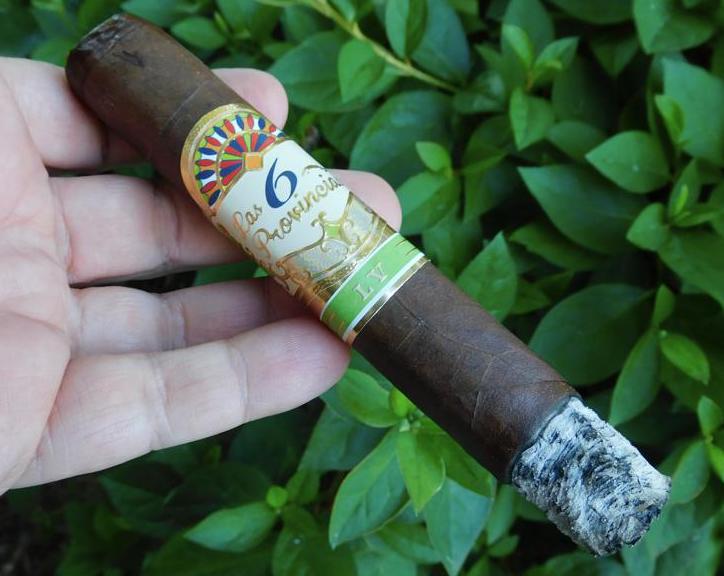 Burn of the Las 6 Provincias LV

The Las 6 Provincias LV had a draw that was on the open side. Normally I like a little more resistance on the draw – especially on a box press. While it wasn’t a loose draw, I did have to work this draw carefully in order to avoid the cigar overheating.

In terms of strength versus body, the body maintains an edge.

The impressive presentation of the Las 6 Provincias LV was backed by an excellent blend delivered by Hector Alfonso and his team. The most important attribute in how a blend delivers is flavor – and that’s exactly what this cigar will do. As far as complexity goes, the complexities in this cigar are more defined by the flavor nuances than the transitions. While the draw wasn’t bad, I’ve had better draws off an Espinosa cigar before. Still, the positives far outweigh this negative. Finally, this is the most expensive widespread release Espinosa has done – coming in at $22.00. While certainly a cigar that is not inexpensive, it is one that was enjoyable. It’s one I’d recommend to a more seasoned cigar enthusiast as this is on the bolder side. As for myself, this is a cigar I certainly would buy and smoke again. Coming in at 90 points, the Las 6 Provincias LV earns the Cigar Coop Standard of Excellence designation.