Agile Cigar Reviews are cigar assessments where we use a lightweight, shorter format. These will never take the place of our comprehensive reviews. They are only used on blends we have previously assessed. This might be a blend we are re-scoring or giving a score for the first time. It might be a blend we are looking at in a different size. Today we look at the Aganorsa Leaf Supreme Leaf 5 x 54 Robusto This is a cigar previously assessed in the core line back in March 2022 in the Torpedo size. 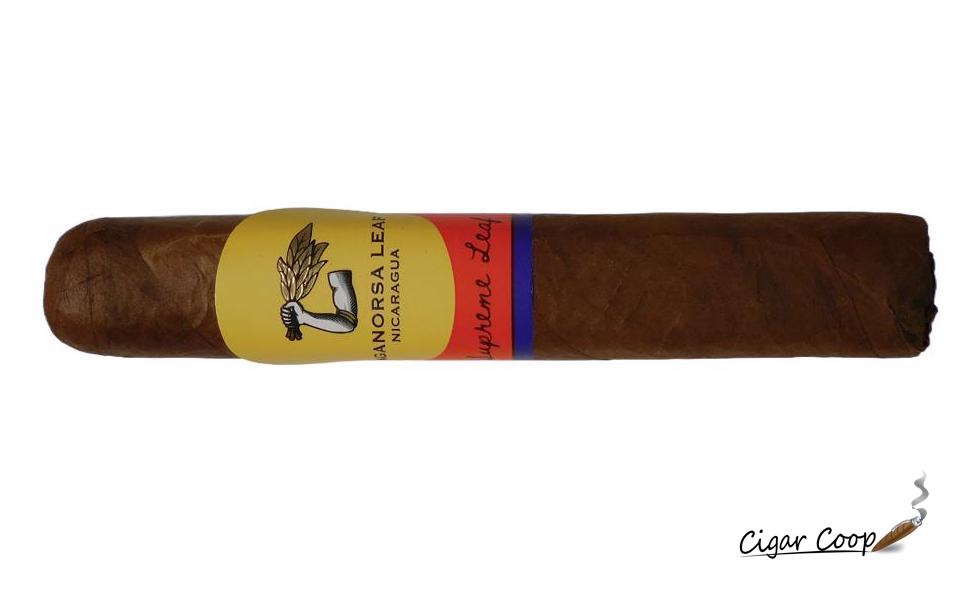 At the beginning of 2022, Aganorsa Leaf would release the fifth batch of its Aganorsa Leaf Supreme Leaf series. Over the years Aganorsa Leaf (previously known as Casa Fernandez Cigars) has garnered a reputation for the ”leaf” (a.k.a. tobacco) it grows being some of the best produced in the world. The Aganorsa Leaf Supreme Leaf pays homage to that reputation. Packaging-wise, the Supreme Leaf stands out because of its bold and vibrant color scheme on both its band and box. Each of the batches that have been released has been a single vitola and has been reached in a different size. For the fifth batch, Aganorsa Leaf released a 5 x 54 box-pressed Robusto. It’s not the first Robusto that was released as the original series was a slightly smaller 5 x 52 box-pressed Robusto. Today we turn our attention to the 5 x 54 Robusto.

The Aganorsa Leaf Supreme Leaf consists of 100% Nicaraguan tobaccos from the Aganorsa farms. The blend is described as Corojo ’99 dominant. Production is handled at the company’s TABSA factory in Estelí, Nicaragua. An allocation of 2,750 ten-count boxes was produced of 5 x 54 Robusto. This is the largest batch released to date of the Supreme Leaf – which has been a cigar highly in demand by consumers and retailers.

If you are keeping score at home, here are the five batches released:

The Supreme Leaf Robusto 5 x 54 opened up with notes of natural tobacco, dried fruit, earth, wood, and black pepper. As the cigar moved through the first third the earth and fruit notes surfaced as the primary notes. Later in the first third, the natural tobacco notes displaced the fruit notes as a primary note. The second third saw a brief appearance of some caramel sweetness. The natural tobacco and earth continued to be the primary notes for the duration of the smoking experience with the wood, pepper, and fruit notes rounding things out. The pepper increased in the latter part of the second third and at the beginning of the final third. While the pepper didn’t move into the forefront of the flavors, it remained the most prominent of the secondary notes.

The Supreme Leaf Robusto 5 x 54 started out as a medium-strength, medium to full-bodied smoke. Both attributes increased in intensity and by the final third, the strength crept into medium to full territory. The burn of the cigar maintained a straight burn line and straight burn path, but required frequent touch-ups. As for the draw it was on the open side, but not loose (normally I prefer some resistance on the draw).

The Aganorsa Leaf Supreme Leaf series has been a fun one to compare how the different vitolas create different nuances with this blend. One thing is for certain, the best sizes of this blend has been in the Robusto format. In both the 52 ring and 54-ring formats, the Robusto offered the best flavor and the most in terms of complexity. The 52 gets the edge in terms of overall performance, but this 54 ring gauge size also performed admirably coming in at a solid 89. It’s a cigar I would steer towad a more experienced cigar enthusiast. As for myself, the 5 x 54 is also a cigar I would buy and smoke again.

Back in September, Ben Lee of The Smoking Syndicate and Cigar Coop assessed the Aganorsa Leaf Supreme Leaf Torpedo and gave it a 91. Note: Due to age restrictions, you will need to click on Watch on YouTube to watch this video.