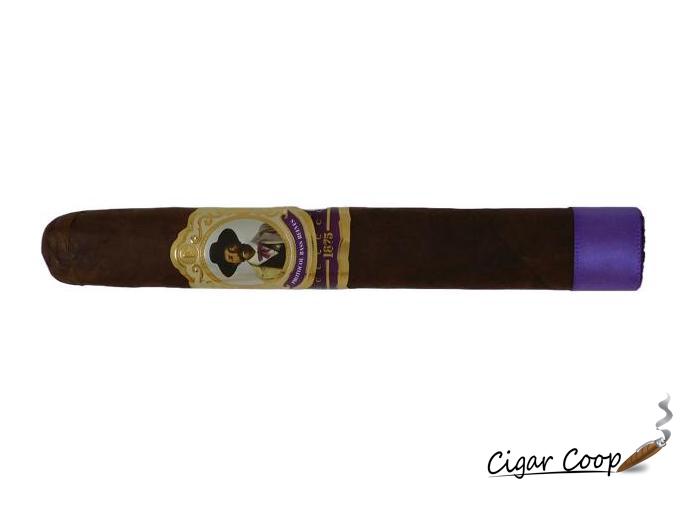 In 2021, Protocol Cigars would release the third installment of its Lawman Series, the Protocol Bass Reeves. The Protocol Lawmen Series pays homage to historical figures in law enforcement. In 1875, Bass Reeves was one of the first Black U.S. Deputy Marshals. According to Protocol Cigars, Bass Reeves arrested 3,000 criminals during his long career in Arkansas and the Oklahoma Territory. Historian Art Burton has said that Reeves was the inspiration for the character of the Lone Ranger. Like the previous two installments of the Lawman Series, Bass Reeves is available in both a Natural and Maduro blend. Today we take a closer look at the Protocol Bass Reeves Maduro blend. 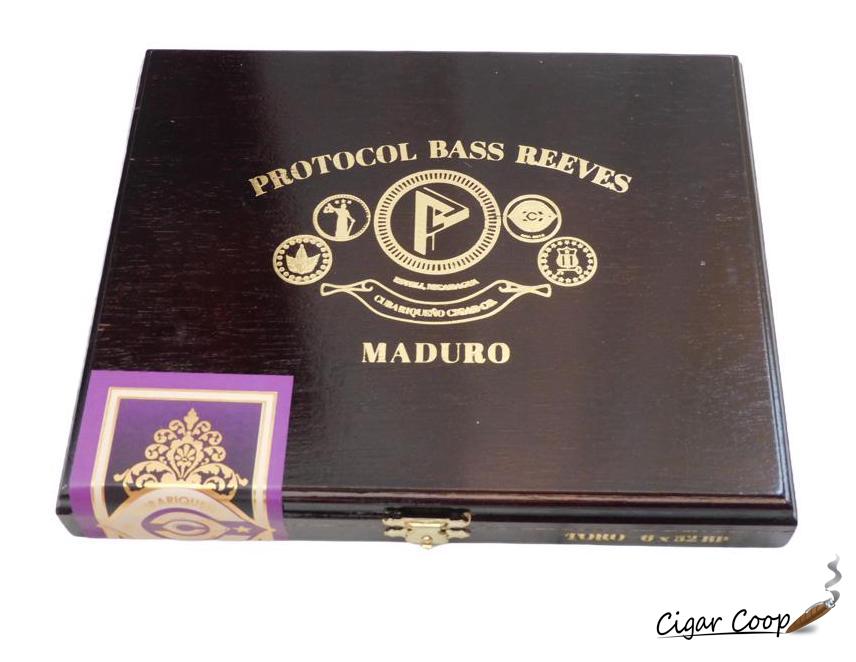 In addition to the Lawmen Series paying homage to historical figures in law enforcement, it is also a series of cigars intended to be a more premium offering in the Protocol Cigars portfolio as a whole. This is reflected in both the blends and the corresponding packaging. To date, there have been three installments to the Lawmen Series with a fourth to be released later this year or early next year.

Without further ado, let’s break down the Protocol Bass Reeves Maduro and see what this cigar brings to the table.

The Protocol Bass Reeves Maduro is the first 100% Nicaraguan puro in the Lawman Series. The cigar is highlighted by a Dark Habano wrapper from Nicaragua. Production comes from AJ Fernandez’s San Lotano factory in Ocotal, Nicaragua.

The Protocol Bass Reeves Maduro has been released in one size – a 6 x 52 box-pressed Toro. This is the same size and format that the other installments of the Lawmen Series were first released in. The cigars were presented in ten-count boxes. 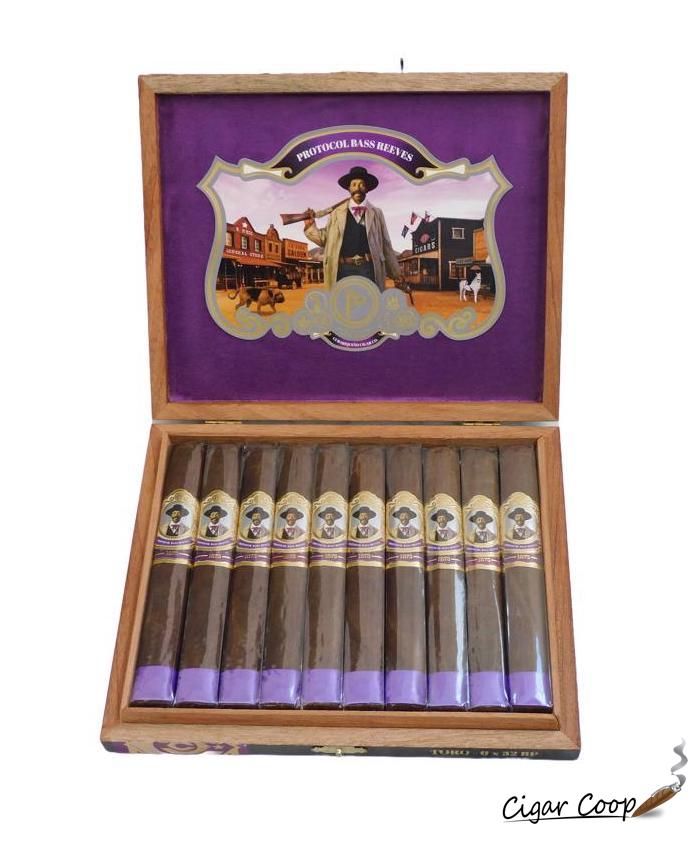 The Nicaraguan Habano Maduro wrapper had a chocolate color to it. Upon closer examination, there was a slight amount of mottling on the wrapper. The wrapper also had a light coating of oil on it. There were some very thin visible veins as well as some visible wrapper seams. There seemed to be a slight soft press to this cigar. It seemed like a softer press than what was on the Sir Robert Peel and Eliot Ness releases. 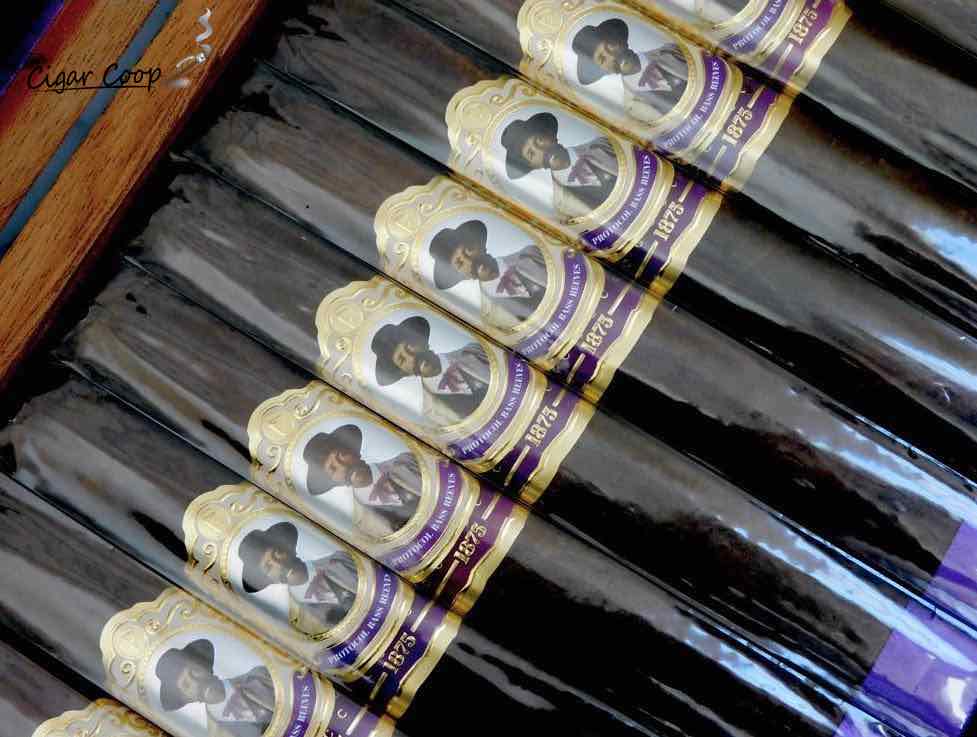 Close Up of the Protocol Bass Reeves Maduro

There are two bands on the Protocol Bass Reeves Maduro. The primary band has a gold, purple, and white color scheme. On the center of the band is a portrait of Bass Reeves on a silver background. Above the picture is a gold Protocol “P” on a gold circular field. Just under the picture is a purple ribbon-like design with the text “PROTOCOL BASS REEVES” in white font. Surrounding the portrait is a gold shield and a series of gold medallions. There are images on each of the gold medallions that have significance to Protocol Cigars and law enforcement in general. Co-owner Juan Cancel has referred to these as “Easter eggs.” To the left of the portrait is the text “ESTELI NICARAGUA” in white font on a purple background while to the right is the text “LAWMEN SERIES – also in white font on a purple background.

The primary band rests over a secondary band. This band is purple in color with some gold-colored “C”s arranged in a wallpaper-like fashion. The lower part of the band has the text “1875” (representing the year Reeves was sworn in as a U.S. Deputy Marshal.) The lower part of the band has gold trim with a slightly irregular edge. A purple ribbon surrounds the footer of the cigar.

A straight cut was used to remove the cap of the Protocol Bass Reeves Maduro. Once the cap was removed, it was on to the pre-light draw experience. The cold draw delivered notes of cocoa, cedar, and hay. Overall this wasn’t the most exciting of pre-light draws. Since the pre-light draw experience is not factored into the numerical score and value rating, there was no loss of points here. At this point, it was time to remove the ribbon around the footer of the Protocol Bass Reeves Maduro, toast up the footer of the cigar and move into the smoking phase.

The start of the Protocol Bass Reeves Maduro kicked off with earth, coffee, hay, red pepper, and mineral notes. Early on the earth and cedar notes moved to the forefront with the coffee, hay, pepper, and mineral notes settling in the background. The pepper notes had a slight edge over the other background notes. There also were additional layers of cedar and pepper on the flavor profile.

The second third of the Protocol Bass Reeves Maduro saw the cedar and pepper notes become a little less aggressive. This left the earth notes as the primary note. The coffee, hay, and mineral notes were also present with the cedar and pepper in the background. The flavors delivered a slight drying effect on the palate.

The final third saw the earth notes remain grounded in the forefront. The cedar note returned to the forefront and now the pepper was a little more pronounced. Meanwhile, there still were coffee, hay, and mineral notes that could be detected. This is the way the Protocol Bass Reeves Maduro came to a close. The resulting nub was soft to the touch and cool in temperature.

The Protocol Bass Reeves Maduro did require multiple touch-ups to maintain a straight burn line and straight burn path. The cigar required more frequent touch-ups than I prefer. The resulting ash was light gray and nearly white in color. The ash was on the firmer side. As for the burn rate and burn temperature, both maintained ideal levels. 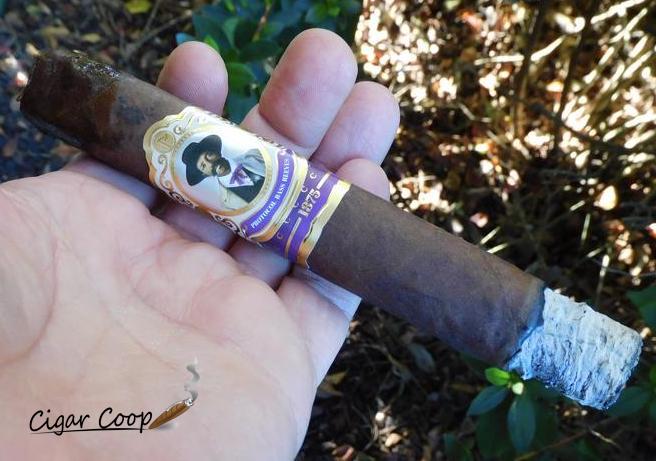 The draw to the Protocol Bass Reeves Maduro had a touch of resistance to it. This made for an ideal draw in my book. At the same time, this was a low-maintenance cigar to derive flavor from.

The Protocol Bass Reeves Maduro started out with medium strength and medium to full-bodied flavors. There was a slight increase in the intensity levels of both attributes. In the end, the Bass Reeves Maduro stayed in the medium strength range and medium to full-bodied range throughout the smoking experience. In terms of strength versus body. the body maintained the edge from start to finish.

There were three problems I had with the Protocol Bass Reeves Maduro. First up was the drying effect that developed on the cigar during the second third; Second, the flavors seemed to become off balance from the very beginning; and finally the flavors themselves simply lacked any sort of a wow factor. This cigar comes in at 86 points. Protocol Cigars has built one of the stronger regular production portfolios out there, but the Bass Reeves Maduro falls well short of what I’ve seen from the company before. In the end, this is a cigar I’d pass on and am likely to not revisit anytime soon.