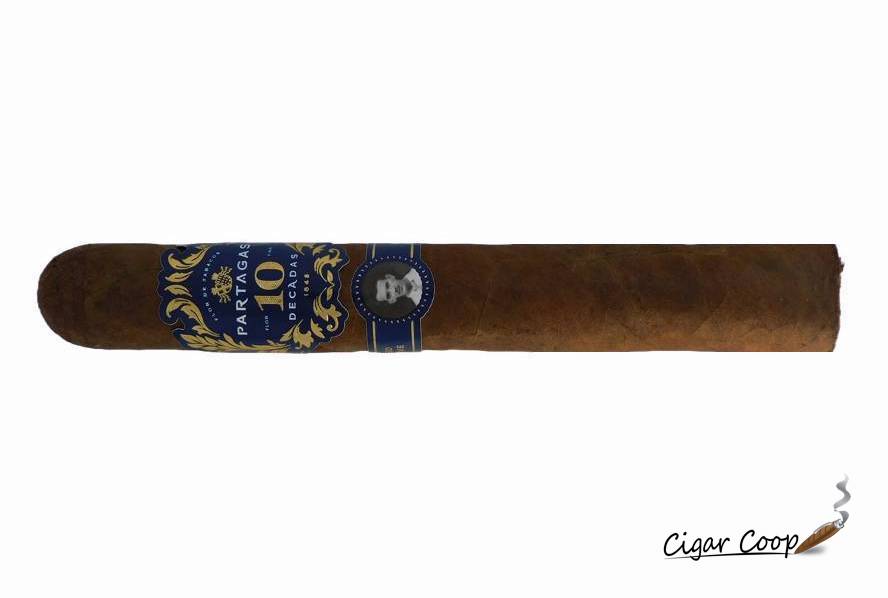 In 2005, General Cigar Company would release a limited-production cigar known as the Partagas Limited Reserve Decadas. The Decadas was highlighted by a ten-year-old Cameroon wrapper with aged tobaccos. The series would run until 2009, but during that time the Decadas was a popular one among cigar enthusiasts. In 2019, after a ten-year hiatus, the Partagas Decadas would make a return. It also would return in 2020 and while each featured a different blend, both would incorporate a ten-year-old Cameroon wrapper. Things would change for the 2021 installment of the Partagas Decadas. First, the Partagas brand was moved from General to Forged Cigar Company under the Scandinavian Tobacco Group (STG) umbrella. Second, instead of using a ten-year-old African Cameroon wrapper, the wrapper would be a leaf grown in Brazil from a Cameroon seed. While the age of the Brazilian-grown is not known, it still is listed as a Decadas Cigar. It’s the cigar we will take a closer look at today.

Partagas brand traces its roots back to Cuba in 1845 when it was founded by Don Jaime Partagás. The brand was nationalized following the Cuban Revolution and owner Ramon Cifuentes Toriello fled Cuba. The Partagas Decadas 2021 also pays homage to an important event in the history of the brand. The 60th anniversary of when Partagas brand founder Ramon Cifuentes fled Cuba was in 2021. Eventually, Cifuentes would make his way to the U.S. and would re-launch the non-Cuban version of the Partagas brand that is sold in the STG portfolio today.

Without further ado, let’s break down the Partagas Decadas 2021 and see what this cigar brings to the table.

The Cameroon wrapper of the Partagas Decadas 2021 comes from the Bahia region of Brazil. The blend also features a Connecticut Havana binder and fillers from the Estelí, Jalapa, and Ometepe regions of Nicaragua. Production comes from General Cigar Dominicana in Santiago, Dominican Republic.

The cigar comes in one size – a 6 x 52 Toro. Each cigar is packaged in an individual coffin with a total of ten coffins per box. 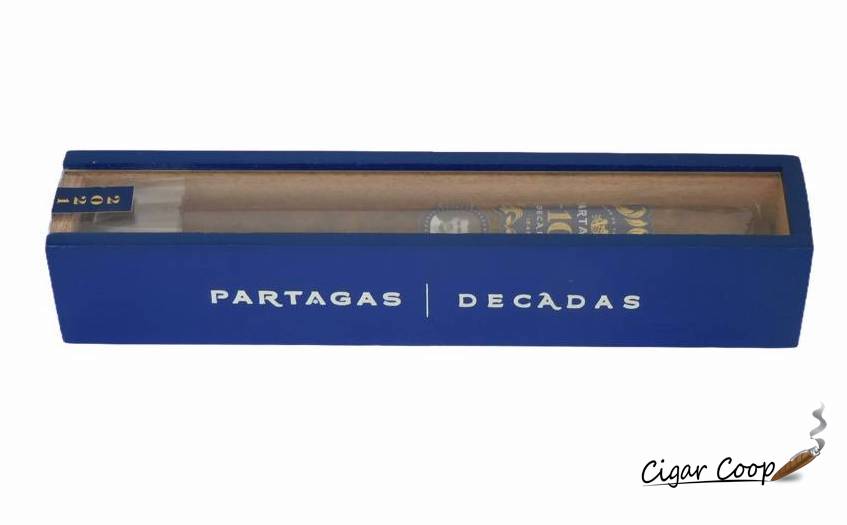 Coffin of the Partagas Decadas 2021

The Brazilian-grown Cameroon wrapper of the Partagas Decadas 2021 is on the darker side for a Cameroon wrapper. It isn’t “maduro” dark, but is “medium plus” in terms of a darkness scale. There was some light oil on the surface. The surface of the wrapper had some mottling on it. There were some visible veins and thin visible seams. There was a slight bumpiness on the surface. As for the coffin, it has a clear plastic slide top to it.

Prior to lighting up Partagas Decadas 2021, a straight cut was used to remove the cap. Once the cap was removed, it was on to the pre-light draw. The cold draw delivered a mix of malt, citrus, and earth notes. This wasn’t a cookie-cutter pre-light draw, and it delivered enough to satisfy me. At this point, it was time to light up the Partagas Decadas 2021 and see what the smoking phase would have in store.

The Partagas Decadas 2021 opened up with more notes of malt, citrus, and earth. The citrus notes had more of a lime quality to them. The malt and lime notes moved into the forefront. The earth notes settled in the background where they were joined by some baker’s spice. The retro-hale was mostly black pepper, but some of the baker’s spice mixed in.

Later in the first third of the Partagas Decadas 2021, the baker’s spice increased in intensity. This continued into the second third. During the second third, pepper surfaced on the tongue and also increased in intensity. Close to the midway point, the baker’s spice joined the malt in the forefront. Meanwhile, the lime receded into the background joining the pepper and earth. The pepper component got stronger on the retro-hale.

There wasn’t much change in the last third. The malt and baker’s spice remained primary and this was rounded out by the lime, pepper, and earth notes. This is the way the Partagas Decadas 2021 came to a close. The resulting nub was soft to the touch and cool in temperature.

On each of the samples of the Partagas Decadas 2021, the cigar started out with a straight burn line and straight burn path. At some point, each cigar smoked required more in the way of touch-ups, and in each case, there was a point where I felt the number of touch-ups required was somewhat excessive. The cigar had a mostly light to medium gray ash. The ash skewed toward the firmer side. Both the burn rate and burn temperature were ideal. 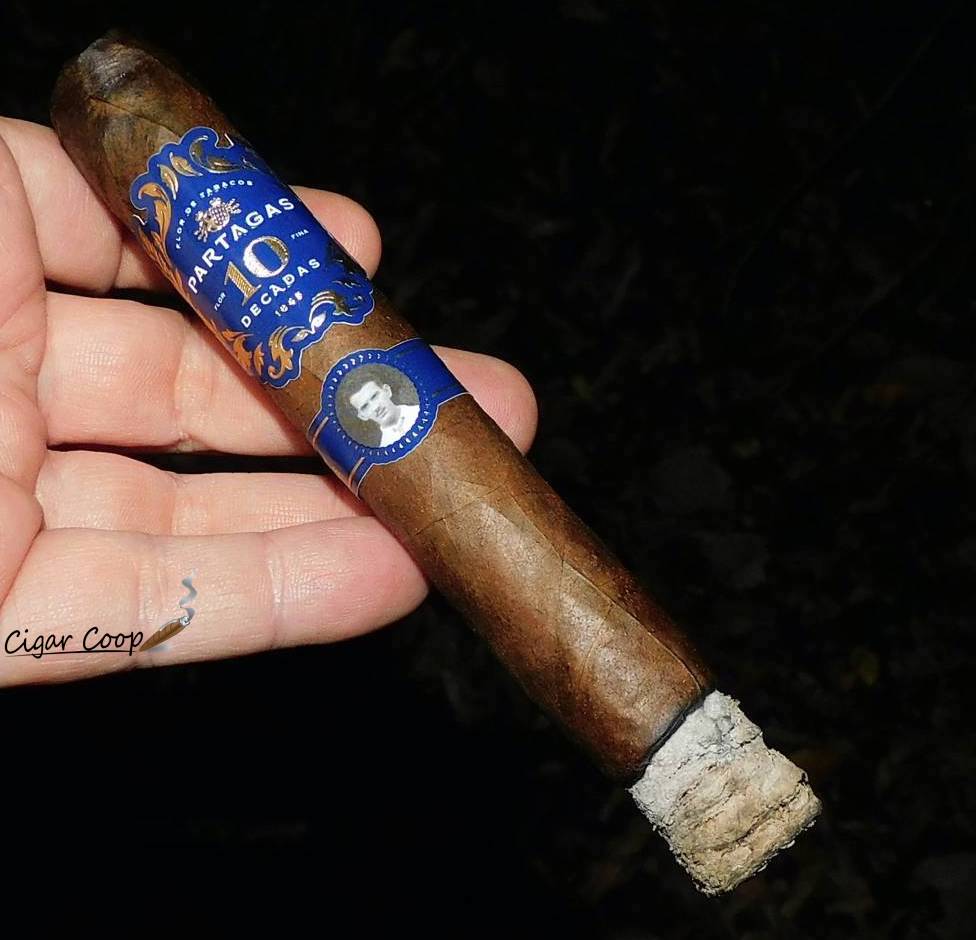 Burn of the Partagas Decadas 2021

The draw to the Partagas Decadas 2021 was excellent. It had a touch of resistance to it – which is something I consider to be a positive. At the same time, this was a low-maintenance cigar to derive flavor from.

For 2021, there were two major changes to the banding and packaging. First, the bands were changed to blue backgrounds. On all of the previous iterations, the band used different green and white color schemes. Second, this is the first time coffins were used for the cigars. Previously glass tubes were used.

On one hand, I like the banding change from green and white to blue given the African Cameroon wrapper was changed to Brazilian-grown Cameroon. On the other hand, while the coffins look nice, I really miss the glass tubes – they were a signature of the Decadas line for a long time.

When it comes to introducing something innovative like a Brazilian-grown Cameroon wrapper, it is going to end in one of two ways. Either it is going to be anointed the next great thing or it’s going to be disappointing. When Justo Eiroa introduced a Honduran-grown Cameroon wrapper, it was met with great fanfare. I wanted to be able to say the same thing about Brazilian-grown Cameroon, but I can’t. It’s unfair to judge this tobacco on one blend. This isn’t to say the Partagas Decadas 2021 is a bad blend, but it didn’t have me doing handstands. On top of that, the Partagas Decadas 2021 is not an inexpensive cigar as it carries a $17.99 price point. In the end, this is definitely a cigar you will want to try a sample first before investing.