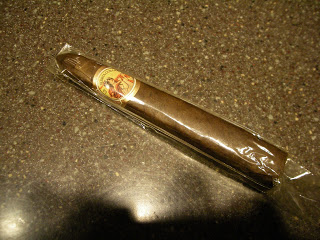 The Obelisco is actually the third (and from what I’ve heard final installment) of the Artesanos series (the other two being the Artesanos de Tabaqueros and the Artesanos de Miami).   The thing that makes the Obelisco unique is the vitola.   The concept behind this was to create a cigar shape to replicate the “Monument to the Heroes of the Restoration” located in Santiago, Dominican Republic.   The end result is a a uniquely shaped pyramid cigar.

The blend complements the shape of the cigar very nicely.   This is a pretty interesting permutation of tobacco:

With the blend described above, I expected a level of complexity on this cigar and I clearly was not disappointed with what this cigar delivered.  The initial smoke produced notes of earth, wood, and roasted nuts.   A few minutes later, flavor notes of cedar spice and tang were added to the already existing.  As the cigar progressed to the second half, a unique sweetness emerged.   There also was a slight hint of cayenne pepper.    As the finish to the cigar comes, the sweetness and pepper levels off and I notice a return to the initial earth tones.

For such an unusual shape vitola, the burn on this cigar was very good (although I do get a little flowered ash from time to time).   The cigar basically never needs to be touched up.   The draw was a little tight and times – but basically it isn’t too bad.  I’m wondering if some of it was me trying to get used to working this vitola.    A lot of ways, I consider this a lancero that smokes like a box press (chalk this up to the unusual shape)..   While I’ve read some folks had a warm/soft finish, this has not been the case for me – it has consistently been cool and firm giving me a terrific nub,   I chalk up the the quality of the burn to resulting in this great nub.   As for the strength, I would categorize this as medium to full and for body this is definitely full-bodied.

I ended up ranking this #16 for 2010.  Overall, in a highly competitive year for cigars, this is a very good ranking – and it probably outranked a lot of what was on Cigar Aficionado’s Top 25 list.    Don’t look at this cigar as a marketing ploy – despite the unusual shape, this is a very good cigar and one that I would recommend.