It was almost a year ago when word surfaced from Boutique Blends Cigars about the Aging Room WildPack project.  The concept gives cigar enthusiasts an opportunity to select what an upcoming release will be under the Aging Room Cigars line. The WildPack is sold in a ten count sampler pack consisting of five unique blends with two cigars each. Cigar enthusiasts can then go to a web-site provided by Aging Room Cigars and score a blend based on various attributes.  The WildPack was showcased at the 2013 IPCPR Trade Show and was released this past fall.  Today I take a look at one of the blends known Aging Room T248 or as WP-1 (WildPack Number #1). Overall I found this to be an excellent milder offering by Boutique Blends Cigars.

As I have smoked through the blends, I have felt that these cigars are all quality blends. I looked at each WildPack cigar more like a limited production cigar by Boutique Blends.  The end result of the voting is that one of these will become a more widespread production run.

At the time of this assessment the “winning” blend, this is done by consumers logging on to a  a web-site available from Boutique Blends. Consumers can score each of the following attributes from 1 to 5 on the blend: aroma, flavor, strength, complexity, balance, and finish.

Late last year, there was some confusion when the Aging Room Quattro T59 was announced.  The confusion happened where it was believed this was the winning WildPack blend.  It turns out it was based on the WP-IV (M-338) and not the exact blend.  This was explained by company President Rafael Nodal:

“The Aging Room WildPack is part of our strategy to involve the consumers in our blending process.  The selection of the new blend (T59) for the release of the Quattro is only the beginning as we continue to search for the next blend release with the help of the consumers who continue to vote from the WildPack blends.”

Like many Aging Room Cigars, the 248 derives its name using the day of the week, day of the year notation.  In this case it is Tuesday or Thursday and the 248th day of the year.  Without further ado, let’s take a closer look at the Aging Room WildPack T248.

Boutique Blends has not disclosed details of the blend components:

All of the WildPack cigars are in a “Vivace” which is 6 x 50 sized toro.  As mentioned each sampler pack contains 2 cigars of each of the 5 blends for a total of 10 cigars.  Boutique Blends has mentioned there has been a production run of 3,000 boxes – translating to 30,000 cigars or 6,000 cigars per blend.

While blend specifics have not been disclosed, this cigar visually has all of a shade grown Connecticut seed wrapper.  The wrapper has a very light brown color and the complexion of the wrapper is somewhat oily.  There are visible wrapper seams and visible veins – giving the wrapper a very rustic look to it.

The band of the band has primarily a metallic blue, white, and gold color scheme.  There are four square panels on the band.  Going clockwise, the first panel has the Aging Room logo in gold font on a metallic blue background.  The blue panel has white and gold trim above and below it.  The second panel has a white background with the text “WP-1 T-248” in a very thin blue font.  The third panel has another metallic blue panel with the text “WILDPACK” in white font sitting on it.  Above that text is a gold paw print with three red stripes over it.  There is also white and gold trim above and below the blue background.  The final panel is white with the WildPack logo on it in blue.

There is a sleeve on the bottom third of the cigar that is gray in color with blue and black font that resembles an evaluation sheet for the blend.

Prior to lighting up my T248, I went with a straight cut to start things off.  After clipping the cap, I moved on to the pre-light draw.  The flavors of the pre-light draw were subtle – and definitely on the milder side as I picked up notes of wood and cream.  Overall I considered the draw of the WildPack T248 to be satisfactory.  After completing dry draw, I removed the sleeve from the footer, lit up the cigar, and awaited what the overall smoking experience would deliver.

As the T248 moved through the first third, the citrus and cream formed an interesting orange cream combination.  The cedar spice became secondary while the wood notes were more of a tertiary flavor.

In the second third, the cream notes were still present.  The orange citrus lost a bit of its sweetness.  The cedar notes remained secondary and the wood notes were still a distant tertiary note.  For the most part, this was the flavor profile for most of the remainder of the cigar experience.  I found the last part of the cigar to still be creamy with some cedar spice, but much of the sweetness had gone.  The resulting nub was cool in temperature and slightly soft to the touch.

Construction-wise, I found the Aging Room WildPack T248 to be excellent.  This was reflected very nicely in the burn and draw. The burn remained relatively straight from start to finish – and did not require much in the way of touch-ups.  The resulting ash was firm with a bright white color.  The burn rate and burn temperature were ideal. 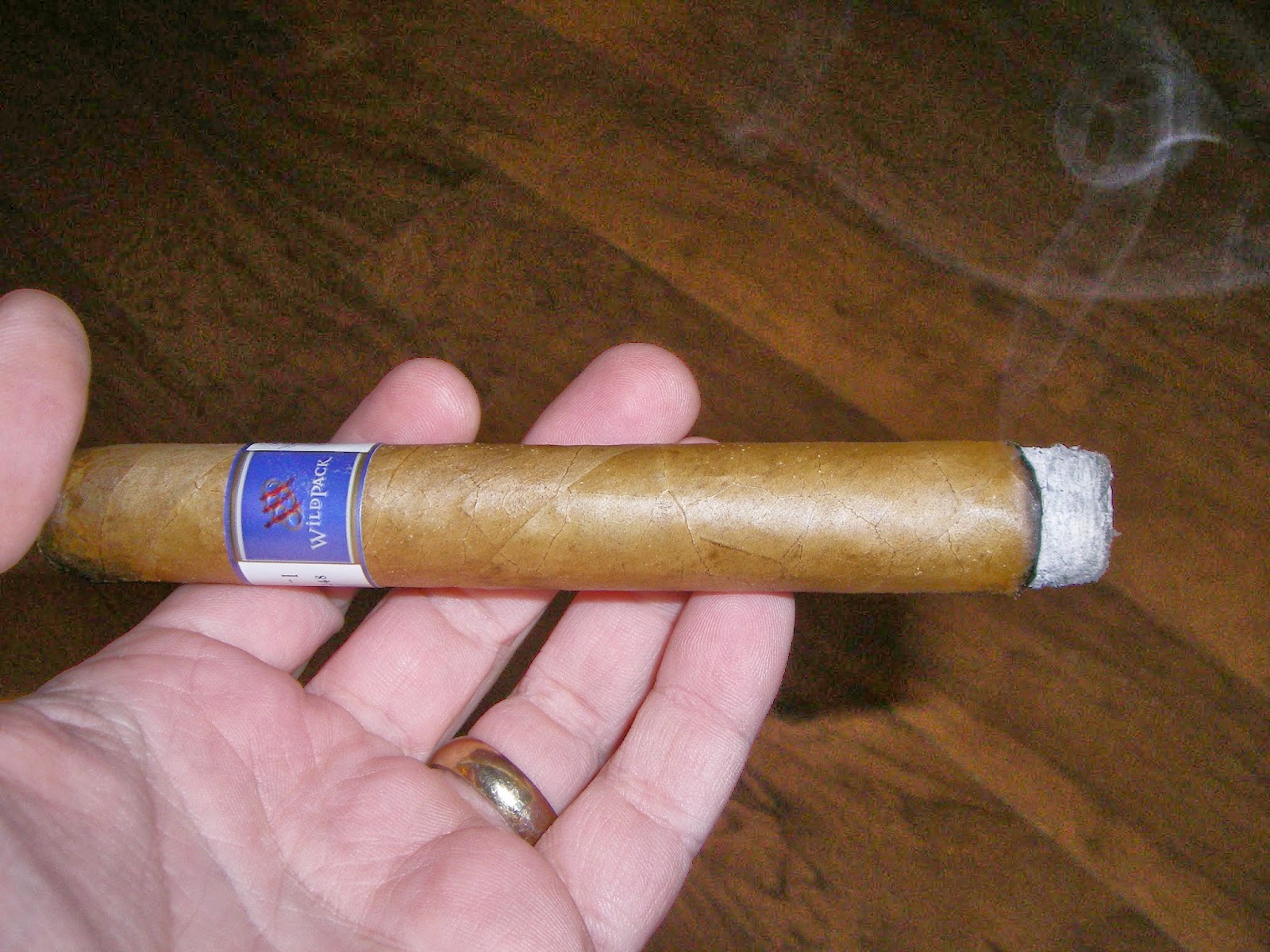 The draw to the T248 was outstanding.  For a cigar that produced a decent amount of smoke, this was not a loose draw.  This made for an enjoyable smoke from start to finish.

This cigar is going to be a cigar that falls in the mild to medium range in terms of both strength and body.  If this is a shade grown Connecticut seed wrapper, this isn’t going to try to push the limits of both of these attributes for a cigar with that wrapper.  I found in particular the body produced more in the way of subtle flavors and it worked with this blend.  Both the strength and body balance each other nicely – with neither attribute overshadowing the other.

As I mentioned, the WildPack stands on its own in terms of the blends that are produced.  Each of the cigars are very different.  The T248 is a solid cigar for one that has a mild to medium profile in terms of strength and body.  I found it a little more dialed back in body than the current Aging Room Havao Connecticut which is core line offering, but one that is equally satisfying.  This is a cigar I would not hesitate to recommend to a novice cigar enthusiast.  Experienced cigar enthusiasts who want something in that mild to medium range will be satisfied with it.  As for myself, this is a cigar I would smoke again.  This cigar is worthy of a five pack in my book.