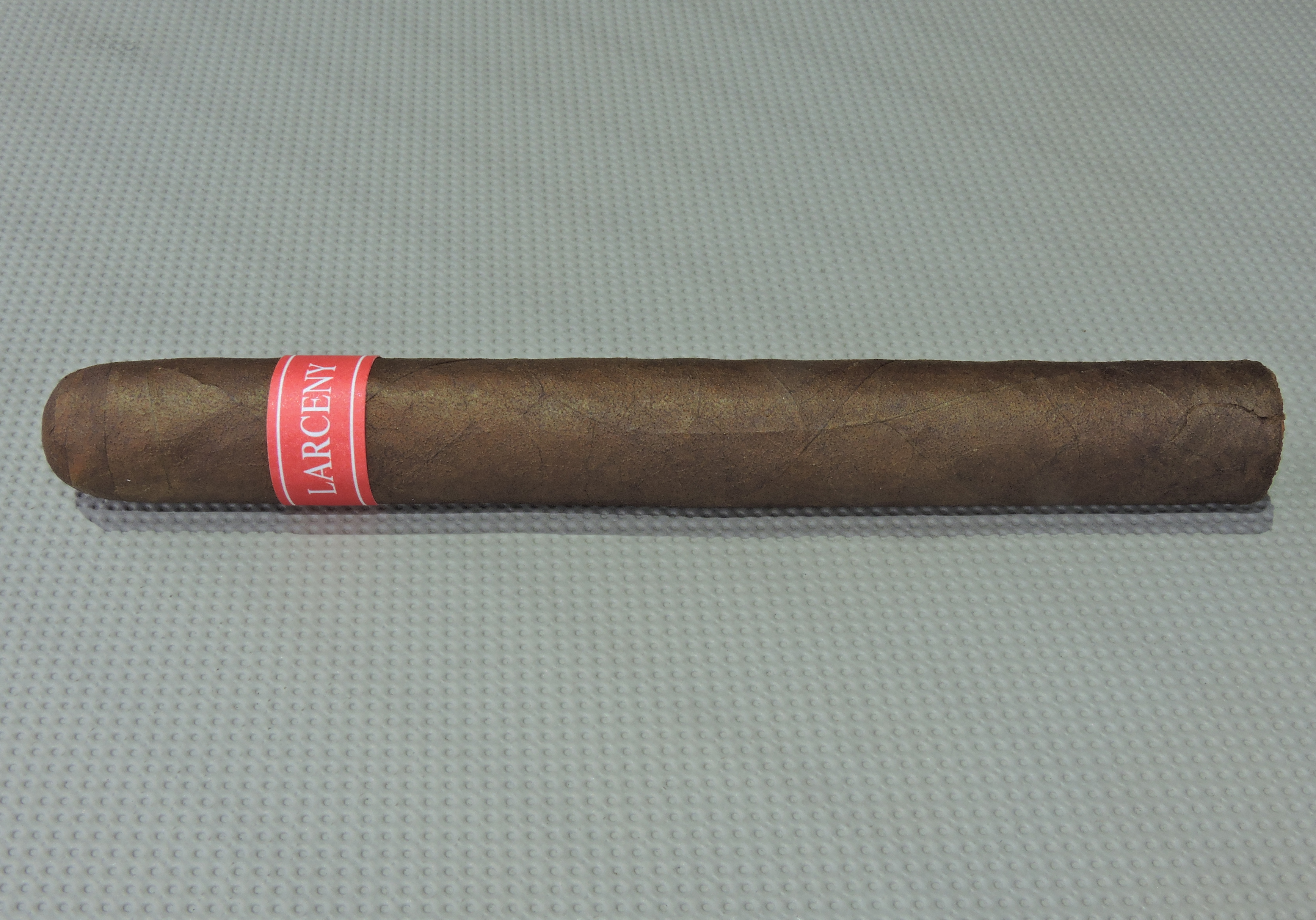 Larceny is the first collaborative project between cigar industry veterans Eddie Ortega of Ortega Premium Cigars and Sean Williams of El Primer Mundo (EPM). The premise of this collaboration is that Ortega and Williams would each produce a blend to satisfy the other’s palate. The cigars received by each brand owner would be released under that brand owner’s name. The result would be two limited production cigars called Ortega Larceny by Sean Williams and EPM Larceny by Eddie Ortega. There was one additional twist to this project – Ortega and Williams would work with Erik Espinosa’s La Zona factory in Nicaragua. Ortega and Espinosa are best known for founding EO Brands – a company that produced lines such as 601, Murcielago, and Cubao. Today we take a look at one of the blends – the Ortega Larceny by Sean Williams. The combination of Ortega, Williams, and Espinosa works well again as they deliver another great smoke.

Ortega and Williams recently appeared on Episode 140 of Stogie Geeks and discussed how this project was a true collaborative effort between Ortega, Williams, and Espinosa. Ortega mentioned on the show that he and Espinosa had been talking for a while about doing something together, and the Larceny project seemed like the perfect opportunity to do so. While we have been told the cigars are being distributed by Ortega Premium Cigars, both Ortega and Williams are jointly promoting the brand.  The partnership seems to be working quite well and as a result they announced a second small batch project called Miami Stash that is coming from El Titan de Bronze.

The two resulting cigars are packaged in 20 count boxes with ten cigars of Ortega Larceny and ten cigars of EPM Larceny. This is a small batch project with only 400 boxes total being produced. Ortega and Williams said after announcing Larceny, they sold out their entire allotment to the 42 retailers that were selected to carry it.

As for the project name, “Larceny” was selected to poke a little fun at the copycat nature the cigar industry is often accused of having.The slogan “What good is an idea if nobody want to steal it” has been used in the brand’s marketing material.

Without further ado, let’s dive deeper into the Ortega Larceny and see what this cigar brings to the table.

For completeness, we include the blends of both Ortega Larceny and EPM Larceny.

Both the Ortega Larceny and EPM Larceny are currently available in one size – a 6 1/2 x 50 Toro.

The San Andres wrapper of the Ortega Larceny has a chocolate brown color with some colorado red mixed in. Upon closer examination, there is some darker marbling visible.  There is also some oil on the surface of the wrapper.  While there are some thin veins and well hidden wrapper seams, I still found this wrapper to have that San Andres “rough, gritty” feel to it.

Before firing up the Ortega Larceny, I went with my usual choice of a straight cut to remove the cap.  Once the cap was demoed, I proceeded with the pre-light draw ritual.  The dry draw delivered some notes of mocha, earth and some occasional pepper.  Overall, I considered this pre-light draw to be excellent.  At this point I was ready to light up my Ortega Larceny and see what this cigar’s smoking experience would deliver.

The Ortega Larceny started out with notes of mocha, earth, and a mix of assorted pepper notes.  In the early stages, the mocha notes developed a richness and became primary.  The earth notes were in the background.  The pepper was secondary on the tongue, but more prominent on the after-draw.  On the retro-hale, I detected only a black pepper note.

As the Ortega Larceny moved through the first third, I noticed the mocha notes had a little bit of natural maduro sweetness (almost a cross of natural tobacco and cherry) mixed in.  The earth notes remained secondary with the pepper prominent on the after-draw.

During the second third, the maduro sweetness and earth notes became the primary notes.  I did notice the pepper notes start to fold into the full draw.  The mocha notes started to diminish and moved into the background.

By the last third, the pepper notes were in the forefront with the earth and maduro sweetness  There also was still a touch of the mocha flavors remaining.  During this third, I did find the spice to be on the pungent (but not harsh) side. This is the way the cigar experience remained until the end.  The resulting nub was cool in temperature, but soft to the touch.

Overall I found the burn to perform well on the Ortega Larceny. The burn path was relatively straight from start to finish. At times the burn line had some curvature and a slight jaggedness, but these were easily remedied by my lighter.  The amount of touch-ups didn’t prove to be excessive for this cigar.  The resulting ash had a silver gray color.  I didn’t find the ash to be overly tight, but it was not a loose one either.  The burn rate and burn temperature were both ideal. 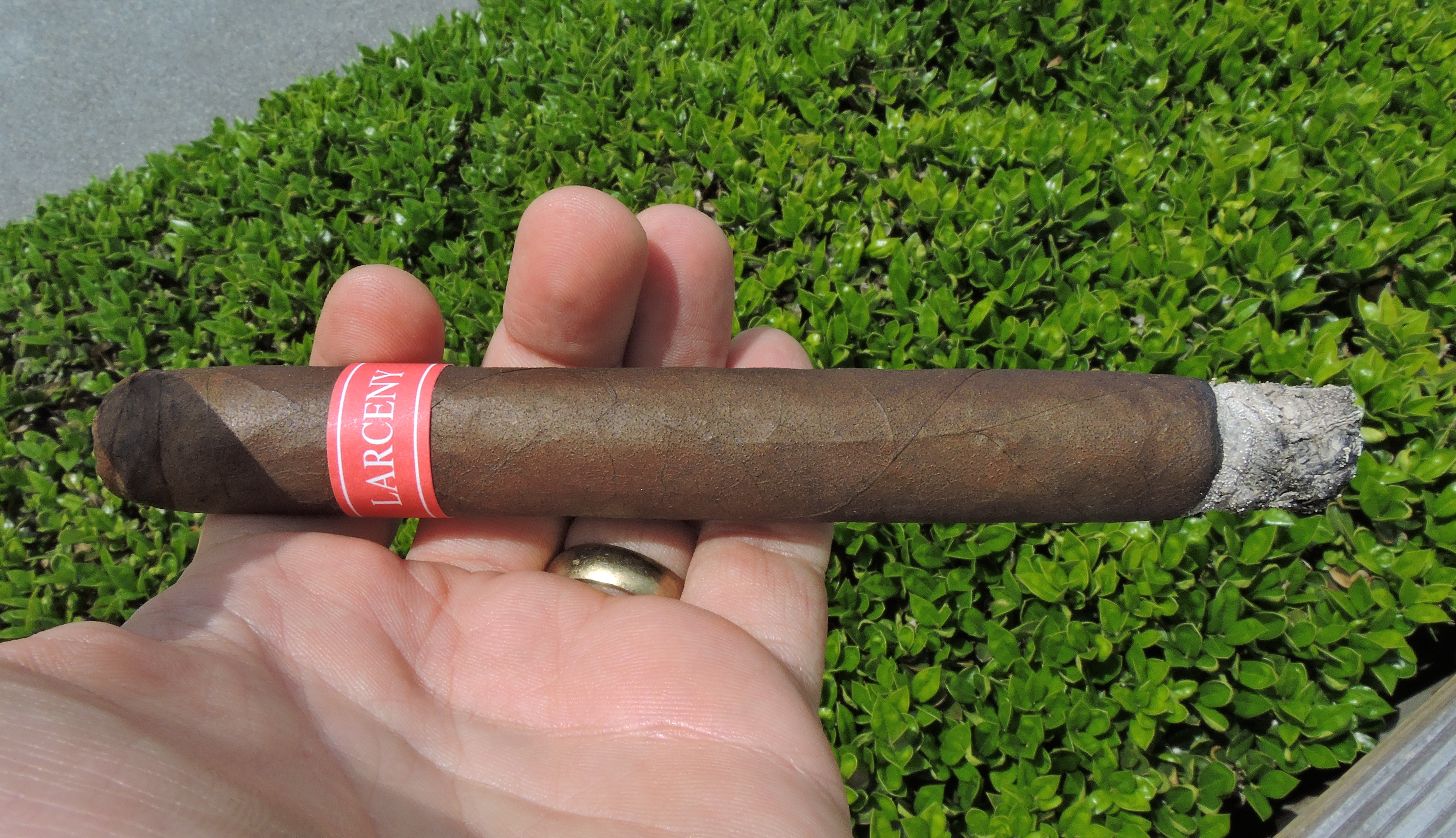 Burn of the Ortega Larceny

The draw was ideal too.  I categorize this as an open, but not overly loose draw.  This made the Ortega Larceny a low maintenance cigar to smoke.

Ortega Larceny is the type of cigar that if you are a fan of San Andres wrapper, and want something with a little more pop, then this is going to be the cigar for you.   I did enjoy the flavors in this cigar – especially in the first half.  The last third did deliver some of that pungent / sharp spice I often get from San Andres wrapper – which is something I’m not the biggest fan of.  Still, the pluses outweigh the minuses with this cigar. The nice thing is Ortega Larceny and EPM Larceny are two very good cigars that are packaged together.  In my book, the edge goes to the EPM Larceny, but that will probably be a personal decision.

I’d probably steer the Ortega Larceny to a more seasoned cigar enthusiast.  As for myself, I would definitely reach for this cigar again.  If you consider Ortega Larceny completely separate from EPM Larceny, it’s easily worthy of a box split.