Without further ado, let’s look at this third installment, The Griffin’s Special Edition 2015 Club Series III and see what this cigar brings to the table

According to The Griffin’s the Rojiza wrapper provides creaminess while the Honduran tobacco in the filler adds some spice.  A Rojiza wrapper has been seen on other Davidoff offerings such as the Davidoff Winston Churchill and Zino Platinum Make of New York. 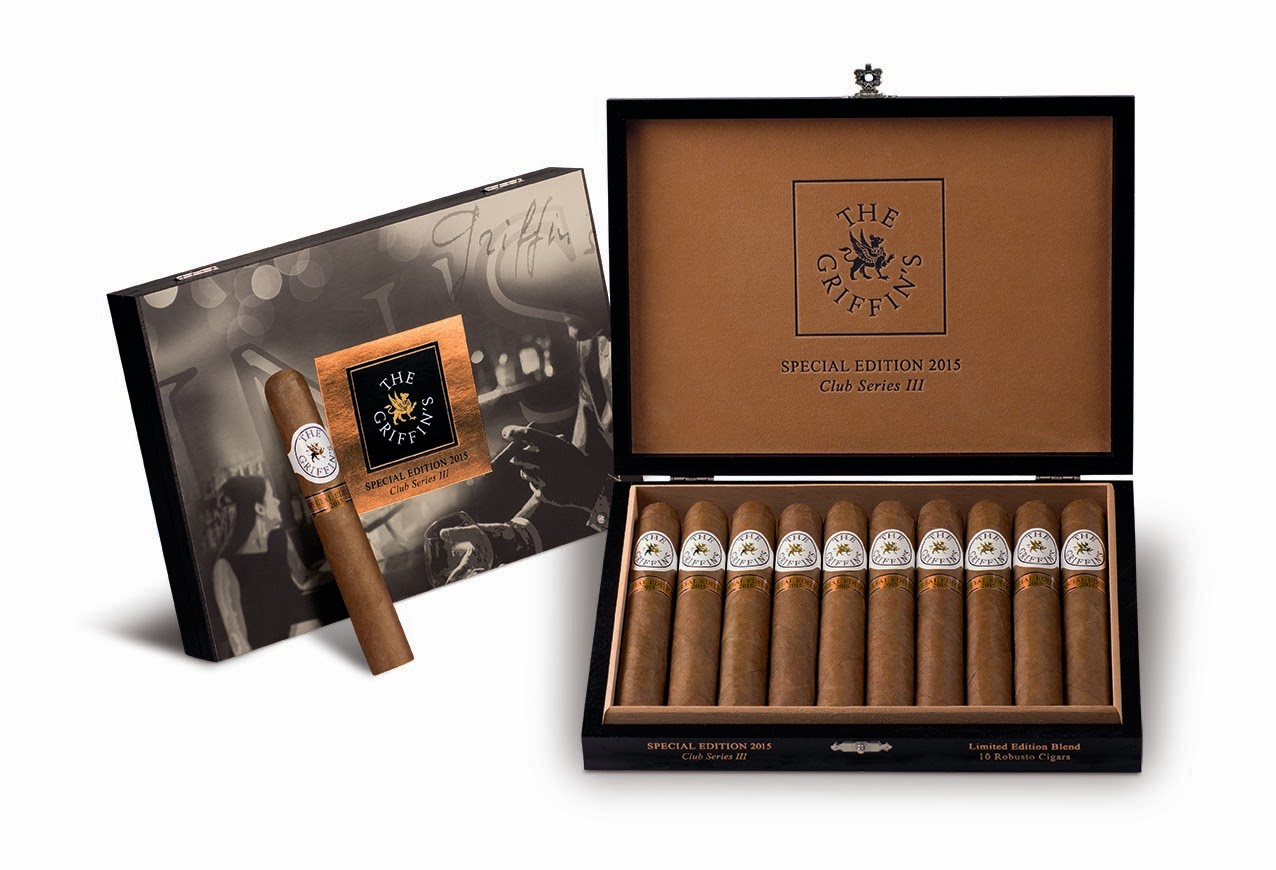 For completeness, we list the other cigars in the series.  All three installments were packaged in ten count boxes.

The Rojiza wrapper of the The Griffin’s Special Edition 2015 Club Series III has a cross of dark caramel and cinnamon coloring.  There was somewhat of an oily sheen to the wrapper.  The wrapper seams were quite thin and not overly visible. Despite the fact there were some visible veins, I found the surface of the Club Series III to be on the smooth side.

There is a secondary band just below the primary one.  It has a metallic copper color to it.  On it is the text “SPECIAL EDITION” in black font with the text “2015” in a smaller black font below it.  There are black and silver pinstriping toward the top and bottom of the band.

Before lighting up the Club Series III, I went with a straight cut to remove the cap. Once the cap was removed, I proceeded with the pre-light draw. The dry draw delivered a mix of natural tobacco, cedar spice, and a touch of floral. Overall I was quite pleased with the pre-light draw experience of this cigar. At this point I was ready to light up The Griffin’s Special Edition 2015 Club Series III and await what the smoking phase would have in store.

The start to The Griffin’s Special Edition 2015 Club Series III picked up where the pre-light draw left off. I picked up rich natural tobacco notes, cedar sweet-spice, and a touch of floral. As the flavor profile took form, the natural tobacco and cedar notes fused in the forefront. The floral notes were in the distant background along with some grassy notes. Meanwhile on the retro-hale, I picked up some notes of black pepper.

By the last third, the black pepper was now more prominent and was in the forefront with the nut flavors. At this point, the cedar / natural tobacco combination and grass notes were more subtle. This is the way the Club Series III came to a close. The resulting nub was outstanding – firm to the touch and cool in temperature.

The burn to The Griffin’s Special Edition 2015 Club Series III was near perfect each time I smoked it. The burn line remained razor sharp from start to finish. The Club House III required minimal touch-ups along the way.  There was also a nice firm charcoal ash firm and it came off the cigar in clean chunks. The burn rate and burn temperature were ideal. Given how good this burn, it was scored with our highest rating – “Exceptional”.

The draw also scored extremely well. It had a touch of resistance – which is something I consider ideal. This made the Club Series III a real enjoyable cigar to puff on.

Overall I found the Club Series III to stay in the medium strength, medium-bodied range from start to finish. There was a slight increase in both attributes along the way, but I felt both stayed under the medium to full range. In terms of strength versus body, both attributes balance each other very nicely.

While this was still a medium smoke, I still would say this was a stronger and fuller cigar than much of the cigars that are (or have been) under The Griffin’s umbrella.

I mentioned in the introduction that The Griffin’s Special Edition 2015 Club Series III is an under the radar cigar for both limited editions and The Griffin’s line. I think it’s also fair to say that The Griffin’s as a whole is one of the most underrated brands out there.  Davidoff has done a great job with this line and the Club Series III is a great example. I liked the fact that the Club Series III offered more in strength and body when compared to other releases in The Griffin’s portfolio. This cigar is also going to offer more in the way of spice than one might expect.  Overall this cigar had excellent flavor, excellent construction, and delivered a nice amount of complexity. This is a cigar I would recommend to an experienced cigar enthusiast. It’s a nice cigar for the novice to graduate to something a little more fuller than a milder smoke.  As for myself, this is a cigar I’d smoke again. It’s certainly worthy of a box split.