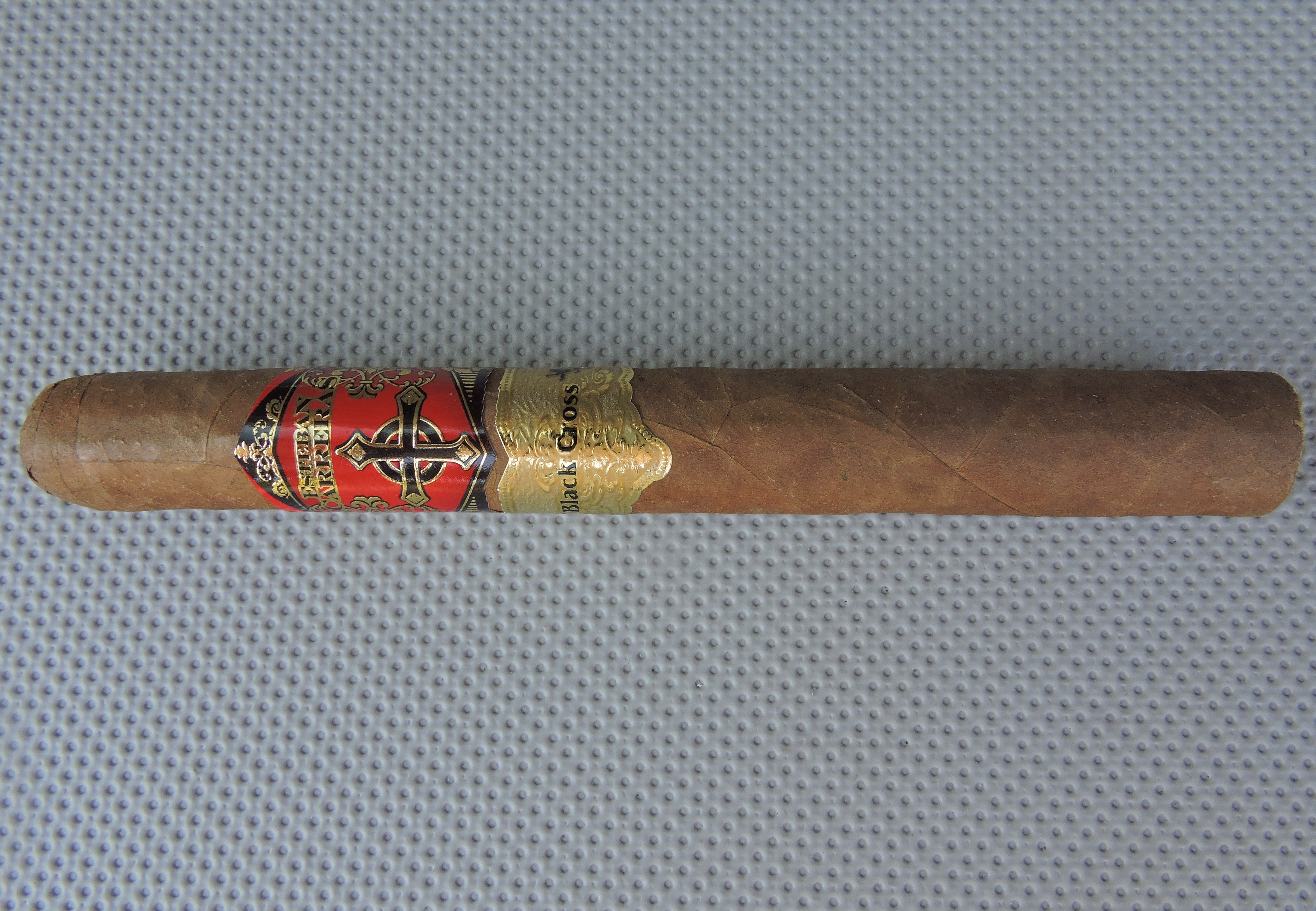 Just prior to the 2015 IPCPR Trade Show, Esteban Carreras Cigars soft-launched a new line called Black Cross. The Black Cross is a project that company owner Craig Cunningham has been working on for the past two years. It was at the 2014 IPCPR Trade Show where word of this project first came out. The cigar was showcased at the 2015 Trade Show. Esteban Carreras Cigars gets its name from the freedom fighter in Cuba who helped get people out of Cuba as Castro was coming into power. The Black Cross ties into this story as it was used as a symbol to identify “like minded people” against the Castro regime. This was done by drawing a black line with charcoal. If the another person crossed that line, then that person knew they were dealing with a like minded person. Recently, I’ve had an opportunity to smoke the Esteban Carreras Black Cross in the Corona size.  Overall I found this to be an excellent cigar with a very unique flavor profile.

Without further ado, let’s take a closer look at the Esteban Carreras Black Cross Corona and see what this cigar brings to the table.

The Esteban Carreras is a Nicaraguan blend that is wrapped with Habano Cafe leaf.

There are six vitolas in the Black Cross line. All sizes are in 20 count boxes except the Cervantes which comes in 10 count boxes.

The Habano Cafe wrapper of the Esteban Carreras Black Cross Corona has a medium brown color with a slight rosado tint. Upon closer examination, some darker marbling can be seen on the surface. There is a light coating of oil on the wrapper giving the cigar a nice sheen. The wrapper itself is not toothy, but there are some visible veins and visible wrapper seams.

There are two bands on the Esteban Carreras Black Cross. The primary band is red in color with plenty of gold adornments on the left and right side. On the center of the band is a black cross with some gold trim. Just below the cross is the text “Esteban Carreras” – also in black for with gold trim.

The secondary band sits just below the primary band. It is a gold foil-styled band. The text “Black Cross” is draped across the center of the band in small black font. To the left and right is a small black image of the Esteban Carreras lion logo.

Prior to lighting up the Esteban Carreras Black Cross, I commenced with a straight cut. After clipping the cap, I moved on to the pre-light draw experience. The dry draw provided a mix of wood and natural tobacco notes. These notes were accented by a slight coffee note and a slight pepper bite. Overall, I considered this to be an excellent pre-light draw. At this point, I was ready to light up the Esteban Carreras Black Cross Corona and see what the smoking phase would have in store.

The start to the Esteban Carreras Black Cross delivered a very unique natural tobacco note. This note almost had a butterscotch quality to it. There were also some notes of wood present. I also detected some baker’s spice in the background along with a touch of cherry. Meanwhile, the retro-hale delivered notes of cedar.

The last third saw the sweetness diminish to a secondary note with the wood and spice notes taking the primary role. The spice notes were now dominated by the pepper note. There was a slight bit of harshness at in the final stages. As for the resulting nub, it was cool in temperature and soft to the touch.

The burn performed extremely well with the Esteban Carreras Black Cross Corona. The burn path was relatively straight. There was a slight curvature on the burn line, but overall the line remained quite sharp and did not require many touch-ups. The resulting ash was tight and firm – coming off the cigar in nice clean chunks. The ash itself had a very light gray color to it. The burn rate and burn temperature were both ideal. 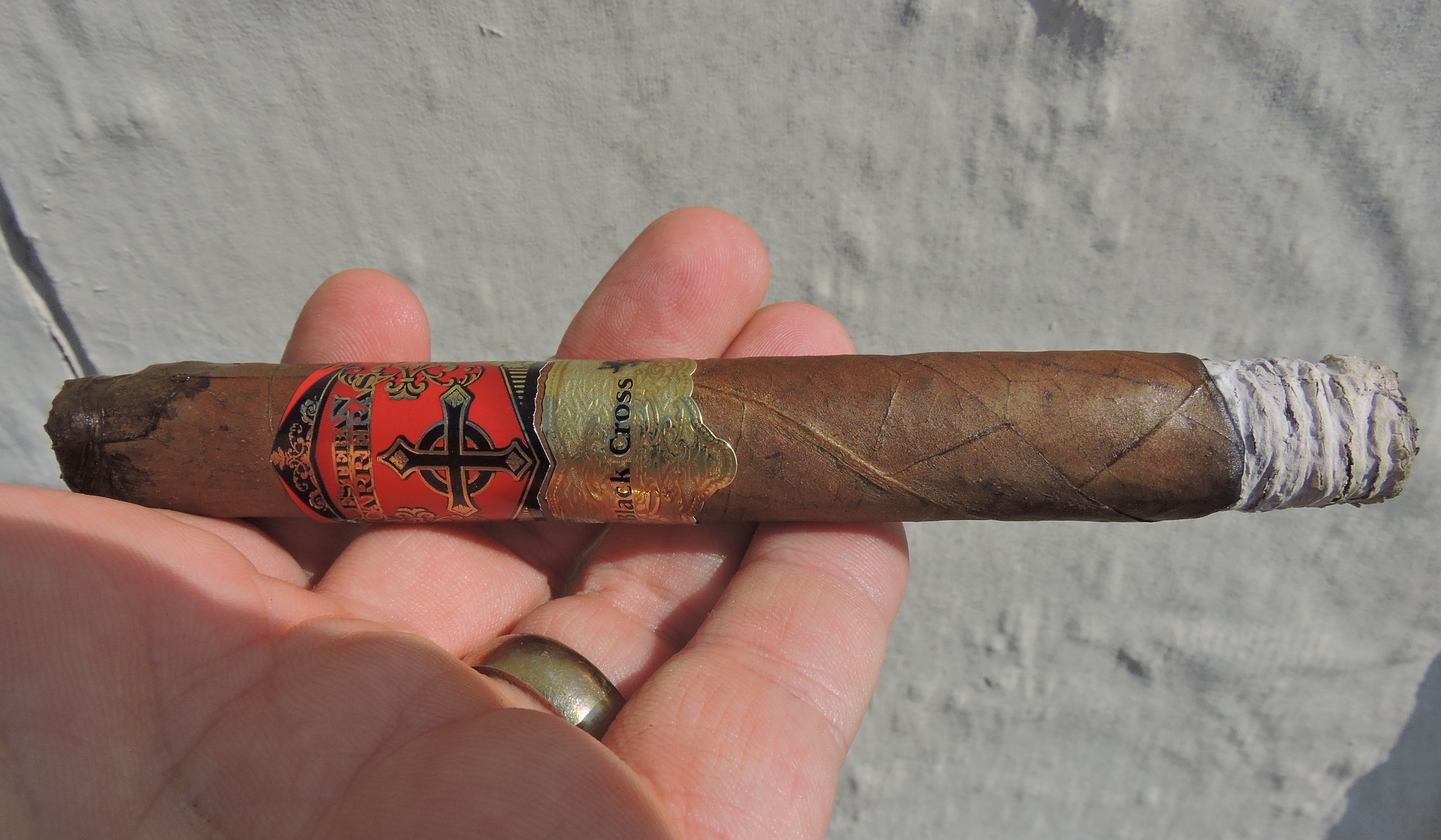 The draw performed excellent as well. It had a touch of resistance to it – which is something I like. This made the Esteban Carreras Black Cross Corona a very enjoyable cigar.

From a strength perspective, I pretty much found the Black Cross Corona to be medium from start to finish. As for the body, there was some nice depth to the flavors and they weighted nicely on the palate. Overall I assessed the Black Cross Corona as being a medium to full-bodied smoke. In terms of strength versus body, I found the body had the edge throughout the smoking experience.

Esteban Carreras has built up a nice portfolio over the past few years. The Esteban Carreras Black Cross adds another fine addition to Craig Cunningham’s lineup. The one thing that really stood out about this cigar is the sweetness. I didn’t find the sweetness to be overwhelming.  At the same time I found it to be a very unique flavor – and one that kept a nice natural tobacco quality to it.  There are plenty of flavor nuances with this cigar and that makes it enjoyable.  This is a cigar I would recommend to the experienced cigar enthusiast – and it is one I certainly would not discourage a novice from trying. As for myself, this is a cigar I would easily smoke again. It is a cigar easily worthy of a box split.