Without further ado, let’s take a look at the Debonaire 33rd Maduro and see what this cigar brings to the table.

With an “A” size cigar, a straight cut is the way to go, therefore I went with my old standby. Once the cap was clipped I moved on to the pre-light draw. The cold draw provided a mix of sweet cocoa, earth, and a slight creamy note. Overall this was an excellent pre-light draw. At this point I was ready to light up the Debonaire 33rd Maduro and see what the cigar experience had in store.

The start to the Debonaire 33rd Maduro delivered notes of mocha, earth, cedar spice, and a creamy component. The mocha notes moved into the forefront early on and delivered a nice sweetness right out of the gate. The earth, cedar spice, and cream were secondary notes. Throughout the first third, there was an occasional time the earth notes floated into the forefront. Meanwhile the retro-hale provided a mix of cedar and white pepper.

During the second third, I found the earth notes joined the mocha sweetness in the forefront. The cedar and cream were now secondary notes. During this stage, I did find the cedar spice increased slowly. There were a few points I picked up a little of the signature Debonaire au-jus note, but this was more sporadic and didn’t play as key a role in this cigar as much as other Debonaire Maduro and Habano cigars.

Toward the later part of the second third, the mocha and earth notes took on more of a black classic coffee note. The cedar spice continued to move toward the forefront of the flavor profile. I still picked up a little chocolate sweetness in the background. The cream notes also diminished greatly.

During the last third of the Debonaire 33rd Maduro, the primary notes were the coffee and cedar spice. I still detected a touch of chocolate in the background. I found a lot less sweetness by this point of the cigar. This is the way the cigar experience came to a close. The resulting nub was slightly soft to the touch, but cool in temperature.

One important point is that the smoking time of this large 9 x 50 cigar averaged about 3 hours and 20 minutes. During this time, I found the burn of the Debonaire 33rd Maduro to perform excellent from start to finish. The burn took a relatively straight path from start to finish.  The burn line also remained relatively straight. There were some touch-ups needed, but nothing that I considered to be an abnormal amount. The resulting ash was had silvery gray color with some dark spots.

The combustion of the 33rd Maduro  was very impressive. The cigar had what I considered to be an ideal burn rate and ideal burn temperature. It was amazing how with 3+ hours that no harshness built up during the last stages of this cigar. 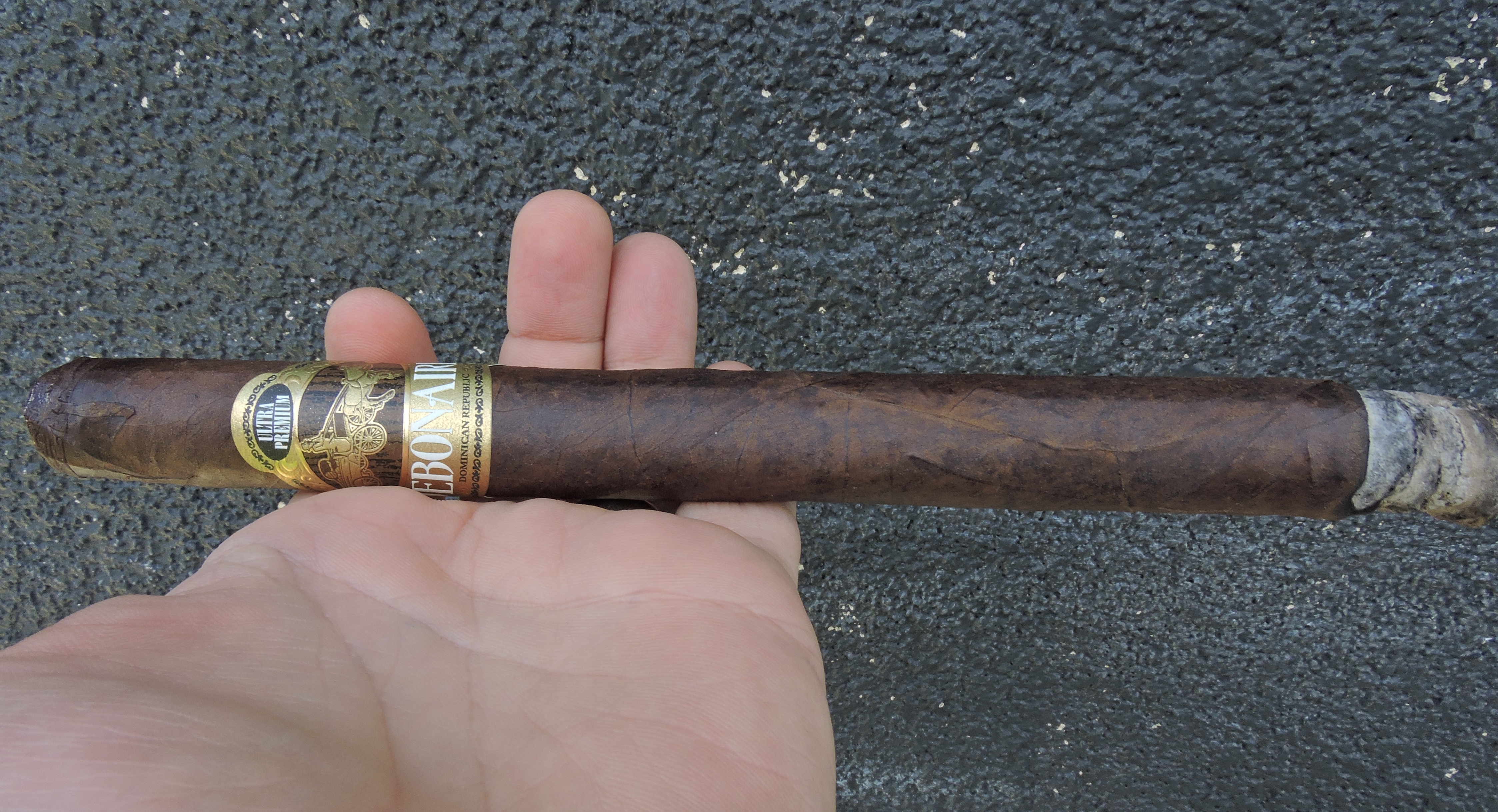 Burn of the Debonaire 33rd Maduro

With a cigar measuring 9 inches in length, sometimes a draw can be problem-some. The Debonaire 33rd Maduro drew flawlessly from start to finish. It was not too tight, nor too loose. It was never an issue getting the flavor from this cigar.

One thing that I noticed is that the 33rd Maduro was a little more dialed back compared to some of the other Debonaire Maduro vitolas I had smoked. I found that this cigar started out medium strength and medium-bodied. By the second half, I found both the strength and body progressed to medium to full for both attributes. I did find the strength and body continue to increase in the second half, but both attributes didn’t cross into full territory. In terms of strength versus body, I found this cigar maintained a nice balance between the two from start to finish.

There was a lot to like about this cigar. The flavors delivered were excellent, and they kept coming throughout the smoking experience. While the cigar lost some of its sweetness in the last third, it still delivered enough flavor to keep me satisfied. For a 3+ hour smoke, complexity is a key element and there were enough changeups and nuances to hold my interest for this duration. The construction was excellent as well.

“A’ size cigars are definitely a specialty size, and they can be hit or miss. This one is not only one of the best cigars I had in 2015, but it could be the best “A” size cigar I have ever smoked. I found this cigar to really shine and deliver one of the best Debonaire Cigars to date. It’s one I’d recommend to an experienced cigar enthusiast, but there is no reason why a novice couldn’t smoke it. We at Cigar Coop and Stogie Geeks define an Oasis level cigar as a cigar that one “Pursues relentlessly. Crawl Across a desert of broken glass to find and build a new humidor to store all the boxes”.  This cigar earns this high assessment rating and joins this exclusive club.

* Debonaire Cigar is a Sponsor of Cigar Coop and Stogie Geeks