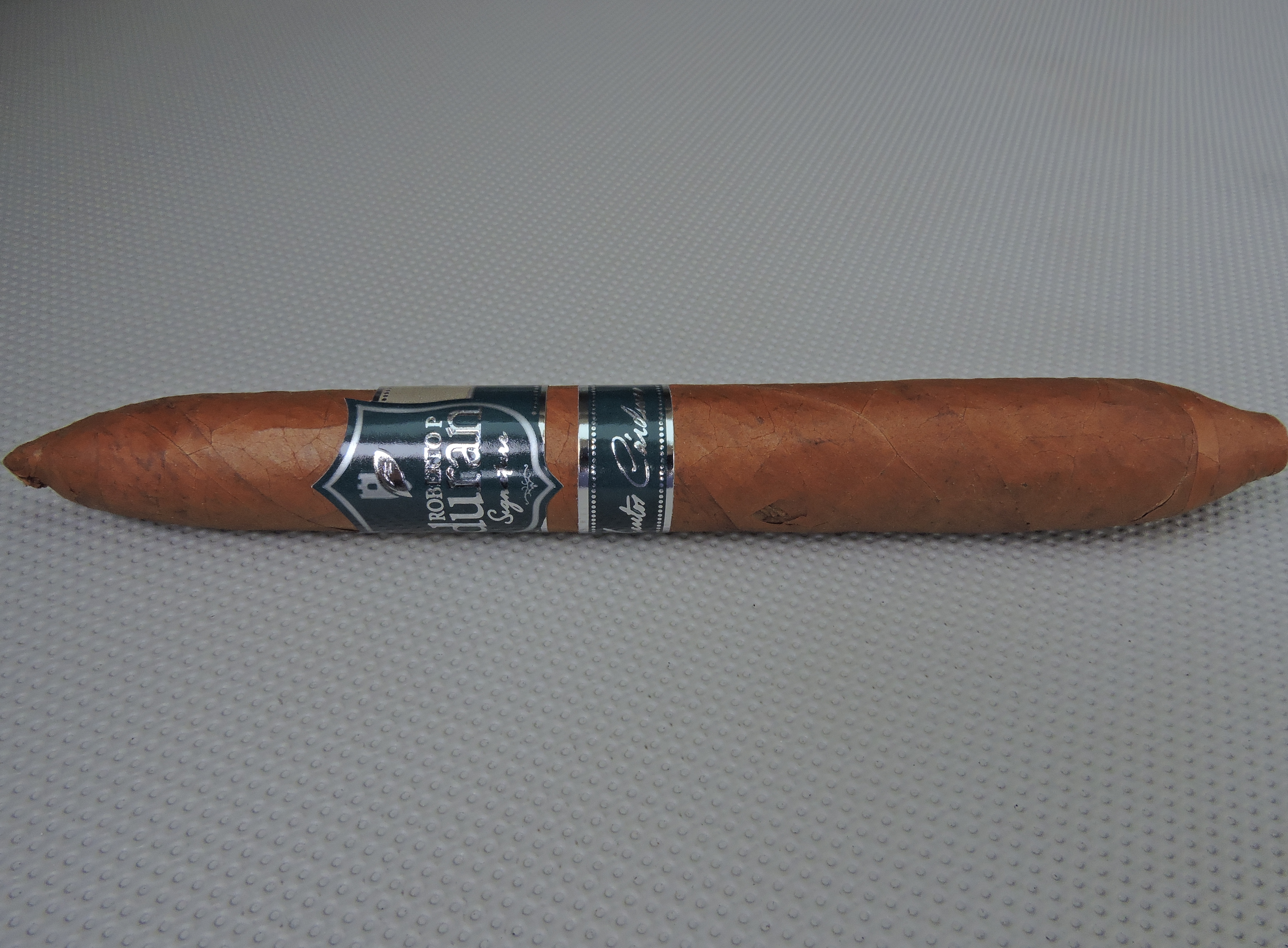 The Roberto P. Duran Signature Santo Cardenas Edition is an extremely limited production run. Only 3,000 cigars total were produced. In addition to Cardenas modifying the blend, he personally rolled all 3,000 cigars. The cigars were put into individual numbered coffins. Each coffin was also personally signed by Cardenas. The coffins are packed in five count boxes for a total of 600 boxes. 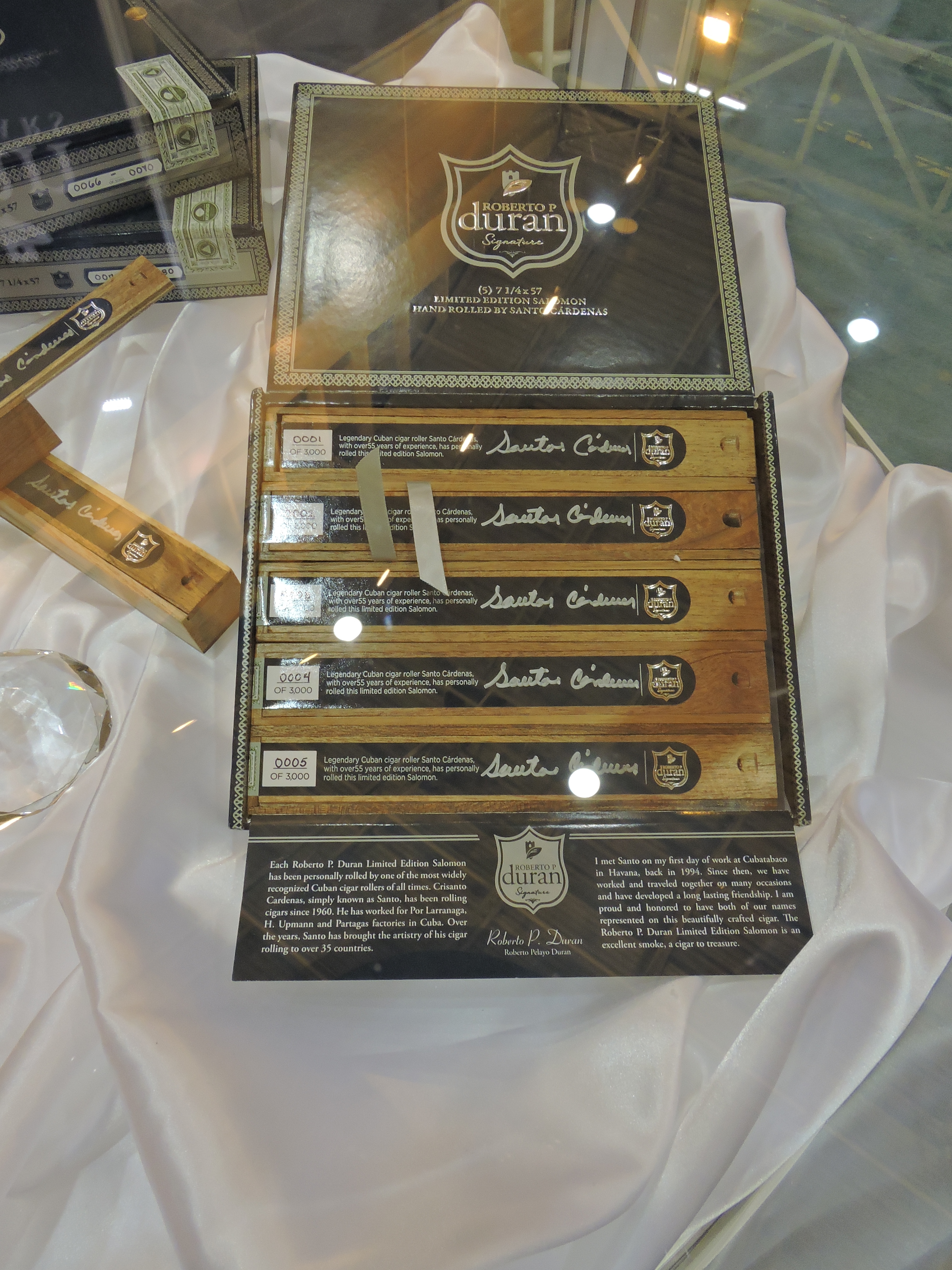 We now take a closer look at the Roberto P. Duran Signature Santo Cardenas Edition and see what this cigar brings to the table. This cigar assessment is based on a single cigar smoking experience.  In addition, the coffin packaging for this cigar was not provided.

We do know the Roberto P. Duran Signature Santo Cardenas Edition features the same Ecuadorian Habana Criollo wrapper as the rest of the line. Duran Cigars owns its own tobacco plantation in Ecuador and as a result the company sources its own wrapper. As for the other changes that Cardenas has made to the blend, they have not been disclosed.

The cigar is made at the company’s Nicatabaco factory located in Esteli, Nicaragua.

The Ecuadorian Criollo wrapper of the Roberto P. Duran Signature Santo Cardenas Edition has a rich cinnamon color with an orange tint. There was a moderate amount of oil on the surface of the wrapper. There were also some visible veins and some visible wrapper seams. The footer of the cigar has a nozzle-shaped open footer. The cigar tapers to a torpedo-shaped tip on the cap. The salomon is widest just before the nozzle footer.

There are two bands on the Roberto P. Duran Signature Santo Cardenas Edition. Since this line now has a new name, the primary band has slightly been changed to reflect this. The band features the Roberto P. Duran logo. This is highlighted on the front by a metallic blue shield design trimmed with silver. Toward the top of the shield is a silver castle window-like design with a chrome colored leaf draped over it. Toward the center of the shield is the text “ROBERTO P” in chrome font. Below that text is “duran” – also in a large chrome (lower case) font with the “d” protruding to the row above it. Finally on a third row is the text “Signature” in a small chrome cursive font. There are some silver adornments toward the bottom of the shield. To the left and right of the shield are two thick stripes – a white gold color on the upper half and and a metallic blue color on the lower half. A thin silver stripe separates the two thick stripes and there is chrome trim across the top and bottom of the band. Sitting on the left and right side of the shield on the white gold stripe are two silver and blue circular designs containing a crown.

Each cigar is also wrapped with a waxy parchment paper. It features Santo Cardenas’ signature in blue font in a wallpaper-like format. 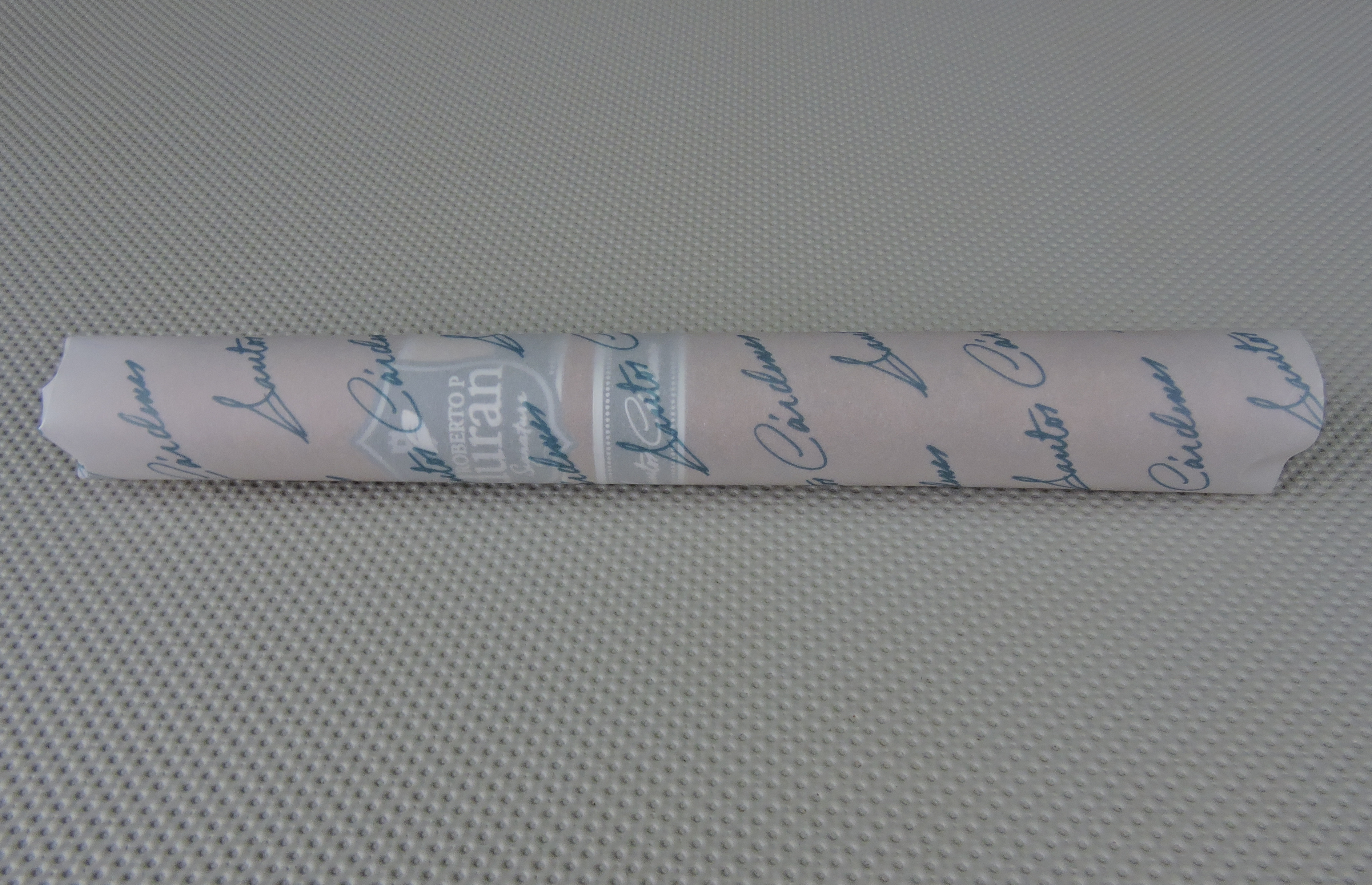 Given the Roberto P. Duran Signature Santo Cardenas Edition has a torpedo-shaped tip, I defaulted to a straight cut. As I have being doing with all of my figurados and salomons, I used my Credo Special T cutter with the 36 ring gauge hole to get an ideal cut for this perfecto. Once the tip was removed, I moved on to the pre-light draw phase. The dry draw provided a mix of apricot sweetness, generic wood, and cedar. Overall I considered this to be a very good pre-light draw. At this point I was ready to light up the Santo Cardenas salomon and see what the smoking experience would deliver.

The Roberto P. Duran Signature Santo Cardenas Edition kicked off with notes of apricot, wood, and pepper. As the salomon burned through the nozzle tip, the apricot notes became primary with the wood and pepper notes secondary. The retro-hale produced a combination of both cedar with a touch of the apricot sweetness.

As the Santo Cardenas Edition reached the main base, notes of natural tobacco joined the apricot sweetness. Meanwhile the wood and pepper remained secondary and there was a slight cream note in the distance background.

During the second third, the natural tobacco notes took control. The apricot moved into the background joining the wood and pepper notes. The wood notes took on some cedar-like characteristics in terms of having an added dimension of sweetness and spice. The cream notes were replaced by the nut flavor.

By the last third of the Santo Cardenas Edition, the cedar notes joined the natural tobacco in the forefront. The apricot, nut, and pepper remained secondary, but occasionally the apricot notes were a little more prominent. This is the way the flavor profile came to a close. The resulting nub was outstanding – firm to the touch and cool in temperature.

Overall the Roberto P. Duran Signature Santo Cardenas Edition was a very well constructed salomon and this reflected nicely in the burn and draw. The burn was low maintenance for a salomon. It didn’t require much in the way of touch-ups to keep the burn path and burn line straight. The resulting ash was a salt and pepper color. The ash itself wasn’t overly firm, but it wasn’t a loose and flaky one either. The burn temperature was ideal. I did find this to be a slow burning cigar, but this just resulted in a slower smoking time and didn’t create any adverse effects. 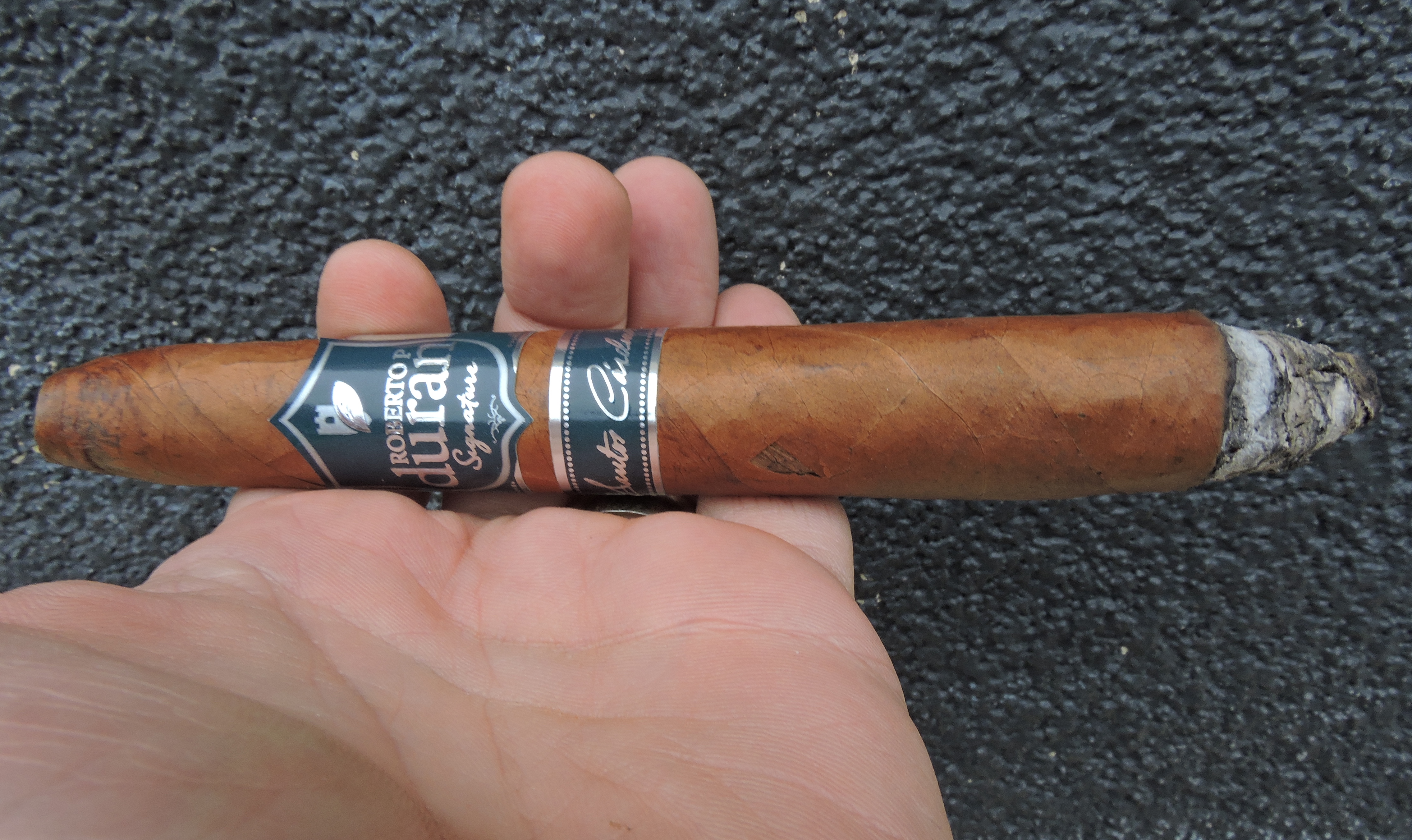 The draw of the Santo Cardenas Edition performed quite well. It had a touch of resistance – which is something I like. In the end, I found the draw to also be low maintenance on this cigar.

From both a strength and body perspective, I found the Santo Cardenas Edition to be in the same wheelhouse as the rest of the Roberto P. Duran Signature line. This was a medium strength, and medium-bodied cigar from start to finish. Both attributes did increase slightly along the way, but in the end both attributes still stayed in the medium range. In terms of strength versus body, I found both attributes balanced each other nicely.

Overall the Roberto P. Duran Signature Santo Cardenas Edition provided s a great smoking experience. I really loved the flavors produced by the tweaks made by Cardenas on this blend.  In addition, this cigar adds a nice amount of complexity and has excellent construction. Between the blend changes and the salomon size, this is a cigar that had a different profile than the original Roberto P. Duran Signature.

The Santo Cardenas Edition is not going to be an inexpensive cigar as it retails for $25.00 SRP.  However, this makes an excellent special occasion cigar. It’s a cigar that I could easily give to either an experienced or novice cigar enthusiast to enjoy. As for myself, this is a cigar I would smoke again. While it does have a higher price point, it does come in 5 count boxes and based on that, it makes this a box worthy selection in my book.

* Duran Cigars is a sponsor of Cigar Coop / Stogie Geeks