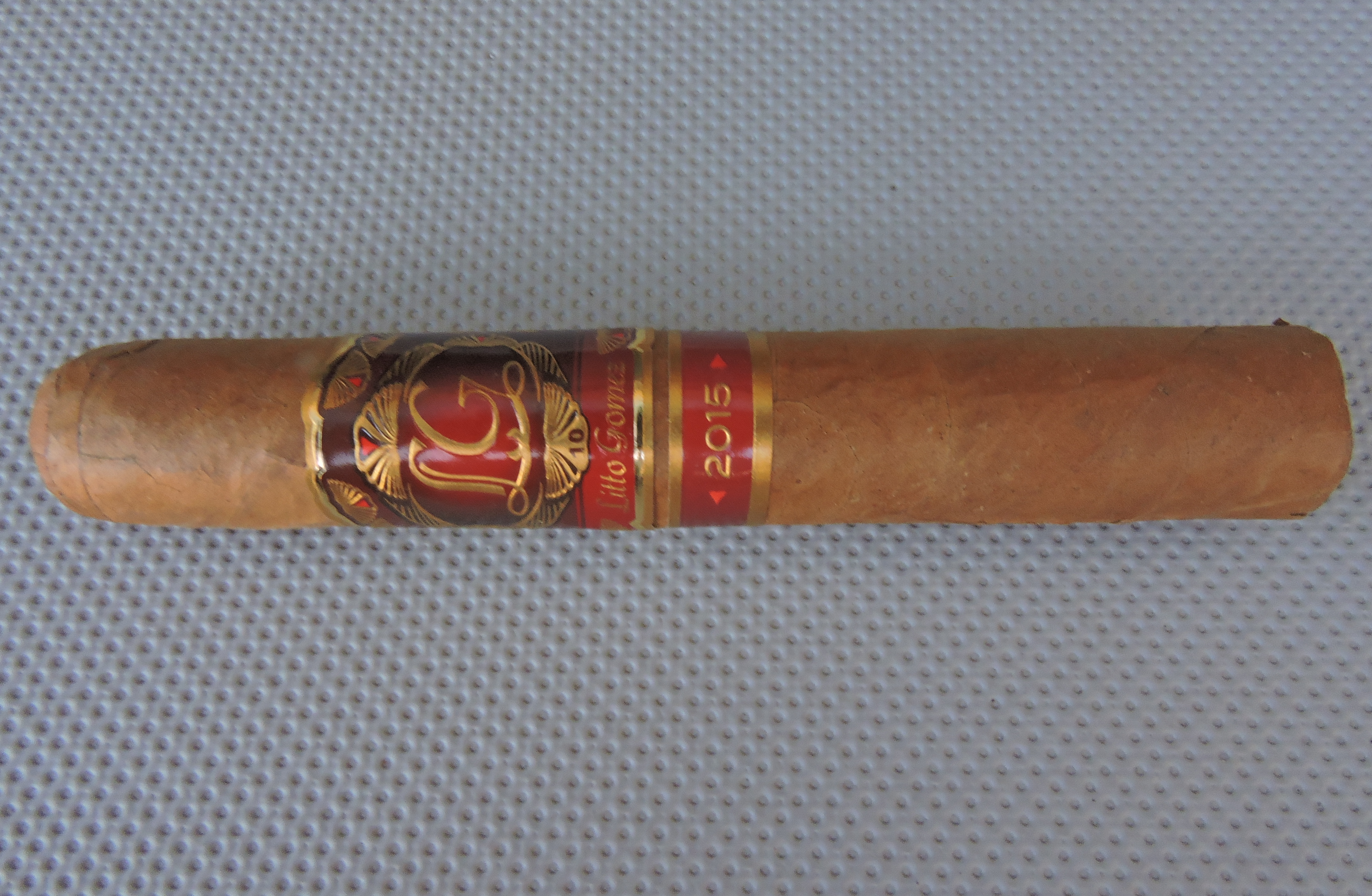 The Litto Gomez Diez LG 2015 is the latest installment in La Flor Dominicana’s Litto Gomez Diez line. The cigar takes its name from La Flor Dominicana founder Litto Gomez. The cigar was introduced in 2004 to commemorate Gomez’s ten years (thus the “Diez”) in the cigar industry. Originally launched back in 2014, the line features all Dominican tobaccos grown at the company’s La Canela farms. In 2008, a change was made to the line to incorporate the tobaccos from a single year vintage. Since its inception, LG line has been released on an average of every two years. Today we take a closer look at the Litto Gomez Diez LG 2015 edition in the Cubano (Robusto) offering. Overall, I found this to be an excellent release, and one that might fly under the radar in terms of 2015 cigar releases.

While specifics of the vintage were not mentioned for the 2015 edition, typically the LG line has drawn from tobaccos that are four years old from the date of the LG edition. By using the different vintages, each cigar is unique from the previous edition.

There is also a limited edition small batch off-shoot of this line known as the Litto Gomez Diez Small Batch Series that has been released in one to three year intervals. The Small Batch blend has varied in blend and size (although the vitolas tend to be larger) from year to year. This blend also differs from the LG blend.

Without further ado, let’s take a closer look at the Litto Gomez Diez LG 2015 and see what this cigar brings to the table.

Given the tobaccos come from Gomez’s La Canela farms, this makes the Litto Gomez Diez LG 2015 a Dominican puro. The cigar is made at the company’s Tabacalera La Flor in the Dominican Republic.

There were five vitolas that were released with the Litto Gomez Diez LG 2015. Each of these sizes are packaged in 24 count boxes.

The band of the LG 2015 is actually a slight variation of what has been seen in the past. The band features a red background that has a gradiant effect from the center where it gets darker on the edges. The center of the band has a large scripted gold colored “LG” surrounded by gold adornments. Below the text on is a small dark colored “10” on one of the adornments. The lower part of the band features the text “Litto Gomez” in a gold cursive-like font. There are gold adornments (with a little red mixed in) across the top and bottom of the band.

For the first time the Litto Gomez Diez LG series features a secondary band. This is also red with a radiant effect from the center where it gets darker toward the edge. There is a gold “2015” at the center of the band with two small bright red adornments on each side.

Prior to lighting the Litto Gomez Diez LG 2015 Cubano, I went with my usual choice of a straight cut. After removing the cap, I commenced with the pre-light draw. The dry draw provided a mix natural tobacco, some sugar cane, and a touch of pepper. Overall I considered this to be a very good pre-light draw. At this point I was ready to light up the LG 2015 Cubano and see what the cigar experience would have in store.

The start of the Litto Gomez Diez LG 2015 Cubano picked up where the pre-light draw left off. The cigar delivered a combination of natural tobacco, sugar cane, and red pepper. As the cigar moved through the first third, the natural tobacco notes took over as the primary note. The red pepper receded into the background. The sugar cane notes were also in the background, but from time to time moved into the forefront. Later in the first third, I also detected some grass notes. Meanwhile on the retro-hale, I was also detecting the red pepper notes.

During the second third the pepper and grass notes started to increase in intensity. The sugar cane notes remained a bit further back in the background. The big change that happened during this stage as the natural tobacco notes took on a cinnamon quality and still very much remained a primary flavor.

By the last third of the LG 2015 Cubano the grass and pepper notes had moved into the forefront.  The natural tobacco / cinnamon notes were now in the background. By this time the sugar cane notes had dissipated. There was a little bit of harshness at toward the end of the cigar. This is the way the flavor profile came to a close. The resulting nub was firm to the touch and cool in temperature.

The burn of the Litto Gomez Diez LG 2015 Cubano scored very nicely. The burn path remained straight from start to finish. The burn line had some jaggedness, but it wasn’t uneven. I found this cigar required some touch-ups, but the amount needed was not excessive. The resulting ash was a light gray color. This wasn’t an overly tight ash, but it wasn’t a loose one either. As for the burn rate and burn temperature, both were ideal . 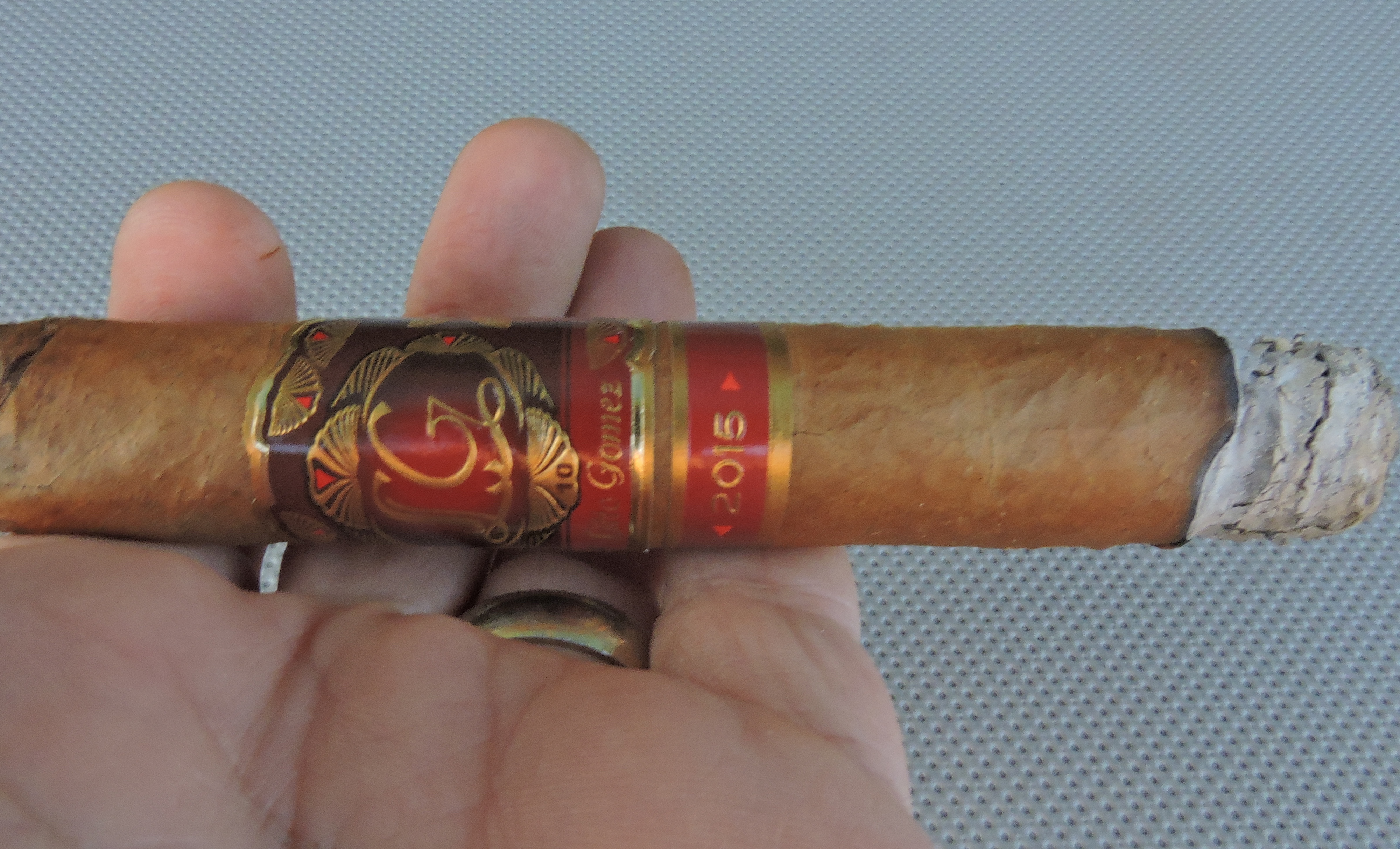 There was a slight resistance to the draw – which is something I like. At the same time, I found this cigar produced quite a bit of smoke.

Right out of the gate, the Litto Gomez Diez LG 2015 Cubano started out with medium to full strength. The strength seemed to hold at this level, but just around the start of the final third, there was a spike and the strength moved to the full level. Meanwhile, the flavors of the LG 2015 Cubano started out medium to full-bodied. The depth of the flavors did increase and by the second half, the LG 2015 Cubano was in full-bodied territory. As for strength versus body, I found both remained relatively close. It seemed the body had the edge early, but in the later stages the strength had the edge.

2015 was a busy year for La Flor Dominicana. Releases such as the new La Nox and the return of the La Flor Coronado have definitely given the company a lot of attention. The Litto Gomez LG 2015 Cubano should not be overlooked with the company’s 2015 releases. This cigar delivers both the flavor and the power (especially in the last third) that many LFD fans have come to expect. While this is a well-aged, ready to smoke cigar now, my gut tells me this will respond very favorably to aging.  Given this cigar ramps up with a lot of strength toward the end, I would steer a more experienced cigar enthusiast to this cigar. As for myself, this is a vintage of the Litto Gomez LG series I want to keep around. It’s easily worth a box split in my book.