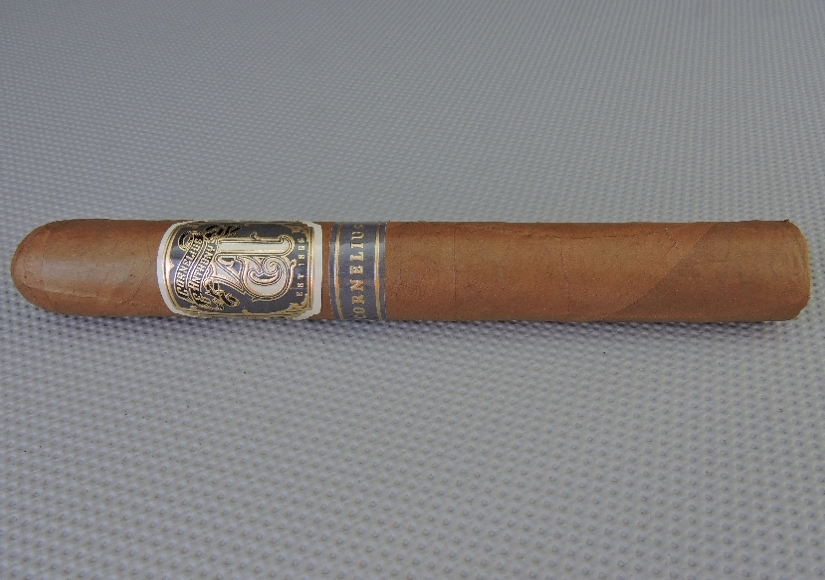 burn of the Cornelius Toro by Cornelius & Anthony

The Cornelius is one of two new cigars launched in 2016 by the brand Cornelius & Anthony (C & A). Cornelius & Anthony is the premium cigar division S & M Brands. S & M Brands is owned by the Bailey family and run by Steven Bailey. The family has over 150 years in the tobacco industry. The name Cornelius pays homage to Steven Bailey’s great grandfather, Cornelius Bailey. It was Cornelius Bailey who ran the family’s tobacco business when it was established back in 1866. The Cornelius line is positioned as a more premium offering in the C & A portfolio. Recently I’ve had an opportunity to smoke the Cornelius cigar in the Toro offering. Overall I found this to be a solid release and one worthy of having in your humidor.

In addition to Cornelius, C & A has released another line this year, the Daddy Mac – a cigar made at Erik Espinosa’s La Zona factory. Prior to 2016, there have been some other projects worked on by C & A, Avant Garde and Meridian that both had soft-launch releases.

Without further ado, let’s break down the Cornelius Toro and see what this cigar brings to the table.

The Cornelius features Ecuadorian tobaccos for the wrapper and binder and a combination of Dominican and Nicaraguan filler.

Cornelius is available in three sizes – each in 20 count boxes.

The Ecuadorian wrapper to the Cornelius Toro has a very elegant look to it. There is some oil on the surface of the wrapper. While there are some visible veins and visible wrapper seams, I found this wrapper to be on the smooth side.

There are two bands to the Cornelius Toro. The primary band is gray in color with white trim. Prominently displayed on the front of the band is the large white and gold interlocking “CA” logo. Above the logo are two gray ribbon designs trimmed in gold. One ribbon has the text “CORNELIUS” and the other has the text “& ANTHONY” – both in gold font. Below the “CA” logo is the text “EST 1866” in small gold font. There are also some gold adornments on the front of the band. On both the left and right side of the band are a series of white, gold, and gray stripe patterns.

The secondary band sits just below the primary one. It is gray in color with gold pinstripes near the top and bottom. In between the pinstripes is the text “CORNELIUS” in gold font.

Prior to lighting up the Cornelius Toro, I went with my usual selection of a straight cut to remove the cap. Once the cap was removed, I moved on to the pre-light draw. The cold draw delivered a mix of sweet natural tobacco and a slight amount of black pepper. Overall I found the pre-light draw of this cigar to be satisfactory. At this point I was ready to light up the Cornelius Toro and await what the smoking phase would have in store.

During the first third, the wood and natural tobacco notes remained in the forefront. In addition to the classic wood notes, I also detected some cedar notes that added an additional layer of sweetness and some spice to the flavor profile. During this stage of the Cornelius Toro, I found the sweetness to definitely dominate the profile.

As the Cornelius Toro moved through the second third, some of the sweetness started to dial back. I found the wood notes became the primary note with the natural tobacco and cedar still providing a nice balance of sweetness. Toward the second half, I found an increase in the spice from both the pepper and cedar components. I also now detected some of the black pepper on the retro-hale.

By the last third I found the sweetness had receded into the background. The pepper and the cedar were now pretty much on par with the wood notes. While there was more of a spice component, it never assaulted the palate. This is the way the Cornelius Toro came to a close. The resulting nub was firm to the touch and cool in temperature.

In terms of construction, the Cornelius Toro is a well-constructed cigar and this reflected very nicely on the burn and draw. The burn took a straight path from start to finish. While there was a slight curvature on the burn line, this was a cigar never in danger of tunneling or canoeing. The salt and pepper colored ash was on the firm side. I found this ash came off the Cornelius Toro in nice clean chunks. As for the burn rate and burn temperature, both were ideal. 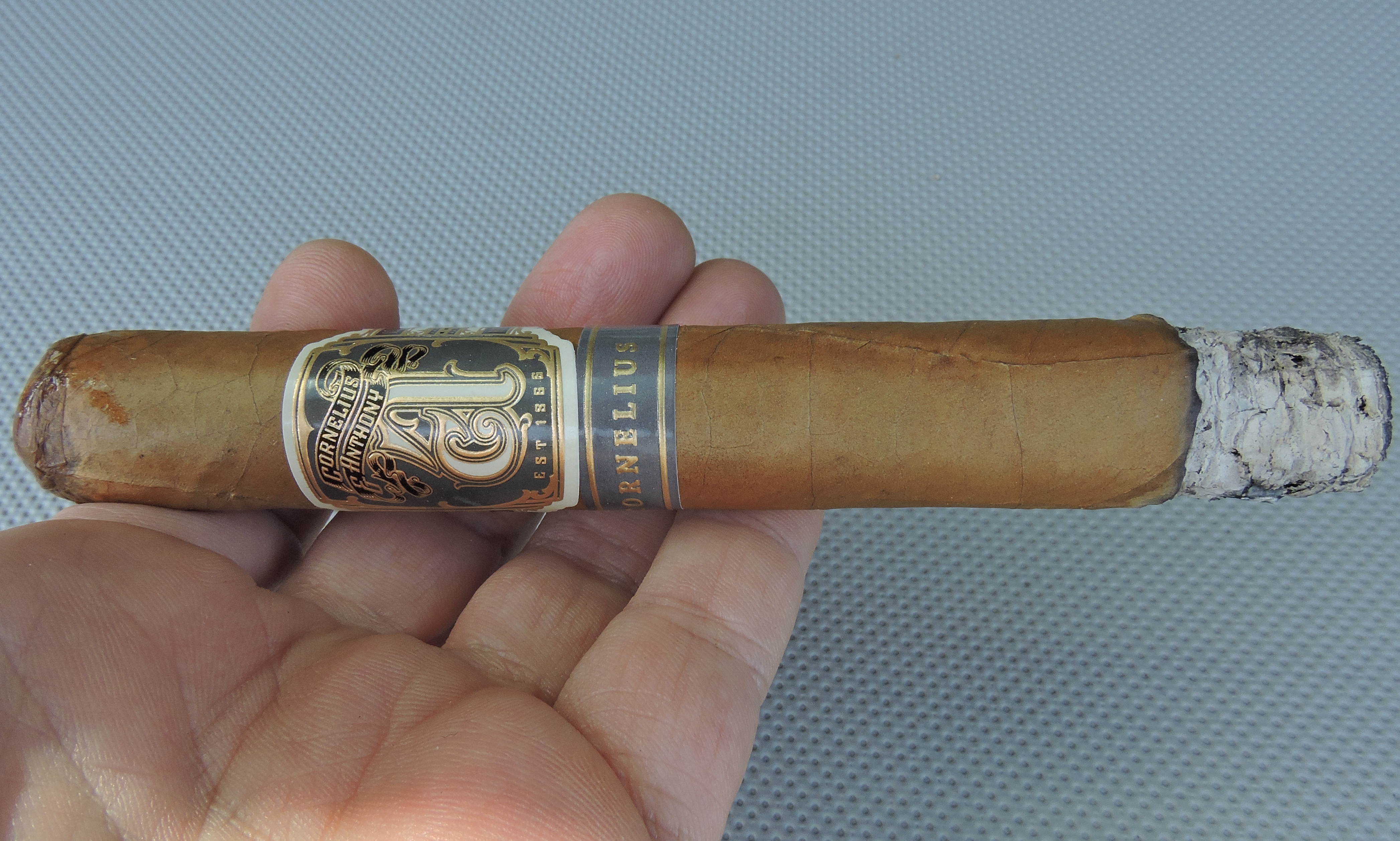 Burn of the Cornelius Toro by Cornelius & Anthony

As for the draw, it performed quite well. It was not too tight, nor too loose. Overall this was a low maintenance cigar to derive flavors from.

In terms of strength, I found the Cornelius Toro to be medium – falling right in the middle of the spectrum. The strength pretty much remained constant from start to finish. Meanwhile the body of the Cornelius Toro started out on the upper end of medium-bodied. By the last third, I did find the body progressed into the medium to full range of the spectrum. When it came to strength versus body, I found the body had the edge throughout the smoking experience.

There is one word that comes to mind with this cigar – and that is “classic”. This cigar delivers a very classic flavor profile – and it’s going to do it very well. This cigar brings a nice mix of sweetness and spice. While there is a variance between the two, the sweetness and spice components never got too overwhelming – something that I like.

This was an enjoyable cigar right out of the gate, and I do believe there is huge upside as my gut tells me this cigar is going to be one to respond nicely to some long-termer aging. This is a little pricier cigar, but it’s a high quality smoke. It’s a cigar I can recommend to any cigar enthusiast, any time of the day. As for myself, this is easily worthy of a fiver.