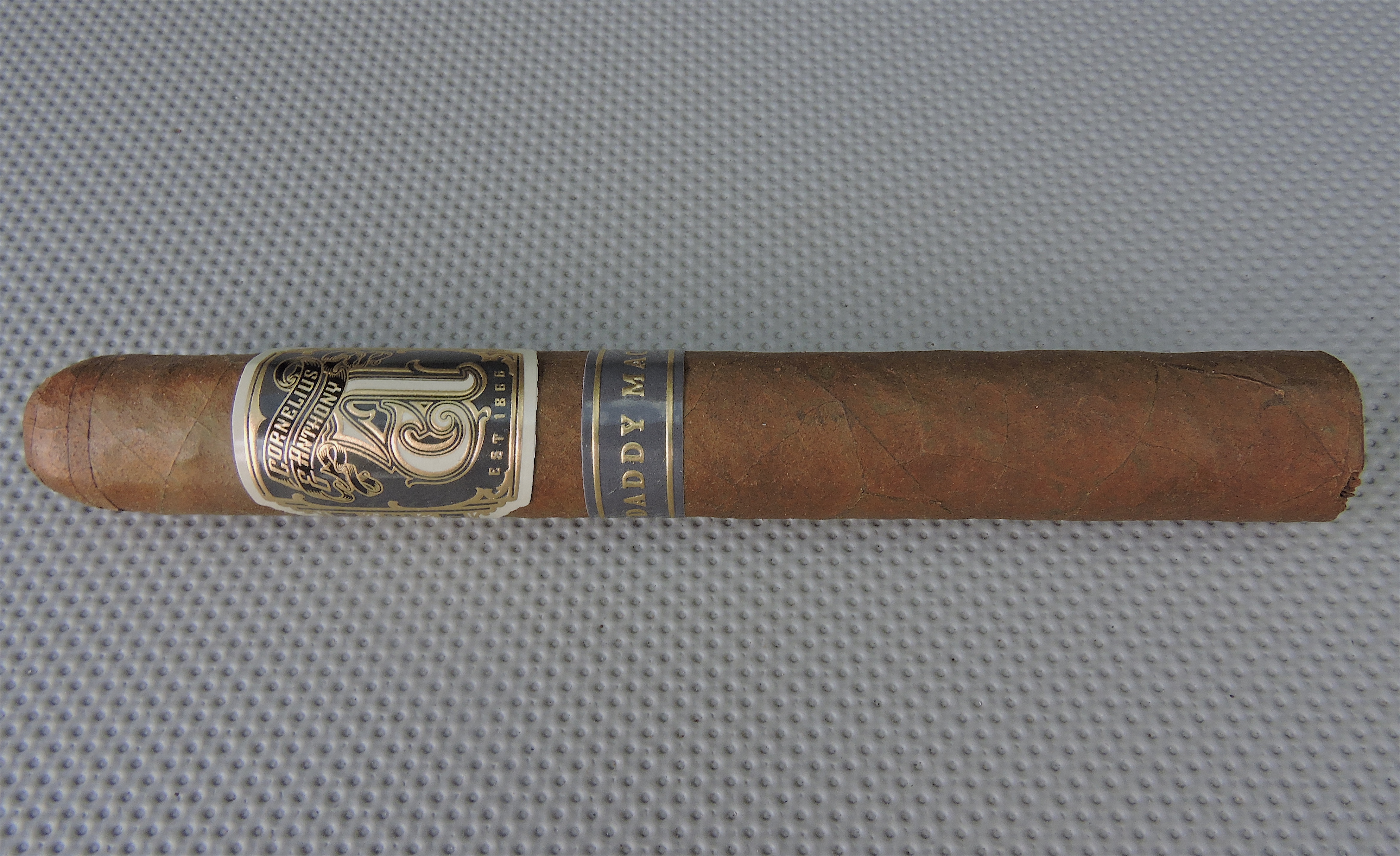 One thing that the Daddy Mac utilizes is a Brazilian wrapper. La Zona hasn’t done a lot of releases with wrappers sourced from Brazil, however the highly successful Espinosa Laranja Reserva also uses a wrapper sourced from Brazil. Given the success of working with Brazilian wrapper on the Laranja Reserva, it made smoking the Daddy Mac that much more intriguing.

In addition to Daddy Mac, Cornelius & Anthony has released another line this year, the Cornelius – a cigar made at the El Titan de Bronze factory located in Miami, Florida. Prior to 2016, there have been some other projects worked on by Cornelius & Anthony, Avant Garde and Meridian – both of which had soft-launch releases.

Without further do, let’s break down the Cornelius & Anthony Daddy Mac Corona Gorda and see what this cigar brings to the table.

In addition to using a Brazilian wrapper, the Daddy Mac features a binder from Ecuador and fillers from Nicaragua.

One thing that stands out is that this is a darker Brazilian wrapper than is used on the Espinosa Laranja. The wrapper has the look of dark wood. Upon closer examination, there is some subtle darker marbling that can be seen on the wrapper. The surface of the wrapper has a light coating of oil. Any visible veins and wrapper seams are on the thin side.

There are two bands to the Daddy Mac. The primary band is the same one found on the Cornelius line. This is a band that is gray in color with white trim. Prominently displayed on the front of the band is the large white and gold interlocking “CA” logo. Above the logo are two gray ribbon designs trimmed in gold. One ribbon has the text “CORNELIUS” and the other has the text “& ANTHONY” – both in gold font. Below the “CA” logo is the text “EST 1866” in small gold font. There are also some gold adornments on the front of the band. On both the left and right side of the band are a series of white, gold, and gray stripe patterns.

The secondary band sits just below the primary one. It is gray in color with gold pinstripes near the top and bottom. In between the pinstripes is the text “DADDY MAC” in gold font.

Prior to lighting up the Daddy Mac Corona Gorda, I went with my usual choice of a straight cut to remove the cap. Once the cap was clipped, I moved on to the pre-light draw. The dry draw provided a mix of chocolate, cream, and some orange citrus. Overall, I considered the pre-light draw of the Daddy Mac Corona Gorda to be excellent. At this point I was ready to light up my cigar and see what the smoking phase would have in store.

The Daddy Mac Corona Gorda stated out with notes of chocolate, dried fruit, wood, and red pepper. The chocolate notes quickly developed a creamy component and emerged as the primary flavor.The dried fruit, wood and red pepper subsided into the background. On the retro-hale, the red pepper remained quite prominent and would stay that way throughout the smoking experience

Around the midway point, the chocolate notes morphed to more of a natural tobacco flavor. The dried fruit notes were also still very much present in the forefront. By this time, the red pepper increased and the wood notes dissipated.

By the last third, the red pepper joined the natural tobacco notes in the forefront. The dried fruit now took on more of a complementary role. This is the way the cigar experience came to a close. The resulting nub was firm to the touch and cool in temperature.

The cigars coming out of La Zona continue to have top-notch construction and the Daddy Mac Corona Gorda is no exception. I found the burn path of this cigar remained straight from start to finish. The Daddy Mac Corona Gorda was never in any danger of tunneling or canoeing. There was a slight amount of jaggedness on the burn line, but this didn’t warrant any additional touch-ups above the normal amount. Meanwhile the resulting ash was firm with a near white color to it. As for the burn rate and burn temperature, both were ideal. 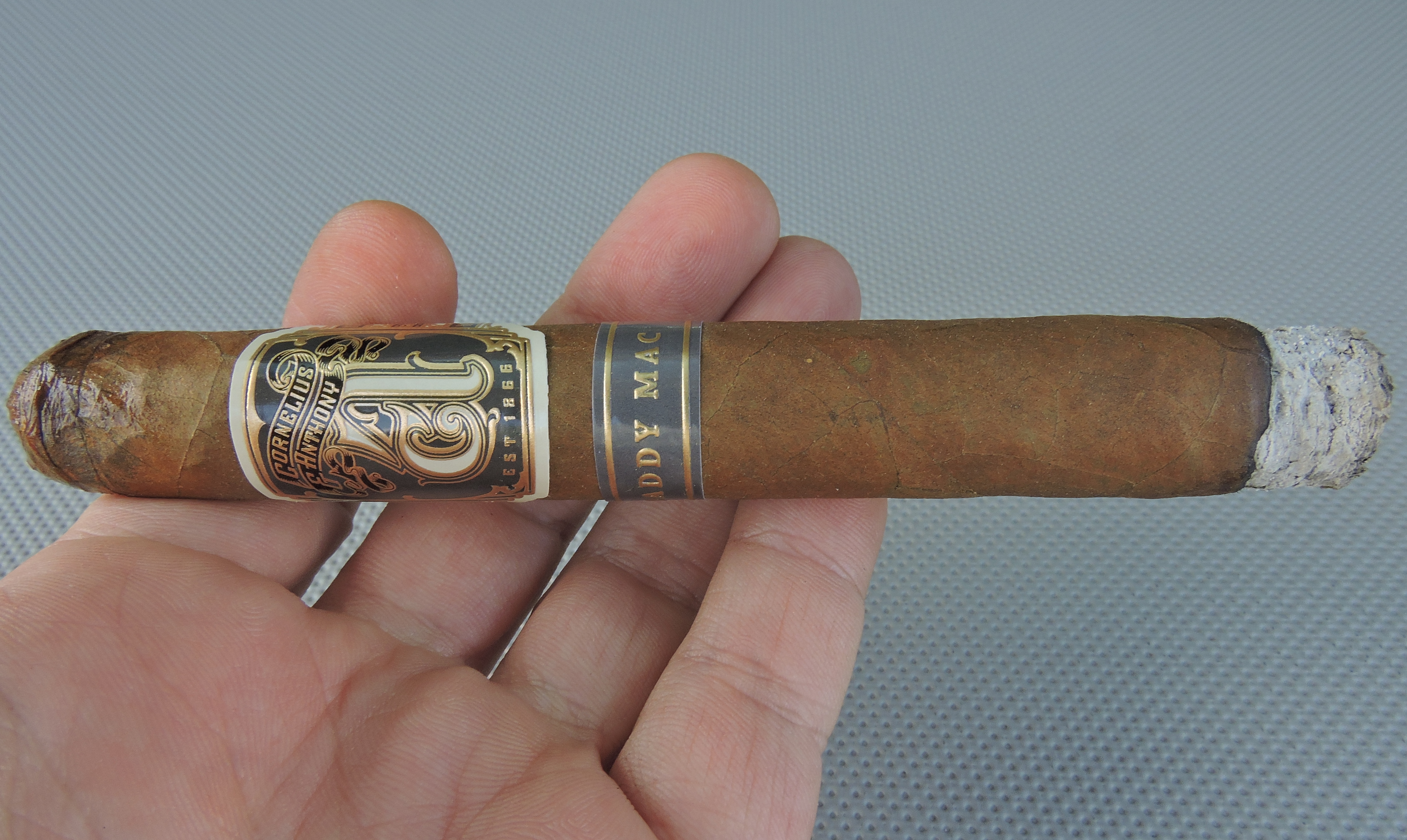 The draw of the Daddy Mac Corona performed quite well. This was a draw that was not too tight, and not too loose. This was also a cigar the produced an ample amount of smoke.

Strength-wise, the Daddy Mac started out medium. For the most part the strength remained in the medium range, but there was a slight spike in the last third that progressed the strength level to medium to full. At the same time, I found this is a cigar that delivered a lot of weight on the palate – especially when the retro-hale was factored in. I assessed the Daddy Mac as being a full-bodied cigar from start to finish.

Overall I found the Cornelius & Anthony Daddy Mac Corona Gorda cigar to deliver a very good experience. This is a cigar that will deliver rich, robust flavors through the smoking experience. Over the past few years, La Zona has expanded its operation to make cigars for many other brands. What has been most impressive is how they have been able to keep the cigars unique and not compete with other cigars in the La Zona family. The Cornelius & Anthony Daddy Mac is an example of one such cigar. This is a cigar I would recommend to a more experienced cigar enthusiast, but if a novice is looking to graduate to full-bodied, this is the perfect cigar to do so. As for myself, this is an enjoyable cigar and I look forward to talking about some of the other sizes. It’s certainly worthy of a box split.