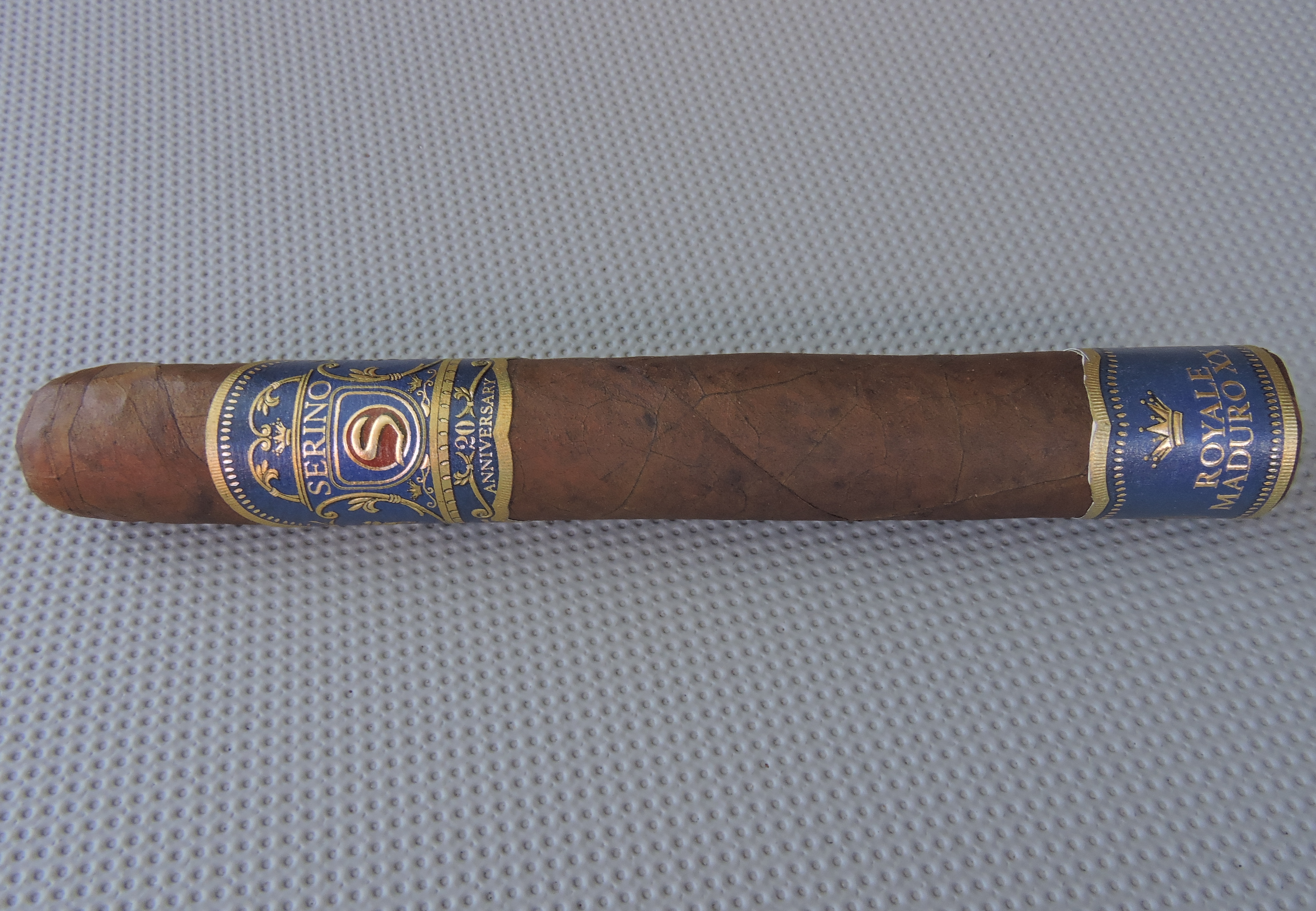 The Serino Royale Maduro XX is one of four blends by Serino Cigar Company. Serino Cigar Company is run by industry veteran Tony Serino. For over two decades, Serino has worked in the industry importing and selling premium bundle cigars. With the Serino Royale line, Serino unveils his own super premium line. To produce this line, Serino has teamed up with Omar Gonzalez Aleman of La Corona Cigars S.A.. Gonzalez is the former head director of the La Corona Factory in Havana, maker of many well known Cuban brands such as Romeo y Julieta, Hoyo de Monterrey, Cuaba, Por Larranaga, Saint Luis Rey, San Cristobal de Habana and some Montecristos. To U.S. cigar enthusiast, most recently Gonzalez is best known for his involvement of brands HR, Soneros, and Cubanacan. Today we take a closer look at the Serino Royale Maduro XX in the Sublime size. Over the past couple of months, I’ve have had an opportunity to sample several offerings made by Serino Cigar Company, and each have been excellent. The Serino Royale Maduro XX is no exception. 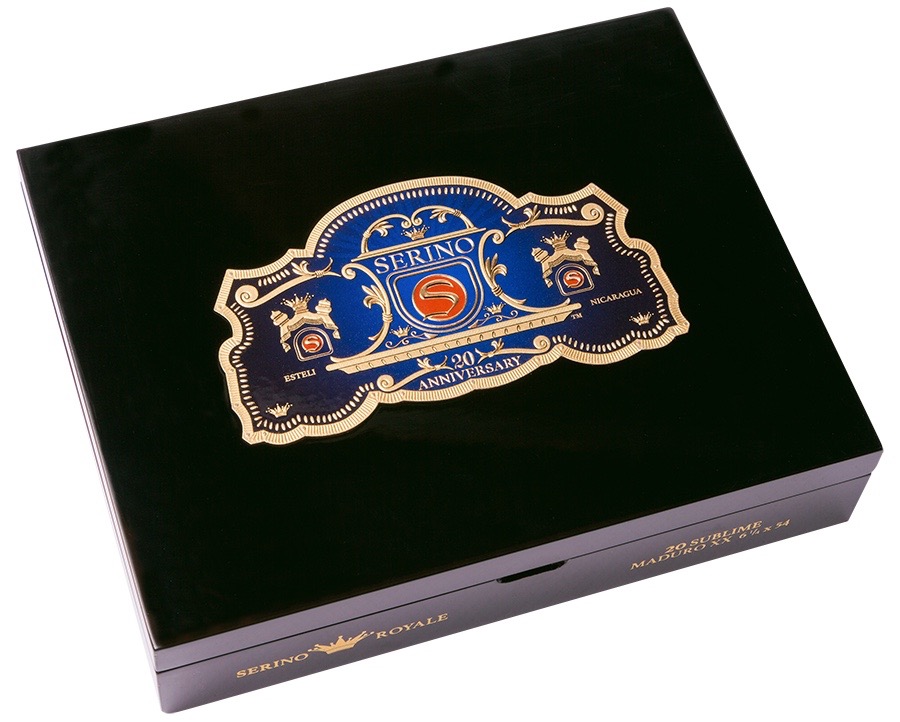 Without further ado, let’s break down the Serino Royale Maduro XX Sublime and see what that cigar brings to the table.

Ecuadorian Habano Oscuro wrappers are something that seem to be a staple out of Gonzalez’s La Corona factory. The Serino Royale Maduro XX is no exception.

The Serino Royale Maduro XX is available in four sizes. Each are packaged in 20 count boxes. 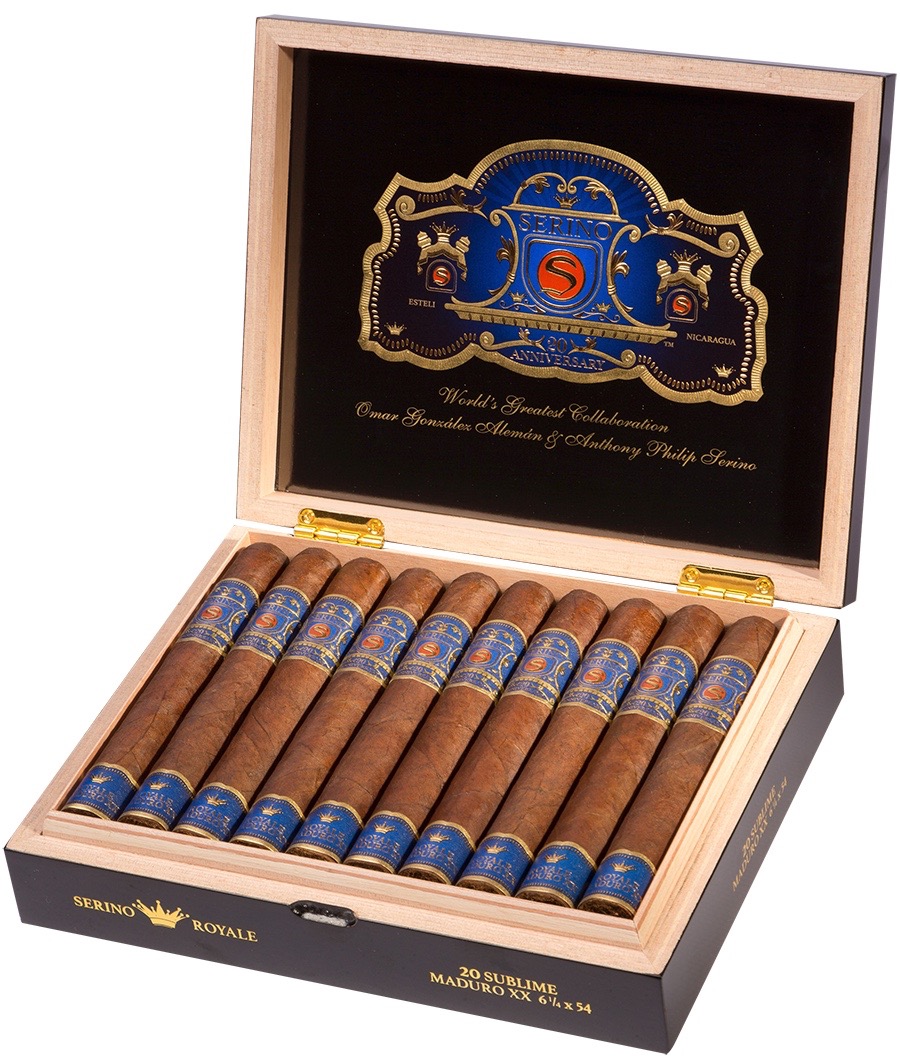 The Ecuadorian Habano Oscuro wrapper of the Serino Royale Maduro XX Sublime has a coffee bean color with some darker marbling. Depending on how the light shines on it, the wrapper may give off a colorado red tint to it. There were some light oils present on the wrapper. While there were some visible wrapper seams and visible veins, I found the surface to the wrapper to be on the smooth side. The cigar itself had a nice pack to it and has a bit of weight to it when held in the hand.

There are two bands on the Serino Royale Maduro. The primary band is mostly blue with gold font. At the center of the band is a “S” on a red circle sitting on a blue shield. Above the shield is the text “SERINO”. To the left and right is a small version of the “S” logo on a red circle sitting on an inverted blue shield. The lower part of the band has the text “20th Anniversary” in gold font. The remainder of the band has several gold adornments. The band itself is finished in gold trim.

The secondary band is also blue in color with gold trim. The text “ROYALE MADURO XX” is at the center of the band in gold font. A gold crown sits above that text. To the left and right is a small version of the “S” logo on a red circle sitting on an inverted blue shield.

As I do with most cigars, I opted to go with a straight cut to remove the cap from my Serino Royale Maduro XX Sublime. Once the cap was removed, I proceeded with the pre-light draw. The dry draw was quite flavorful as I detected notes of chocolate, maduro sweetness (which I consider a cross of natural tobacco and cherry), and a slight amount of cedar sweet-spice. Overall I considered the pre-light draw of this cigar to be excellent. At this point I was ready to fire up my Serino Royale Maduro XX Sublime and see what the cigar would have in store.

The Serino Royale Maduro XX Sublime started out with a mix of black and white pepper, cocoa, cedar, and a touch of citrus. The cocoa and cedar notes became primary early on while the secondary notes became secondary. The citrus notes quickly dissipated. Meanwhile the retro-hale produced a mix of pepper and cedar.

By the middle of the first third of the Serino Royale Maduro XX Sublime, I found the cedar notes to remain grounded in the forefront. The cocoa notes floated in and out of the forefront. I also found the chocolate notes had a nutty undertone to it. The pepper remained in the background on the tongue, but had much more of an increased presence on the retro-hale as the cigar experience continued to progress.

During the second third, the chocolate note changed to more of a coffee bean flavor. Like the chocolate note, it continued to surface in the forefront. By the midway point, this flavor was on par with the cedar notes. Meanwhile there were still notes of pepper and nut in the more distant background.

The last third of the Serino Royala XX Maduro Sublime produced mostly coffee notes. There was still some cedar and pepper present. I found there also was a touch of natural maduro sweetness. This is the way the Sublime finished up. The end of the cigar was quite flavorful with no harshness.

Overall the burn scored quite well on the Serino Royale Maduro XX Sublime. The cigar’s burn line had a slight curviness along the way, but this was a burn never in danger of getting off track. I also found this was a cigar that did not require an excessive amount of touch-ups. The resulting ash was on the firm side with a nice salt and pepper color to it. As for the burn rate and burn temperature, both were ideal. 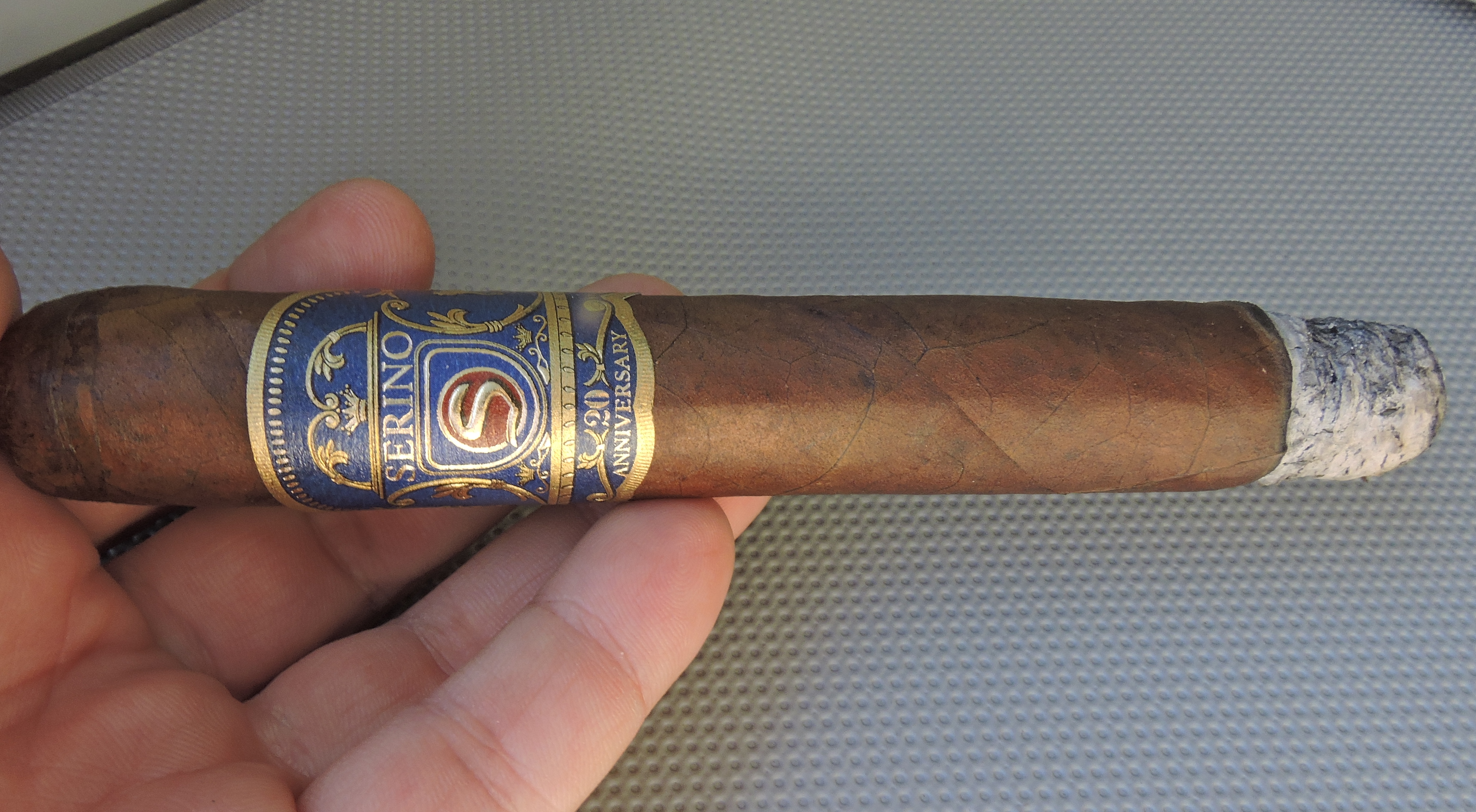 Overall I found the draw to the Serino Royale Maduro XX Sublime to perform quite well. It was not too tight, nor too loose. I found this to be an enjoyable cigar from start to finish.

The Serino Royale Maduro XX has been positioned as the fullest cigar in the four blend Serino Royale line – and I agree with statement. At the same time, this is not a cigar that will overpower you with nicotine, nor overpower you with a lot of weight on the palate. As for the Sublime, I assessed this cigar as starting out with medium strength. The strength built up along the way and by the last third, it was in the medium to full range. When comparing this to the other maduro offering, the Serino Royale Maduro, I found the Maduro XX to have a slight bit more in the way of strength.

Body-wise, I found the Serino Royale Maduro XX Sublime to have more weight on the palate. This cigar started out medium-bodied. By the middle of the first third, the body moved into medium to full territory. The body gradually increased throughout the smoking experience. Toward the end, the Sublime had inched closer to full-bodied territory, but didn’t quite cross the threshold.

In terms of strength versus body for the Serino Royale Maduro XX Sublime, I gave the body the edge throughout the smoking experience.

This is the third of the four cigars Serino Royale blends I have assessed. With each of the cigars I have smoked, I have had an excellent overall smoking experience. The Serino Royale XX Sublime delivered an excellent cigar. Sometimes when a cigar is advertised as fuller and/or stronger, I find complexity can be sacrificed. No such case with the Serino Royale XX Sublime as definitely delivered on complexity. In addition, this cigar had some excellent flavor and that’s a big plus. Overall this is a cigar that I’d probably recommend more to an experienced cigar enthusiast, but I would not discourage a novice from trying either. As for myself, this is a cigar I’d smoke again, and it’s worthy of a box split.