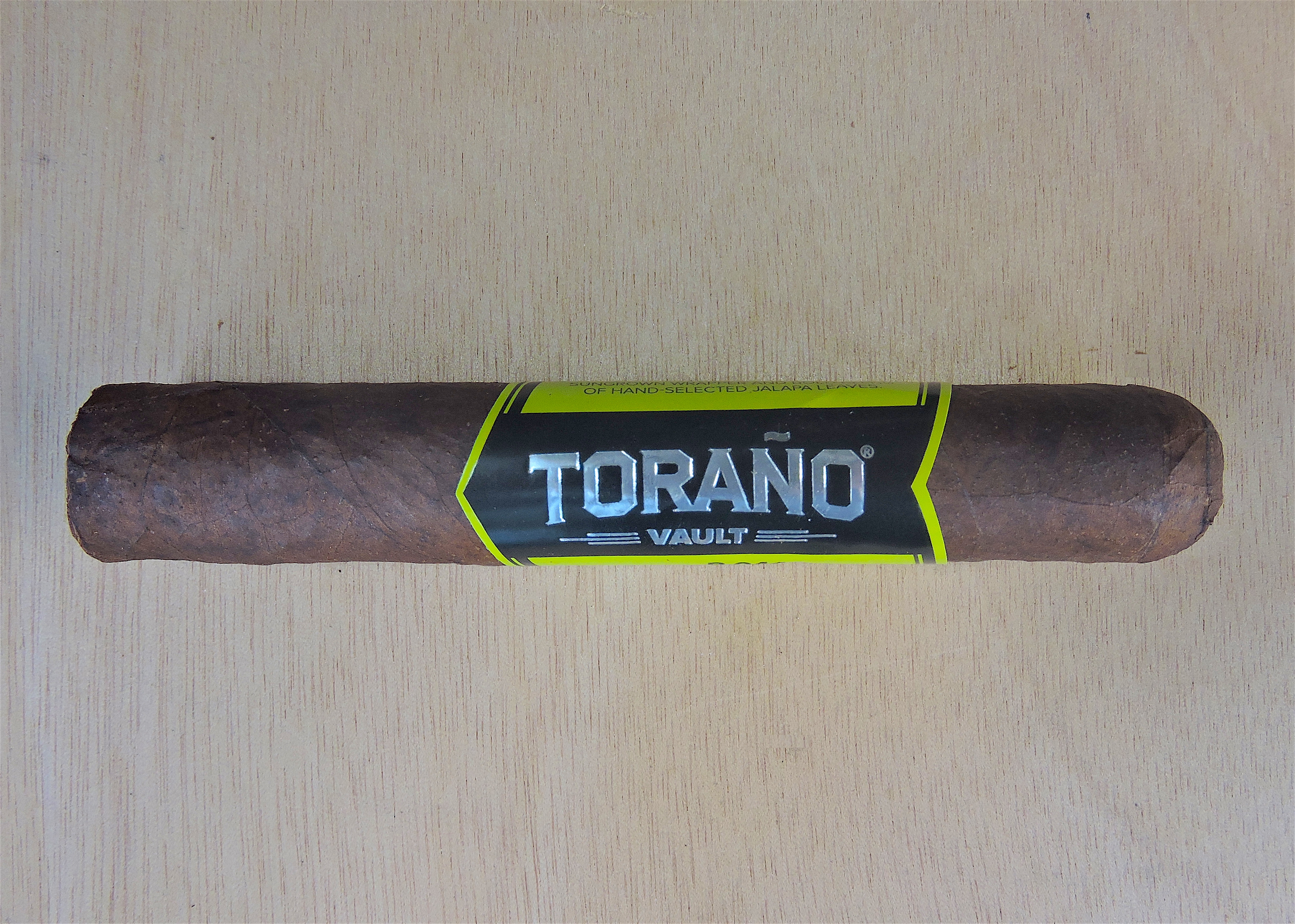 Recently the Torano Cigars brand under General Cigar Company has rolled out four new blends under the Torano Vault. These blends are significant because they are the first new Torano blends developed by General Cigar since it acquired the brands of Torano Family Cigars back in 2014. The Torano Vault line made its debut back in 2011 under the moniker “Blends from the Vault”. The story of this line dates back to 1982 when president Carlos Torano started a book that logged all of the blends since 1982 that were worked on by company. This book was literally kept under lock and key in a safety deposit box (i.e. “Vault”). The purpose of this series was to revisit some of these blends, tweak them, and see if they can come to reality. It appears that General has picked up on the concept and has introduced four new blends. Today we take a look at one of the new blends, the Torano Vault P-044 (also called the Torano Vault Green) in the Robusto size. Overall I found this to deliver a lot of what a good Nicaraguan puro should deliver at a very affordable price.

For the four new blends that were introduced to the Torano Vault line, General Cigar followed a strategy that has been employed across the other brands in its portfolio. Namely, it has divided the releases among brick and mortar exclusives and internet and catalog exclusives. The names of each of the blends are the names from the blend book. At the same time, they are also nicknamed for the color of the packaging. 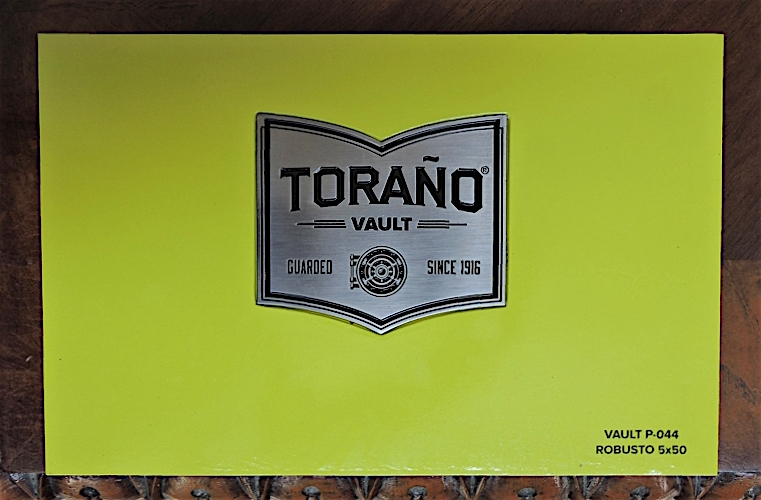 These new lines are as follows:

There were also three legacy Torano Vault cigars prior to the General Cigar acquisition of the brands:

The new Torano Vault cigars introduce new packaging, banding, and logos. While there is no doubt the cigars feature attention grabbing colors (this is facilitated the “color” nicknames for each of the Vault releases)

There have been both comparisons and criticisms for the design. The cigars feature attention grabbing colors and a horizontal bands. The criticism is due to the parallels that can arguably drawn with the way Camacho did its rebranding in 2013.

Without further ado, let’s take a look at the Torano Vault P-044 (Torano Vault Green) Robusto and see what this cigar brings to the table: 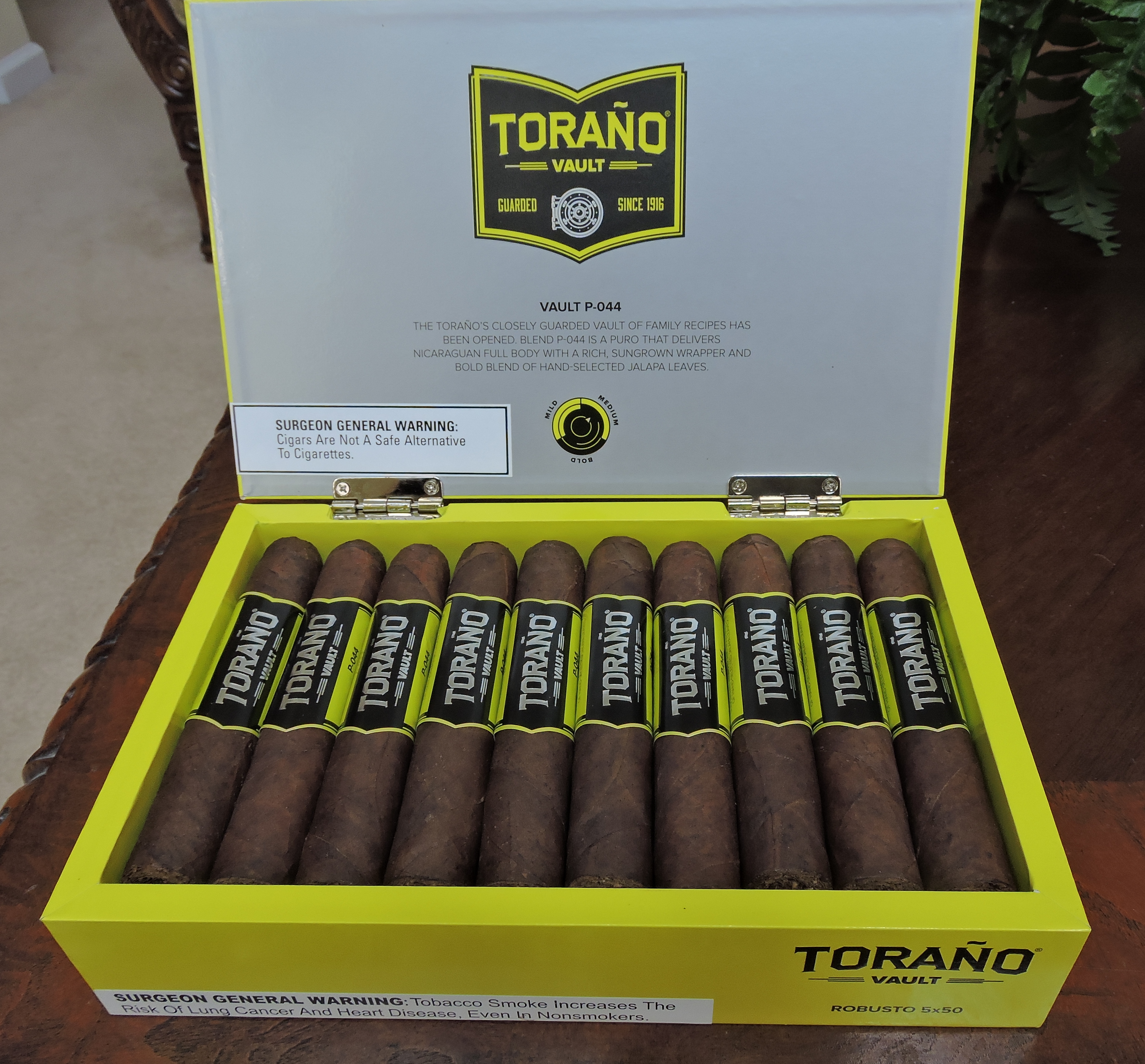 The Nicaraguan wrapper of the Torano Vault P-044 Robusto has a medium / medium to dark brown with a slight dark cinnamon tint. Upon the surface of the wrapper, I also found some darker marbling present. While there are some thin visible veins and thin visible wrapper seams, I did find the surface of the cigar to be quite smooth. The P-044 Robusto was a well-packed cigar with no soft spots present. Finally, there was a nice barnyard aroma that could be detected on the wrapper. 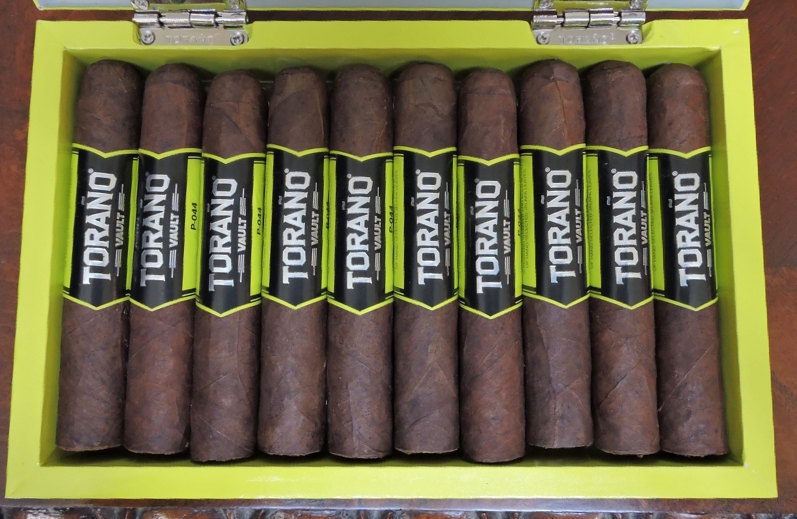 The band to the Torano Vault P-044 has a yellowish green wrapper. When you unwrap the band, it has the shape of the new Torano Vault shield logo when held sideways. 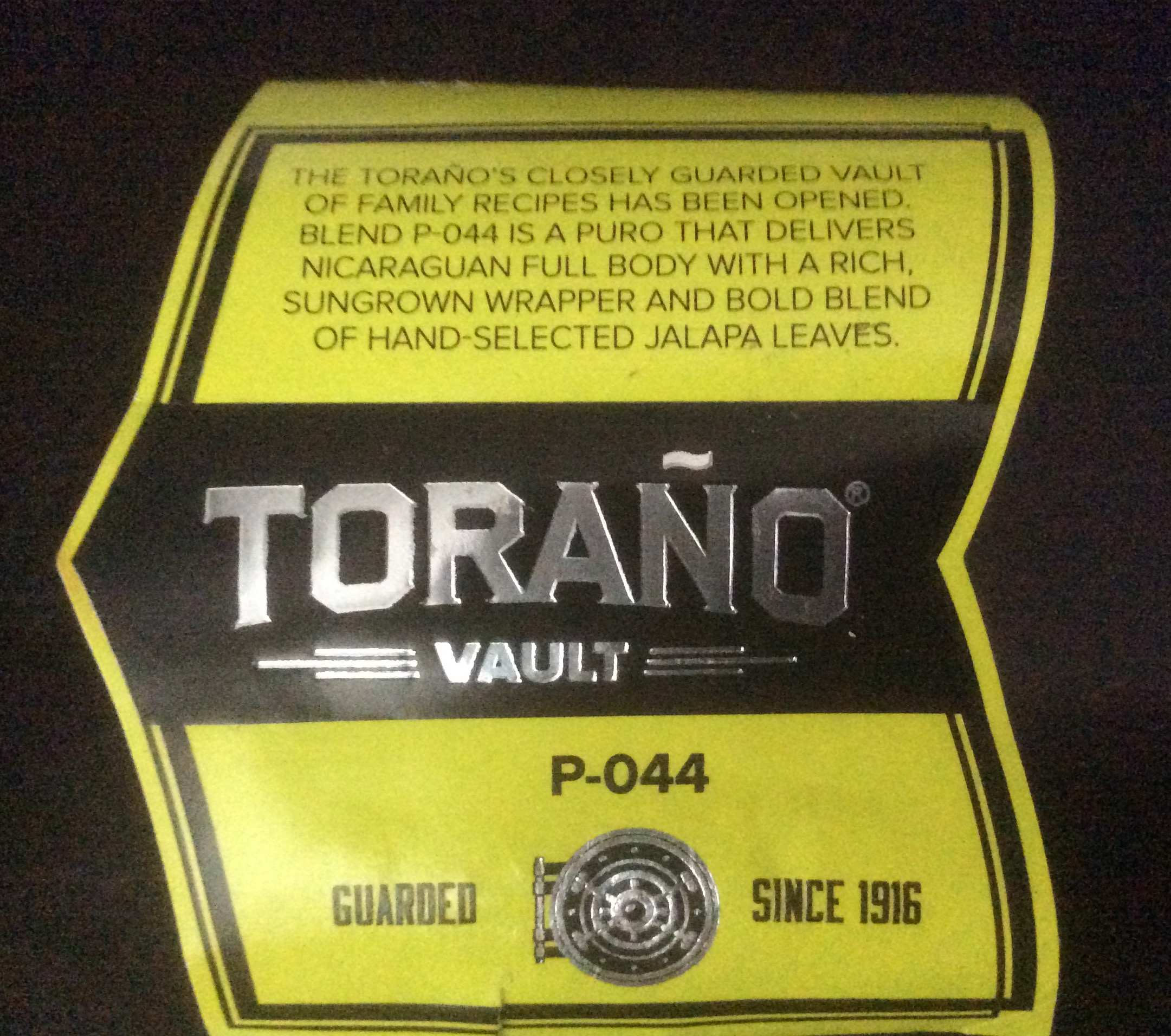 The top of the band has a yellow-green background with the text “THE TORAÑO’S CLOSELY GUARDED VAULT OF FAMILY RECIPES HAS BEEN OPENED. BLEND P-044 IS A PURO THAT DELIVERS NICARAGUAN FULL BODY WITH A RICH, SUNGROWN WRAPPER AND BOLD BLEND OF HAND-SELECTED JALAPA LEAVES”.

Just below that text is a black background with the text “TORAÑO” in large chrome font. And just below that is the text “VAULT” in smaller chrome font surrounded by chrome adornments. The lower part of the band also has a yellow-green background. Sitting on the background is the text P-044 in black font. There is a vault logo at the bottom surrounded by the black font text “GUARDED” and “SINCE 1916” on the left and right side respectively.

Prior to lighting up the Torano Vault P-044, I went with my usual choice of a straight cut. Once I clipped the cap, I moved on to the pre-light draw. The dry draw produced a sweet natural tobacco flavor with a touch of chocolate mixed in. There were also some notes of baker’s spice with a little red pepper. Overall I found this to be a very good pre-light draw. At this point I was ready to light up the Torano Vault P-044 Robusto and see what the smoking experience would have in store.

The natural tobacco notes moved into the forefront early on. At the same time, the red pepper notes moved into the background where they were joined by some cedar notes. Throughout the first third, I found the natural tobacco (still with the sweetness and chocolate component) remained grounded in the forefront. From time to time the cedar notes made their way into the forefront. The red pepper remained secondary (but were still prominent on the retro-hale). By the end of the first third, there was also a nut flavor I detected in the background.

Around the midway point, The cedar notes also played more of a prominent role and soon joined the natural tobacco notes in the forefront. At the same time, the red pepper and nut flavors were still in the background. As the Torano Vault P-044 Robusto moved through the early stages of the second half, the red pepper increased on the tongue.

By the last third, the cedar was now the sole primary note. Meanwhile, the red pepper was now a close secondary note. I still picked up some of the natural tobacco notes as well. This is the way the Torano Vault P-044 Robusto came to a close. The end of the cigar still had a still had plenty of flavor. The resulting nub was firm to the touch and cool in temperature.

When it came to burn and draw, the Torano Vault P-044 Robusto scored very well. Overall, the P-044 Robusto maintained a straight burn path from start to finish. There was a slight jaggedness along the burn line, but this was not a cigar that required frequent touch-ups. As for the ash, it had mostly a silver-gray color. The ash wasn’t overly firm, but it wasn’t a loose, flaky ash either. Meanwhile the cigar maintained an ideal burn rate and ideal burn temperature. 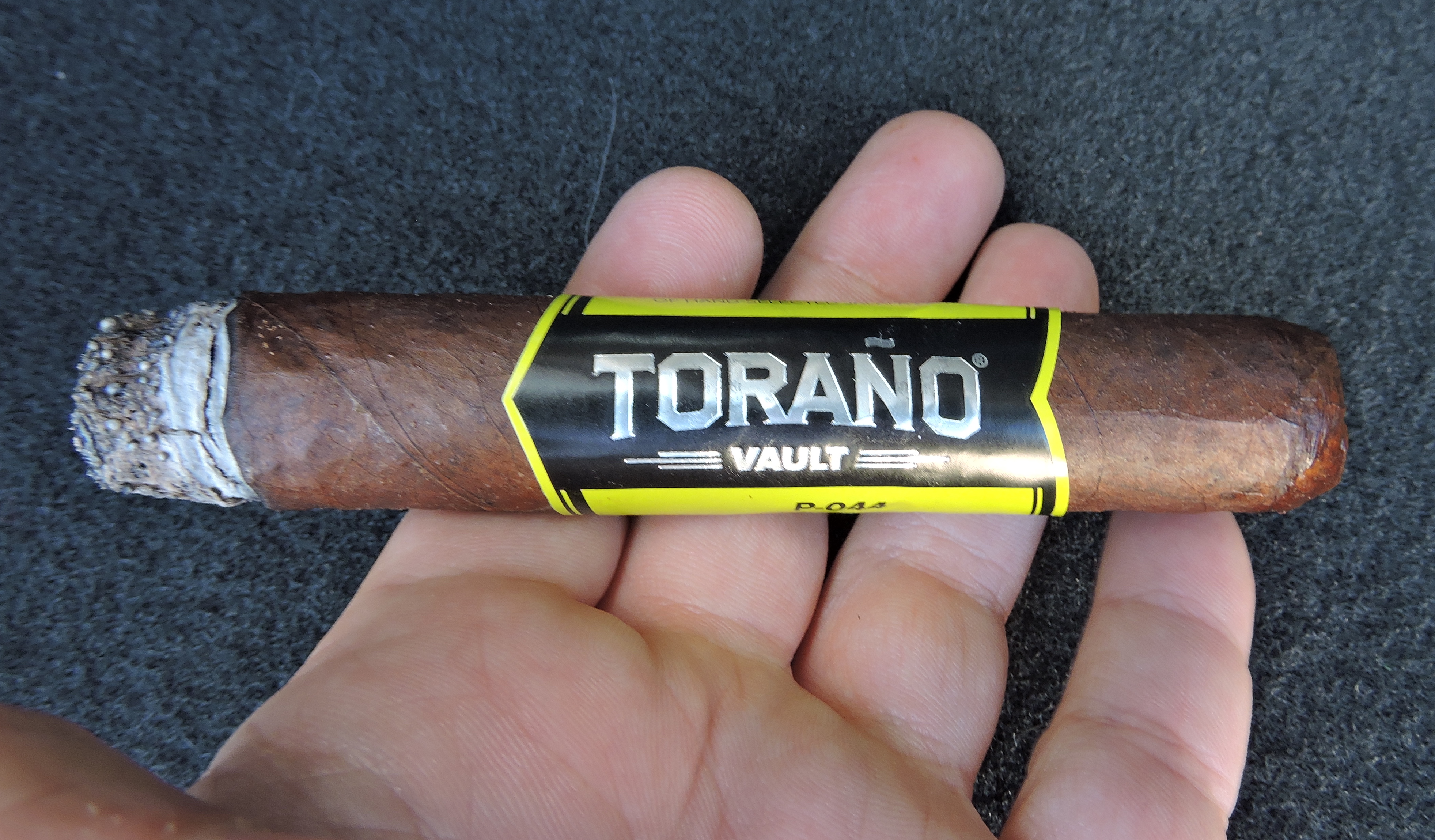 With a tighter pack on this cigar, I was wondering if I was in for a tight draw. There was no such problem with the P-044 Robusto. The cigar ended up having a touch of resistance – which is something I like on a draw. This made the draw almost perfect in my book.

In terms of strength and body, I found the Torano Vault P-044 Robusto to start out on the upper end of medium for both attributes. There was a slight increase in intensity for both attributes along the way. By the second half, I found the P-044 Robusto built up just enough strength and body to move into the medium to full range. There wasn’t much of an increase toward the end.

Along the way, the strength and body balanced each other nicely with neither attribute overshadowing the other.

Over the years, when I smoked Carlos Torano Cigars and Torano Family Cigars, they usually delivered a flavorful, medium  / medium plus cigar at a very affordable price. Coming in at $5.50 per cigar, the Torano Vault P-044 Robusto pretty much lived up to this reputation. In addition, this cigar delivered what I would expect from a Nicaraguan puro – namely some nice sweetness and a healthy, but not overpowering spice. Given this the first new blend General Cigar created for the Torano Cigars brand, I would say they did very well. The controversy of the packaging must be put aside when scoring a cigar as that should be based solely on the tobacco product. This is a cigar I would recommend to either a seasoned or novice enthusiast. As for myself, it’s a cigar I would easily smoke again – and it’s worthy of a box split.