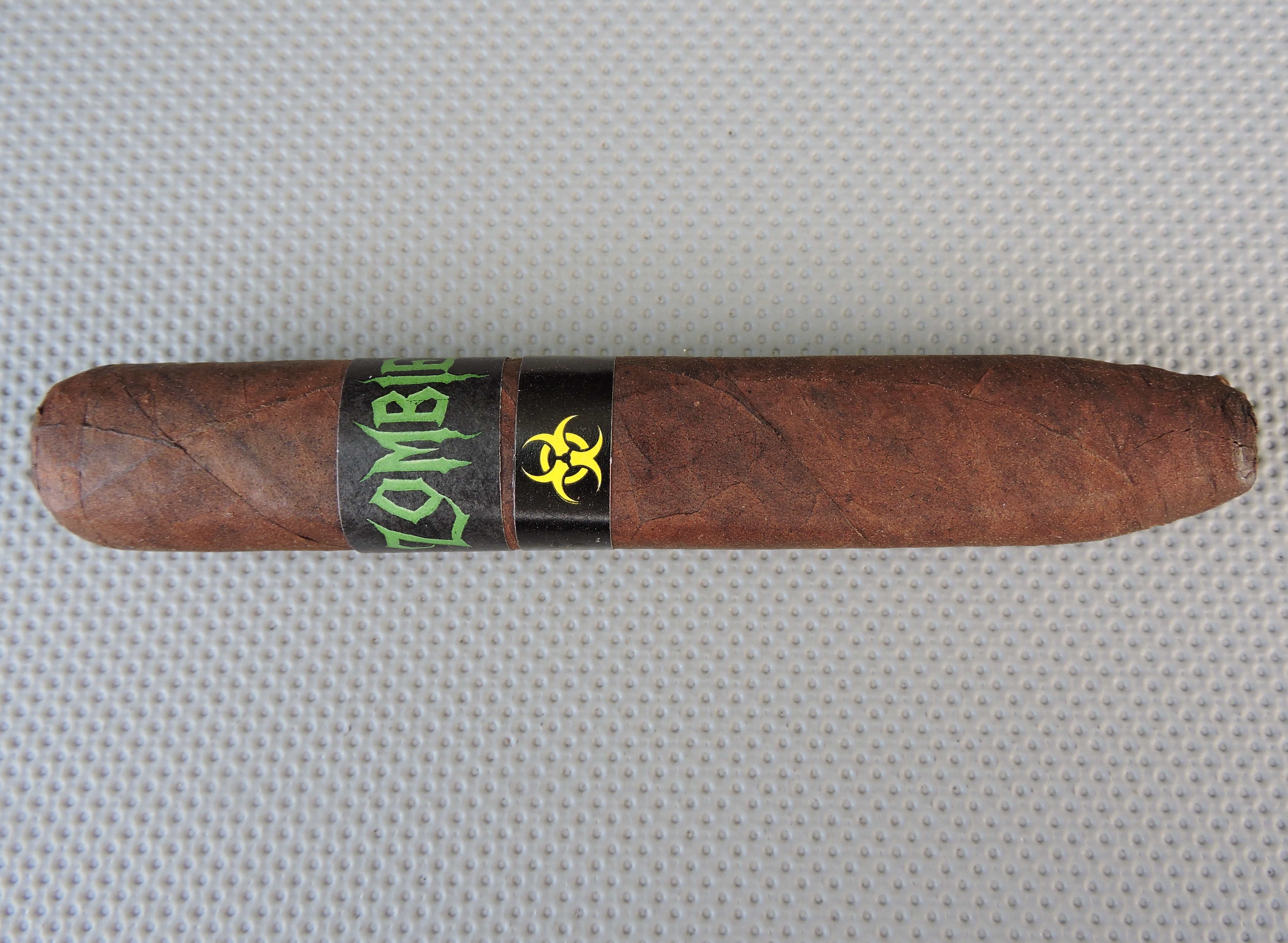 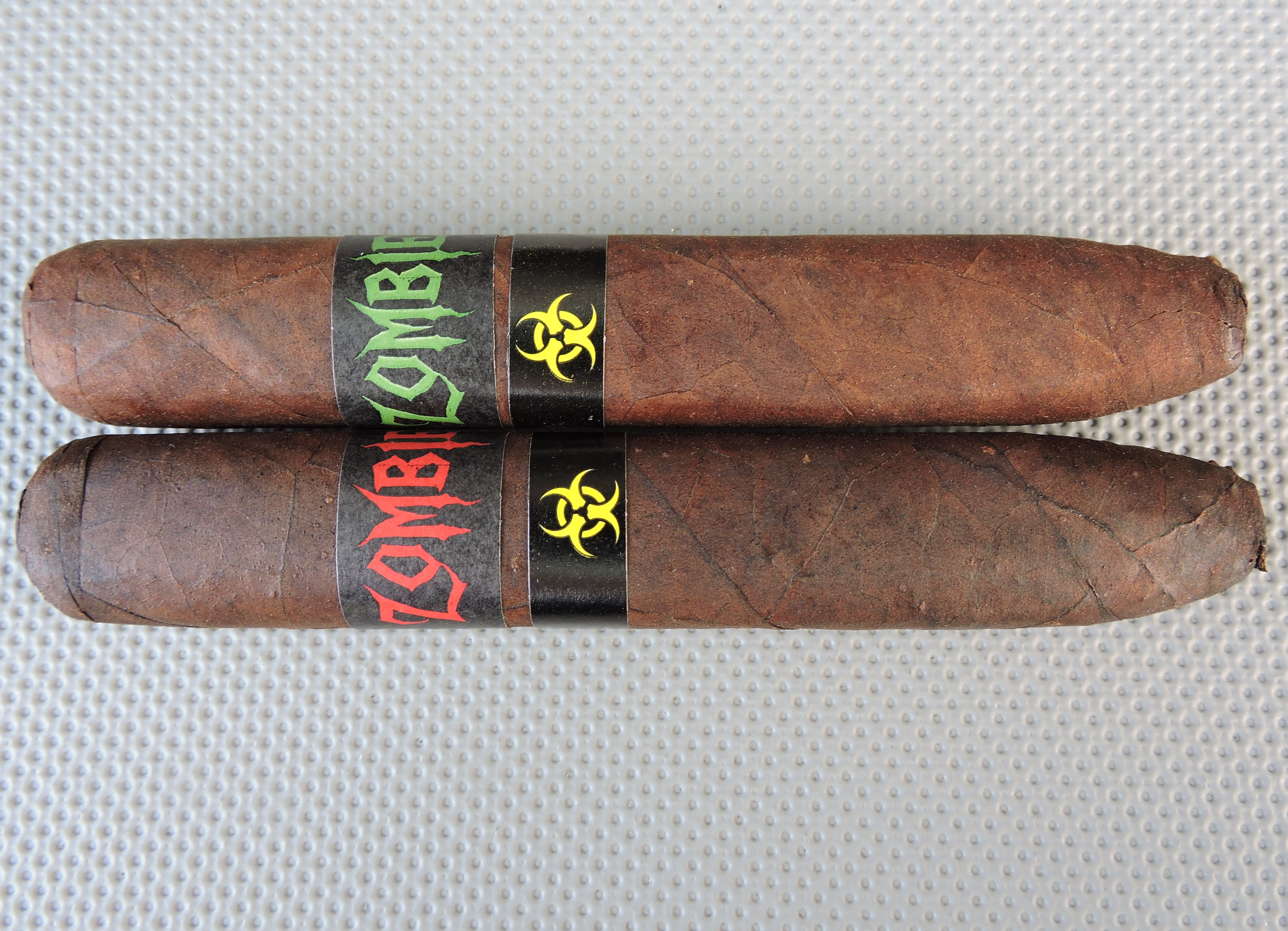 What exactly makes up the Zombie blend hasn’t been disclosed.  Originally it was released as a double-capped cigar, but the since 2013, it has been an inverted torpedo featuring a tapered footer and the 2016 Biohazard releases follow suit.  There have also been several blends released in the series (such as 2013’s “White Box”), but for the past three years Zombie has been released in the Green and Red blends.

There have also been several “offshoot” blends. These offshoot blends should not be confused with the actual Zombie Green and Zombie Red blends.

Viaje Founder Andre Farkas has taken the Zombie concept and developed a storyline on how it connects some of his cigar releases.

The story starts out with the explosion of the Viaje WMD (Weapon Mass Destruction). Because of radiation from the explosion, people end up mutating into “Zombies“. In fact, recently one person mutated into a Zombie was “Farmer Bill Hatchet“. The Zombie Super Shot helps arm people for what Farkas calls the “Zombie Apocalypse”. Meanwhile, the only way to cure the infected Zombies is with the Zombie Antidote. While the Biohazard wasn’t quite explained from Farkas, one can assume its a byproduct of disposing the Zombie Antidote.

Without further ado, let’s take a look at the Viaje Zombie Biohazard Green and see what this cigar brings to the table.

Other than the Nicaraguan Criollo wrapper, much of the details of the 2016 edition of the Viaje Zombie Biohazard Green have not been disclosed.

The 2016 edition of the Viaje Zombie Biohazard Green is a box-pressed cigar with a tapered footer that is open. The vitola measures 5 x 52. The cigars are packaged in 20 count elongated boxes.

The Viaje Zombie 2013 Viaje Zombie Biohazard Green has a coffee bean color. The wrapper itself has a touch of colorado red mixed in. Upon closer examination, some darker marbling can be seen on the wrapper’s surface. This is a wrapper that has a light coating of oil. There are some thin veins and thin visible wrapper seams. Toward the open footer, there is a gentle taper.

As I typically do, I went with my usual choice of a straight cut to remove the cap of the 2016 edition of the Viaje Zombie Biohazard Green. Once the cap was clipped, I moved on to the pre-light draw. The dry draw delivered a mix of coffee and earth notes. Overall I considered this to be an excellent prelight draw. At this point I was ready to light up the Viaje Zombie Biohazard Green and see what the smoking phase would have in store.

The start to the Viaje Zombie Biohazard Green delivered a mix of black coffee and black pepper notes. A slight creamy undertone soon surfaced. At the same time I also picked up gentle (i.e. not overpowering) black pepper note on the retro-hale.

As the Viaje Zombie Biohazard Green burned past the tapered section, the coffee notes remained in the forefront. The pepper notes also receded into the background. Meanwhile, a fruit note also surfaced that had a slight jam texture. As the Biohazard Green moved through the first third, these fruit notes increased and moved to the forefront. At the same time, the cigar maintained the slight creamy undertone.

The early part of the third saw the coffee and fruit as the primary notes. Toward the midway point, some earth notes began to surface in the forefront and the fruit sweetness started to recede. By the end the second third, the fruit notes had returned to the background joining the pepper notes.

The last third of the cigar saw a combination of coffee and earth notes in the forefront. The pepper notes had increased, but still remained secondary. The fruit sweetness was now further in the background. This is how the cigar experience of the Viaje Zombie Biohazard Green came to a close. The resulting nub was firm to the touch and cool in temperature.

The burn to the Viaje Zombie Biohazard Green wasn’t the prettiest one, but it still performed well. There was some waviness on the burn line, but overall the Biohazard Green maintained a straight burn path. Along the way, there was what I considered a normal amount of touch-ups to maintain the burn. The resulting ash had a salt and pepper color. This ash was not overly firm, but not loose or flakey either. Meanwhile the burn rate and burn temperature were both ideal. 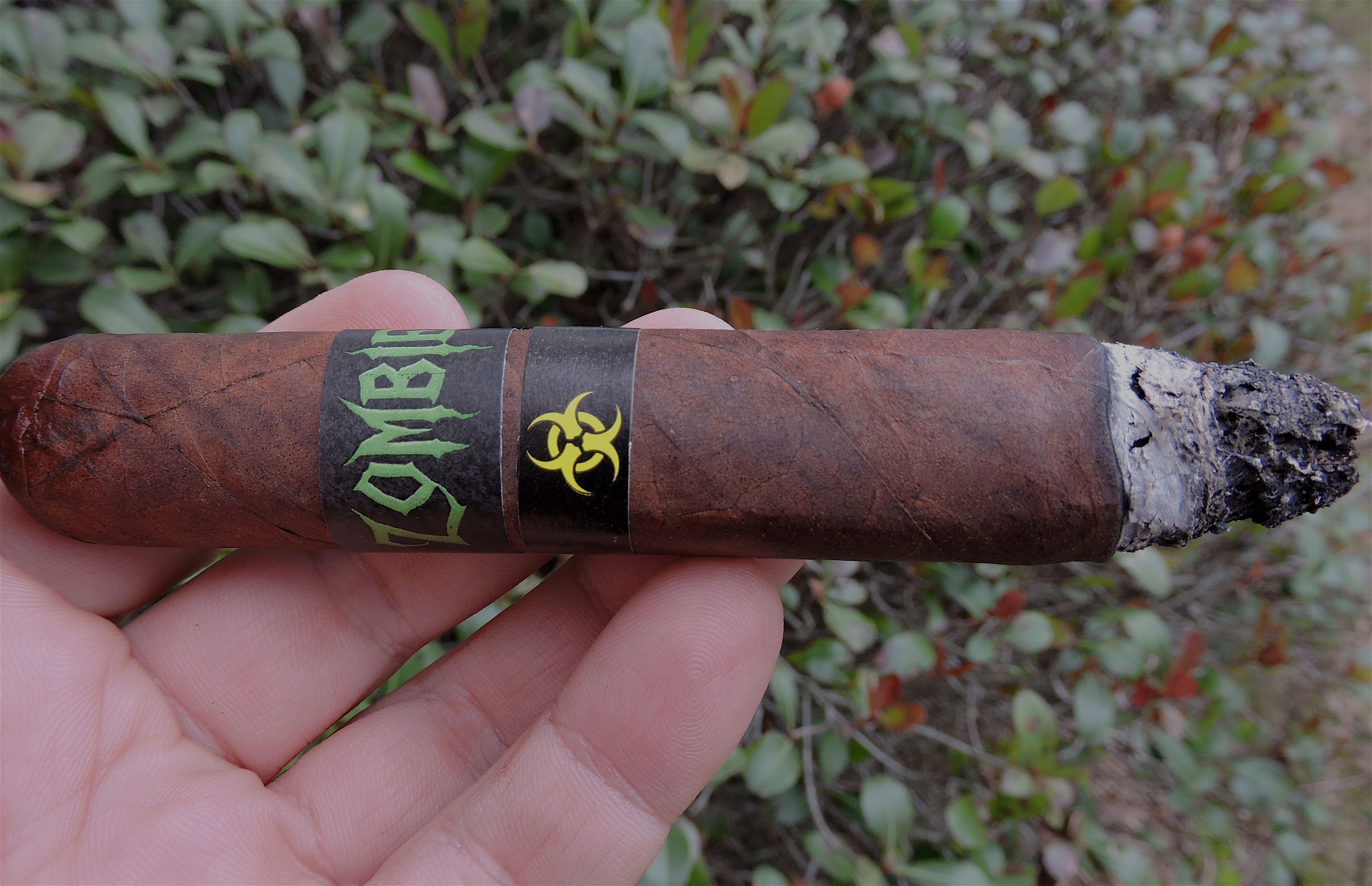 The draw to the Viaje Zombie Biohazard Green performed very well. This was not a loose nor tight draw. It was a low maintenance cigar to derive flavor from.

From both a strength and body perspective, I found the Viaje Zombie Biohazard Green to be slightly dialed back when compared to the rounded Viaje Zombie Greens.

While the Viaje Zombie Biohazard Green shared some of the same characteristics as the rounded Viaje Zombie Green, yet there were still some differences in terms of flavor, strength, and body. There are a lot of variables that factor in to this – namely age of the cigar, vintage of tobacco, box-pressed versus parejo, and blend composition. While I could not pinpoint the root cause of the differences, I can say that I liked very much what the Zombie Biohazard Green brought to the table. This is a cigar that I could recommend to an experienced cigar enthusiast and it’s a nice cigar for a novice to graduate to something to medium / medium plus. As for myself, this is a cigar I’d smoke again – and it’s one worthy of a box split.