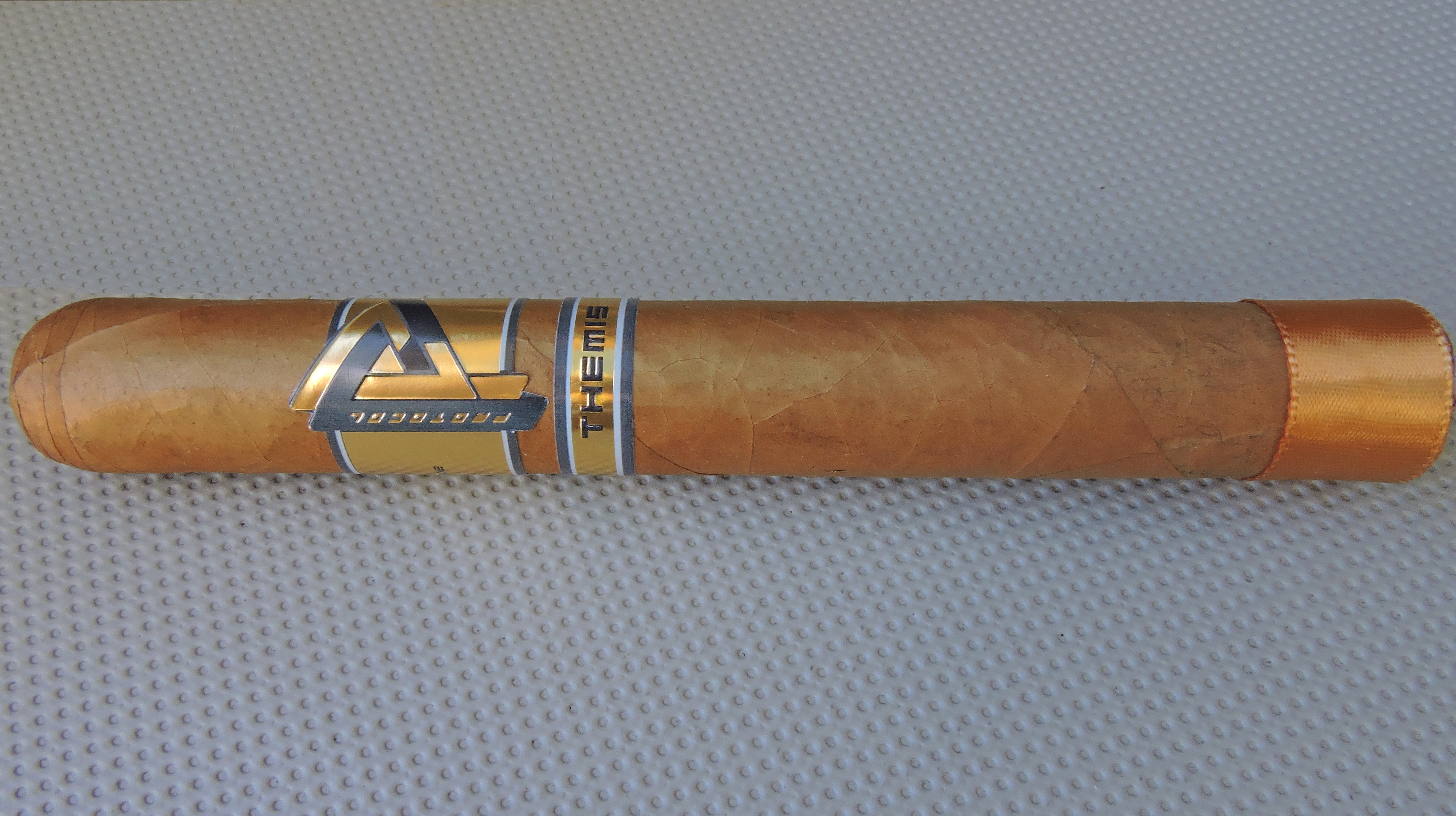 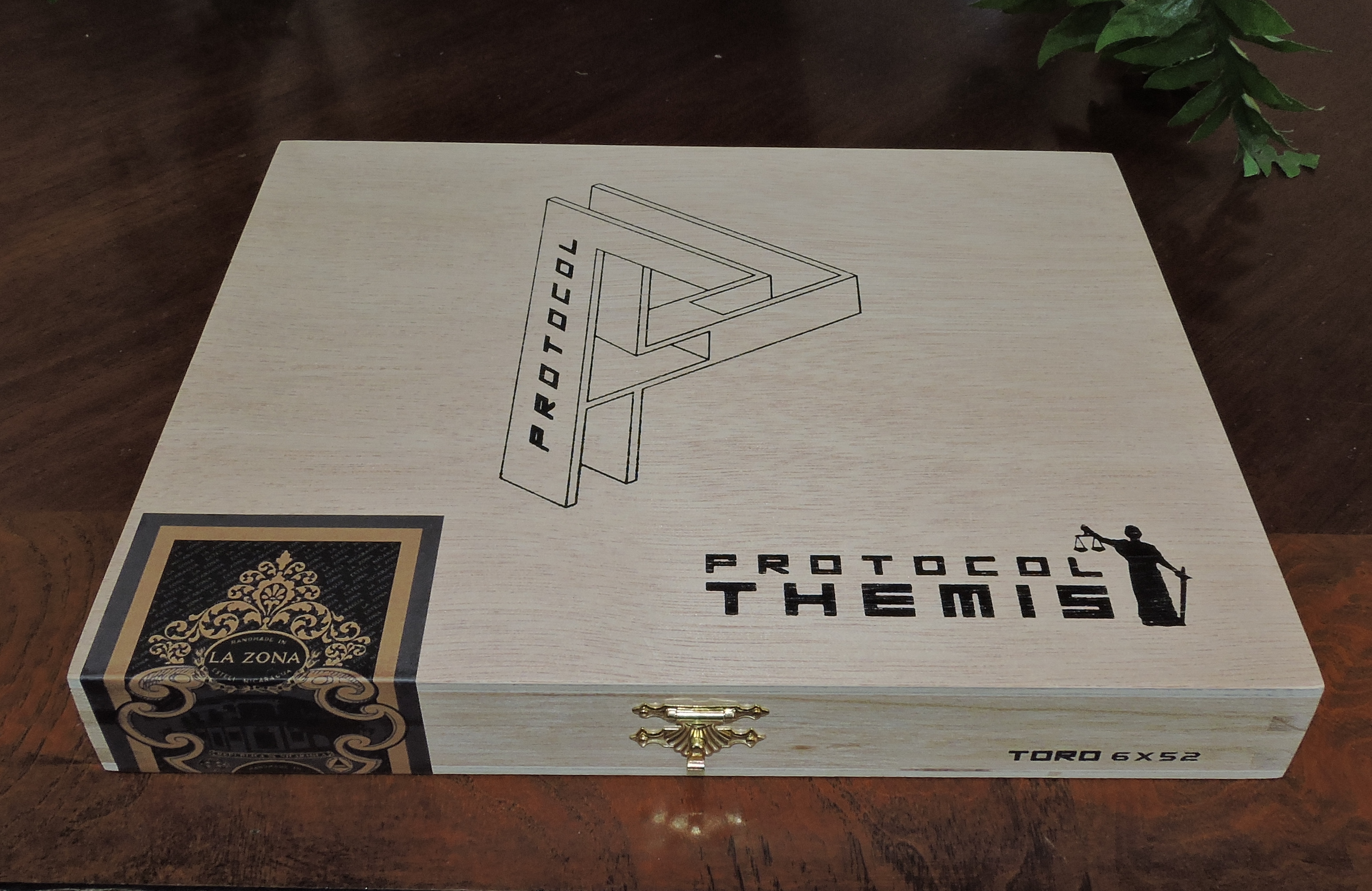 The name of the cigar keeps to the company’s law enforcement motif as partners Bill Ives and Juan Cancel both serve as law enforcement officers. It also pays tribute to the Greek heritage of managing partner William Agathis. This is because Themis is the name of the Lady of Justice symbol who was the Titan goddess of divine law and order. According to Cubariqueño, the Themis was the brainchild of Agathis who worked closely with La Zona’s Hector Alfonso Sr. to create the blend. Coincidentally, Alfonso also works in law enforcement in addition to his duties at La Zona and Espinosa. 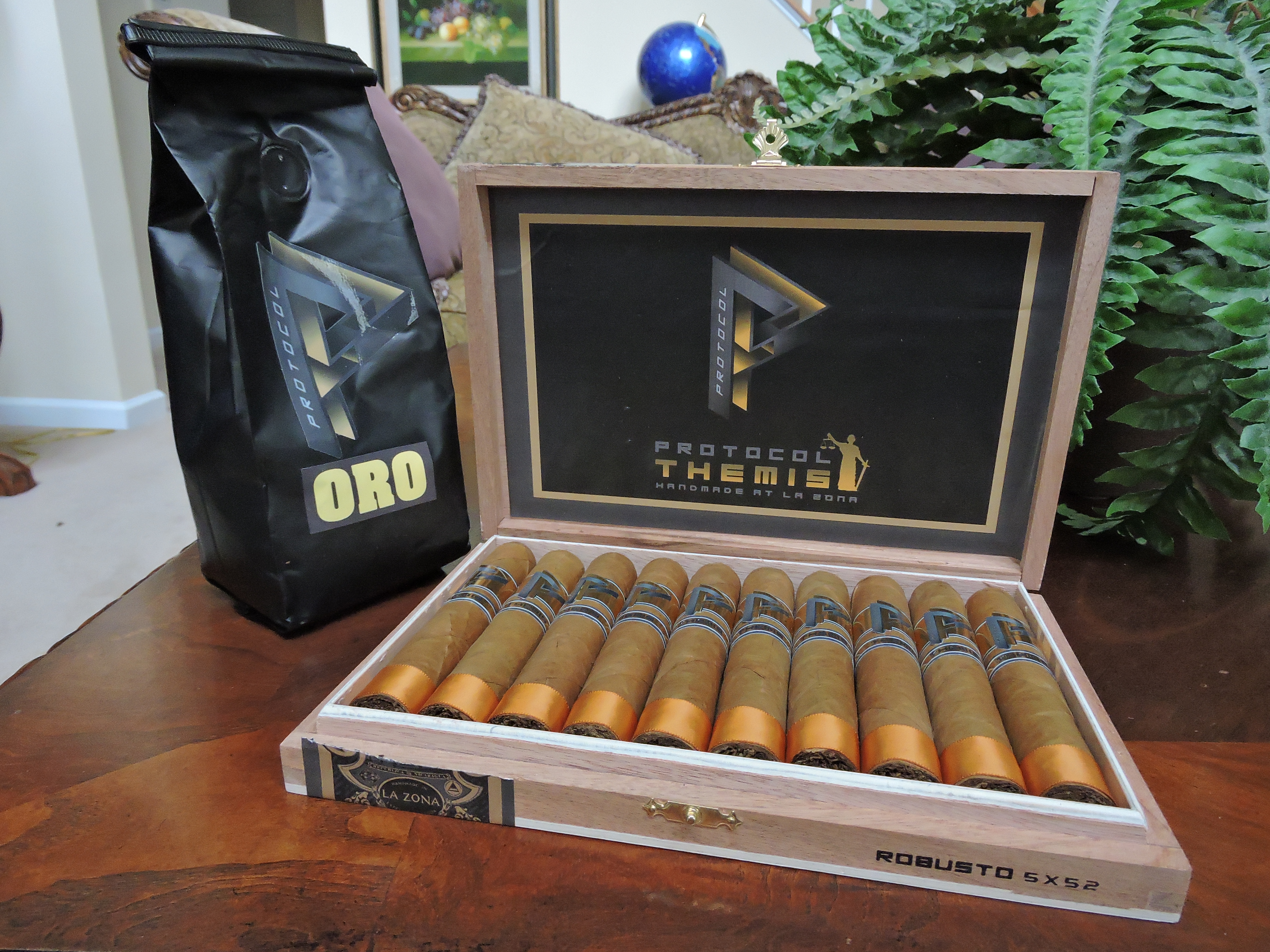 Without further ado, let’s break down the Protocol Themis Toro and see what this cigar brings to the table 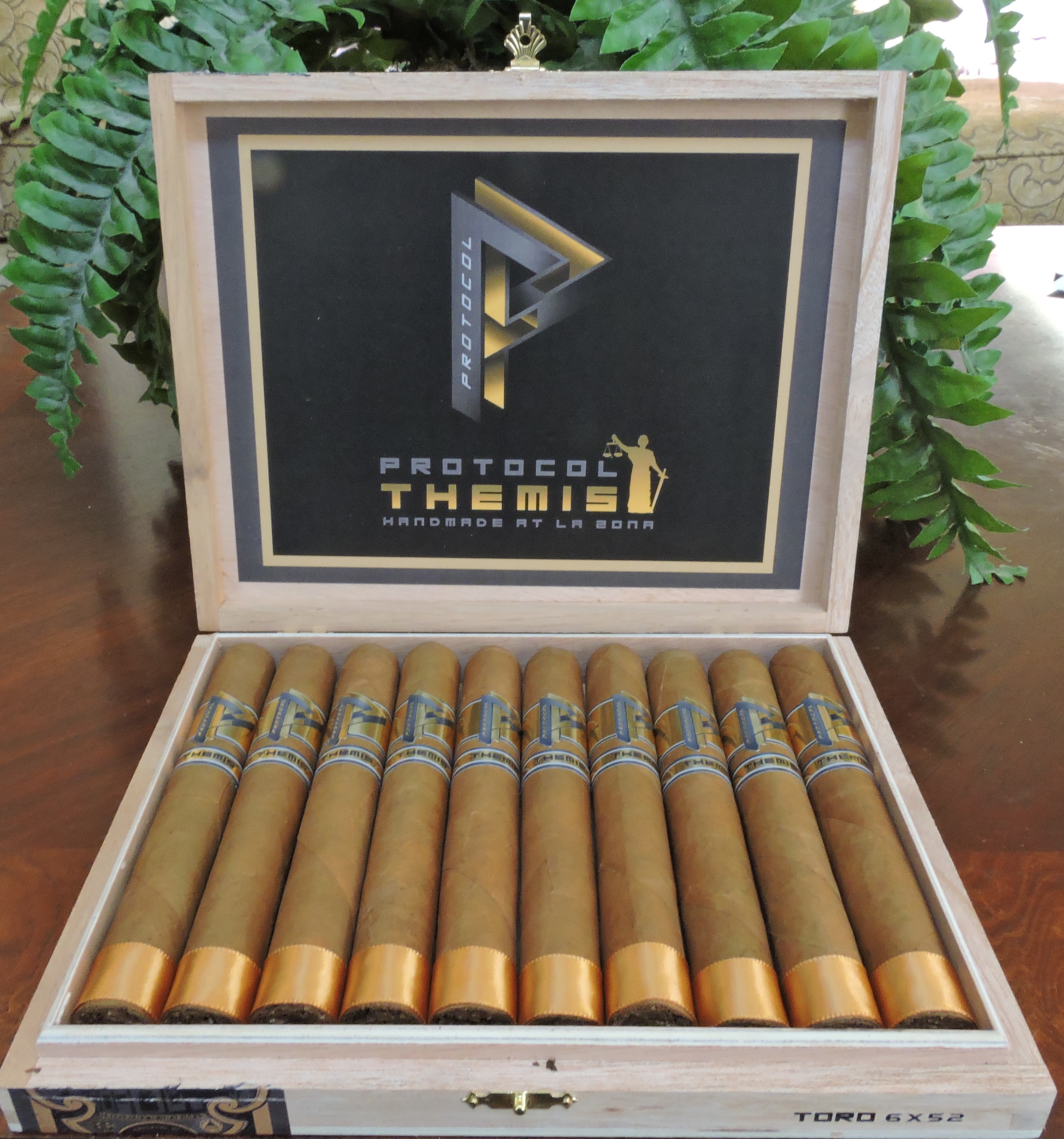 The Ecuadorian Connecticut Shade wrapper of the Protocol Themis Tor had a light golden brown color to it. The Toro was slightly more weathered than its Robusto counterpart. There was a light coating of oil on the surface. There were a few visible veins, but most of the wrapper seams were on the thin side. 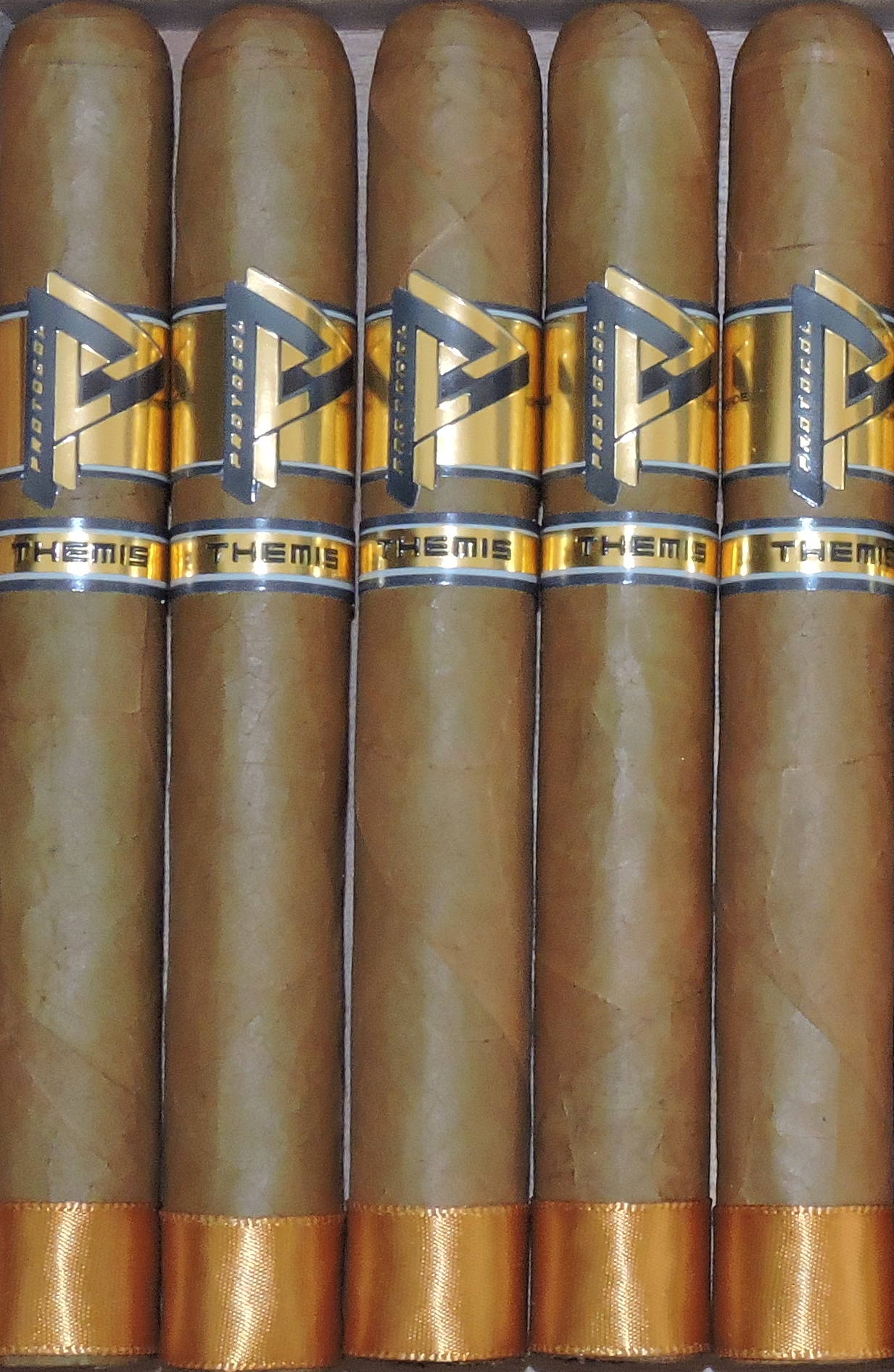 There are two bands on the Protocol Themis. Each of the two bands is a variant of the original Protocol banding design, but utilizes a different color scheme. The primary band has a metallic-colored background with charcoal gray trim. Prominently on the band are two interlocking modern-looking “P”s that have a three-dimensional effect (both using a combination of gold and charcoal gray with a “shadowing effect”). The text “PROTOCOL” is placed on a gray section of a “P”. To the left of the “P” is the text “HANDMADE” in charcoal-colored font, while to the right is the text “LA ZONA” – also in charcoal-colored font. The remainder of the band has dark gray trim. On the far right of the band is the text “AGATHIS.” in gold font positioned in landscape mode.

Just below the primary band is a secondary band. This is a thin band that is also metallic gray in color with charcoal gray trim. On that silver background is the text “THEMIS”  in charcoal gray font. The footer is finished with a ribbon that has a butterscotch color.

Prior to commencing the cigar experience, I went with a straight cut to remove the cap of the Protocol Themis Toro. After removing the cap, I proceeded with the pre-light draw. The dry draw delivered notes of citrus, cream, and a slight cedar note. Overall, I considered this to be an excellent pre-light draw. At this point, I removed the ribbon of the Protocol Themis Toro, toasted the foot of the cigar, and moved on to the smoking experience.

The Protocol Themis Toro began with notes of cream, citrus, and cedar. Early on the citrus notes moved into the forefront and the cedar and cream notes settled into the background. I soon detected some nut flavor. Meanwhile, the retro-hale produced an additional layer of cedar and citrus.

Close to about the 15% point, the cream and nut notes formed a nice fusion and moved into the forefront and the citrus notes moved into the background. As the Themis Toro moved into the second third, the flavor profile remained the same, but now I detected some black pepper on both the tongue and the retro-hale.

Later in the second third of the Themis Toro, the cedar notes joined the creamy-nut combination in the forefront. The pepper and citrus notes remained in the background. At this point, there was a slight bready note that surfaced. These bread notes were also present on the Robusto, but I found them more dialed back on the Toro.

The final third of the Themis Toro saw the cedar displace the creamy-nut flavors as the primary note. The creamy note joined the pepper, citrus, and bread notes.  This is the way the cigar experience of the Themis Toro came to a close. The resulting nub was firm to the touch and cool in temperature.

Overall the Protocol Themis Toro scored very nicely when it came to burn. This was a cigar that had little trouble maintaining a straight burn path and had little trouble keeping a straight burn line. The resulting ash wasn’t overly firm, but wasn’t loose or flakey either. This was an ash that had a classic salt and pepper color scheme. I found this was a cigar that also had an ideal burn rate and ideal burn temperature. 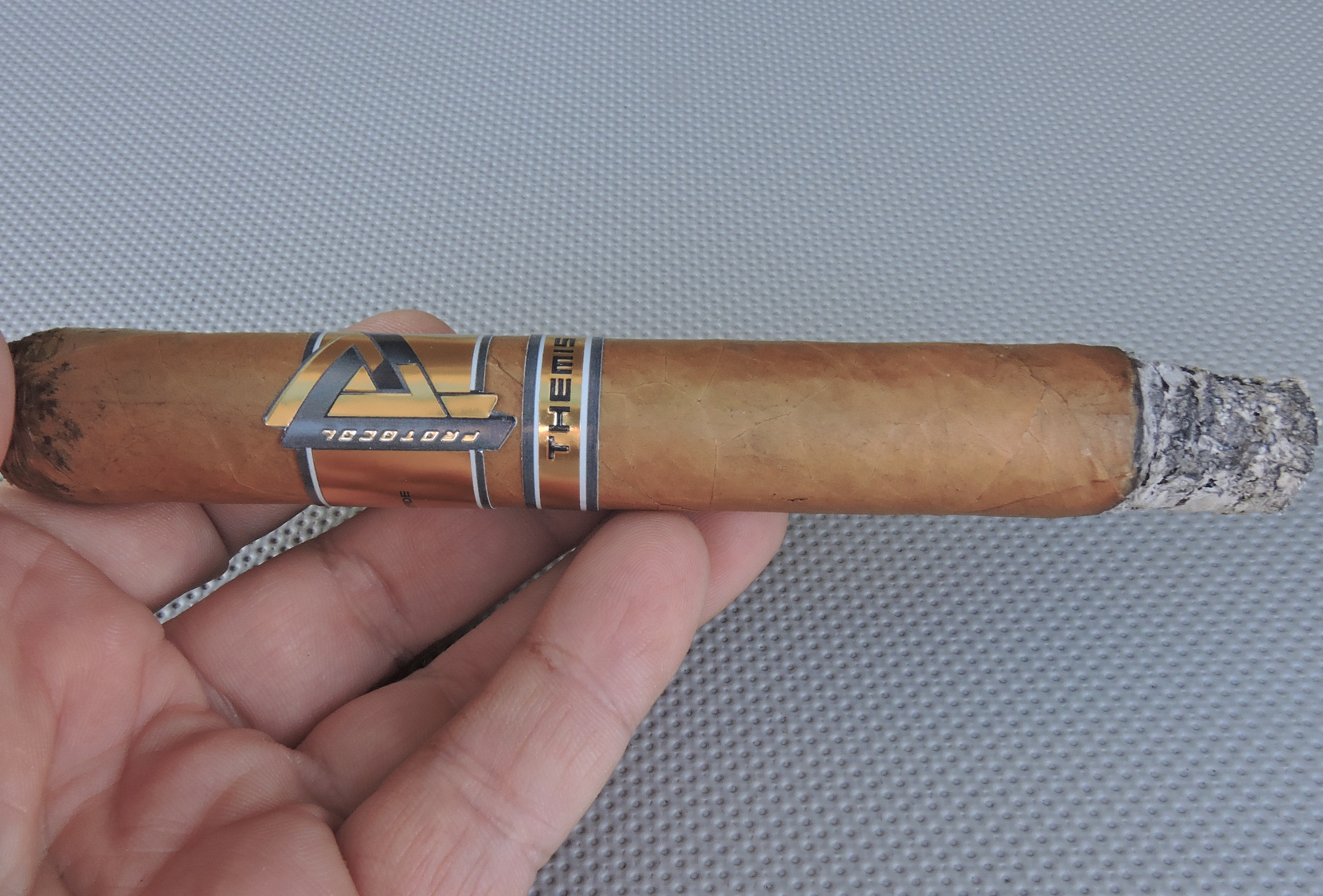 Burn of the Protocol Themis Toro

The draw to the Protocol Themis Toro also scored nicely. It seemed to strike a nice balance between openness and resistance. In the end, I still found this to be a low maintenance cigar to derive flavor from.

When it came to the Protocol Themis Toro, I found it to be similar in terms of strength and body as its Robusto counterpart. This was a cigar that I categorized as a medium strength, medium-bodied cigar from start to finish. Along the way there was a slight increase in strength and body, but by the end of the cigar, both attributes remained in the medium range.

When you look at the Protocol line by Cubariqueño, the Themis is probably going to be the one offering that is considered to be a “milder” offering. However, when I look at the grand scheme of Connecticut Shade cigars, this is probably one that would be considered being on the bolder side with its medium-strength, medium-bodied profile.

When I assessed the Robusto, I mentioned this would be a cigar that would respond well to age. That is certainly the case so far. The Toro I smoked had about five months of age on it – and its an elevated smoke from how it was back then.

The Protocol Themis Toro cigar is one I could recommend to both novice and experienced cigar enthusiasts. As for myself, this is a cigar I would smoke again and it’s one worthy of a box purchase.