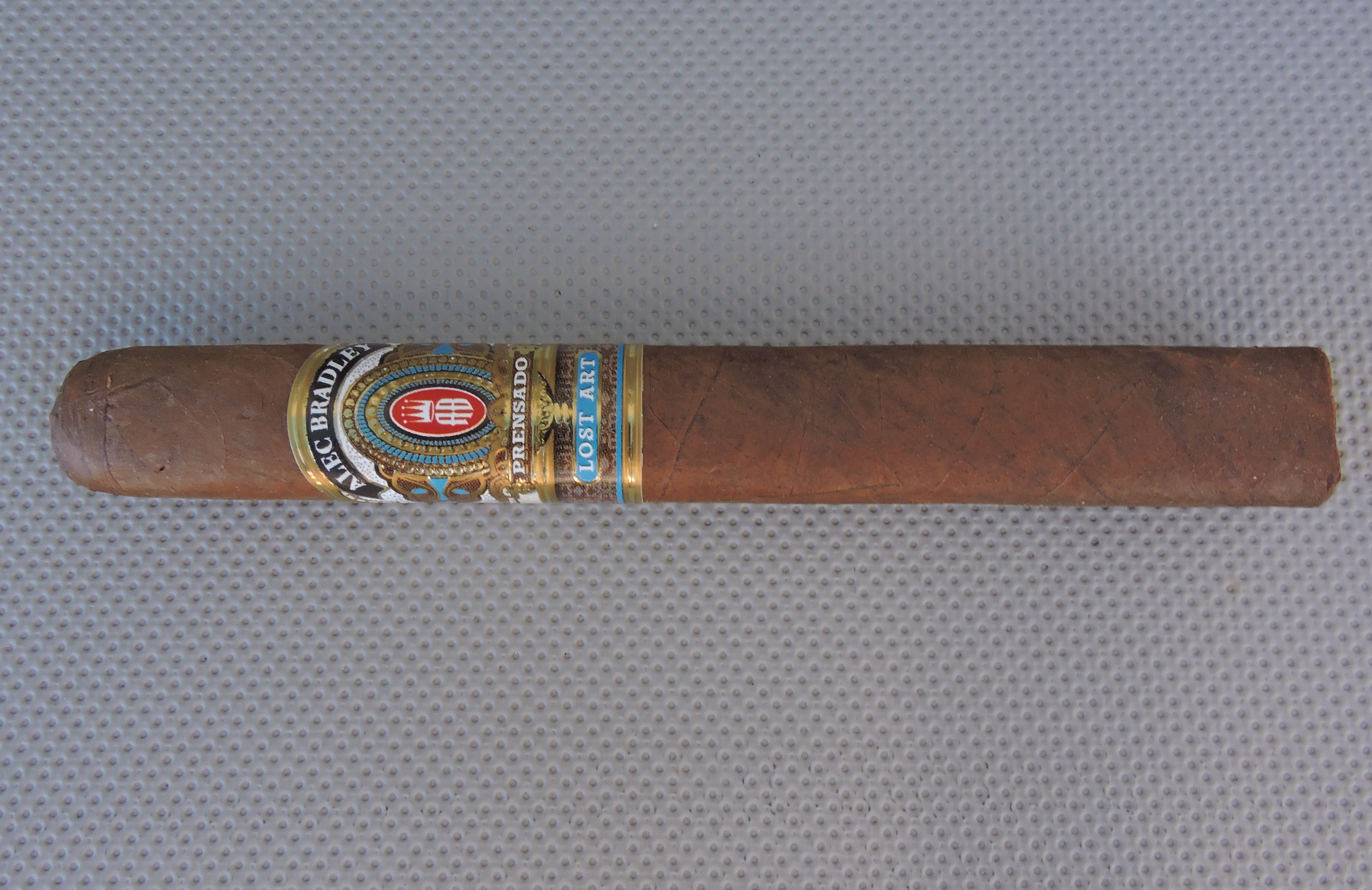 One common thread with both of the 2017 Alec Bradley IPCPR releases was that both were extensions of two of the company’s most popular lines over the past five years, the Alec Bradley Prensado and the Alec Bradley Black Market. While they are dubbed as “extensions”, they are different blends in their own right., The name “Lost Art” pays homage to the art of making premium cigars. The fact that making a product entirely by hand is becoming a “Lost Art”, thus the name.

Without further ado, let’s break down the Alec Bradley Prensado Lost Art Gran Toro and see what this cigar brings to the table.

The Lost Art is a completely different blend than the original Alec Bradley Prensado. It features a blend of five Central American tobaccos from Nicaragua and Honduras. The blend is highlighted by a Honduran wrapper and a dual binder. The cigar is made in Honduras at the Raices Cubanas factory.

The Alec Bradley Prensado Lost Art is available in five box-pressed sizes. Like the original Prensado, each cigar is box-pressed. All five sizes are available in 20-count boxes. 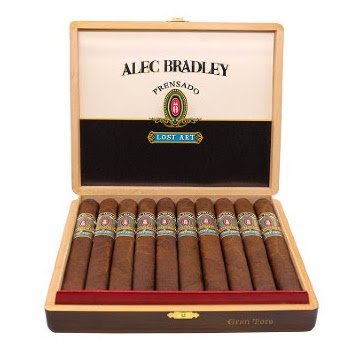 The Honduran wrapper of the Alec Bradley Prensado Lost Art Gran Toro had a medium brown color to it. Depending on how the light hits the wrapper, it will give off a Colorado tint that varies in intensity. Upon closer examination, there was some darker mottling visible on the wrapper. The wrapper also had a light coating of oil to it. This was a very smooth wrapper. The Lost Art Gran Toro was almost void of any visible veins. Any visible wrapper seams were quite thin. The box-press itself has a slight soft-press to it.

The band itself has a mostly antique white, blue, gold, and black color scheme to it. The band is highlighted on the center by the red and white Alec Bradley ovular badge. Toward the top of the band is a black ribbon-like design with the text “ALEC BRADLEY” in white font. Just below the badge is the text “PRENSADO” in small white font just below the badge. The lower part of the band features the text “LOST ART” in white font. To the far right is a smaller red and white Alec Bradley ovular badge that serves as a band fastener. Just to the left of that badge is the company motto “LIVE TRUE” in a small red handwritten font.

Prior to lighting up the Alec Bradley Prensado Lost Art Gran Toro, I went used a straight cut to remove the cap. With the cap detached, it was time to commence the pre-light draw. The dry draw delivered notes of natural tobacco, leather, and a slight tingly spice skewered toward the black pepper side. Overall I considered this to be a satisfactory pre-light draw. At this point I was ready to light up the Prensado Lost Art Gran Toro and move on to the smoking phase.

The Alec Bradley Prensado Lost Art Gran Toro started out with a mix of natural tobacco, cedar, classic wood, cream, and black pepper. As the cigar moved through the early stages, there was no dominant note. I was a bit surprised the black pepper component was not subsiding. There was an additional layer of black pepper and cedar on the retro-hale.

By the later part of the first third, the pepper, cream, and classic wood notes moved into the forefront with the natural tobacco and cedar notes receding into the background. As the Prensado Lost Gran Toro moved through the second third, the pepper did recede into a close secondary note leaving the creamy wood notes as primary. There was still some sweetness also being derived from the cedar and natural tobacco notes in the background notes.

The last third of the Alec Bradley Prensado Lost Art Gran Toro saw the pepper return to the forefront with the classic wood. The creaminess the cigar had earlier subsided. The sweetness also being derived from the natural tobacco and cedar that was in the background also diminished. This is the way the Prensado Lost Art Gran Toro came to a close. The resulting nub was cool in temperature and slightly firm to the touch.

From a burn standpoint, the Alec Bradley Prensado Lost Art Gran Toro performed well. This cigar had no problems keeping a straight burn path. Occasionally there was a little jaggedness on the burn line, but it was quickly remedied with a touch-up and these touch-ups weren’t too frequent. The resulting ash wasn’t overly firm and there were a few points where some flaking did occur. 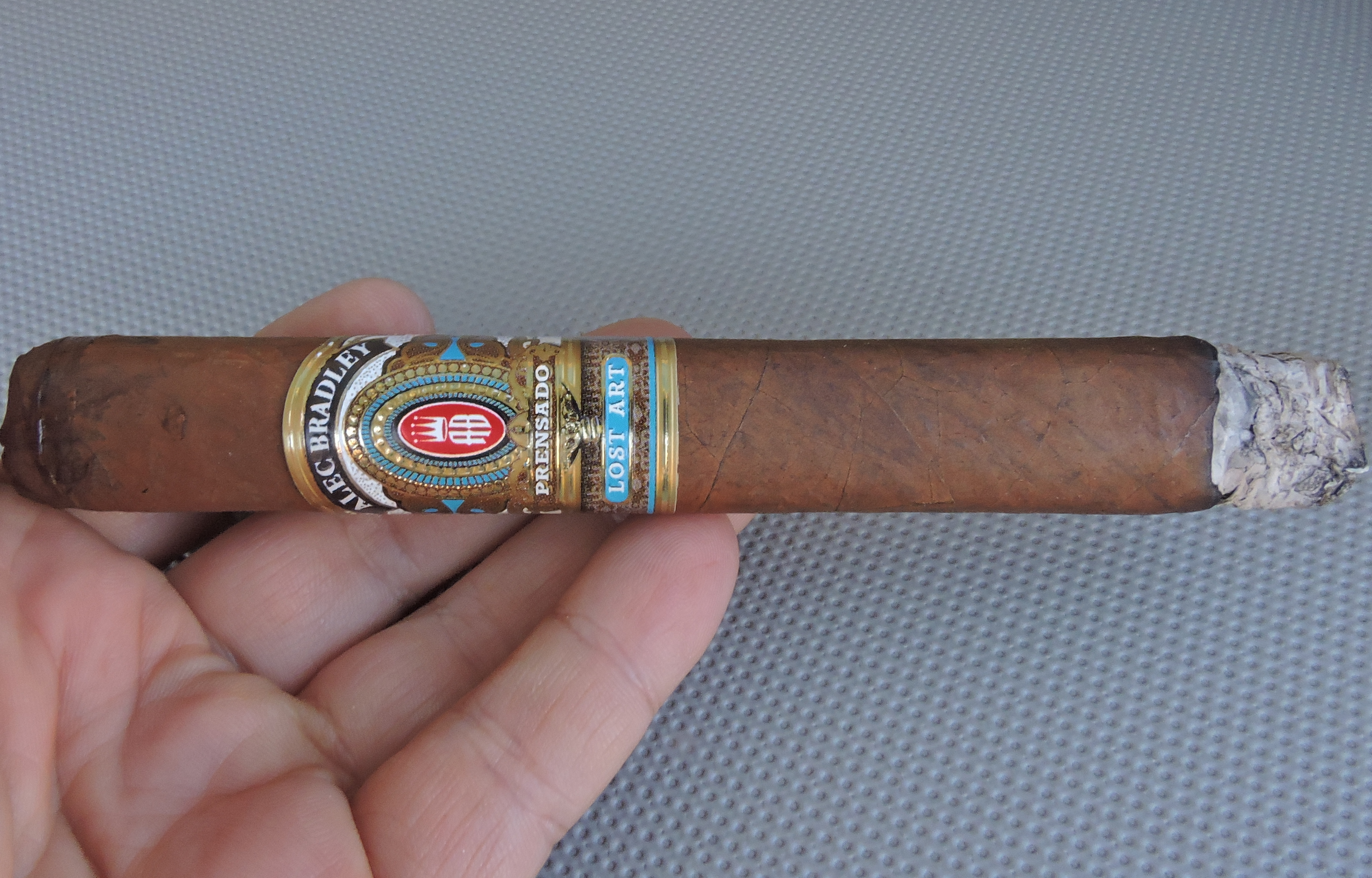 In terms of the draw of the Prensado Lost Art Gran Toro, I found it to be excellent. Sometimes a box-press cigar’s draw could be open, but in this case, I found there to be the right balance of openness and resistance. There was also a decent amount of smoke production.

This was an Alec Bradley that was on the bolder side when it came to strength and body. Overall, I found this cigar to be in the medium to full in strength. I also found the flavors to come right out of the gate at medium to full-bodied. There was a slight increase in body during the first half and but the second half, the Alec Bradley Prensado Lost Art Gran Toro had progressed into full-bodied territory where the increase in intensity leveled off.

When it came to strength versus body, I found the body had the edge throughout the smoking experience.

It might be a cliché expression, but the best way to sum up the Alec Bradley Prensado Lost Art is “it’s not your father’s Alec Bradley”. This is a bolder Alec Bradley in terms of strength, body, and flavor. This is also a spicier Alec Bradley as it will definitely hit you with notes of pepper.  This was a cigar where I enjoyed the flavors during the first two thirds, but the cigar got less interesting once the pepper spice returned in the last third. There are still enough positives with this cigar for me to give it a passing grade. Since it’s a bolder cigar, it’s one I probably would steer to a more experienced cigar enthusiast. As for myself, it’s one worth purchasing and smoking from time to time.