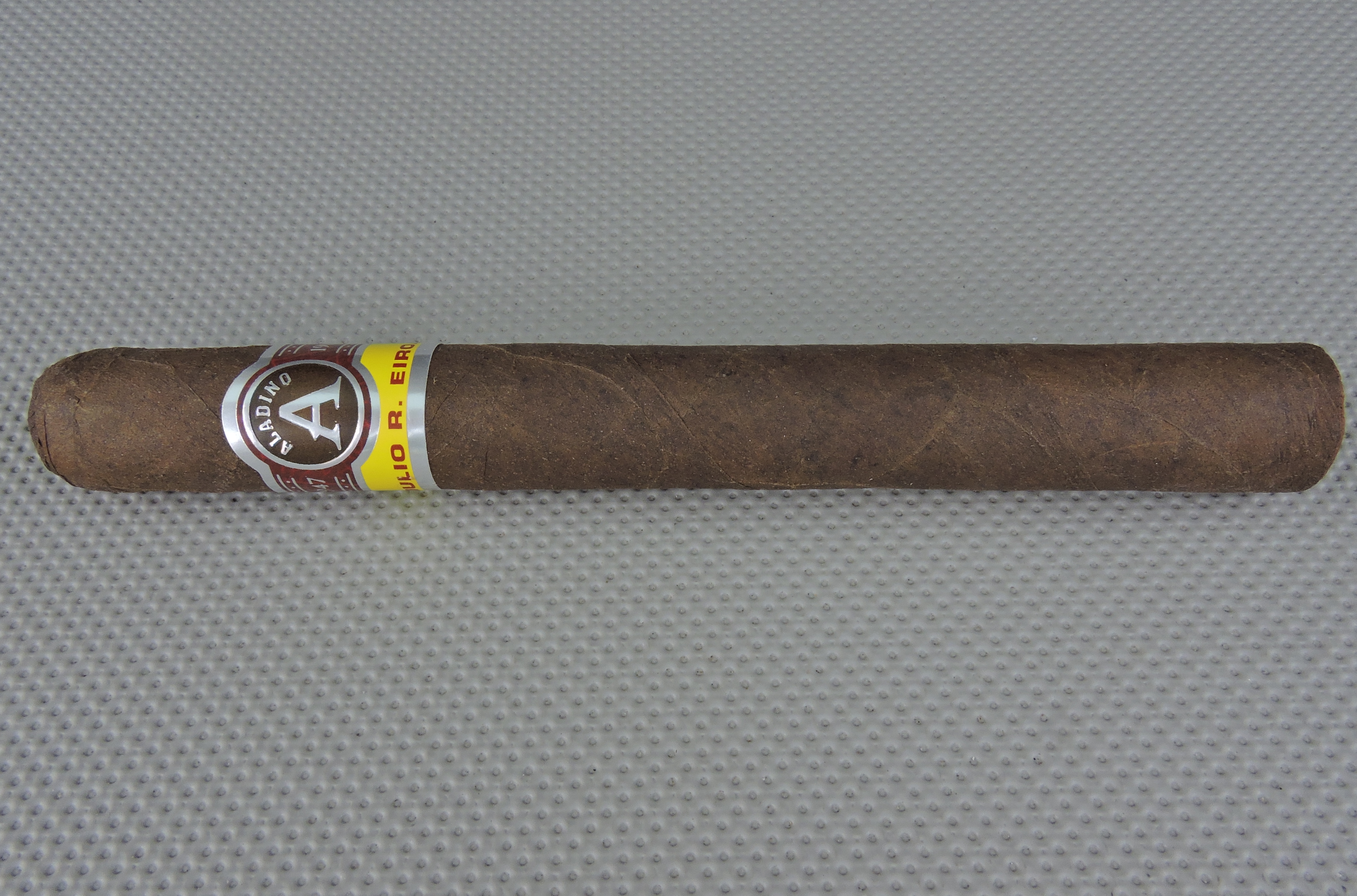 Late last year, JRE Tobacco started to soft launch the Aladino Maduro, an extension to the company’s signature line, Aladino to a group of its select retailers. JRE Tobacco is a company headed up by legendary Julio R. Eiroa and his son Justo Eiroa. It was back in 2016, when the father-son duo launched JRE Tobacco. At that time, three brands where distribution was being handled by Julio’s son Christian Eiroa were moved from Christian’s company C.L.E. Cigar Company into JRE Tobacco. These brands included Tatascan, Rancho Luna, and Aladino. Aladino Maduro marks the first major expansion of the brand’s portfolio since the launch of JRE Tobacco. It also is JRE Tobacco’s second maduro offering, now complementing the Rancho Luna Maduro. Today, we take a closer look at the Aladino Maduro in the Cazador size.

In particular, Aladino has probably become the brand that JRE Tobacco Co is most associated with. For the Aladino Maduro, the Eiroas have decided to source a San Andres maduro wrapper from Mexico. JRE Tobacco Company’s other San Andres wrapped blend is the Rancho Luna Maduro.

As for the Aladino name, it can be traced back to the 1970s. There was a historic movie theater in Danlí, Honduras known as El Cine Aladino. This theater was operated by Christian and Justo Eiroa’s grandfather. Today, Christian owns the Aladino factory, which is in the theater’s former location. Aladino is also the name that Julio Eiroa chose to name one of his brands. When Aladino was released, this was a brand positioned as delivering a classic, “old-fashioned” cigar experience reminiscent of those during the “golden age” between 1947 and 1961. 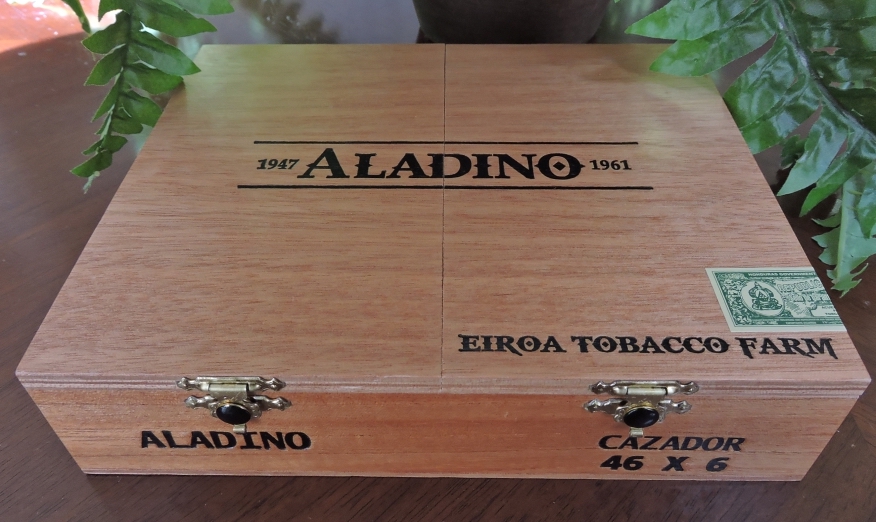 Without further ado, let’s break down the Aladino Maduro Cazador:

When the soft launch occurred last Friday, there were five sizes that were a part of it. All of these sizes were soft launched Company owner Justo Eiroa informed Cigar Coop that the Cazador, Robusto, and Toro sizes will be box-pressed releases when the Aladino Maduro goes into national distribution this year. The Cazador assessed here was a rounded parejo released late last year. 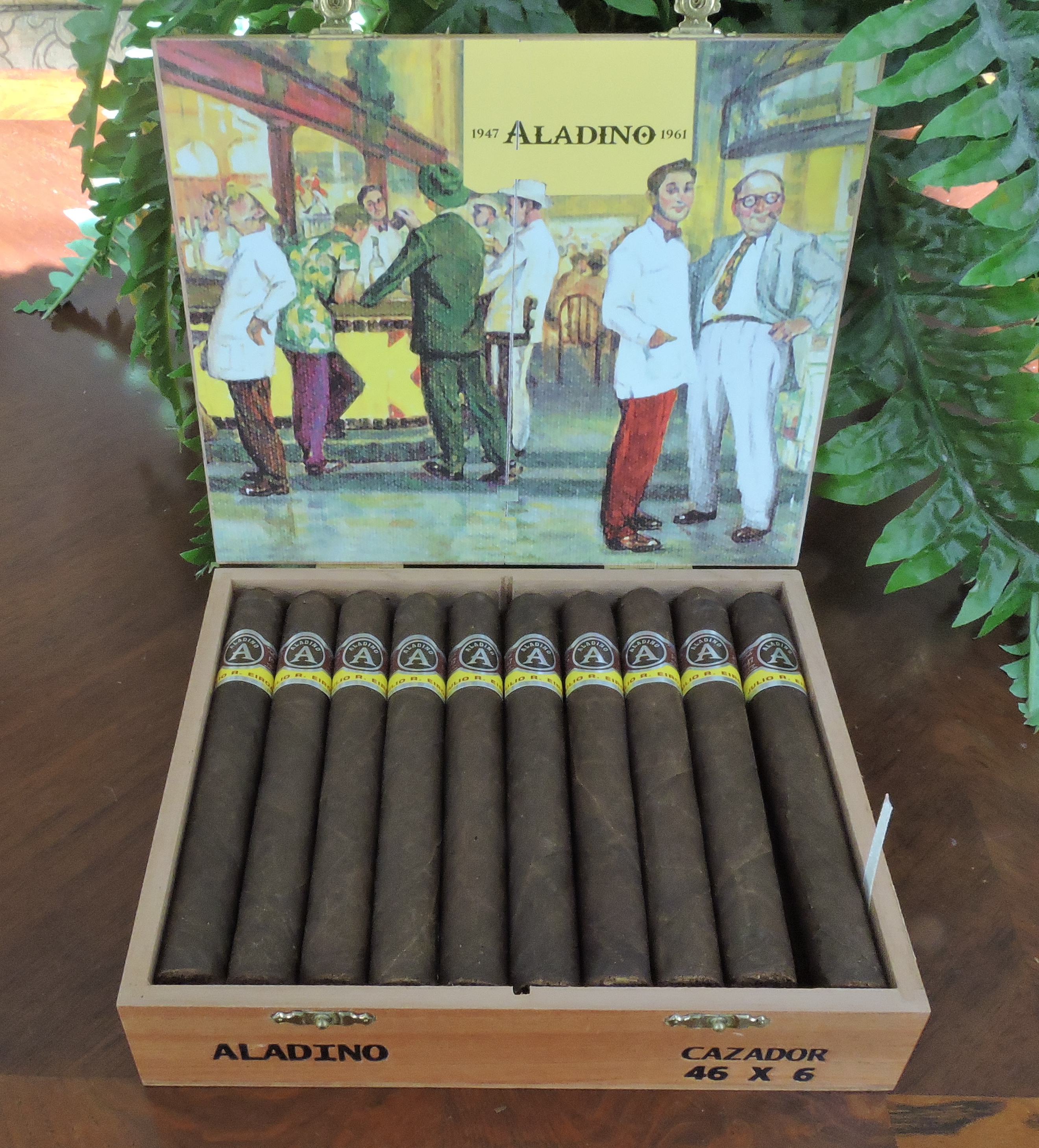 The San Andres Maduro wrapper of the Aladino Maduro Cazador has a dark coffee bean color to it. Upon closer examination, there was some subtle mottling on the surface of the wrapper. I didn’t find much in the way of oil on this wrapper. This was a relatively smooth wrapper for a San Andres. The visible veins and wrapper seams of this wrapper were on the thin side.

The Aladino Maduro features the same band found on the original Aladino. The front and center of the band features a brown circular field with silver trim. On that field is a large silver “A” with the text “ALADINO” arranged in a curved fashion above it. To the left of the circle is the text “1947,” while to right is the text “1961” – both in silver font sitting on a background consisting of a combination of brown and maroon. Sitting on that same row to the far right side is the text (also in silver font) “HECHO A MANO”. The lower portion of the band almost looks like a pseudo-secondary band. It is yellow in color with silver trim. The text “JULIO R. EIROA” appears in maroon font on that yellow background.

I commenced my experience with the Aladino Maduro Cazador by placing a straight cut to remove the cap of the cigar. After the cap was clipped I moved on to the pre-light draw. The dry draw delivered a mix of cocoa and fruit sweetness along with a slight amount of spice. I was quite pleased with the pre-light draw of this cigar. At this point, it was time to light up the Aladino Maduro Cazador and move on to the smoking phase.

The Aladino Maduro Cazador started out with notes of chocolate, fruit sweetness, cedar, and black pepper. Early on, the chocolate notes moved into the forefront. The other flavors settled in the background. In addition to being a secondary note on the tongue, the black pepper was also a flavor that was prominent on the retro-hale.

Later in the second third, some earth notes emerged and quickly displaced the mocha as the flavor. The earth notes remained the primary note for the duration of the smoking experience. This was balanced out by some notes of mocha, pepper, and some of the fruit sweetness in the background. As the Aladino Maduro Cazador came to a close, the cigar finished up with a slight soft nub that was cool in temperature.

The burn to the Aladino Maduro Cazador maintained a straight path from start to finish. There was a slight amount of curvature on the burn line, but I this didn’t result in additional touch-ups. The resulting ash was on the tight side with a salt and pepper color to it. The burn temperature was ideal. The burn rate seemed a tad faster than I would expect from a 6 x 46, but this didn’t result in any adverse effects. 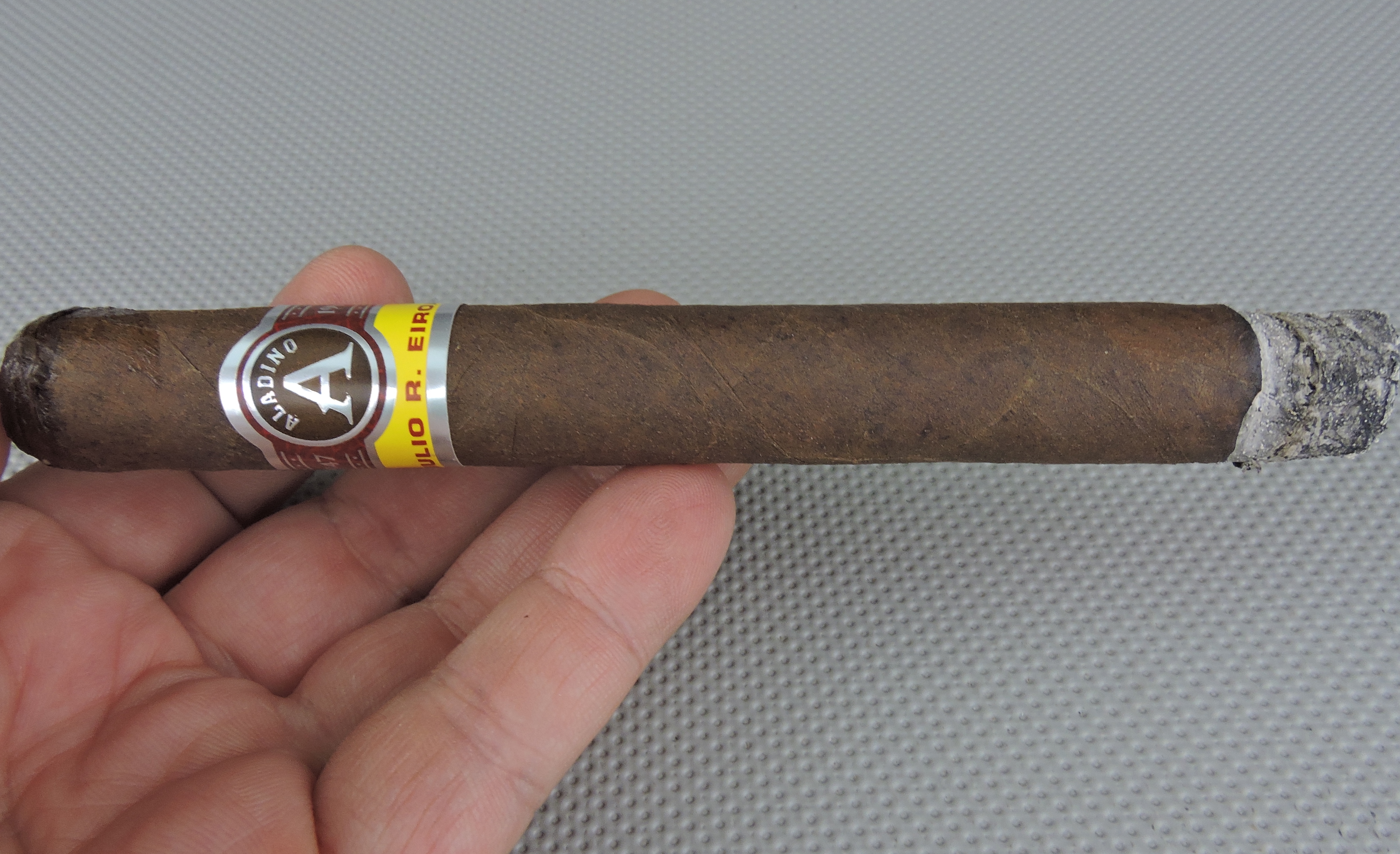 Burn of the Aladino Maduro Cazador

While I mentioned the burn was a little more rapid than I expected, this wasn’t due to an open or loose draw. I fact, I found the draw to the Aladino Maduro Cazador to have a sweet spot with just enough resistance to satisfy me. This also was a low maintenance cigar to derive flavors from.

In terms of the Aladino Maduro, I found it to be a medium strength and medium bodied cigar from start to finish. There was a slight increase in the intensity level of both attributes along the way, but in the end both attributes still remained in the medium range of the spectrum. Both the strength and body of this cigar balanced each other nicely with neither attribute overpowering the other.

Comparing this to the original Aladino Cazador, I found the Aladino Maduro Cazador to be slightly bolder in terms of strength and body.

The father and son team of Julio and Justo Eiroa have a winner with the Aladino Maduro Cazador. I’ve been smoking these cigars for the past 3 1/2 months and while it was ready for prime time when I first got it, this is a cigar that continues to get better with age. I would say if you smoke this right off the truck; you will get an enjoyable cigar, yet probably aren’t getting everything this blend will have to offer. In the end, I found the Aladino Cazador Maduro to be a little less old school than its natural counterpart, but still quite satisfying. It’s a cigar I could recommend to either a novice or experienced cigar enthusiast. As for myself, this is a cigar that I would smoke again – and it’s one that easily values a box purchase.