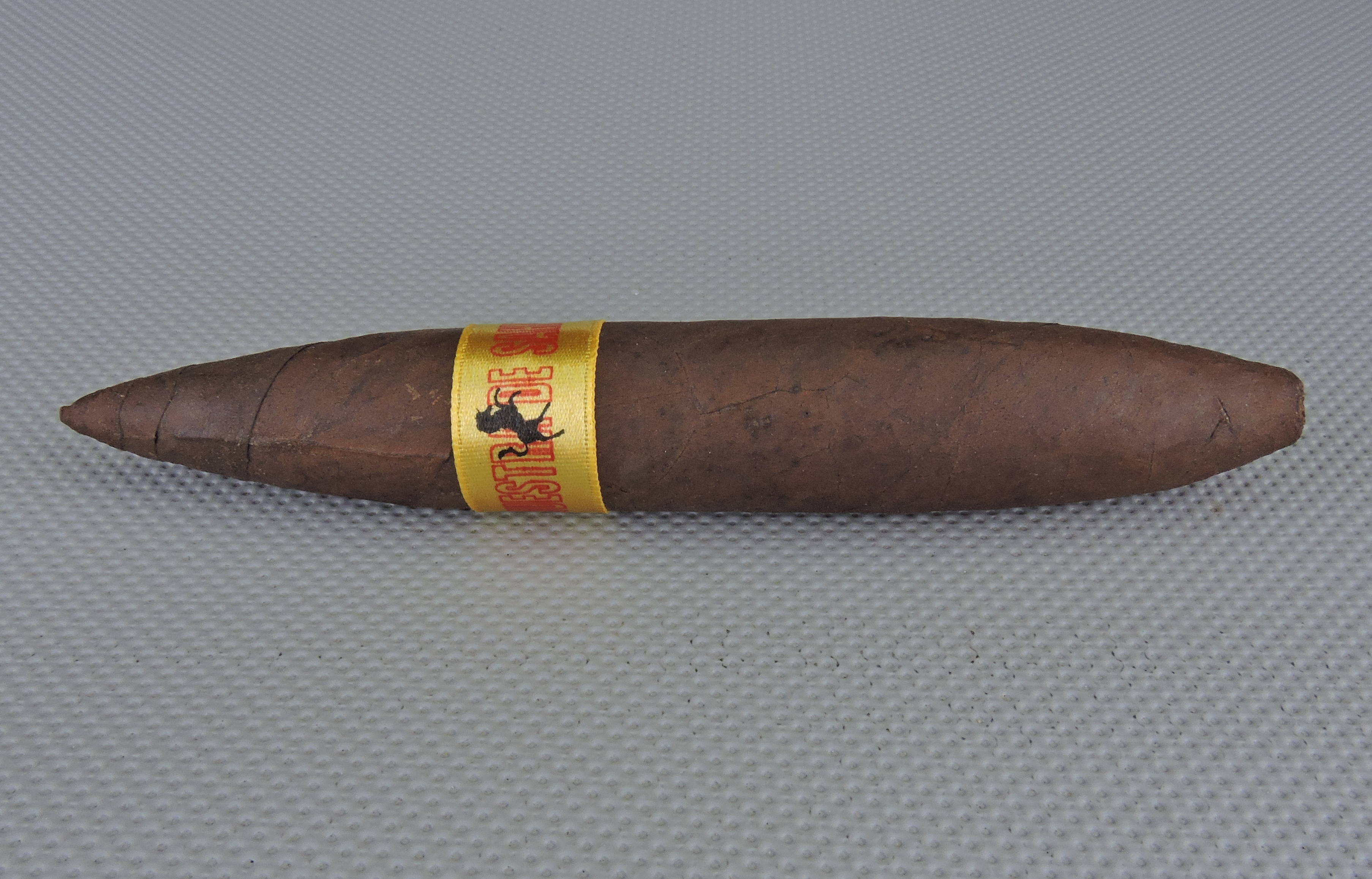 The term “Unicorn” has become a buzz word in the cigar industry. It refers to a cigar that is considered collectible and often difficult to obtain for various reasons. It was a name that Dunbarton Tobacco & Trust founder Steve Saka decided to use for his third installment of his Muestra de Saka series, the Muestra de Saka Unicorn. For the Unicorn, Saka decided to work on a project and spend as much money as possible to create a cigar. To make this project a reality, Saka would find some high quality tobacco to work with and use two of the best torcedors he could access to make this cigar. These pairs would roll a labor-intensive Diademas Deluxe vitola that would become the shape for the Muestra de Saka Unicorn. Saka would go on to produce 1,000 cigars for his Muestra de Saka Unicorn project and would ultimately set a suggested retail price of $100.00 per cigar. Earlier this year, these cigars were made available to select retailers, and on a very limited basis at events. Today I take a closer look and assess how Saka did with this project.


Muestra is the humble, common word for ‘sample’ in Spanish, however it takes on much more important, sometimes reverential, meaning when used in a handmade cigar factory. A muestra is the vision of the ligador and torcedor realized, it is the promise of a new experience and possibly the key to financial success for the fabrica. Muestras are hoarded and coveted by not only their makers, but by the cigar smokers who seek to catch a glimpse into the cigarmaker’s soul within their smoke. Muestra de Saka is just that. A line of unique blends and vitolas made in extremely limited quantities that reflect the blending machinations of myself. To smoke a Muestra de Saka is to embark upon a journey with me in which I greatly welcome your companionship.

In terms of the Unicorn project, Saka discussed some of the background of this on social media:

This is a Muestra de Saka Unicorn.

It is a very very very small project I undertook after having experienced smoking some of those $250 – $2,000 cigars that have been proliferated into the marketplace in recent years. Some by legit makers, others by not so legit imo.

So I went into this personal project with the concept of what if you did everything physically possible to spend as much money and effort as is humanly possible to make 1,000 ultra-ultra premium handmade cigars. 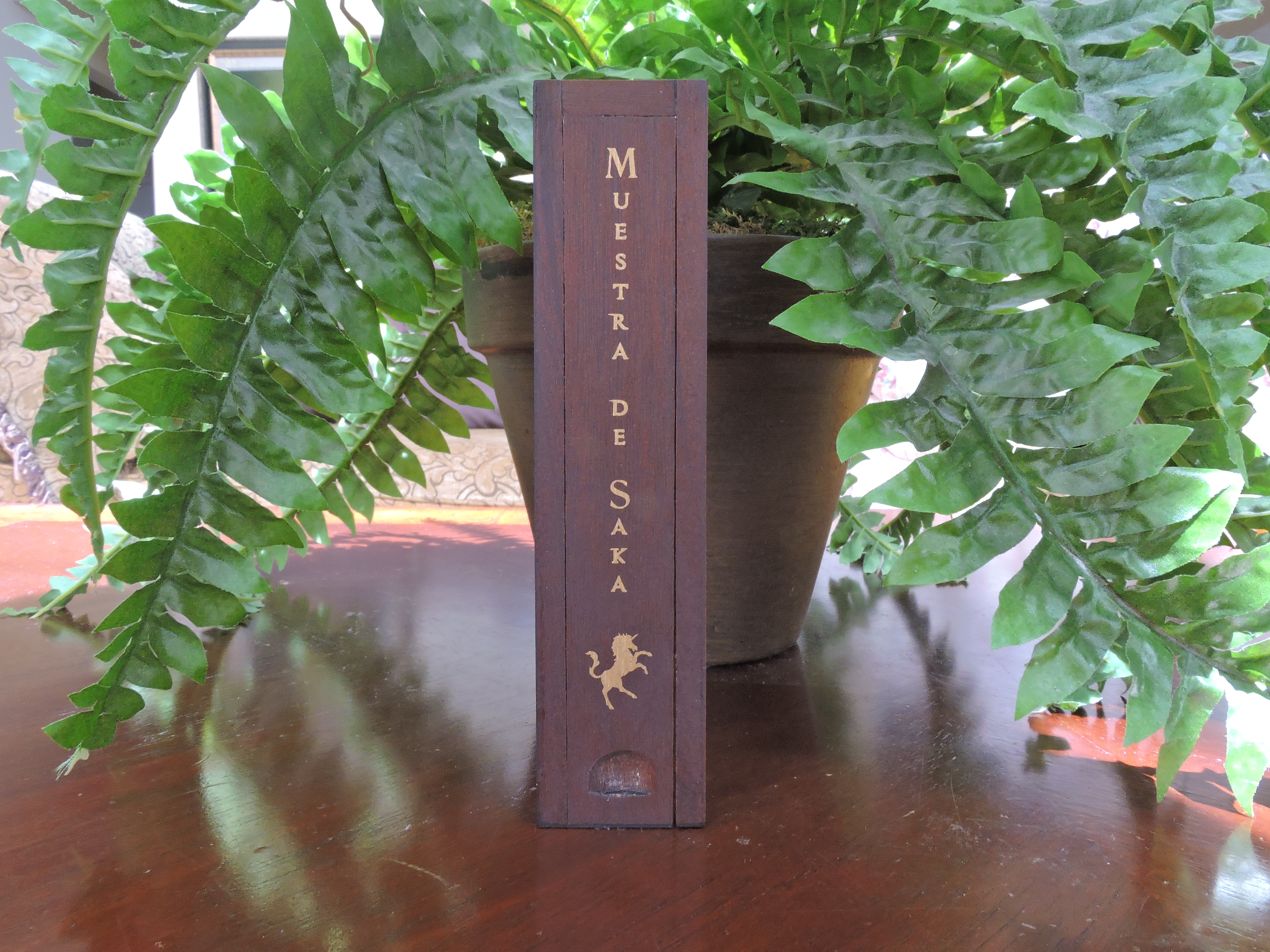 Without further ado, let’s break down the Muestra de Saka Unicorn and see what this cigar brings to the table.

According to Saka, he sorted through over 6,000 lbs of the best Broadleaf and Nicaraguan tobacco, only to use 1% of it for the Muestra de Saka Unicorn.

The vitola is a 6 1/2 x 60 Diademas Deluxe. Saka originally made the cigar shape out of hardwood on a lathe. This served as a prototype of the 24 custom molds required. The cigars were made at Joya de Nicaragua by the pair of Aristo Torres and Joseph “Chepita” Perez. Aristo has been making cigars since 1985 while Chepta has been involved since 1997 – resulting in over 50 years of combined experience. 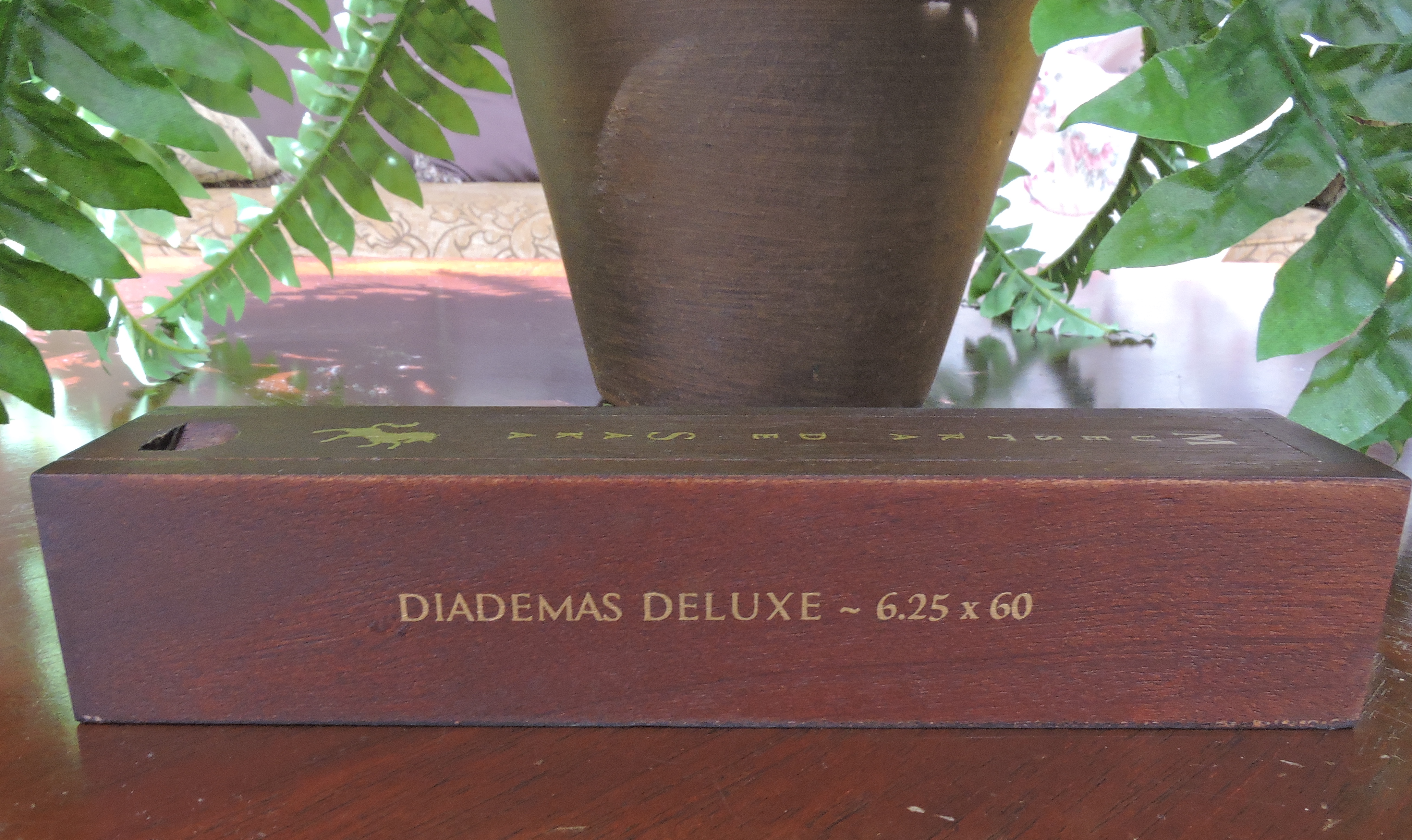 Side view of the Muestra de Saka Unicorn Coffin

Perhaps an interesting thing I did notice on the coffin was this UPC sticker that listed this as a “Sobremesa Diademas Deluxe”.  It was a reminder that Dunbarton Tobacco & Trust might still have plans to release its Sobremesa blend in this size.

The Connecticut Broadleaf wrapper of the Muestra de Saka Unicorn still had some of the ruggedness associated with Broadleaf tobacco, but I think it’s fair to say that this cigar’s wrapper was relatively smooth for a Broadleaf wrapper. This Broadleaf wrapper had a classic roasted coffee bean color. Upon closer examination, there was some mottling on the surface of the wrapper. There were some visible veins and any visible wrapper seams were quite thin. The Diademas Deluxe had a shape that featured a steep taper that converges as a sharp tip at the head of the cigar. The tapering is less steep toward the footer, but there still is an open footer. 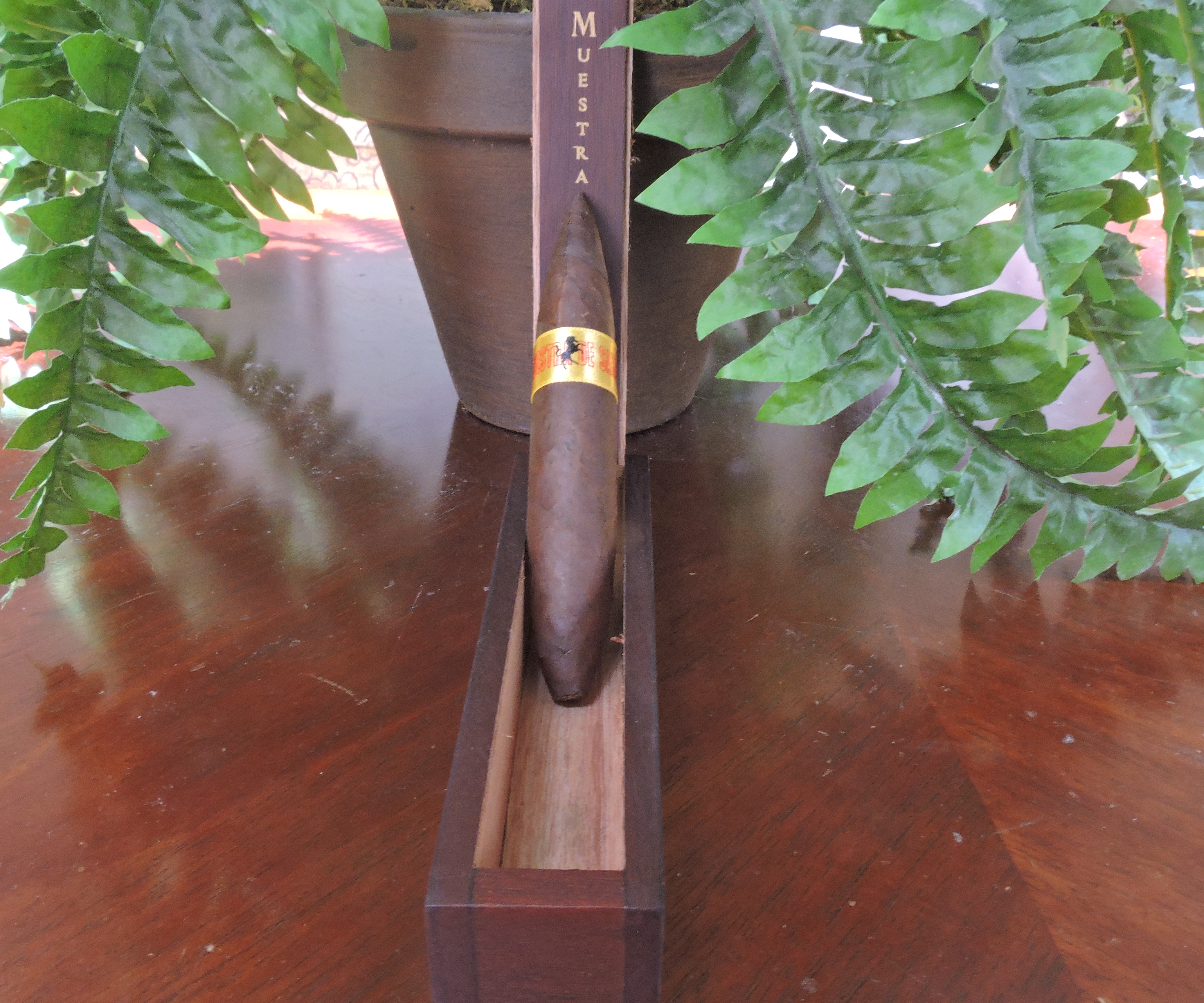 Like the Exclusivo and Nacatamale installments of the Muestra de Saka, the Unicorn also uses a yellow ribbon. While the ribbon is on the footer of the Exclusive and Nacatamale, it is at the center of the Diadema of the Unicorn. The ribbon contains the text “MUESTRA DE SAKA” in a red stencil font. In the middle of the text is a silhouette of a unicorn.  While I admit I would have rather seen a more ornate band for this ultra-premium cigar, packaging and appearance are not factored nor scored in Cigar Coop assessments, so there is no loss of points here.

As I typically do for figurado cigars, I used a straight cut to remove the tip of the Muestra de Saka Unicorn. For this cigar, I used my Credo Special T cutter with the 36 ring gauge hole to get an ideal cut. This allowed me to get a smaller ring gauge cut and to take advantage of the tapering of this cigar. I then moved on to the pre-light draw. The cold draw delivered notes of dark chocolate, espresso, and a slight tingly spice. My first impressions of the Unicorn were quite impactful as I felt this was an excellent pre-light draw. At this time I was ready to light up my Unicorn and see what the smoking experience would have in store.

Once lit, the Muestra de Saka Unicorn started out with a short spurt of white pepper. This gave way to notes of dark chocolate and coffee. A lot of times when chocolate and coffee notes fuse, I refer to it as mocha, but these notes were separate and distinct – and remained that way for the duration of the smoke.  On the other hand, in the background, there was a nice fusion between caramel sweetness and mixed fruit. Meanwhile, the white pepper quickly transitioned to a classic black pepper. This black pepper was subtle on the tongue but more prominent on the retro-hale.

The first third saw the coffee notes grounded in the forefront. From time to time, the dark chocolate notes surfaced as a primary note as well. Meanwhile, the caramel-fruit and black pepper remained as secondary flavors.

The second third of the Muestra de Saka Unicorn saw the caramel-fruit note transition to more of a sweet citrus note. This citrus note increased in intensity and by the midway point, it displaced the coffee notes as the flavor. While the dark chocolate notes settled in the background with the black pepper, the pepper notes were increasing on both the tongue and retro-hale.

As the Muestra de Saka Unicorn moved into the last third, I found some earthy notes took over as the primary note. There was now a definite spicy kick during this stage of the cigar as the pepper closed in on the forefront. While the coffee notes were pretty much gone, there still were notes of chocolate and citrus present. This is the way the Muestra de Saka Unicorn came to a close. The resulting nub was firm to the touch and cool in temperature.

For the most part, the burn to the Muestra de Saka Unicorn maintained a straight burn path, but there was some jaggedness along the way. At times, this did require some additional touch-ups.  The resulting ash was silver-gray in color. This wasn’t the firmest ash, but it wasn’t a loose nor flakey ash. The burn temperature was ideal. The burn rate was slow, and I actually found that to be a positive in this case as it lengthened the cigar experience. 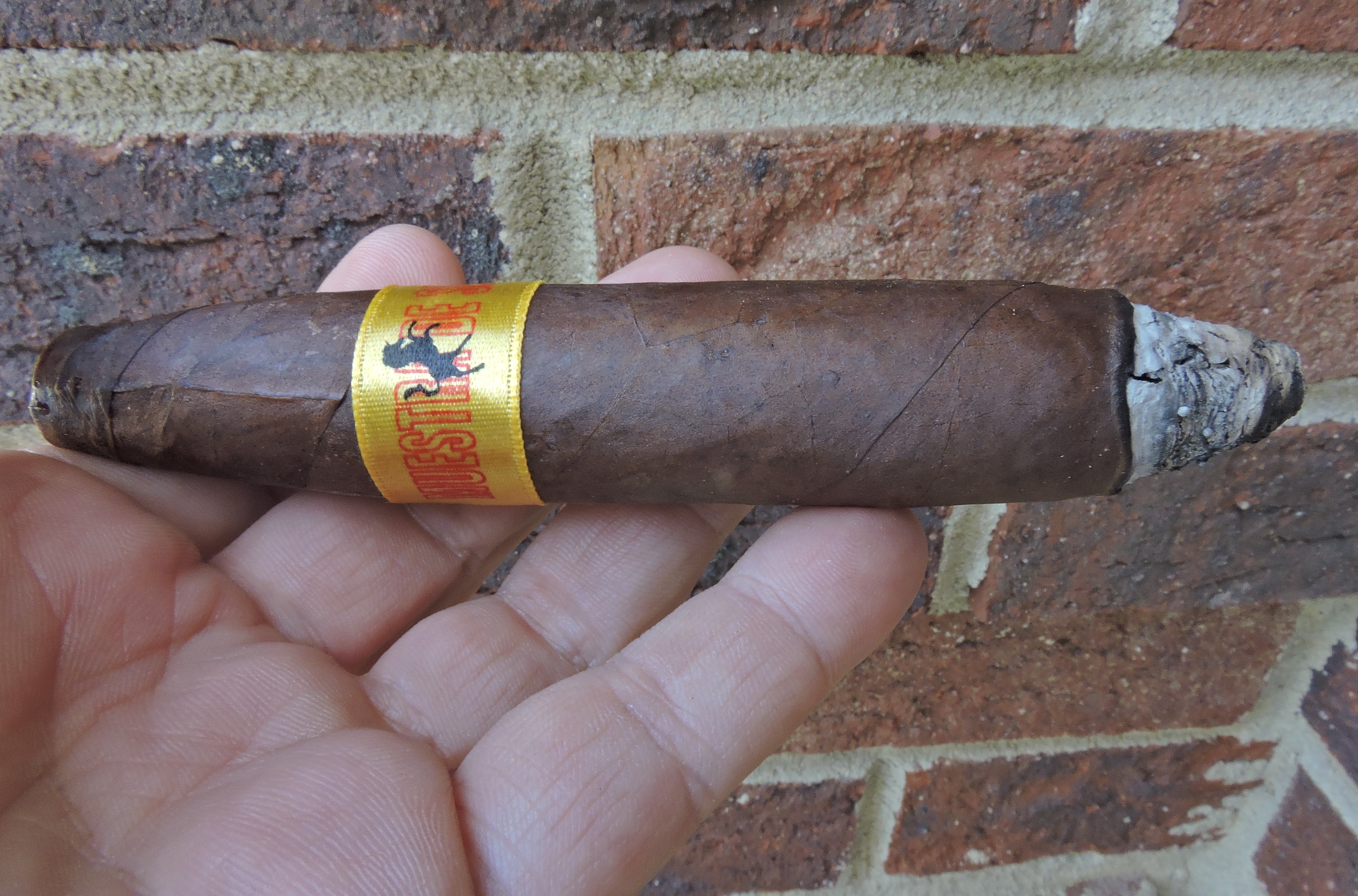 The draw to the Muestra de Saka Unicorn was as good as one I have had on a diadema or perfecto. This draw had a touch of resistance to it – which is something that I like. At the same time, this was a cigar that was quite easy to derive flavor from. I also found the Unicorn produced ample amounts of smoke.

The Muestra de Saka Unicorn is a bold smoke. Right out of the gate, I found this cigar delivered medium to full strength and medium to full-bodied flavors. Just past the midway point, I found both attributes progressed into full territory. There was still a gradual increase in intensity in the latter part of the second half, but the strength and body never got to the point where the cigar was going to knock me down.

As for strength versus body, I found both attributes balanced each other nicely with neither overshadowing the other.

In terms of Question 1 (how good is this cigar?), Saka said he went into this project with the goal of spending as much as possible to produce the cigar. One thing is clear, he didn’t cut corners on the tobacco. He has blended one of his best Connecticut Broadleaf blends to date. Flavor-wise, the first half of this cigar simply epic.  The second half was still above average, but not at the epic level of the first half.  Very simply, this cigar is very good and one can make the argument it’s his best work since leaving Drew Estate to date.

Question 2 is a tricky one. I said this when I reviewed another cigar than was selling for $100+ (at the time), the Padrón 50th Anniversary Maduro and commented: “no tobacco product fits that price point.”  I’ll stand by that statement as well. While I said the Unicorn was some of Saka’s best work since leaving Drew Estate, he still has done some very good work with Todos Los Dias, Mi Querida, and Sobremesa. One can argue, you can still get some very high quality Dunbarton Tobacco & Trust smokes for a lot less money.

Overall on merit, this cigar scores quite well. In terms of the value rating, I feel this cigar is good enough that it earns the “Fight Chuck Norris for Them” rating – mainly because when you get into a high-value rating like the Chuck Norris level, price becomes less of a factor. In summary, if you’re willing to spend $100.00 and go through “the chase” for this Unicorn, you will get a really good cigar.