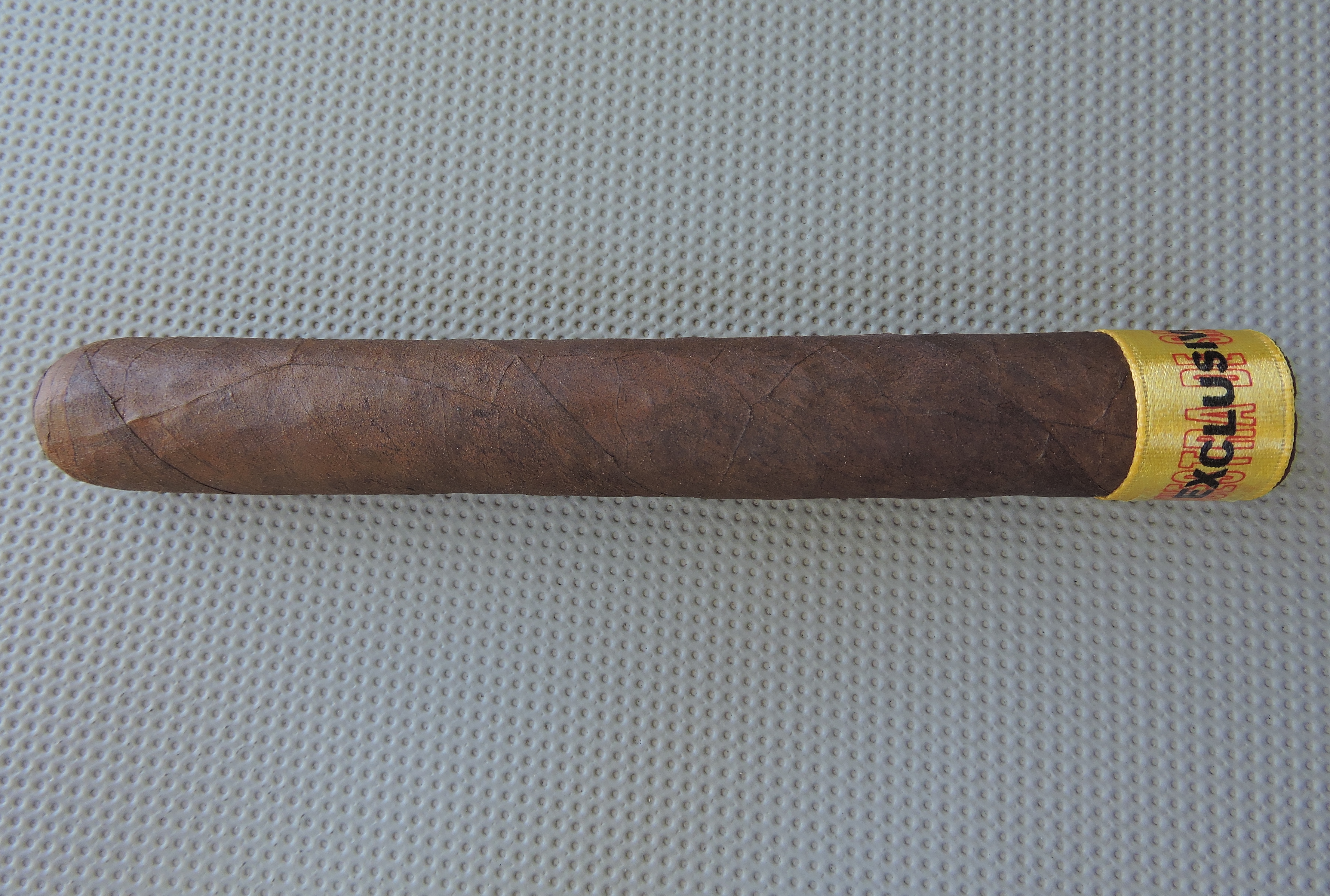 At the 2016 IPCPR Trade Show, Steve Saka’s Dunbarton Tobacco and Trust (DTT) had two new products it was actively launching. The first was the Mi Querida line – Saka’s Connecticut Broadleaf offering. The second was two “poco mas intensa” line extensions to the Sobremesa. At the same time, there were several other new lines that DTT had available in extremely limited quantities. At that time, these other new lines were being offered in order to have them introduced to the market before the U.S. Food and Drug Administration (FDA)’s August 8, 2016 regulatory deadline. By introducing these cigars prior to that date, DTT would have an extra two years to seek FDA approval on whether to keep them on the market. One of those new lines was Muestra de Saka. Today we take a look at one of the offerings under the Muestra de Saka line – the Muestra de Saka Exclusivo. This was the first widespread release under the Muestra de Saka line. Since returning to the cigar industry in 2015, Saka has been delivering some of his best blends to date. The Muestra de Saka Exclusivo continues to build on his excellent body of work.

Muestra de Saka stands for “Samples of Saka”. It is a line that follows a one-blend, one-size model. In some ways, you can draw an analogy to this line for what he did with the Liga Privada Unico Serie at Drew Estate. While the Unico Serie releases were to some extent permutation based off the Liga Privada No. 9 and Liga Privada T52 blend, the Muestra de Saka line goes wider. It not only meant to wider selection of blends, but it represents blends that Saka considers to be a personal challenge.

MdS (Muestra de Saka) is a line of individual batch produced cigars. Each cigar within the line is a unique vitola and liga – no two are the same. Their taste, body, strength, materials, etc. will vary widely. As will their individual concept or premise.

The basic idea behind the line is they are a personal blending challenge for myself. Trying to create something out of leaf I do not typically work with, sometimes in a size I don’t typically like to smoke, or a style of cigar that I rarely find favor with. They are are me trying to broaden my own horizons and see if I can make something of note. Basically, they are me stepping out of my own comfort zone.

They are packed in individual coffins, as my thought behind the line is that most consumers who are curious will buy one, maybe two, to try. Basically join me in smoking my personal experiments and then comment on them: positive, negative and in between. I never envisioned it becoming a daily for anyone.

The first in the series was the 6 x 52 Exclusivo. It was me trying to make a creamier, milder cigar, but utilizing only Nicaraguan leaf and from some of the farms in the country best known for their STRONG tobaccos… so the challenge was: can I make a mild cigar out of tobacco that is notoriously known for being potent. 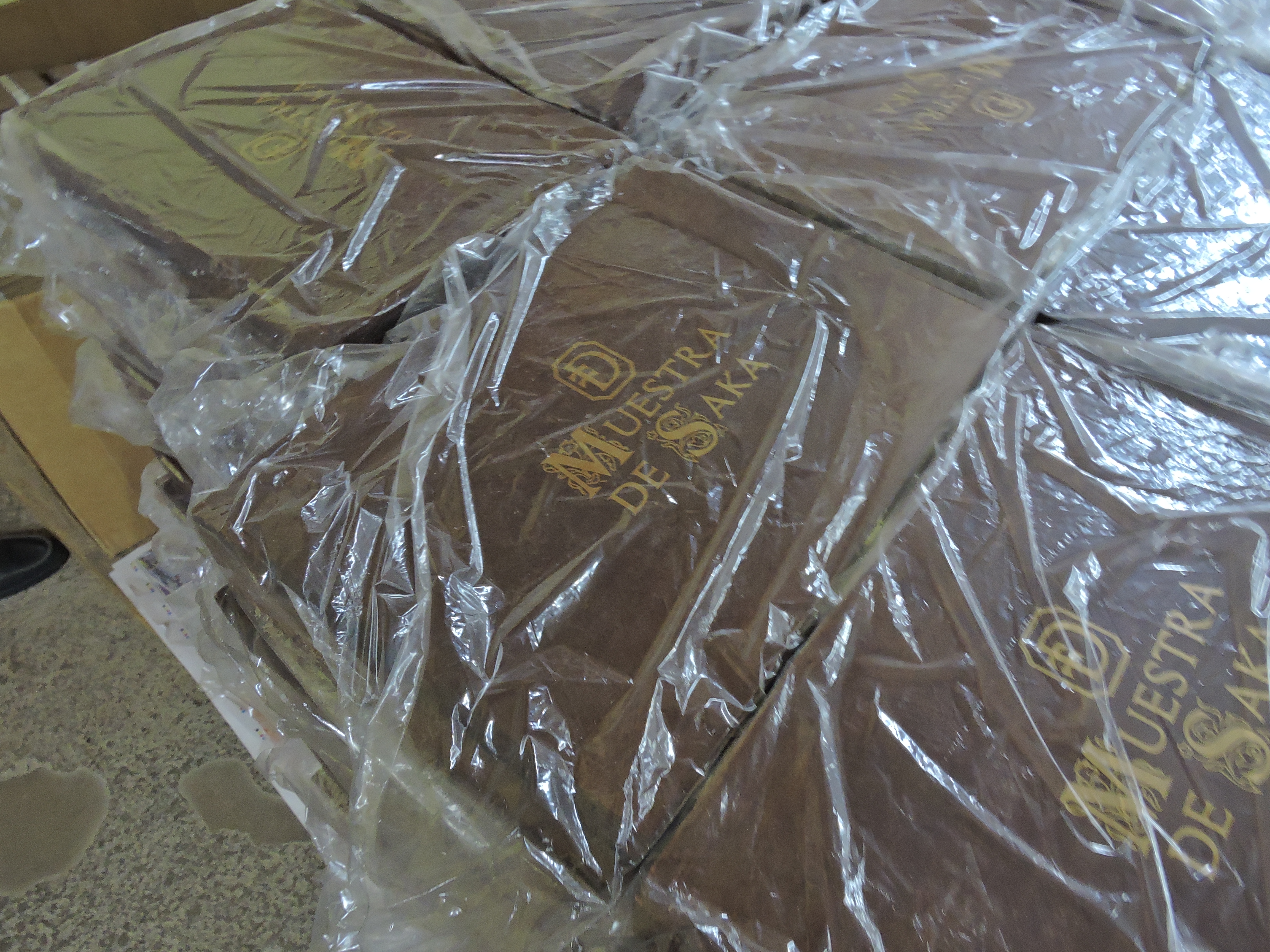 Without further ado, let’s take a closer look at the Muestra de Saka Exclusivo and see what this cigar brings to the table.

As mentioned above, each Muestra de Saka Exclusivo is packaged in an individual unpainted coffin with seven coffins packaged per box. 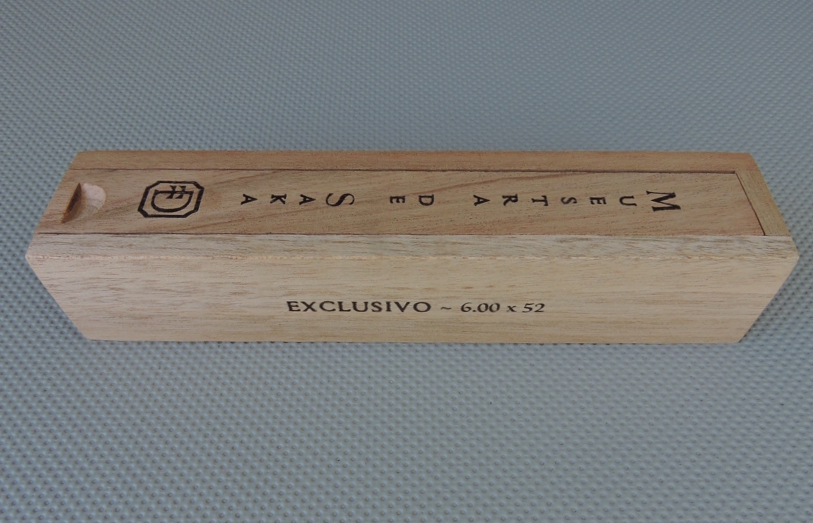 At press time, Saka is getting ready for his second widespread release in the Muestra de Saka line – the Muestra de Saka Nacatamale. This is a 6 x 48 Short Churchill size. While he hasn’t disclosed the full blend components we know the filler and binder come from one small independent farm in Jalapa, Nicaragua.

The Muestra de Saka Exclusivo features a roasted coffee bean colored wrapper. Upon closer examination, some darker mottling can be seen on the wrapper. This wrapper also had a light coating of oil. I would assess this wrapper as being quite smooth with only some thin visible veins and thin visible wrapper seams. The Exclusivo also has a firm pack that gives the cigar some weight.

The Muestra de Saka Exclusivo does not feature a paper band. It uses a yellow ribbon on the footer. The ribbon contains the text “MUESTRA DE SAKA” in a red stencil font. Layered over that text is the text “EXCLUSIVO” in black font.

After removing the ribbon from the footer of the Muestra de Saka Exclusivo , I placed a straight cut to remove the cap. Once the cap was removed, I moved on to the pre-light draw phase. The cold draw delivered a mix of chocolate, cedar, earth, and black coffee. Overall I considered this to be a satisfactory pre-light draw. At this point, I was ready to light up the Muestra de Saka Exclusivo and see what the smoking experience would have in store.

Note: I actually placed the ribbon back over the cap while smoking. This is strictly a personal preference I do so it doesn’t feel like I am smoking an unbanded.

Out of the gate, the Muestra de Saka Exclusivo delivered a mix of chocolate, nut, earth, dried fruit, and black pepper. The earth, chocolate and nut flavors moved to the forefront early on. Meanwhile, the dried fruit and black pepper settled into the background. The chocolate and dried fruit delivered a nice (but not overpowering) amount of sweetness. During the first third, there was a nice creamy texture to the flavors that kept the cigar quite smooth. At the same time, there was a combination of cedar and white pepper on the tongue.

As the Muestra de Saka Exclusivo moved through the second third, some of the sweetness and creaminess began to decrease. In particular, the earth notes began to get more prominent while the chocolate notes began to take on more of a secondary role while the nut dissipated. Once the Muestra de Saka moved past the midway point, the earth notes were firmly grounded as the primary note. Meanwhile, the pepper notes started out quite distant at the beginning of the second third, but just past the midway point they started to increase in intensity – and I soon picked up some additional cedar notes. Finally, during this stage, the creaminess began to diminish.

By the last third of the Muestra de Saka Exclusivo, while the earth notes were still prominent – the cedar and pepper spices closed in on the forefront. At the same time, the spices were not overpowering. Meanwhile, there still was a small amount of chocolate and fruit sweetness in the distant background. The creaminess present early on was now gone. This is the way the Muestra de Saka Exclusivo came to a close. The resulting nub was firm to the touch and cool in temperature.

From a construction standpoint, the Muestra de Saka Exclusivo is a well-made cigar and this is reflected nicely on the burn and draw. The Muestra de Saka had no problem maintaining a straight burn path. There was a slight amount of curviness on the actual burn line, but this really didn’t result in any additional touch-ups needed for the Exclusivo. The resulting ash was tight and firm with a near white color. Meanwhile, the burn rate and burn temperature were ideal. 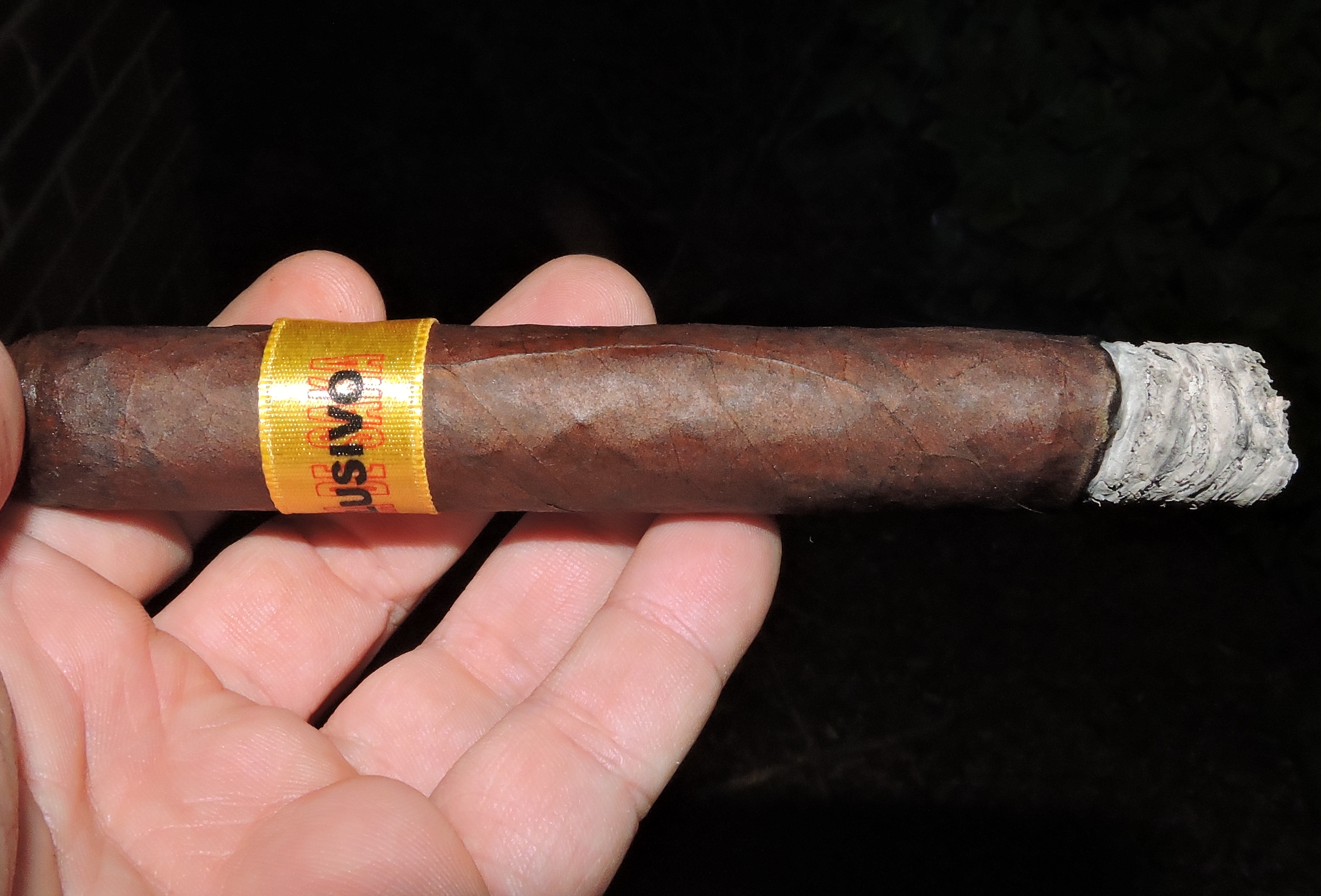 Burn of the Muestra de Saka

The draw performed quite well. It had a touch of resistance to it – which is something that I like. This made the Muestra de Saka an enjoyable cigar to puff on from start to finish.

Saka talked about the Muestra de Saka Exclusivo being a “milder” cigar. I wouldn’t categorize the Muestra de Saka Exclusivo as being “mild”, but in terms of strength and body it’s definitely a “medium”.  The strength and body pretty much stayed in the medium range without much variance. I also found both attributes balanced each other nicely – with neither overshadowing the other.

There is a lot to like about the Muestra de Saka Exclusivo. It’s a cigar that does a very nice transition from creamy sweetness early on to a more spicy profile toward the end. Some people I talked to have expressed a desire for this cigar to be fuller in terms of strength and body. I couldn’t disagree more. The Exclusivo’s medium profile works perfectly with the flavors delivered. I am curious to see what the Muestra de Saka Exclusivo does with some longer term aging. My gut tells me it will respond nicely.

This is a cigar I would recommend to a novice or experienced cigar enthusiast. It is one I would smoke again. Even though it has a near $15.00 price point, it is worthy of picking up the 7-count box in my book.