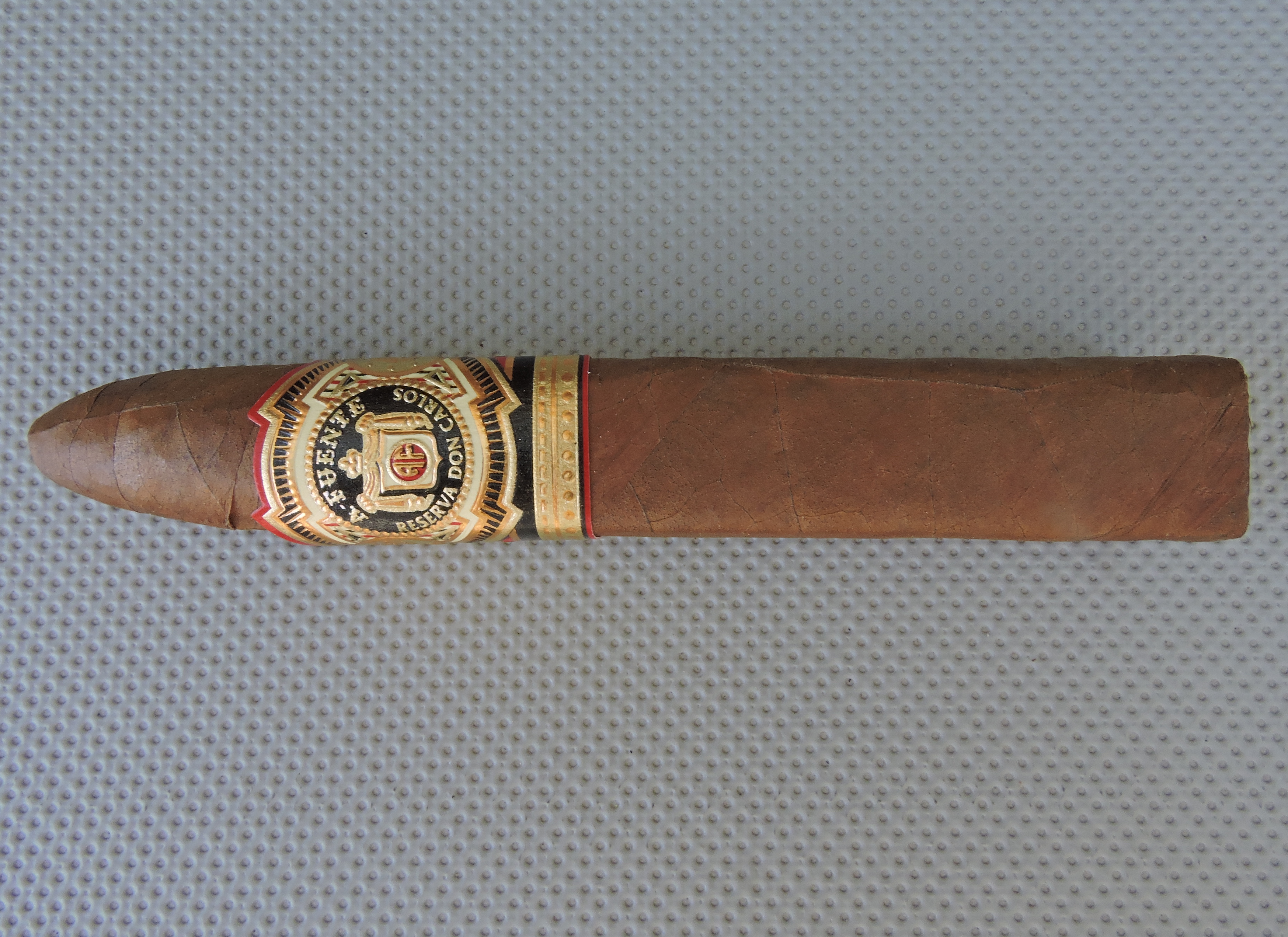 The Shark is a unique vitola. It is a mostly box-pressed cigar, but toward the end, the cigar becomes rounded to a belicoso tip. This size has been made famous throughout the Arturo Fuente portfolio. Most notably, this is a popular size in the Arturo Fuente Anejo line with the Anejo No.77 Shark. Because it is a labor-intensive size to produce, the Shark is something that is produced in limited qualities. Add winning the top prize from Cigar Aficionado and the Eye of the Shark has become one of the most sought-after cigars by Arturo Fuente in recent memory. Even its sibling cigar, the Don Carlos Personal Reserve Robusto, hasn’t been the easiest one to find.

Don Carlos was the name that Carlos Fuente Sr. was often called. Fuente Sr. passed away on August 6, 2016.

Note: At press time, retailers had been reporting receiving shipments of the Eye of the Shark. This cigar was purchased back in January 2018, shortly after Cigar Aficionado named Eye of the Shark its Cigar of the Year for 2017.

Without further ado, let’s break down the Arturo Fuente Don Carlos Eye of the Shark and see what this cigar brings to the table

The Arturo Fuente Don Carlos Eye of the Shark is highlighted by a Cameroon wrapper over a Dominican binder and filler. While the Don Carlos Personal Reserve Robusto has a similar selection of tobaccos, the two cigars contain different blends.

As mentioned the “Shark” vitola is a unique box-pressed cigar with a rounded belicoso tip. The Don Carlos Eye of the Shark is a 5 3/4 x 52 – which is actually smaller than some of the other Shark vitolas (most notably the Anejo No. 77 Shark  which measures 5 7/8 x 64).

The Eye of the Shark comes packaged in 20-count boxes. 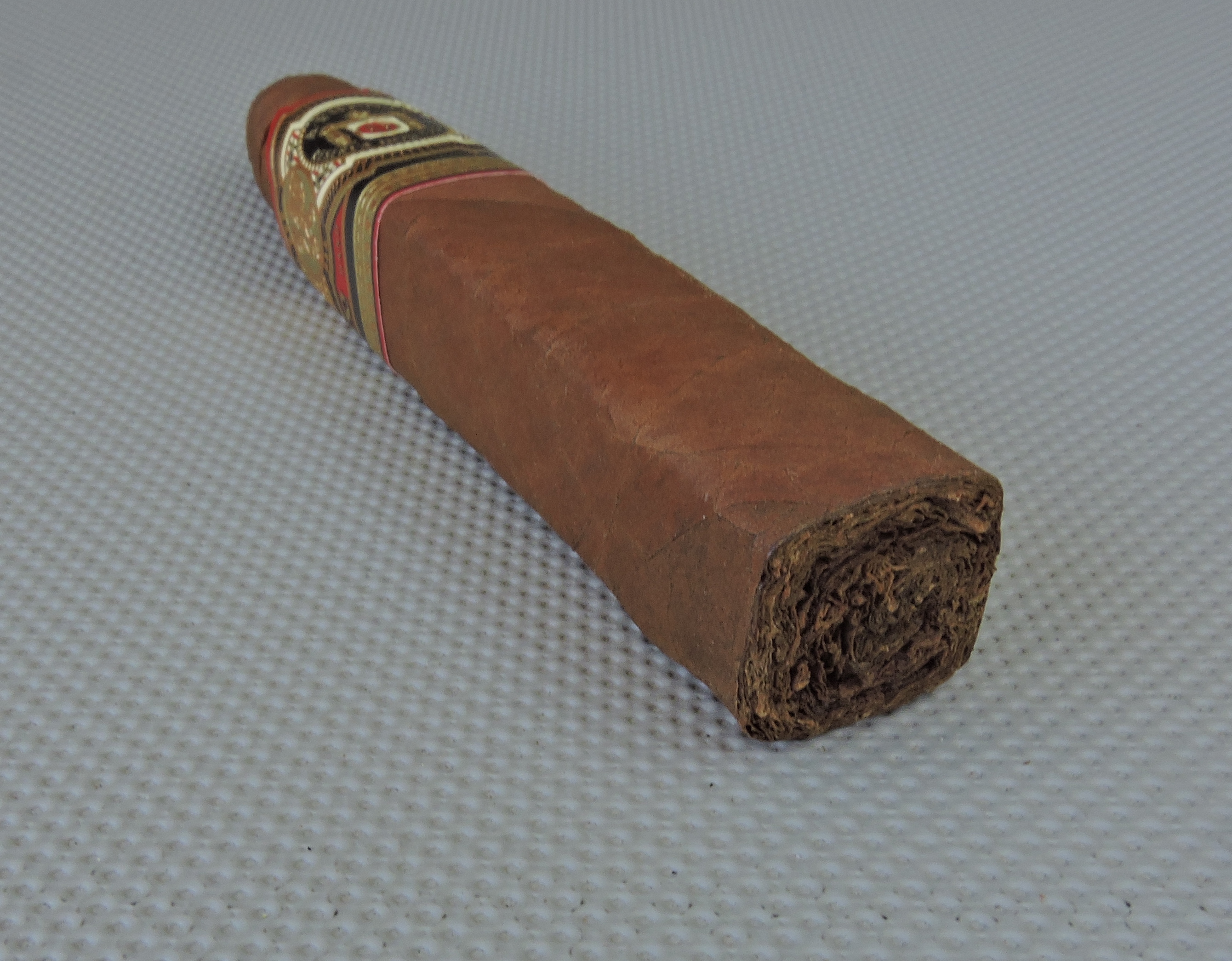 The Cameroon wrapper of the Don Carlos Eye of the Shark had a medium brown color to it. Depending on how the light hits it, it might give off a slight Colorado red tint. This wrapper had a silky complexion with a slight coating of oil. The surface of the wrapper was quite smooth. Any visible veins were quite thin, and most of the wrapper seams were also well hidden. The cigar itself had a sharp square press up until the band area where it transitioned to its rounded figurado tip. 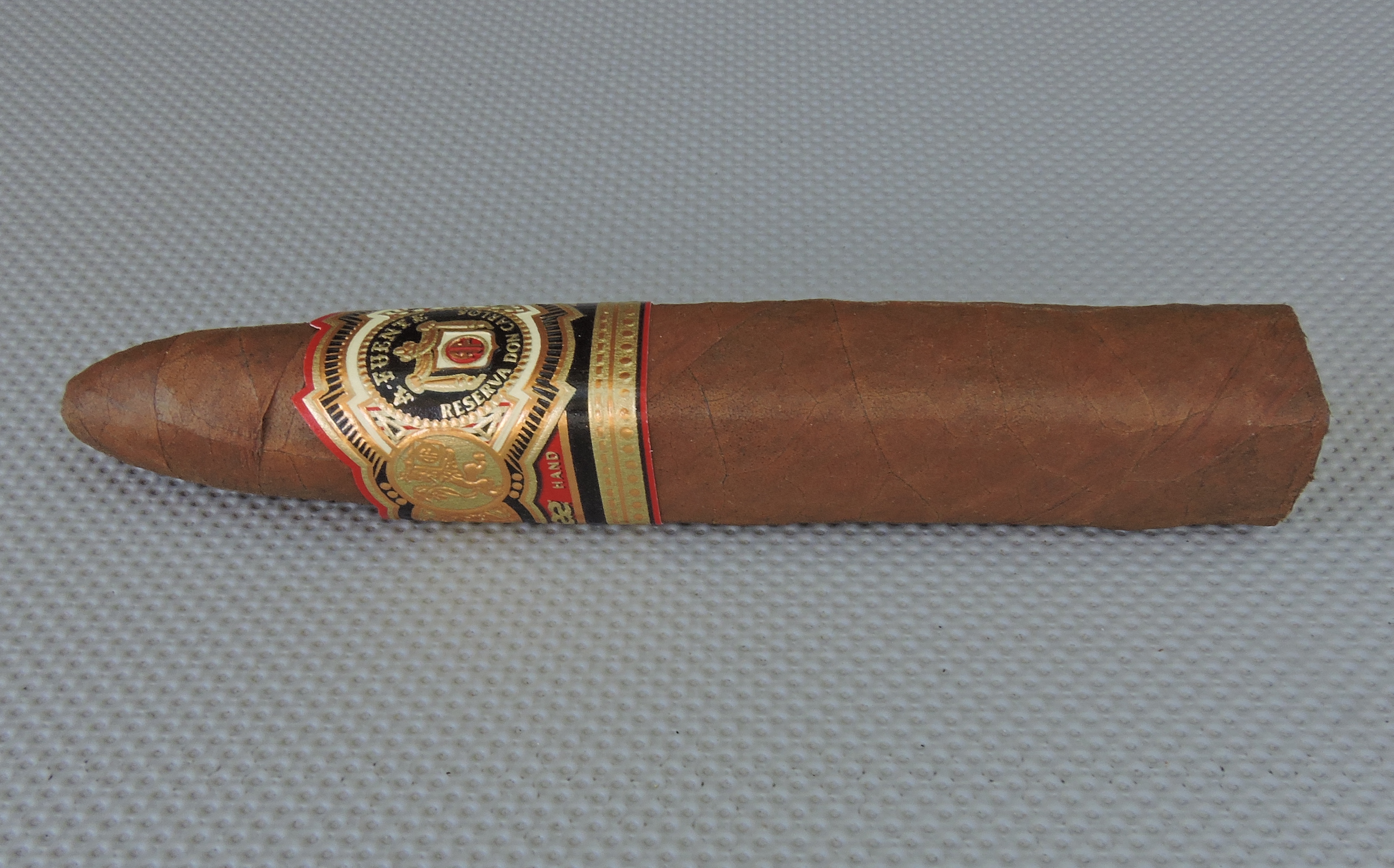 Arturo Fuente Don Carlos Eye of the Shark – Side View

The band for the Eye of the Shark is a variation of the classic Arturo Fuente Cigar band, but featuring a red, gold, and black color scheme. The band features a white shield in the middle with the letters “AF” in gold font sitting on a red circle in the middle of the shield. The shield is surrounded by gold and sits on a larger black circular background. In gold font is the text “A. FUENTE” and “RESERVA DON CARLOS” on the top and bottom of the black circular background. There are a variety of gold adornments that surround the red circular background. The lower left and lower right of the band features the text “HAND” and “MADE” respectively – both in gold font sitting on a red background.  The far right features a red circle with a gold font “AF” that serves as a band fastener. The lower part of the band contains gold striping. Finally, the upper and lower edges of the band contain red trim.

Prior to lighting up the Don Carlos Eye of the Shark, I kicked things off with a straight cut. For this cigar, I used my Credo Special T cutter with the 36 ring gauge hole to get an ideal cut. This allowed me to get a smaller ring gauge cut and to take advantage of the tapering near the cap of the cigar. From that point, I moved on to the pre-light draw. The cold draw delivered a mix of earth, cedar, and a slight floral note. I considered this to be a satisfactory pre-light draw. At this point, I was ready to toast up the Eye of the Shark cigar and enjoy the smoking phase.

The Don Carlos Eye of the Shark started out with notes of dusty earth, cedar, black pepper, and lemon rind. Early on the cedar and earth notes became primary with the lemon rind and black pepper settling in the background. As the Eye of the Shark moved through the first third, notes of natural tobacco and nuts also surfaced in the forefront with the earth and cedar. Meanwhile, there was an additional layer of black pepper and a slight amount of cedar on the retro-hale.

During the second third, the natural tobacco and cedar notes continued to be the primary notes. The lemon rind notes were now a close secondary note. While both black pepper and earth notes remained in the background, there was a slight increase int he black pepper on the tongue.  The nut flavors that were present early on dissipated.

The last third saw the Eye of the Shark take on a very cedary profile. The natural tobacco greatly diminished. There still were notes of earth and lemon rind present as well. This is the way the Don Carlos Eye of the Shark came to a close. The resulting nub was firm to the touch and cool in temperature.

For the most part,  Don Carlos Eye of the Shark maintained a straight burn path. There was a slight curvature on the burn line from time to time. There were two points where I thought the burn line required a little extra TLC to get through – at the very beginning  and at the point where the cigar transitioned from box-pressed to the rounded format. Meanwhile, the resulting ash had a silver color. This was relatively firm ash. As for the burn rate and burn temperature, both were ideal. 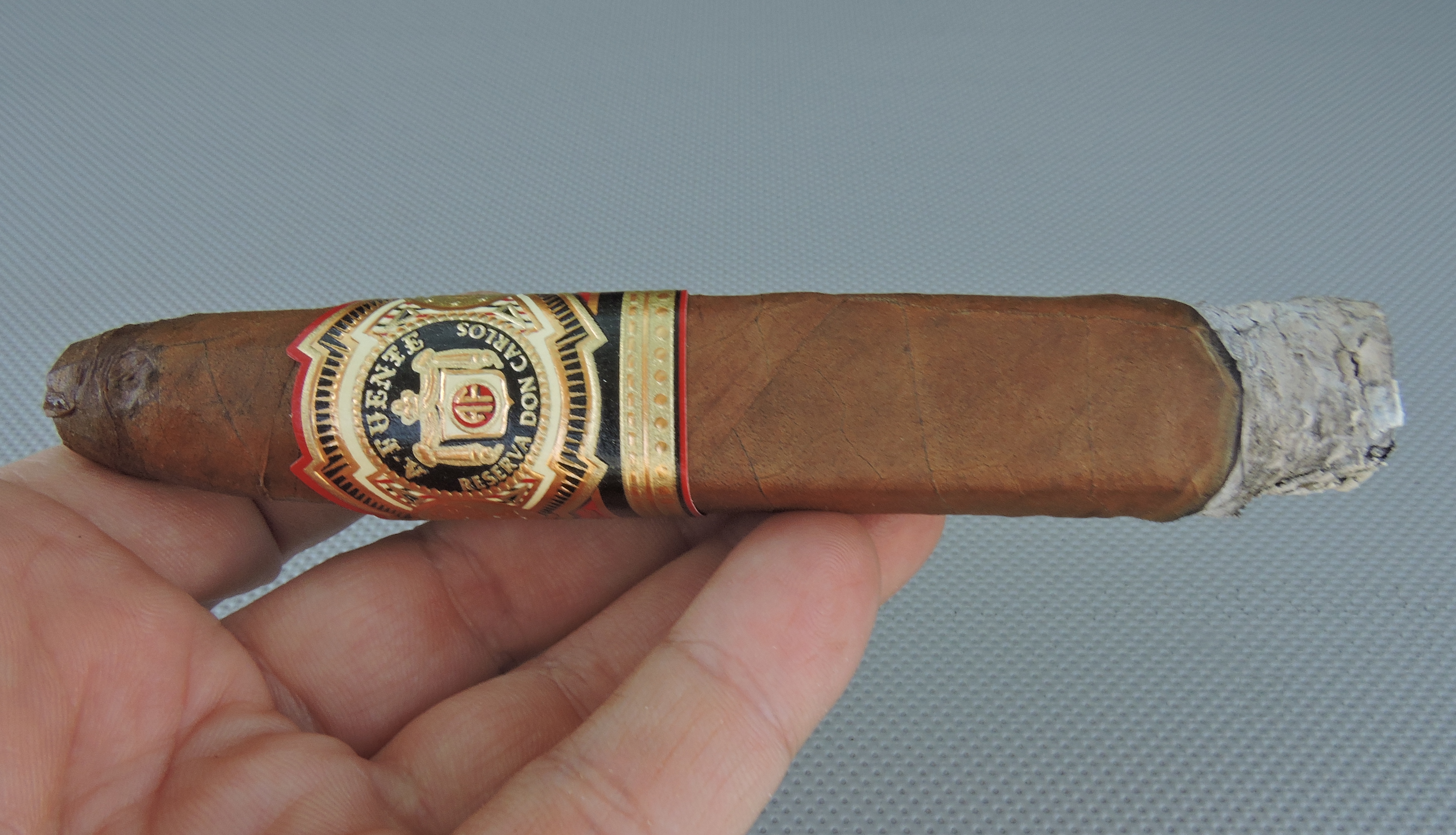 Burn of the Arturo Fuente Don Carlos Eye of the Shark

The draw to the Eye of the Shark earns our highest score – exceptional.  The draw of this cigar had a touch of resistance to it – which is something that I like. I also like how the tapered head did not get soft during smoking.

The Eye of the Shark is a cigar that is on the milder side – and it was one I found considerably milder than the Don Carlos Personal Reserve Robusto. This is a cigar that started out mild to medium in both strength and body. Along the way, there was a slight uptick in the intensity level of both attributes and by the midway point, it was enough to push the strength and body into the lower end of medium territory.

During the smoking experience,  I found the body had a slight edge over the strength.

The Arturo Fuente Don Carlos Eye of the Shark is a cigar that I thought started out excellent, but along the way, I found it lost some of the “wow factor”. In particular this cigar had a lot of transitions, however, the cedary last third just wasn’t how I was expecting this cigar to close out. Personally, I would reach for the Eye of the Shark’s sibling blend – the Don Carlos Personal Reserve Robusto each and every time. The shark size is intriguing and I did like the smaller format the Don Carlos used here. Since this is a milder smoke, it’s one that can be enjoyed by any cigar enthusiast. As for myself, there was still enough going on with the Eye of the Shark that it’s worthy to buy one and smoke it again.