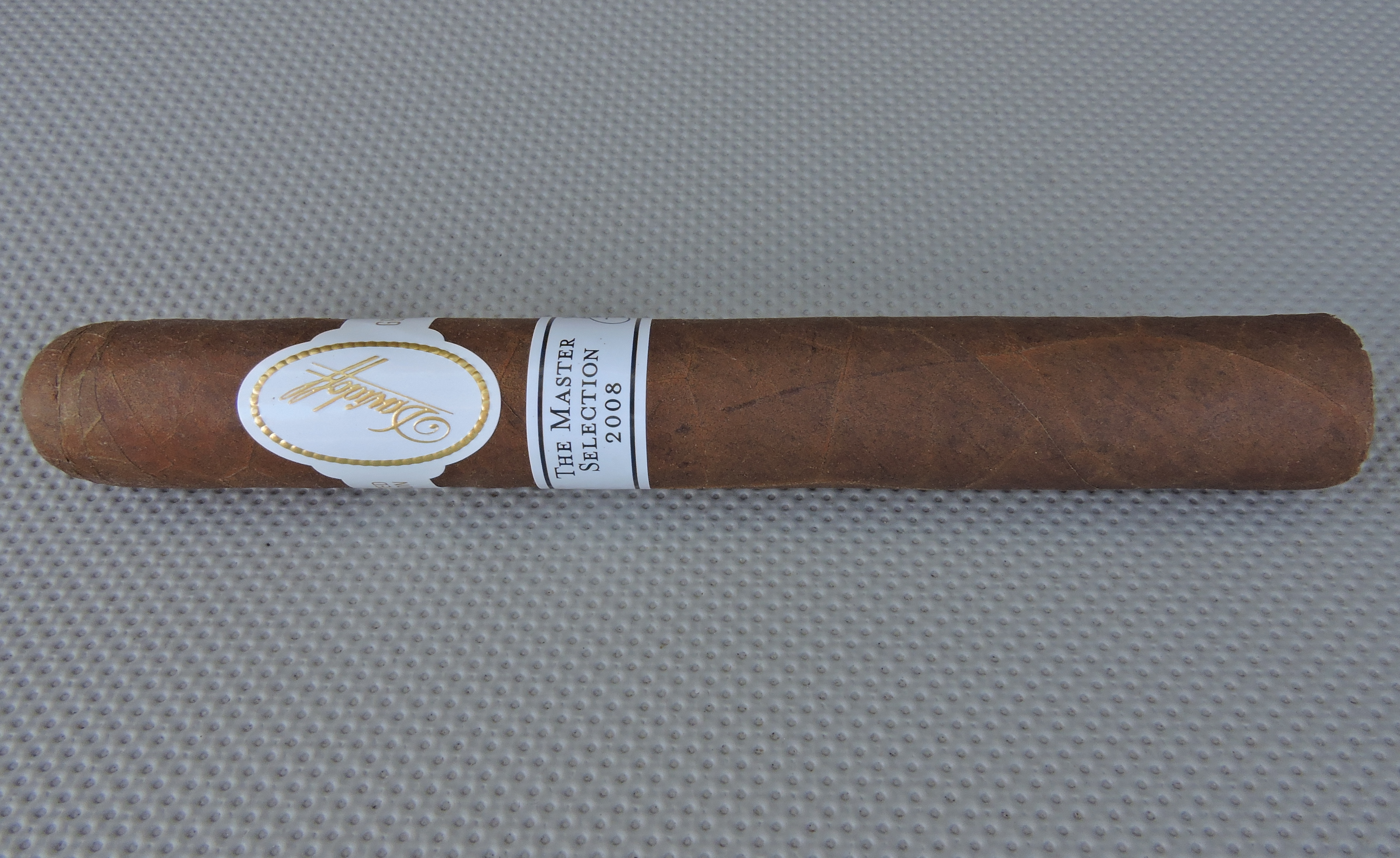 Three of the cigars in the series were made available to Davidoff’s Appointed Merchants while the other three were made available to Davidoff’s company-owned Flagship stores. Davidoff staggered the release of these blends throughout the summer of 2017, releasing two of the cigars at a time – one to the Appointed Merchants and one to the Flagship stores. The cigars in the series are:

Without further ado, let’s break down the Davidoff Master Selection 2008 and see what this cigar brings to the table.

The Ecuadorian Habano wrapper of the Davidoff Master Selection 2008 had a medium to dark brown color with a Rosado tint to it. Upon closer examination, there was a subtle amount of mottling on the surface of the wrapper. The wrapper also had a light coating of oil on it. This was a smooth wrapper with any visible veins on the thin side. Any visible wrapper seams were quite minimal and not very noticeable.

There are two bands on the Davidoff Master Selection 2008 cigar. The first band is similar to the classic Davidoff White label. It features the name “Davidoff” in classic cursive gold-colored font on an oval field of white. There are small gold circles going around the perimeter of the oval. The word “GENEVE” (in gold font) flanks to the right of the oval field. To the left of the oval, is the text “LIMITED EDITION” in gold font.

The secondary band is also white in color. There is a black pinstripe near the top of the band, as well as one toward the bottom of the band. On the center of the band is the text “THE MASTER SELECTION 2008” – also in white font. The right side of the band has what appears to be Eladio Diaz’s signature.

Prior to lighting up the Davidoff Master Selection 2008, I used a straight cut to remove the cap. Once the cap was removed, I proceeded with the pre-light draw. The dry draw delivered notes of natural tobacco and cedar. This wasn’t the most exciting pre-light draw, but since we do not calculate the pre-light experience into our rating or score, there is no loss of points here. At this point, I was ready to light up the Davidoff Master Selection 2008 and enjoy the smoking experience.

The start to the Davidoff Master Selection 2008 kicked off with more notes of natural tobacco and cedar. This was joined by a combination of black and white pepper. There also was an additional layer of black pepper from the retro-hale that was present on the retro-hale throughout the smoking experience.

During the first third, the natural tobacco moved into the forefront. During these early stages, the natural tobacco notes developed both some savory and musty qualities. The savory component had the edge during this stage. At the same time, the mustiness shouldn’t be considered a negative as I found it contributed to the balance of the overall flavor profile. The cedar and pepper moved into the background where it was joined by some classic Davidoff hay notes.

As the Davidoff Master Selection 2008 moved through the second third, the musty component of the natural tobacco flavor took more of the edge over the savory component. While this wasn’t a negative, I enjoyed the savoriness of the first third much better. During this stage, the cedar notes started to slowly increase in intensity. The pepper and hay notes remained grounded in the distant background.

During the last third, the cedar notes joined the natural tobacco flavors in the forefront. The natural tobacco still had some musty qualities and, to a lesser extent, some savoriness. The pepper had slightly increased and there still were some hay notes. This is the way the Davidoff Master Selection 2008 came to a close. The resulting nub was firm to the touch and cool in temperature.

The burn of the Davidoff Master Selection 2008 did require some frequent touch-ups along the way to keep a relatively straight burn path and burn line. While it wasn’t a problem-some burn, it was one that wasn’t “set it and forget it” burn either. The resulting ash had a salt and pepper color. This was an ash that was on the firm side throughout the smoking experience. Meanwhile, the burn rate and burn temperature were both ideal. 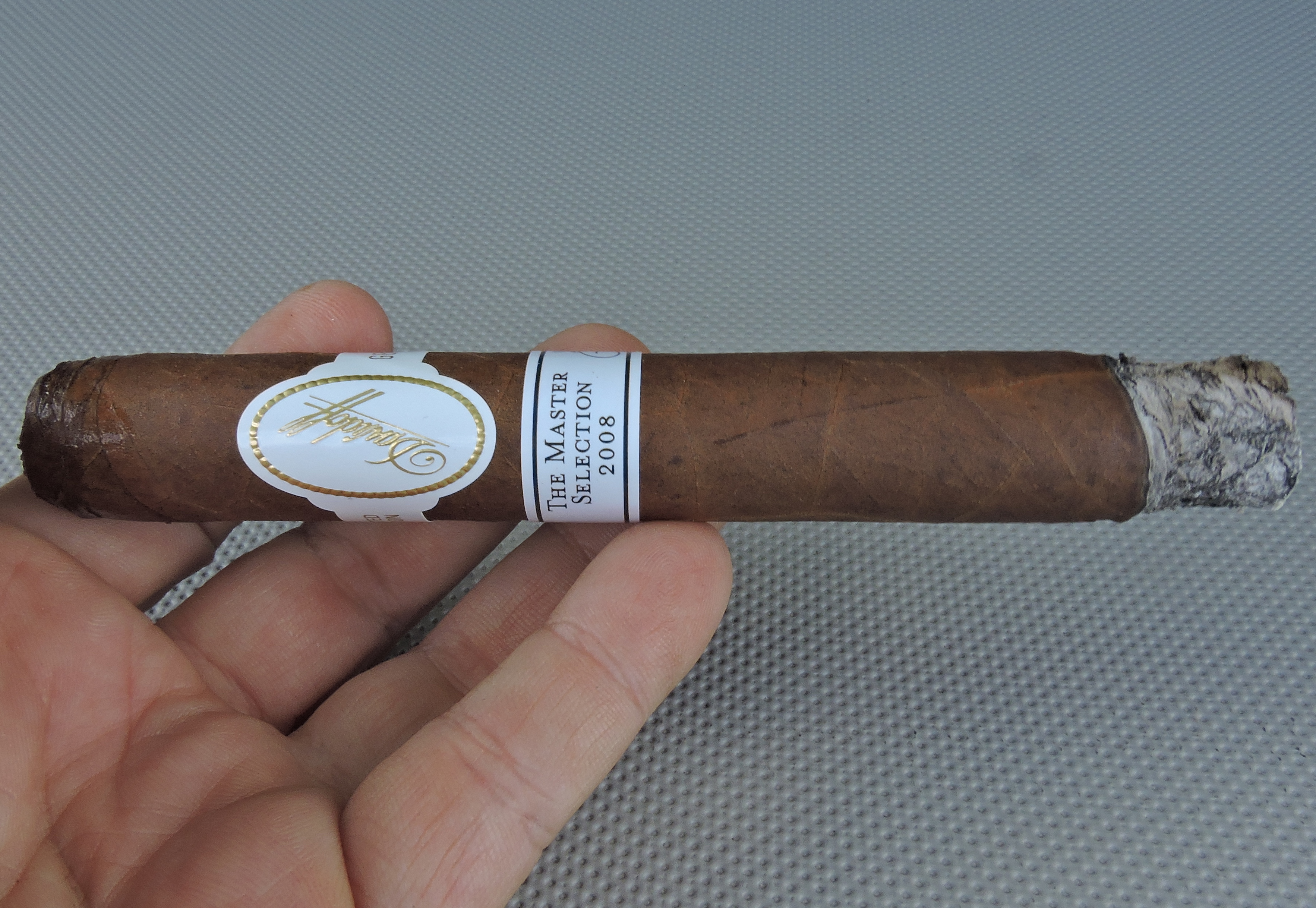 Burn of the Davidoff Master Selection 2008

The draw to the Davidoff Master Selection 2008 was ideal. It had just the right amount of resistance, yet at the same time, this was a low maintenance cigar to derive flavor from.

In terms of strength and body, the Davidoff Master selection 2008 started out medium. Both attributes slightly increased in intensity in the second third, but in the end, the cigar never got out of the medium strength and medium bodied spectrum zones. When looking at strength versus body, both attributes balanced each other nicely with neither overshadowing the other attribute.

The Davidoff Master Selection 2008 is a nice cigar. I admit, compared to some of the other offerings in the Master Selection Series, it would not be my first choice. While some of the flavors were unique, I found this was a  case of a good cigar that lacked a “wow” factor. I expect more from an ultra-premium cigar series like the Master Selection. If the flavors of the first third had held throughout the smoking experience, I would have rated this cigar much higher. Still, this is a cigar I’d encourage either a novice or experienced cigar enthusiast to try. While merit-wise, it still gets a respectable 89; the $35 price point leads me to recommend that if you have a chance to try this cigar and see if it’s in your wheelhouse, do so.