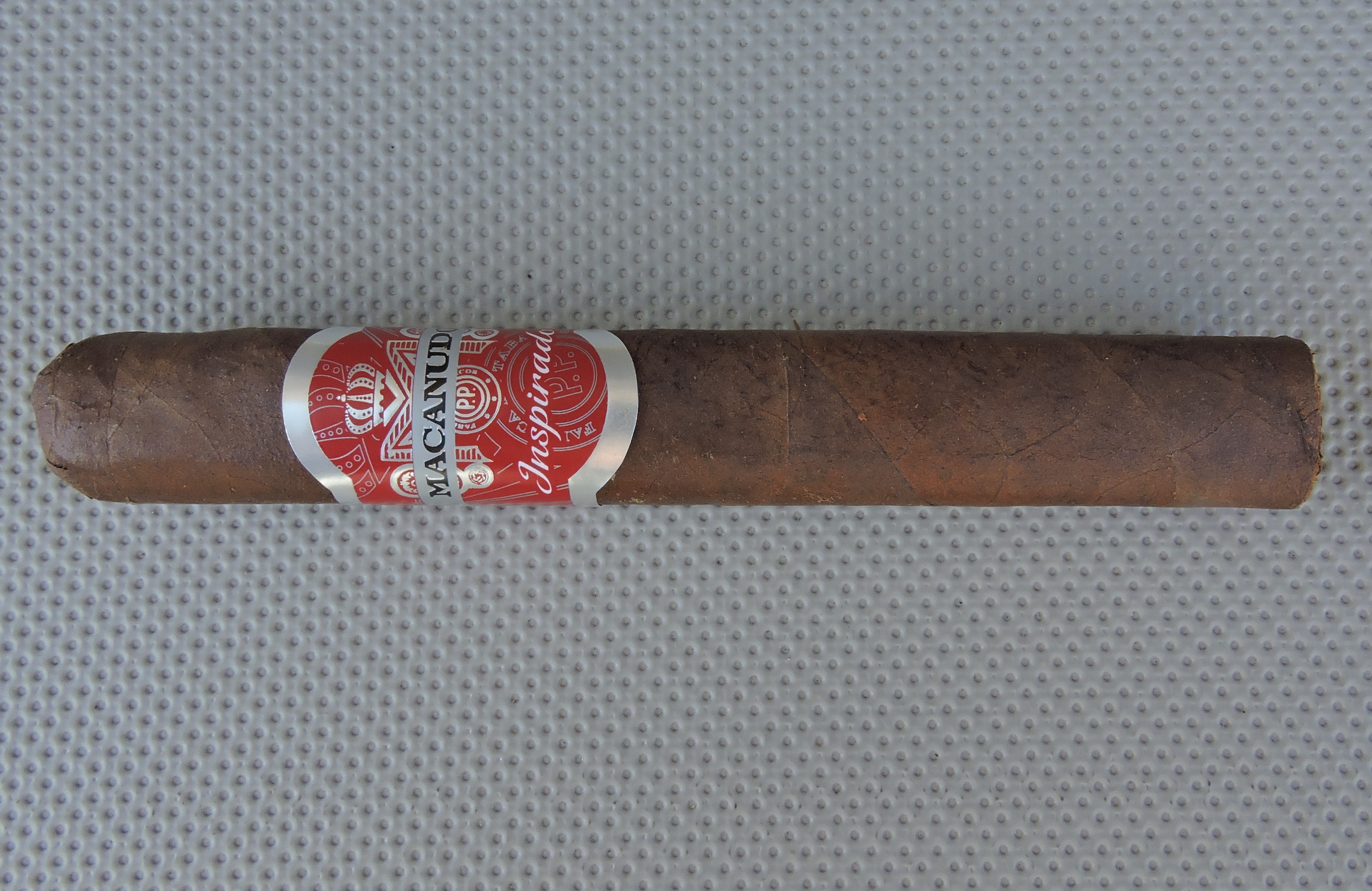 Back in 1968, Edgar Cullman Sr.’s General Cigar Company purchased a factory in Kingston, Jamaica called Temple Hall. At the time the factory owned and produced a small brand called Macanudo. Under Cullman’s leadership, Macanudo became one of the largest cigar brands in the world. While General Cigar is now owned by Scandinavian Tobacco Group (STG), Macanudo still remains a centerpiece brand in the company’s portfolio. 2018 marks the 50th anniversary of Macanudo being a part of General Cigar’s portfolio, and the company has unveiled plans to celebrate the occasion. As a part of the milestone, General has released a special cigar. Rather than reaching into the past, General has looked ahead to the future and has put the cigar into its Inspirado line – a newer line that looks to the future. That cigar is called the Macanudo Inspirado Red. It’s a cigar that breaks the mold of what Macanudo is known for in many ways. Today, we look at the Macanudo Red in the Robusto size.

Finally, Macanudo Inspirado Red is positioned as a value offering – with pricing between $6.49 and $7.49.

The Macanudo Inspirado Red is highlighted by a high priming (ligero) Ecuadorian Habano wrapper. The remainder of the blend features a binder from Jalapa and aged tobaccos from Honduras and Nicaragua.

The Macanudo Inspirado Red is available in three sizes – each presented in 20-count boxes. The Robusto size is the one vitola in the line that is box-pressed.

The Ecuadorian Habano wrapper of the Macanudo Inspirado Red Robusto had a classic chocolate brown color. There was a slight Colorado red tint to the wrapper and there also was a slight amount of mottling on the surface. This was a relatively smooth wrapper with some oil on it. The wrapper itself was nearly void of any visible veins and any visible wrapper seams were minimal. As for the box-press, it was firm in more of a classic square press shape.

As expected, the band of the Macanudo Inspirado Red has a primarily red color. The band itself has a silver trim. There also is a thick silver stripe going through the center of the band. On the center of the band is the text “MACANUDO” in black font. Just below the silver stripe is the text “Inspirado” in white scripted font. Behind the band is the new Macanudo logo in silver font. The band also has some additional older Macanudo logos in a watermark stamp-like design.

Prior to lighting up the Macanudo Inspirado Red Robusto, I used a straight cut to remove the cap. After the clip was removed, I proceeded with the pre-light draw ritual. The cold draw produced notes of cedar, leather, and a slight chocolate note. I consider the pre-light draw of this cigar to be satisfactory. At this point, I was ready to light up the Macanudo Inspirado Red Robusto and see what the smoking experience would deliver.

The Macanudo Inspirado Red Robusto started out with a spurt of red and black pepper with some cedar. Once the pepper subsided, notes of chocolate, fruit sweetness, and a slight metallic note surfaced. The chocolate notes moved into the forefront early with the fruit, pepper, cedar, and metallic notes settling in the background. The metallic note should not be considered a negative here as it contributed positively to the balance of the overall flavor profile. Early on the retro-hale delivered a citrus spice, but as the cigar moved through the first third, the retro-hale switched to an additional layer of black and white pepper.

Late in the first third, some earthy notes show up in the background. As the Inspirado Red Robusto moved through the second half, the earthy notes gradually increased in intensity. Just past the midway point, the cedar notes also started to increase in intensity. Toward the latter part of the second third, both the cedar and earth notes increased enough to become primary flavors with the chocolate. Meanwhile, the metallic, fruit, and pepper notes remained in the background making subtle contributions to the overall flavor profile.

During the last third, the cedar and earth displaced the chocolate. The chocolate moved into the background joining the pepper, fruit and metallic notes. This is the way the Macanudo Inspirado Red Robusto came to a close. The resulting nub was firm to the touch and cool in temperature.

With a higher priming wrapper, sometimes I don’t know what to expect from the burn of a cigar that uses it. However, I’m pleased to report the Macanudo Inspirado Red Robusto came through with flying colors. While there were a few isolated cases of jaggedness on the burn line, I found the Inspirado Red Robusto maintained a relatively straight burn path and a straight burn line. The resulting ash was firm with a salt and pepper color. The ash itself had a salt and pepper color to it. The burn rate and burn temperature were ideal. 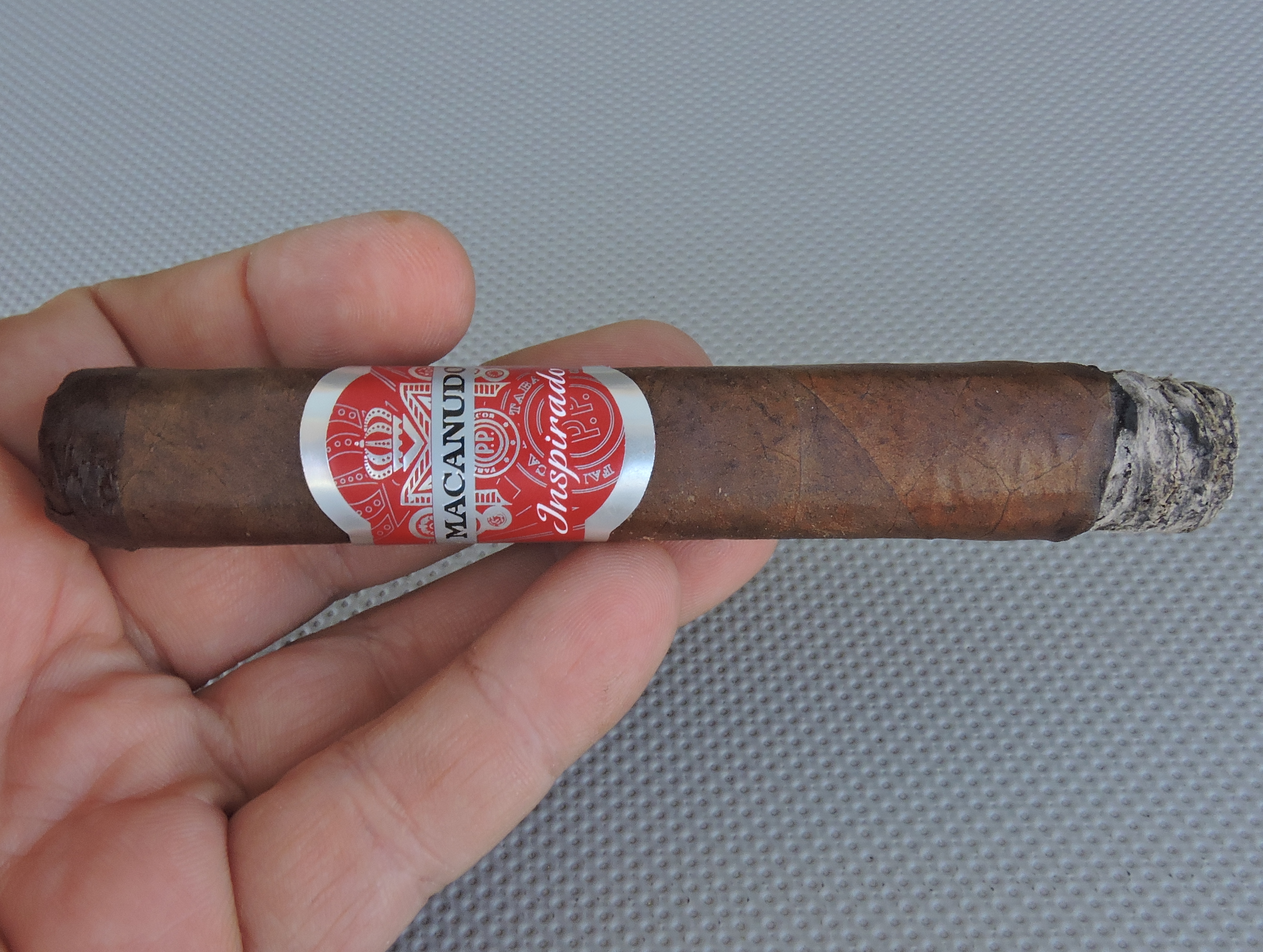 The draw to the Macanudo Inspirado Red Robusto also performed quite well. It had the right amount of resistance for a box-press cigar – specifically, it wasn’t too open of a draw. In the end, I found the draw on this cigar to be low maintenance.

In short, the Macanudo Inspirado Red Robusto is going to deliver a medium strength, medium to full-bodied smoke. There is a slight variance in intensity of strength and body as well, but in the end the Inspirado Red Robusto remains medium strength, medium to full-bodied. In terms of strength versus body, I had the body maintaining the edge throughout the smoking experience.

There are two things that perplexed me about this release.  First, I was a little surprised that Macanudo didn’t make a bigger splash for its 50th anniversary when it came to the cigar. They didn’t even opt to band the cigar for its 50th. Secondly, I’m not a big fan of trying to reinvent a brand as something that it isn’t. If it were up to me, I would always keep Macanudo the milder brand in the General portfolio.

That being said, when it came to the actual Macanudo Inspirado Red Robusto cigar, it didn’t matter how this was branded. This was an excellent offering. While it’s not a cigar that will knock you down with strength, it is a cigar that delivers on a fuller-bodied experience. I found the flavor profile to be quite enjoyable and things worked nicely in the box-press format. While it is fuller, it’s a great cigar for a novice to “graduate” to something fuller – and will appeal to the more seasoned cigar enthusiast. As for myself, this is a cigar I would smoke again – and at $6.49 per cigar, it garners box worthy consideration.