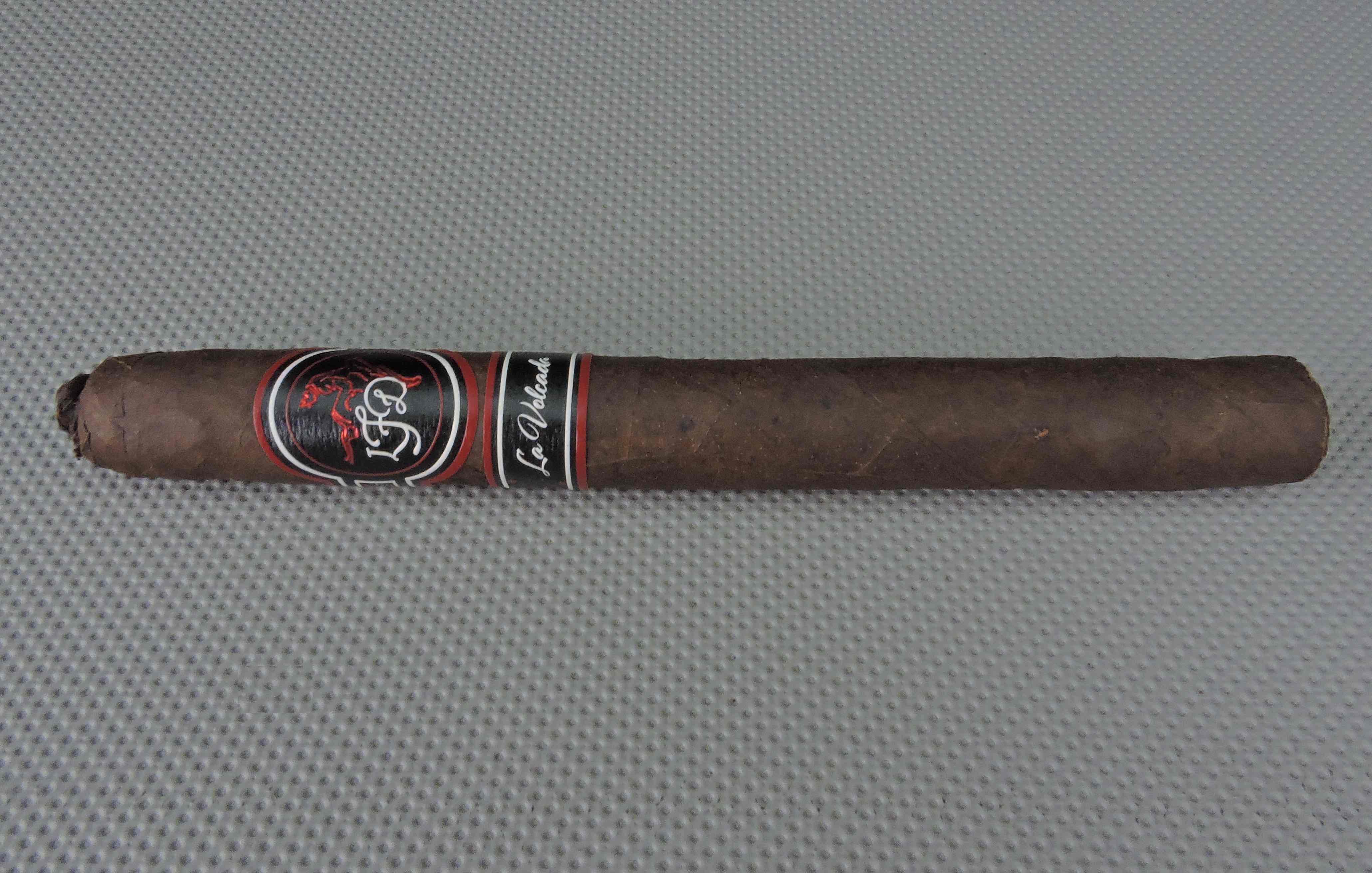 The name La Volcada pays homage to the Tango dance. La Volcada is one of the more famous steps in the Tango dance. It is the point where both partners in the dance lean forward. La Flor Dominicana Company owner Litto Gomez was born in Spain, but grew up in Uruguay. In 2016, Andalusian Bull paid homage to his birth country of Spain, where the Andalusian Bull is popular. With La Volcada, Gomez now pays homage to Uruguay, which is the country he would grow up in. It’s not the first time Tango has been referenced in a La Flor Dominicana release as one of the sizes of the La Flor Dominicana 1994 line is known as Tango.

Without further ado, let’s break down the La Flor Dominicana La Volcada and see what this cigar brings to the table.

The Churchill size is presented in 20-count boxes. 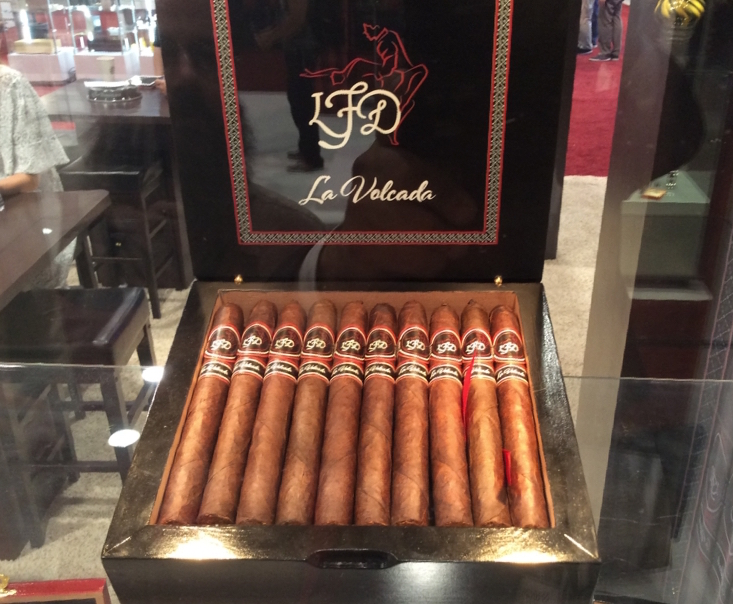 Packaging of the La Volcada

The San Andres Mexican wrapper of the La Volcada had a classic roasted coffee bean color. There was a slight amount of mottling on the surface of the wrapper. There also was a light coating of the oil. There were some visible veins while the dark color of the wrapper did a nice job at hiding the wrapper seams. The cap of the cigar is finished with a swirled pig-tail.

There are two bands on the La Volcada. The primary has a black circular field on the front. On the band is the initials “LFD” in white script. To the upper right of the band is an image of a tango dance in metallic red. The sides of the band have a light-colored chain link pattern on a black background. The entire band has dark red and white trim around the edges.

The secondary band is also black with dark red and white trim around the edges. On the center of the band is the text “La Volcada” in white script font. To the left and right there is a light-colored chain link pattern on the black background.

Instead of pulling off the pig-tail cap of the La Flor Dominicana La Volcada, a straight cut was used to remove the cap and the pig-tail simultaneously. At this point, it was time to move on to the pre-light draw phase. The dry draw delivered a mix of coffee, wood, and a slight amount of spice. Overall this was a satisfactory pre-light draw. At this point, it was time to light up the La Volcada and see what the smoking phase would have in store.

The start of the La Flor Dominicana La Volcada delivered a mix of coffee, classic wood, cedar, baker’s spice, and some mixed pepper notes. The coffee and cedar moved to the forefront early on, and about midway through the first third, the coffee took over as the sole primary note. The classic wood joined the cedar and spices in the background. The cedar, baker’s spice and pepper alternated in intensity. On the retro-hale, there was a mix of cedar and white pepper.

Later in the first third, the coffee notes of the La Volcada became richer. Meanwhile, the baker’s spices started to dissipate and was replaced by a citrus note. The citrus remained in the background. Just past the midway point the pepper and cedar notes both increased in intensity. The cedar notes increased at a more rapid rate and the end of the second third these notes rejoined the coffee in the forefront.

The final third was similar to how the second third closed out. The cedar seemed to have a slight edge over the coffee. The pepper notes were a little more prominent, while the more distant background still had notes of wood and citrus. This is the way the La Volcada came to a close. The resulting nub was slightly soft to the touch and cool in temperature.

The La Flor Dominicana La Volcada maintained a straight burn path from start to finish. There was a slight amount of jaggedness on the actual burn line, but this proved to be more cosmetic than anything and didn’t require any more touch-ups above the norm. The resulting ash had a light gray color. This was an ash that was on the firmer side. Meanwhile, the burn rate and burn temperature were both ideal. 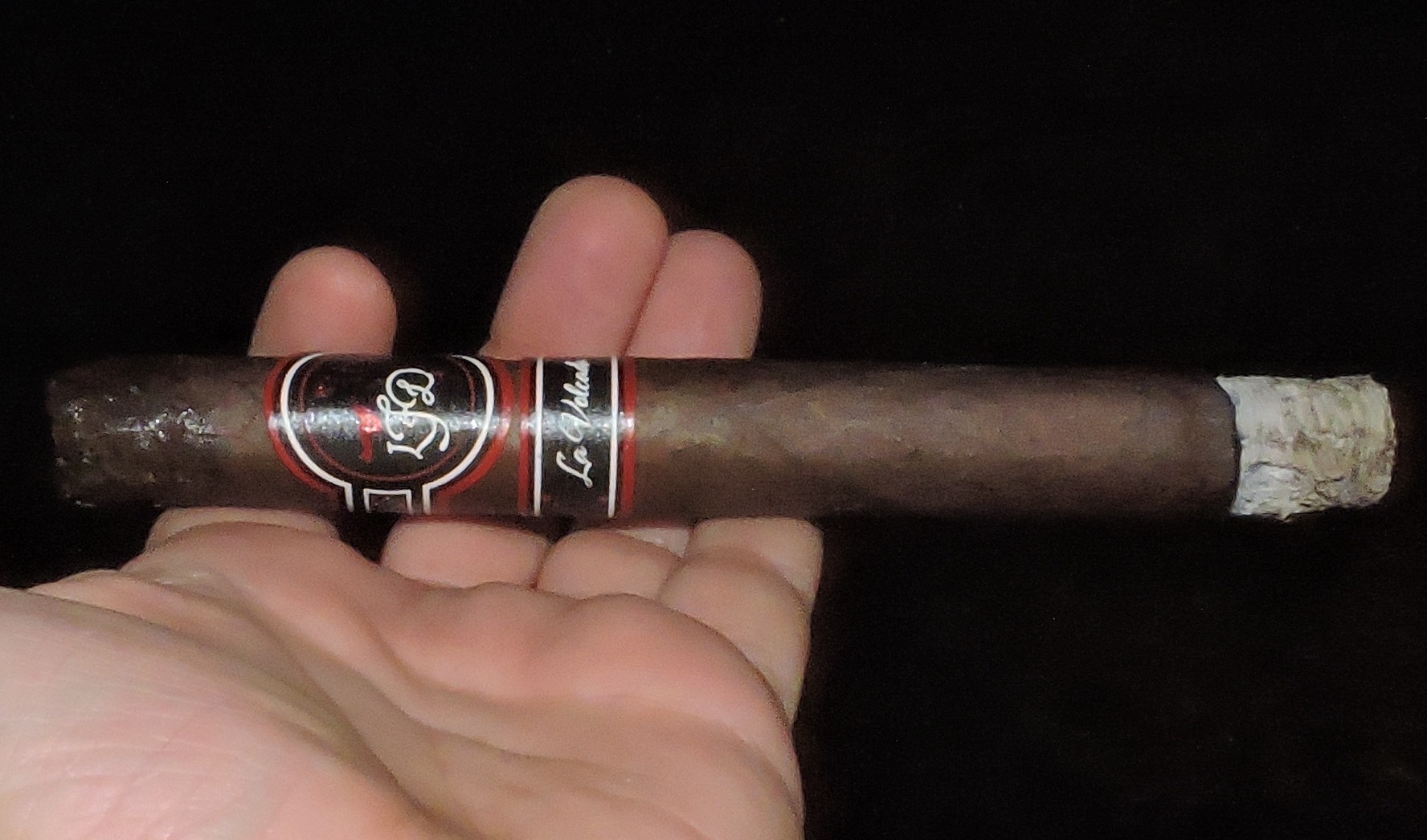 The draw to the La Volcada struck a nice equilibrium of resistance and openness. I also found this cigar produced a decent amount of smoke. This was a low maintenance cigar to derive flavor from.

Regarding both strength and body, the La Flor Dominicana La Volcada is a cigar that started out medium. Throughout the smoking experience, I found the intensity level to remain relatively constant for both attributes. There also was a nice balance between the strength and body as neither attribute overshadowed the other.

La Flor Dominicana built a reputation for delivering some of the most powerful smokes out of the Dominican Republic. Over the past few years, the company has been focusing on dialing back on the strength while continuing to be high on flavor. The La Volcada is a great example of such a cigar – following in the footsteps of La Nox and Andalusian Bull. It’s also a cigar that continues to get better with age, so I’m curious to see where this cigar will be in 12 to 18 months. In the meantime, it’s still an enjoyable cigar that delivers some nice flavors. La Volcada delivers a nice amount of spices, it doesn’t deliver overwhelming spice. This is a cigar I could recommend to a novice or experienced cigar enthusiast. As for myself, this is a cigar I’d smoke again – and buy multiples for the humidor.