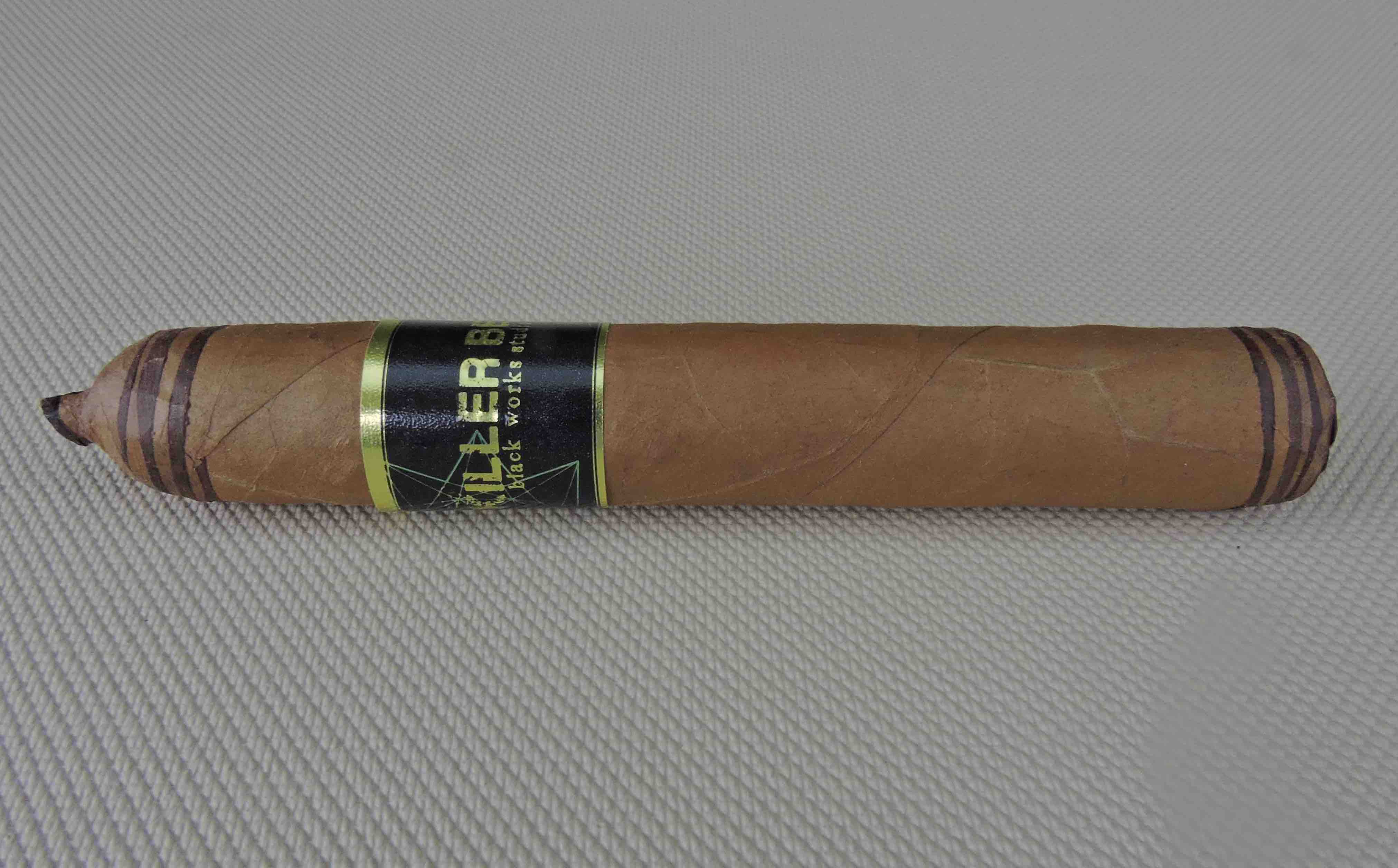 Black Works Studio’s Killer Bee has become one of the more popular lines. It is a line that features multiple leaves used on the wrapper. The line is highlighted by a closed footer and the use of a secondary tobacco leaf to provide accents around the cigar.

Now, let’s break down the Black Works Studio Killer Bee Connecticut and see what this cigar has to offer.

As mentioned above, the base wrapper of the Black Works Studio Killer Bee Connecticut is an Ecuadorian Connecticut Shade with an Ecuadorian Maduro leaf used for the accents. The remainder of the blend consists of Nicaraguan tobaccos.

The Black Works Studio Killer Bee Connecticut has only been produced in one size – a 4 1/2 x 46 petite corona.  The cigars are presented in 20-count boxes.

The base Ecuadorian Connecticut Shade wrapper had a golden brown color to it. There wasn’t much in the way of oil on the surface. This was a relatively smooth wrapper with any visible veins and visible wrapper seams on the thin side. There was a swirl-like ring design near the cap and footer using the Ecuadorian Maduro wrapper. The Ecuadorian Maduro wrapper covered the footer as well. Finally, the cap is finished with a thick-fuse like design that also features a maduro accent.

The band to the Black Works Studio Killer Connecticut is the same as the original Killer Bee offering. The band is black with colored accents with gold trim. The name “KILLER BEE” appears in large gold font. Just below the text is the text “BLACK WORKS STUDIO” in smaller gold font. To the left of the text is a large gold-colored bee sitting on what appears to be a metallic green “hornet’s nest-like” design.

A straight cut was used to remove both the cap and the fuse of the Black Works Studio Killer Bee Connecticut at the same time. Once the cap was removed, it was time to commence with the pre-light draw. The dry draw delivered notes of classic wood as well as subtle notes of cream and acidic notes. While it wasn’t the most exciting of pre-light draws, it does not count against this cigar since the pre-light draw is not scored. At this point, it was time to light up the Killer Bee Connecticut and see what the smoking experience would have in store.

The Killer Bee Connecticut started out with notes of cream, black pepper, and coffee. After burning through the initial stages, some subtle citrus notes emerged. During the early stages, the coffee and black pepper moved to the forefront with the cream and citrus becoming secondary notes. There also was an additional layer of black pepper present on the retro-hale.

Later in the first third, the coffee notes emerged as the primary note. The cream and pepper were close secondary notes that were alternating in intensity. As the Killer Bee Connecticut moved through the early stages of the second third, some cedar notes mixed in with the pepper. Meanwhile, the citrus notes remained in the more distant back.

Just past the midway point of the Killer Bee Connecticut, there was an increase in the cedar and the pepper notes. Meanwhile, the creaminess that was present in the background earlier had subsided. The final third saw the coffee notes still in the forefront. The cedar and pepper notes remained in the background along with some subtle touches of citrus.  This is the way the Killer Bee Connecticut came to a close. The resulting nub was slightly soft to the touch and cool in temperature.

The Black Works Studio Killer Bee Connecticut delivered stellar performance when it came to the burn. For the most part, this cigar had a relatively straight burn line and maintained a straight burn path. The resulting ash wasn’t overly firm, but it wasn’t loose or flaky either. This was an ash that had a silver-gray color with some darker speckling mixed in. Meanwhile, the Killer Bee Connecticut maintained an ideal burn temperature and ideal burn rate. 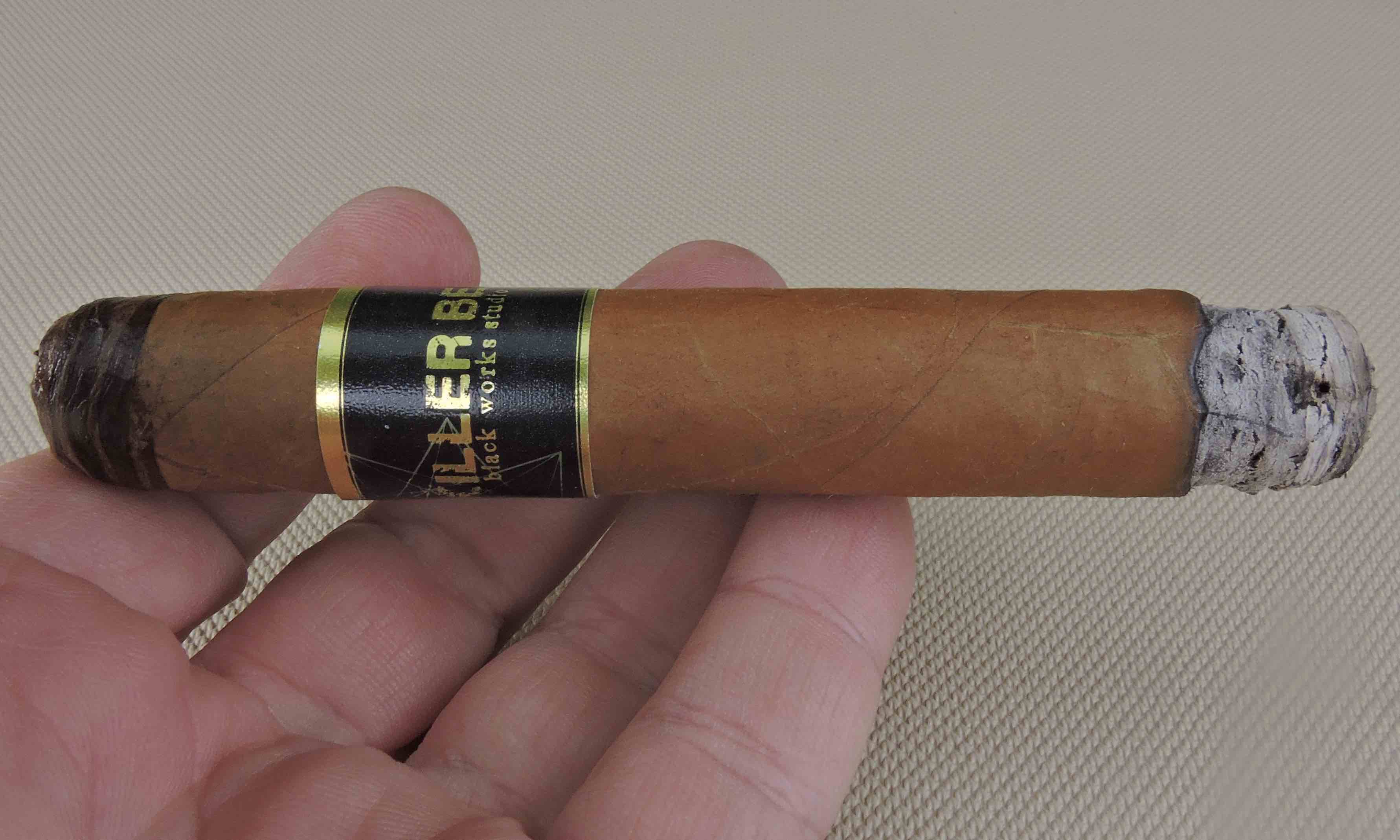 The Killer Bee Connecticut had a touch of resistance, which is what I consider to be a sweet spot for a draw. Despite a little resistance, this was a draw that also produced a nice volume of smoke. In the end, this was also a low maintenance cigar to derive flavor from.

When it comes to Connecticut Shades hitting the market, they tend to fall into two categories: 1) traditional ones that are milder; and 2) more contemporary ones that attempt to push past the milder boundaries of strength and body. The Killer Bee Connecticut is one of the contemporary ones. This is a cigar that delivered a medium strength, medium to full-bodied smoke. The intensity levels of both the strength and the body increased as the smoking experience progressed.

In terms of strength and body, I found the body had the edge from start to finish.