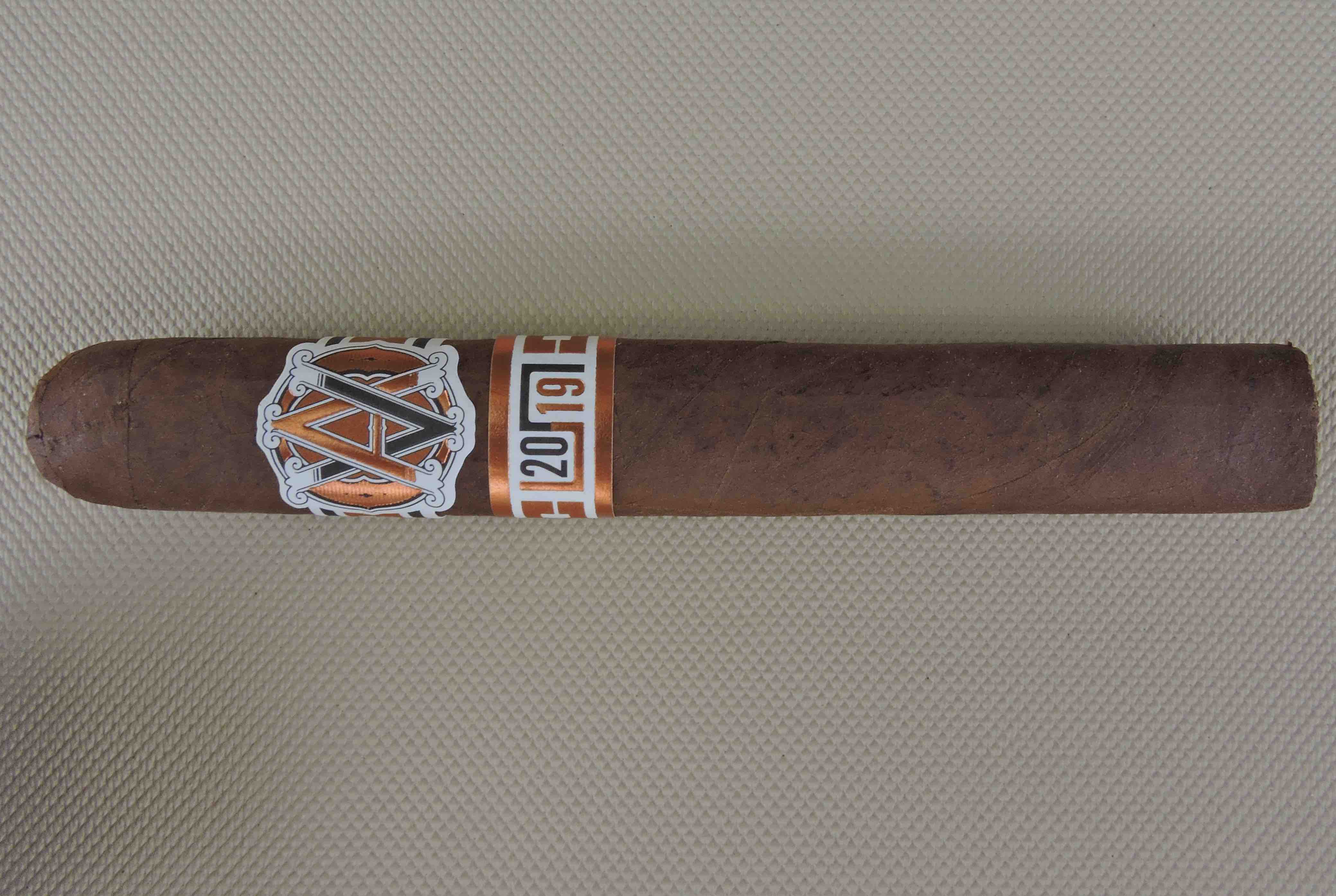 The AVO Improvisation LE19 is the seventh installment in the AVO Cigars’ Improvisation Series. It is the latest in a long line of limited edition AVO Cigars that can be traced back to 2001 with the release of the AVO 75th Anniversary cigar. Each subsequent year through 2014 the series was for the most part an annual release with a different size and different blend. Coinciding with the makeover of the AVO brand in 2015, the series would change into the AVO Improvisation series. While still limited editions, these cigars would draw inspiration from tobaccos and other concepts related to cigars. Today, we will dive deeper into the AVO Improvisation LE19, specifically the box-pressed Toro version.

In terms of the improvisation, previous installments have drawn inspiration from other AVO blends or specific tobaccos used in an AVO brand. This year, AVO has taken a different approach. The “Improvisation” comes from the cigar molds that are used in the packaging. As Scott Kolesaire, Director of Marketing at Davidoff of Geneva USA  noted:

Avo Uvezian broke conventions as the first cigar manufacturer to produce an annual limited edition cigar in the year 2001. In honor of his legacy, we decided to “break the mold” once again, with this unique 2019 release. The AVO Improvisation LE19 packaging is inspired by the box pressed cigar molds used to shape the cigars in the rolling process. The cigar’s secondary band draws further inspiration from the mold and ties in this concept with a unique typographic “2019” lockup incorporated into a mold pattern.

For completeness, the following are the five installments of the AVO Improvisation series and what each drew inspiration from.

Now, let’s break down the AVO Improvisation LE19 and see what this cigar brings to the table.

The blend for the AVO Improvisation LE19 uses tobaccos from Ecuador, the Dominican Republic, and Peru. The cigar is highlighted by a dark Ecuadorian wrapper.

As mentioned there are two offerings of the AVO Improvisation LE19. One for the U.S. and one for the international market. 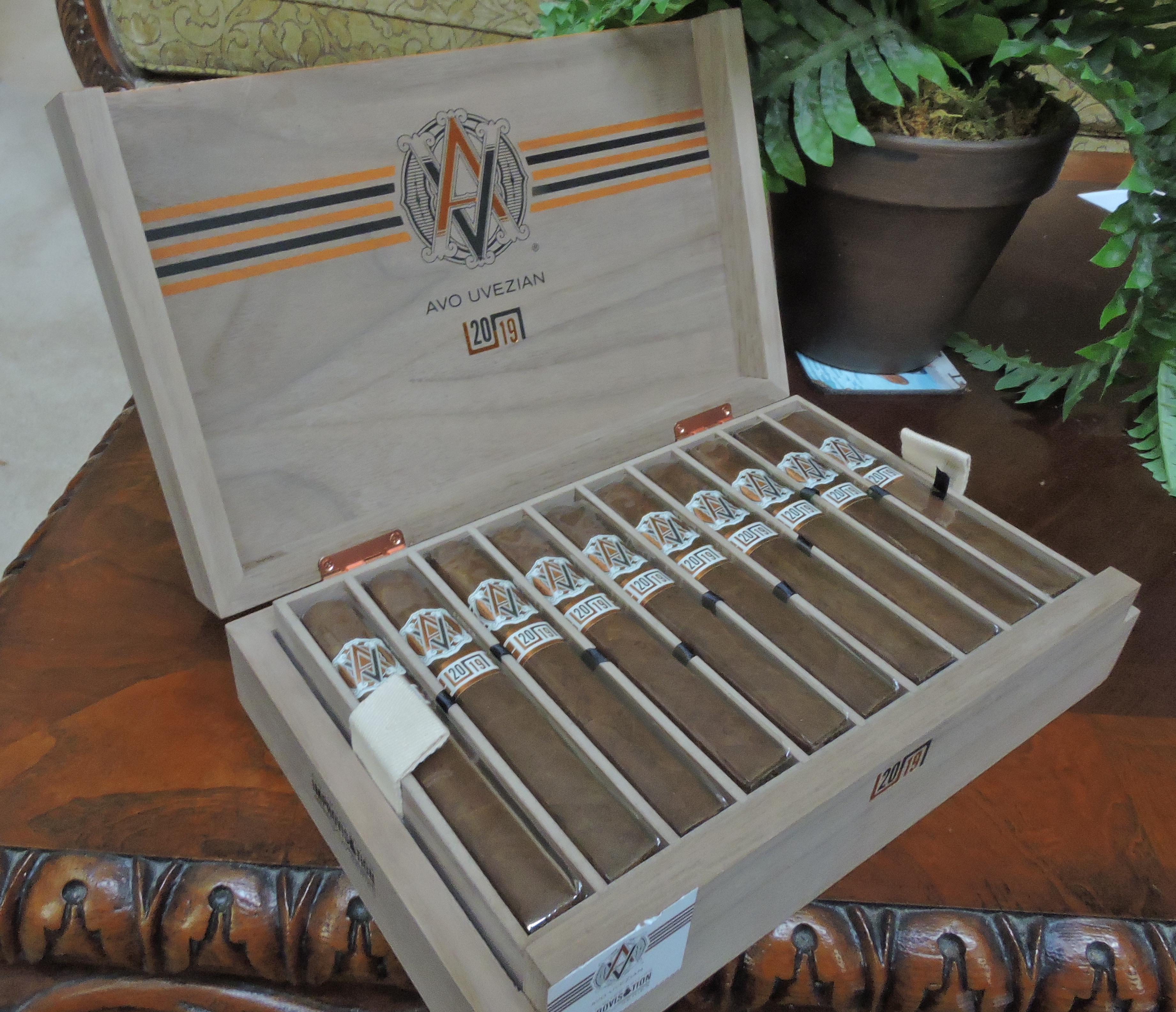 The Ecuadorian wrapper of the AVO Improvisation LE19 had a dark cinnamon color. Upon closer examination, there was some subtle mottling on the surface of the wrapper. The wrapper itself also had a light coating of oil. This was a relatively smooth wrapper with visible veins on the thin side and most of the wrapper seams were well hidden. The cigar itself has more of trunk-press style box-press.

There are two bands on the AVO Improvisation LE19. The primary band is similar to what has been seen on the other Improvisation releases. This band features an antique white background. On the center of the band is a copper, black, and antique white AVO logo on a brown background. There is a thick horizontal copper stripe on the left and right side of the band. This is flanked by black and white trim above and below the copper stripe. To the right is the text “AVO UVEZIAN” in white font on the copper stripe. To the left is the logo for the AVO Improvisation Series.

The secondary band has mostly a copper,  white and black color scheme. The center of the band does have the LE19’s “2019” logo arranged in the “lock-up” style described earlier.

The 20-count wooden box is packaged with a cardboard outer sleeve box. 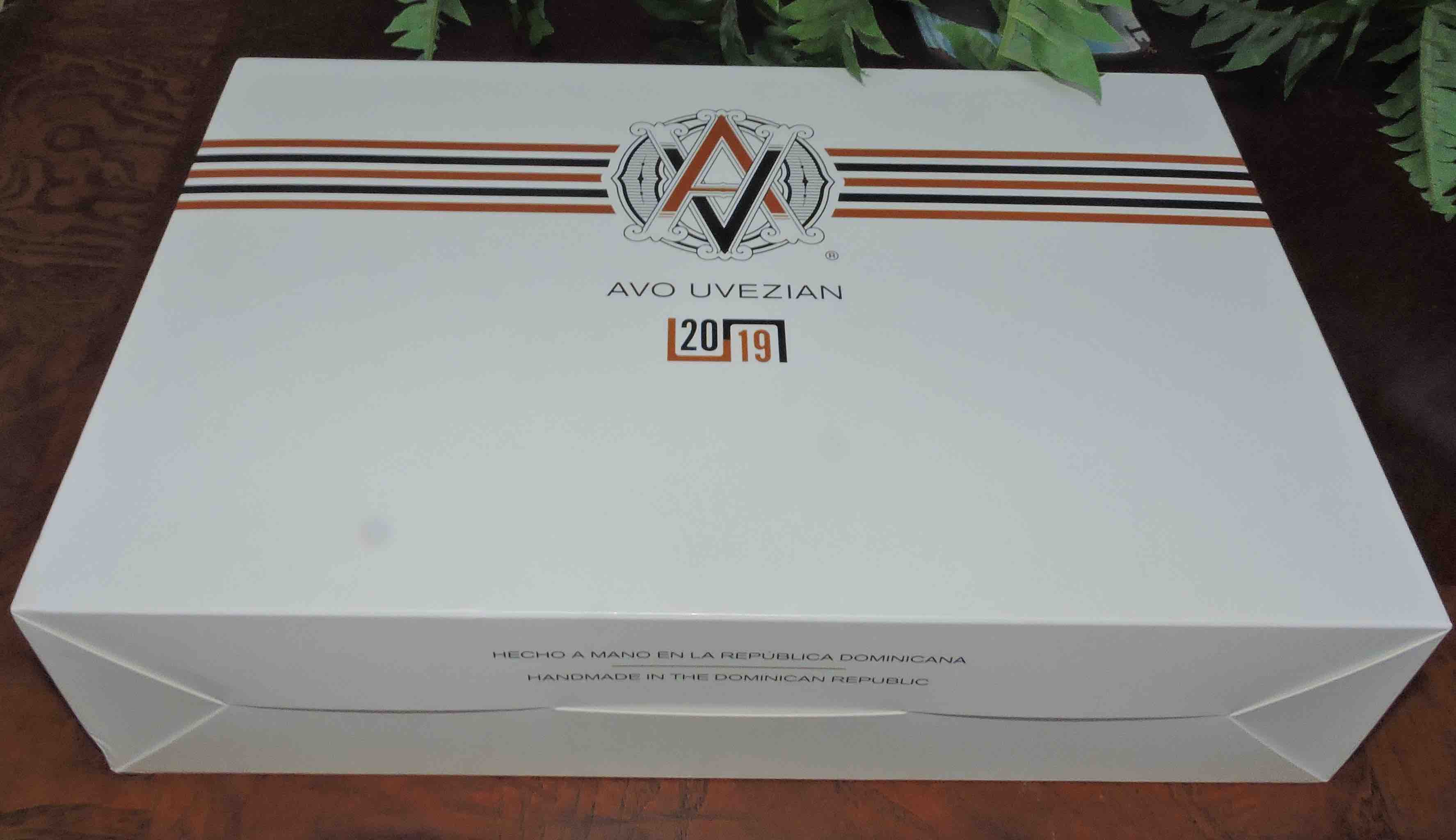 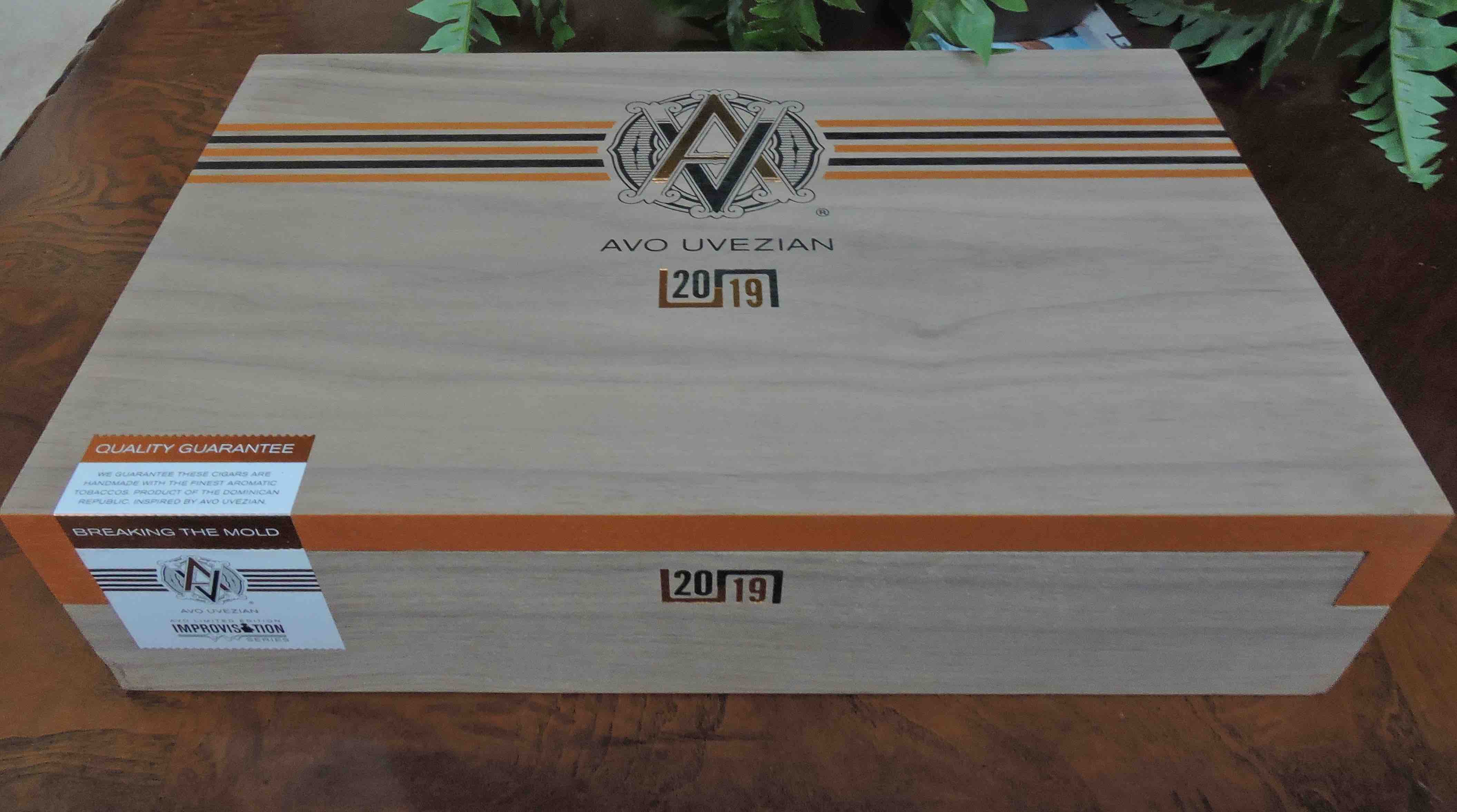 The box contains two trays resembling cigar molds. Each cigar is in an individual slot. 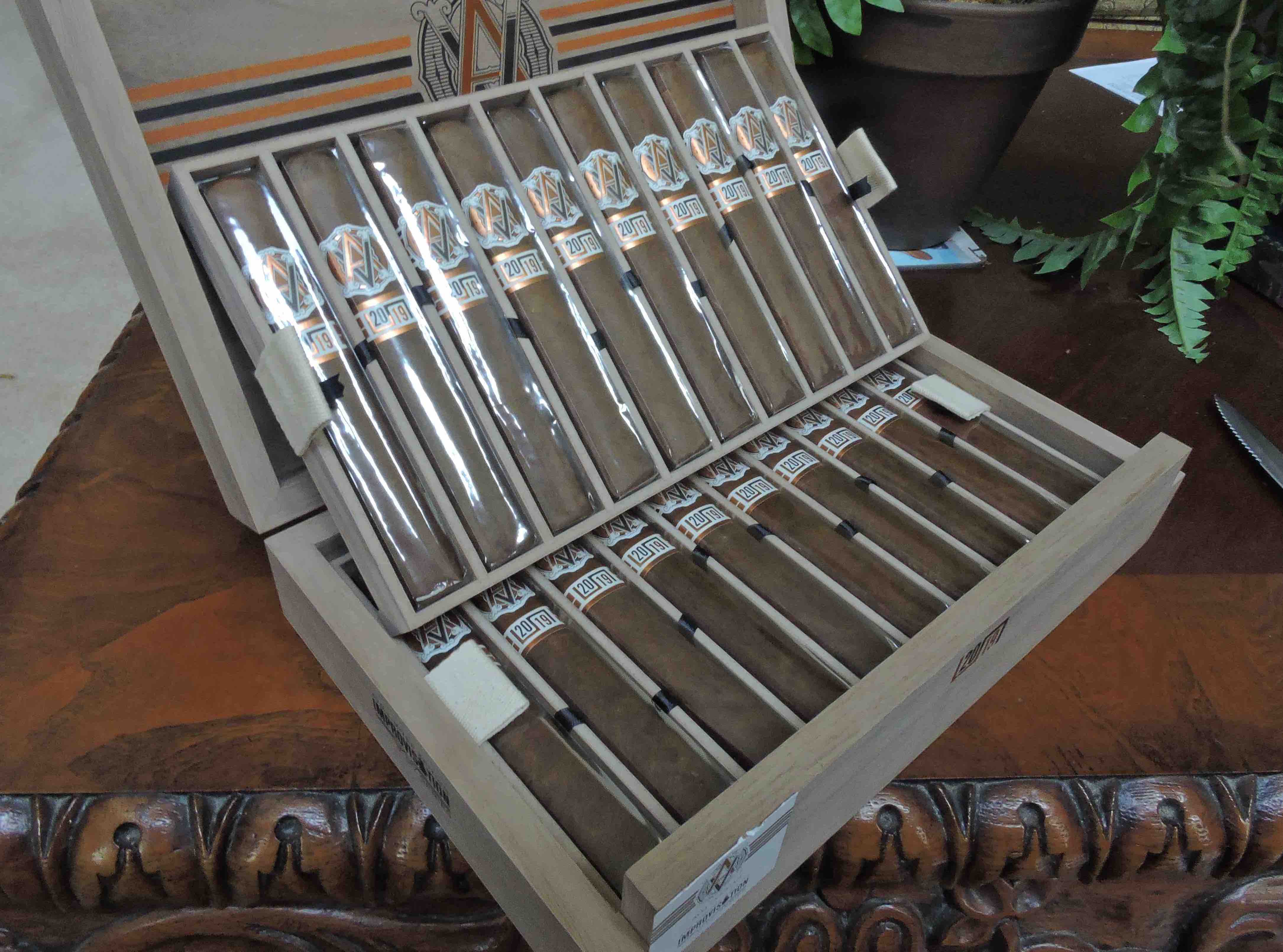 The cigar experience of the AVO Improvisation LE19 started with a straight cut to remove the cap. Once the cap was removed it was on to the pre-light draw ritual. The dry draw delivered a mix of sweet natural tobacco, cedar, hay, and nut. I judged this to be a very good pre-light draw. At this point, it was time to light up the AVO Improvisation LE19 and see what the smoking experience would have in store.

The start of the AVO Improvisation LE19 picked up where the pre-light draw left off. There were more notes of sweet natural tobacco, nut, cedar, and hay. Early on there was no dominant note, but as the cigar moved through the first third, the sweet natural tobacco and nut flavors moved to the forefront. The cedar and hay settled in the back and were joined by some black pepper notes. Meanwhile, the retro-hale delivered additional layers of black pepper, cedar, and baker’s spice.

The second third saw some earth notes mix in with the natural tobacco and nut flavors in the forefront. Meanwhile, there was an increase in the hay and pepper notes. By the midway point the earth notes took over as the sole primary note. The natural tobacco receded into the background joining the cedar, hay, and pepper notes. By this point, the black pepper was more prominent on the retro-hale.

For most of the second half, the earth notes remained ground. There were varying levels of the other notes, most notably the pepper and cedar notes. The hay and nut flavors became more diminished during this time. This is the way the AVO Improvisation LE19 came to a close. The resulting nub was firm to the touch and cool in temperature.

There was a slight amount of curvature on the burn line. This required a few additional touch-ups above the norm to prevent the cigar from meandering on its burn path. The resulting ash had a silver-gray color with some darker streaks mixed in. At times the ash was quite firm, and other times it wasn’t as firm. Meanwhile, the burn rate and burn temperature were both in the ideal range. 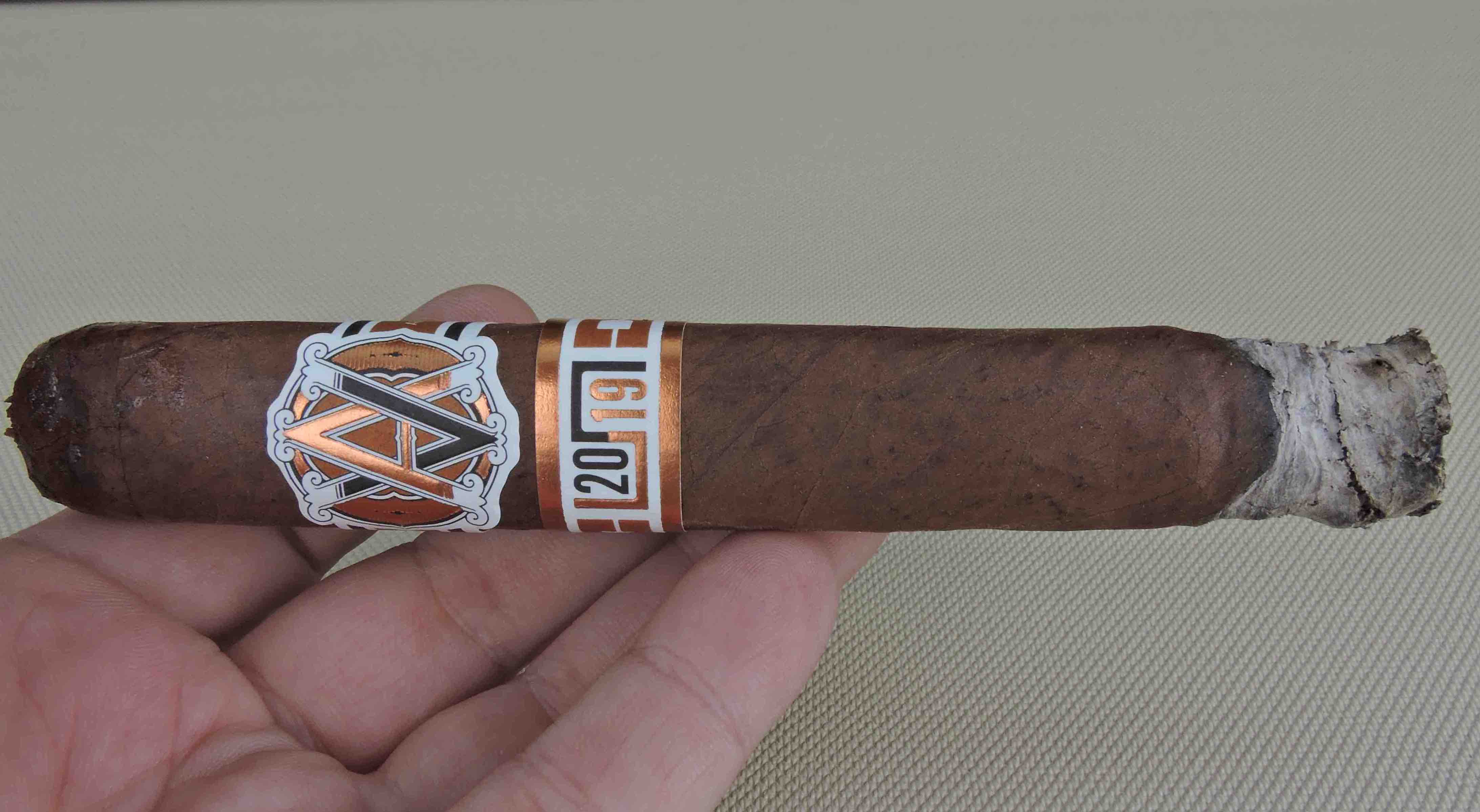 For a box-press, I was quite pleased with the draw of this cigar. Sometimes a box-press draw can be more open that I prefer, but this cigar seemed to have the right balance on openness and resistance. At the same time, this cigar still produced a nice amount of smoke.

The AVO Improvisation LE19 started out as a mild to medium cigar in strength and medium in body. As the cigar progressed, there was a slow, but linear increase in intensity in both attributes. Just past the midway point the LE19 pretty much was medium in strength and medium to full in body. The increase in intensity leveled off in the final third.

This is a solid addition to the AVO Improvisational Series. Usually, I look for an AVO Limited Edition cigar to set itself apart from the core offerings – and I could definitely say the AVO Improvisation LE19 is one of those cigars. While it may seem cliché to say the flavors of an AVO cigar meshed in perfect harmony, that’s what I found with the AVO LE19. The box-pressed format performed quite well with this blend, but I’m curious how the rounded version will perform. This is a cigar I could recommend to a novice or experienced cigar enthusiast. As for myself, this is a cigar I would smoke again – and it’s worthy of picking up multiples for the humidor.