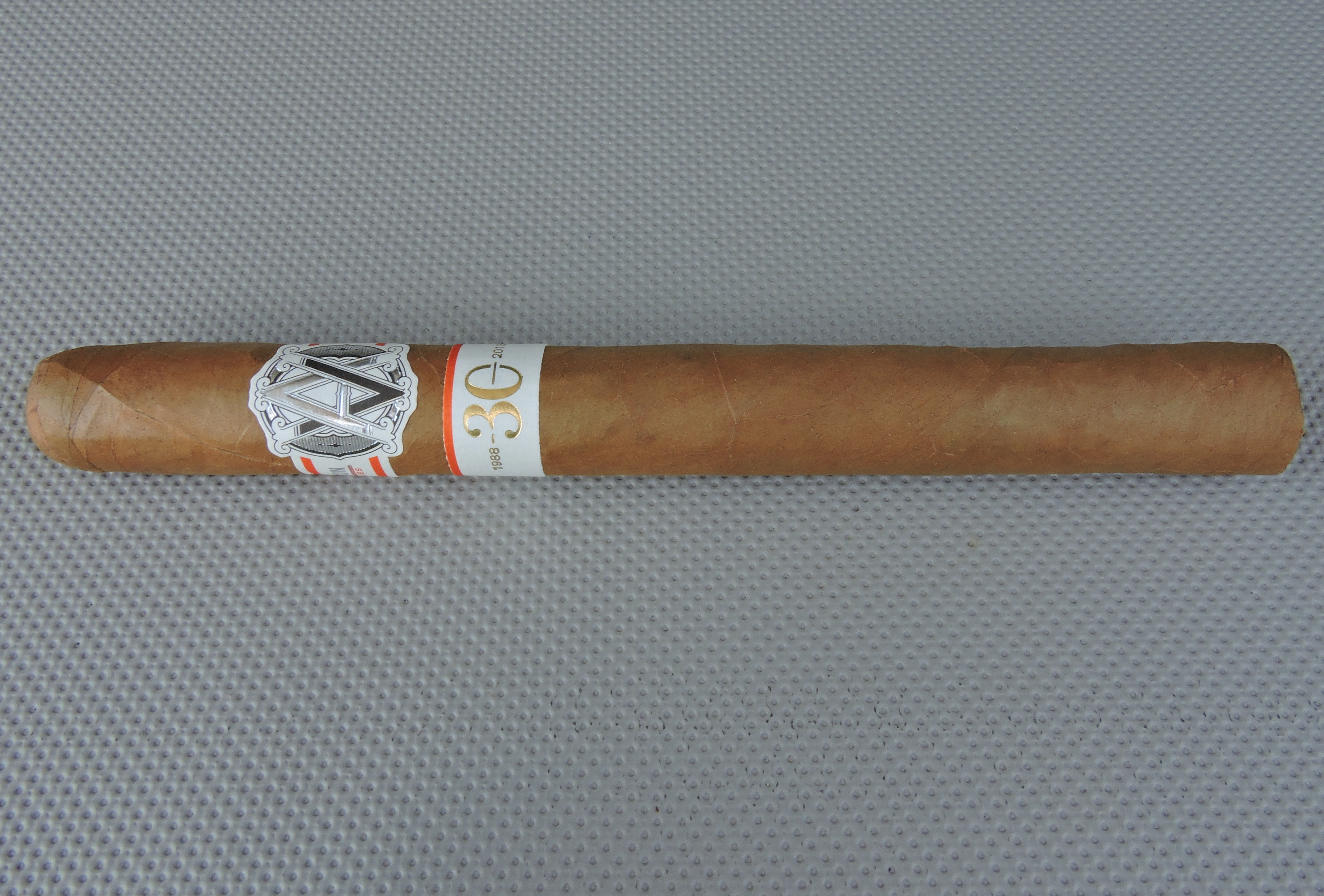 2018 marks the 30th anniversary of the AVO Cigars brand. Earlier this year, Davidoff announced plans to commemorate the 30th anniversary with a year-long series of releases. While the series mostly consists of bringing back some limited edition cigars, some discontinued cigars, and releasing some commemorative packaging, there is one new release that has been included – the AVO 30 Years Improvisation. The AVO Improvisation Series was first introduced in 2015 and involves drawing inspiration from previous AVO releases to create a whole new cigar. These inspirations can be either tobacco-based and/or sized based. The AVO 30 Years Improvisation draws its inspiration from the AVO Classic, the brand that started it all for AVO. This is also the sixth release in the Improvisation Series. Today we take a closer look at the AVO Improvisation 30 Years.

The year 2018 is a big one for Davidoff as the company is actually commemorating major milestones for two of its main brands. In addition to this being the AVO brand’s 30th anniversary, it is also the 50th anniversary of the Davidoff White Label brand. With AVO, the brand pre-dates Davidoff’s involvement with the brand. AVO is named for its founder, the late Avo Uvezian. It was originally founded as Bolero Cigars before it was renamed AVO. Uvezian started working with Master Blender Henke Kelner before Kelner started working with Davidoff. By 1995, Davidoff bought up distribution for the AVO brand and it has remained a staple in the Davidoff portfolio of brands.

The AVO Improvisation Series made its debut in 2015. It essentially replaced the annual AVO Limited Edition series that ran from 2001 through 2014. The first four releases used the name “AVO Classic Covers”, but last year the fifth installment just went AVO Improvisation.  As mentioned the AVO 30 Years Improvisation draws inspiration from the AVO Classic. In addition to incorporating tobaccos from that blend, it also is based on the No. 3 vitola – a 7 1/2 x 50 Double Corona. That size vitola happens to also the one used on the AVO 75th – which was the first AVO Limited Edition cigar introduced in 2001.

For completeness, the following are the six installments of the AVO Improvisation series and what it drew inspiration from.

In terms of the 30 Year Anniversary celebration with AVO Cigars, the following are the other releases that are planned with the series. Each of the releases in this series introduces a commemorative secondary AVO 30 Years ring.

Without further ado, let’s break down the AVO 30 Years Improvisation and see what this cigar brings to the table.

The AVO 30 Years uses a Dominican blend highlighted by a light Ecuadorian Marron wrapper. The specific details of what tobaccos were “improvised” from the AVO Classic have not been disclosed.

The 7 1/2 x 50 Double Corona is the one size released with the AVO 30 Years Improvisation. The cigars are packaged in 25-count white and orange boxes. The boxes simulate the texture found on Avo Uvezian’s signature hat and linen suits. There are 25 cigars per box. 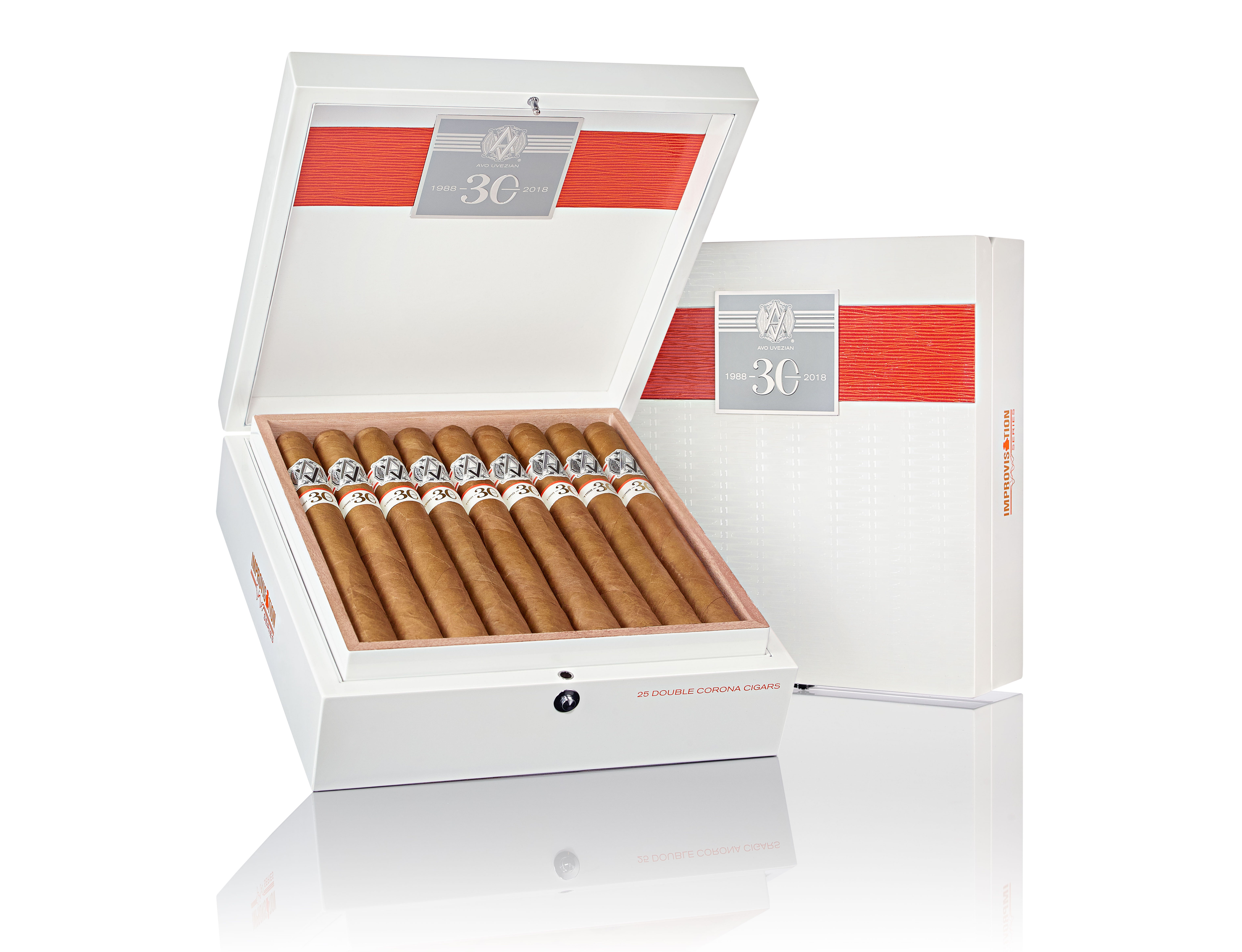 There are two bands on the AVO 30 Years Improvisation. The primary band uses a style similar to what has been seen on previous AVO releases following the 2015 revamping of the band. This band features an antique white background with orange pinstripes near the upper and lower part of the band on the sides. On the center of the band is a black, silver, and gray colored AVO logo. To the right is the text “AVO UVEZIAN” in silver font. To the left is the logo for the AVO Improvisation Series. This logo features “IMPROVISATION” in silver font with an orange Avo Uvezian Silhouette being used in place of the letter “A”. Below that is the text “SERIES” in small orange font.

The secondary band is a ring that is being used across all of the releases that are a part of the AVO 30th series. The band has an antique white color with an orange pinstripe along the lower edge. There is a large gold colored 30 on the center of the band. A small gold colored 1988 and 2018 flank each side of the 30.

After using a straight cut to remove the cap of the AVO 30 Years Improvisation, I moved on to the pre-light draw ritual. The cold draw delivered a mix of cedar, classic wood, cream, and a citrus. I considered this to be a satisfactory pre-light draw experience. At this point, I was ready to light up the AVO 30 Years Improvisation and await what the smoking phase would have in store.

The AVO 30 Years Improvisation opened up with notes of cream, cedar, classic wood, and some black pepper. It didn’t take long for the citrus notes to become the primary ones. There was a nice sweetness to the citrus that was not overpowering. The cream, cedar, classic wood, and black pepper notes all settled into the background. The retro-hale was not overly sharp and had a mix of cedar and citrus sweetness.

Later in the first third, the classic wood notes moved into the forefront. Simultaneously, some hay notes also surfaced in the forefront. It was at this point where the citrus sweetness began to change and move to more of an orange rind flavor. This basically imparted some bitterness into the equation, but it didn’t sacrifice all of the citrus sweetness. By the midway point, the orange rind, classic wood and hay notes were in the forefront. These notes were complemented by the cedar, pepper, and a touch of cream in the background.

The flavor profile didn’t radically change in the second half. For the most part, the orange rind and classic wood notes remained primary. The hay notes moved into the background and joined the cedar and pepper notes. There was a slight increase in pepper during the second half. By the start of the last third, the cream notes had dissipated. This is the way the AVO 30 Years Improvisation closed out. The resulting nub was soft to the touch and cool in temperature.

The burn scored very nicely on the AVO 30 Years Improvisation. This cigar maintained a straight burn path from start to finish. There was a slight curvature on the burn line from time to time, but this was remedied by the occasional touch-up. The touch-ups required were not frequent and there was no point where this cigar was in danger of getting off track. The resulting ash was firm with a salt and pepper color scheme to it. The burn rate and burn temperature remained ideal from start to finish. 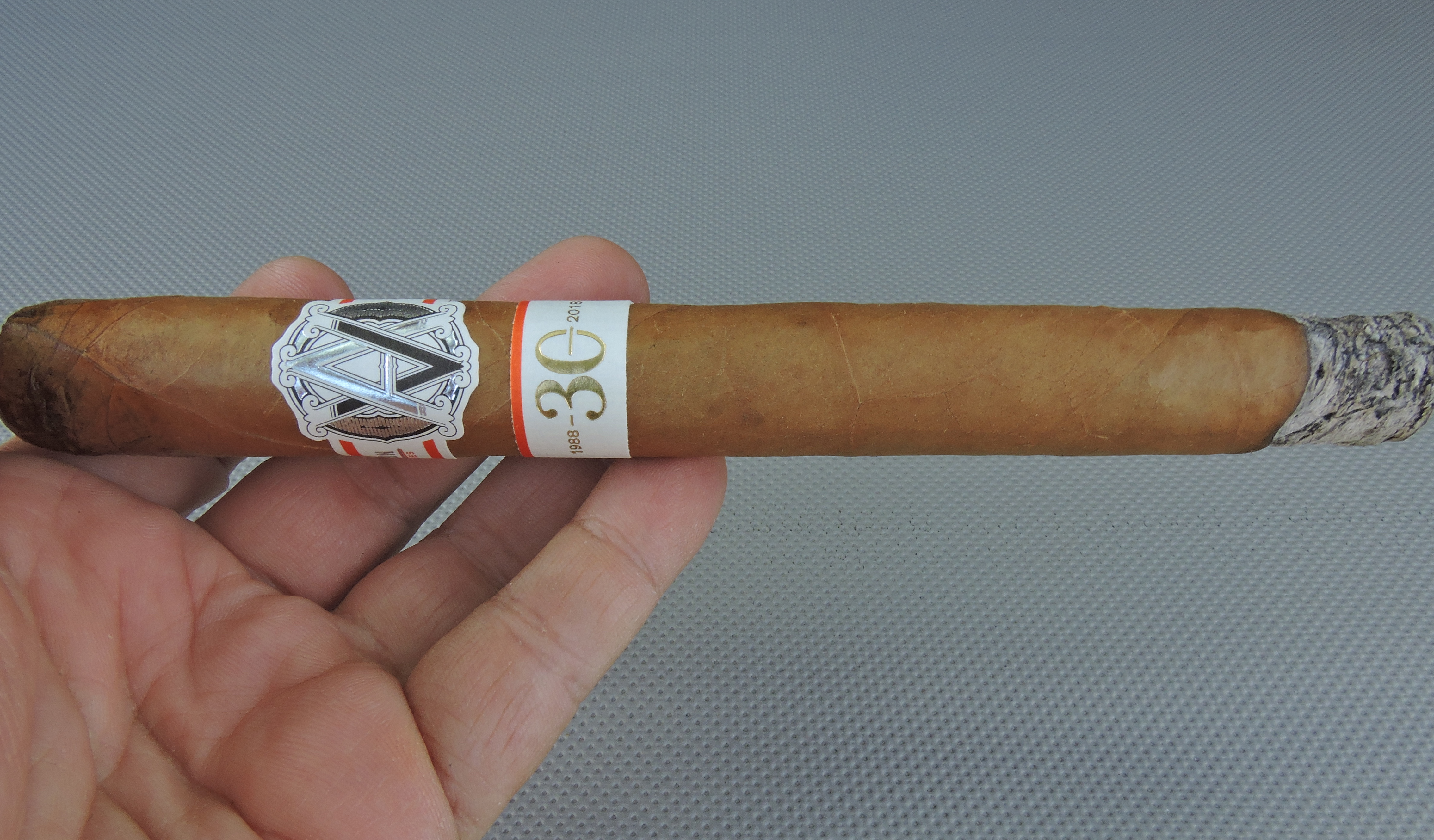 Burn of the AVO 30 Years Improvisation

The draw to the AVO 30 Years Improvisation leaned toward the open side. Normally I like a little more resistance on the draw. But this didn’t result in any adverse effects other than a minor impact to the enjoyment of my cigar experience.

This is quite a dialed back cigar – even by AVO brand standards (known for milder cigars). The strength level of this cigar started out mild. Toward the end of the second third, the strength finally creeps up enough to move into mild to medium territory. Meanwhile, the body does have a little more depth. This is a cigar that started out mild to medium-bodied. Like the strength, the body does increase before the start of the last third and intensifies just enough to move into medium territory.

While this is a milder cigar, I found that the milder strength and milder body of the AVO 30 Years Improvisation actually worked in favor of this cigar. A lot of times with longer cigars like double coronas, lanceros, and churchills, the cigar “runs out of gas” in terms of delivering flavors. In the case of this cigar, there was no problem with this double corona. In terms of the flavors, I liked the first half much better than the second half.  While I thought the cigar maintained a good balance of sweetness and spice, some of the bitterness that surfaced just before the midway point did not have an overall positive effect on the smoking experience.

At $16.00, the AVO 30 Years Improvisation is not an inexpensive cigar. It’s a cigar I’d recommend to a novice or experienced cigar enthusiast looking for a dialed back cigar. If someone is a fan of the AVO Classic, I do believe this cigar is for that person. As for myself, I’m curious to see how this cigar performs with some longer-term aging. It’s still got enough going on where I would buy one and smoke it again.